Should I Worry About... African swine fever on the rise in Europe?
Arij Limam and Gary Parkinson 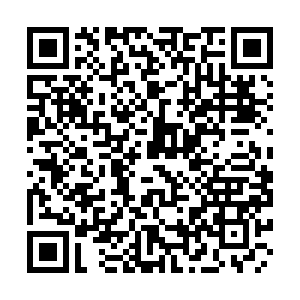 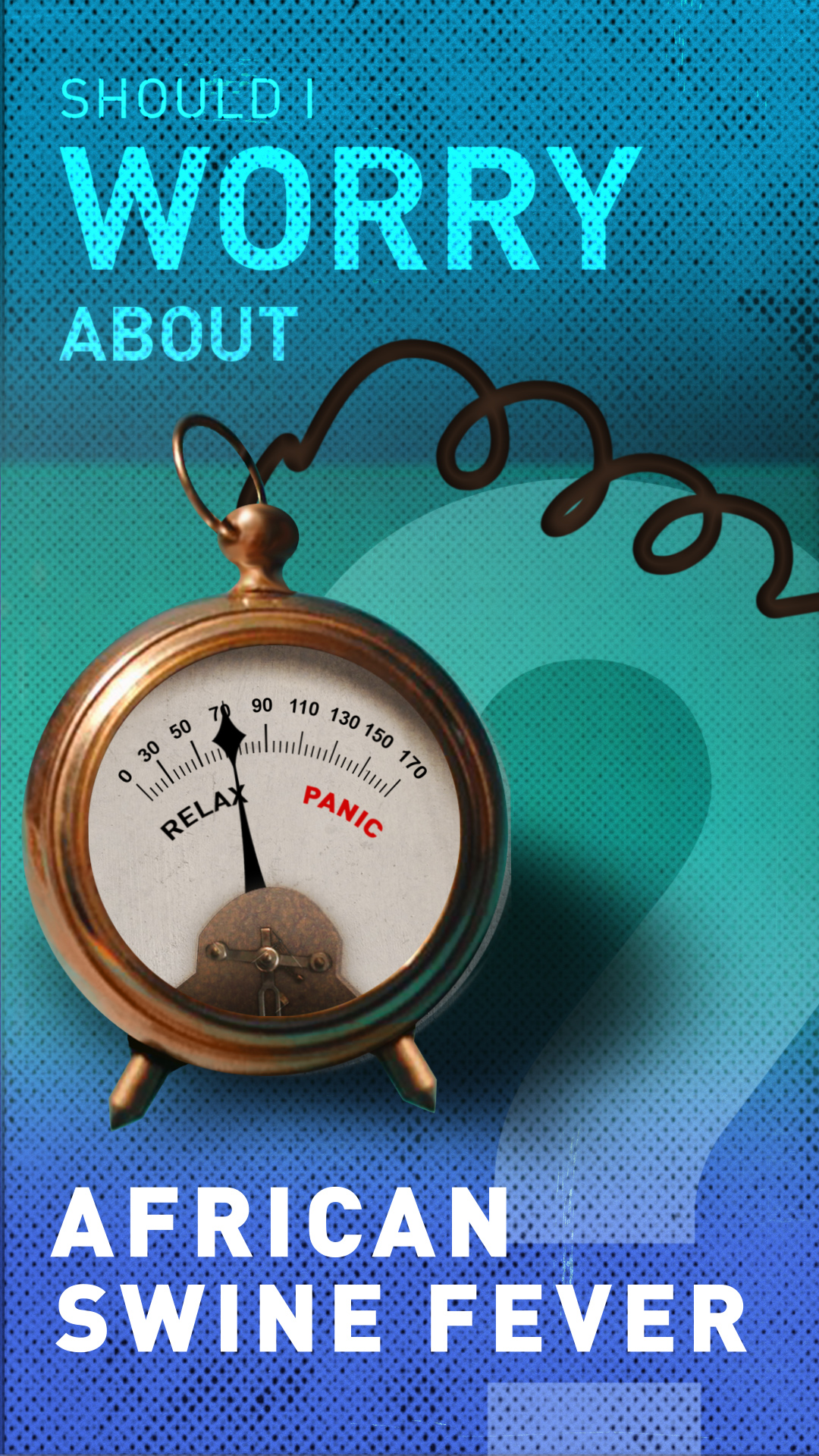 COVID-19 has dominated the headlines since its outbreak in December 2019, and rightly so, given its global impact on human health, with cases now nearing 23 million worldwide to date.

But there's another virus that some experts are saying we should be wary of, which is on the rise in Europe: African swine fever (ASF). In fact, scientists say cases of this viral infection among wild boar on the continent increased by as much as 85 percent in the first quarter of this year compared with the whole of 2019.

Though this virus may not be as widely known as the H1N1 virus, which caused a worldwide pandemic in 2009, it is a disease that has a high mortality rate and no vaccines or treatments. It could have severe consequences for society and economies in Europe.

However, ASF is a different disease from swine flu. The virus is not transmissible from animals to humans, meaning there is no direct impact on human health, so there is no need to panic just yet. But, it is still "a highly contagious hemorrhagic viral disease of domestic and wild pigs, which is responsible for serious economic and production losses," according to the World Organisation for Animal Health, or OIE.

"ASF cases in wild boar will already affect the keeping of domestic pigs and trade of pigs and their products. Regular checks, requirements to keep pigs indoors, and checks prior to any movements will be implemented," Sandra Blome, senior scientist at the Friedrich-Loeffler-Institut (FLI) in Germany, told CGTN Europe.

• Are farming methods causing an increase in viruses like COVID-19? 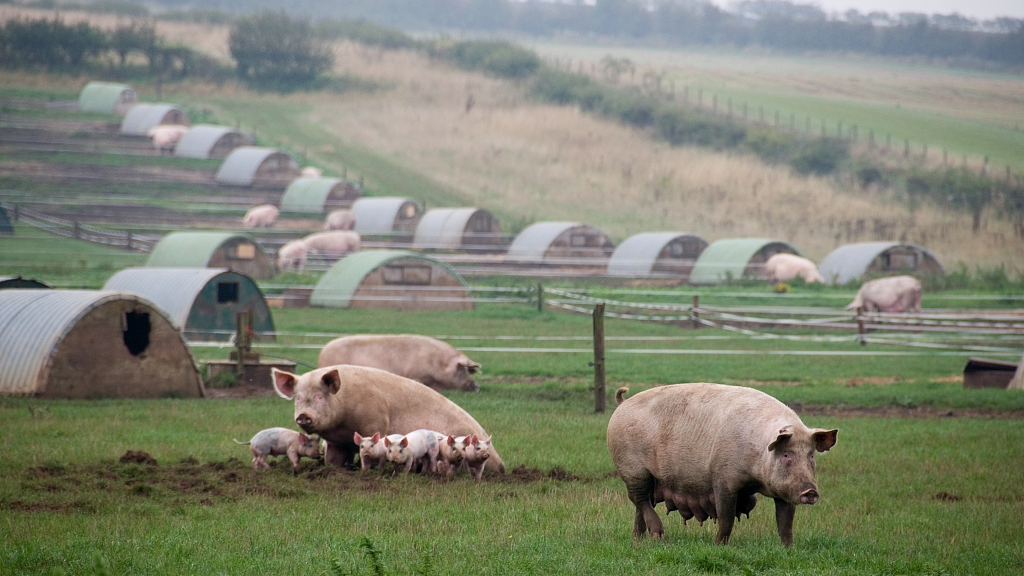 The risk of transmission of ASF from wild boar to farmed pigs is very high. /Ingram/VCG

The risk of transmission of ASF from wild boar to farmed pigs is very high. /Ingram/VCG

ASF is not a new disease, in fact, it has been around for decades and has made its way around several continents, including Europe, affecting various pig species.

"The disease first jumped out of Africa in 2007 into Georgia and ever since has been spreading throughout the Caucasus, Russia, Eastern Europe, all the way into Central Europe and even into Belgium," Daniel Beltran-Alcrudo, a veterinary epidemiologist, explained to CGTN Europe.

According to a report published by the European Food Safety Authority (EFSA) early this year, the area of the European Union (EU) affected by ASF expanded progressively in 2019 and so far, 10 countries in Europe continue to be affected.

More recently, figures from the European Commission's Animal Disease Notification System (ADNS), which documents the situation of important infectious animal diseases, show that ASF cases in wild boar specifically have been on a steep increase.

The data show that during the first quarter of 2020, in the whole of the EU, 4,085 infected wild boar were found. This roughly equates to 60 percent of what was found in the whole of 2019. Poland and Hungary even record figures higher than 70 percent of the total amount of animals found in 2019. In Romania, that percentage reached 56 percent. 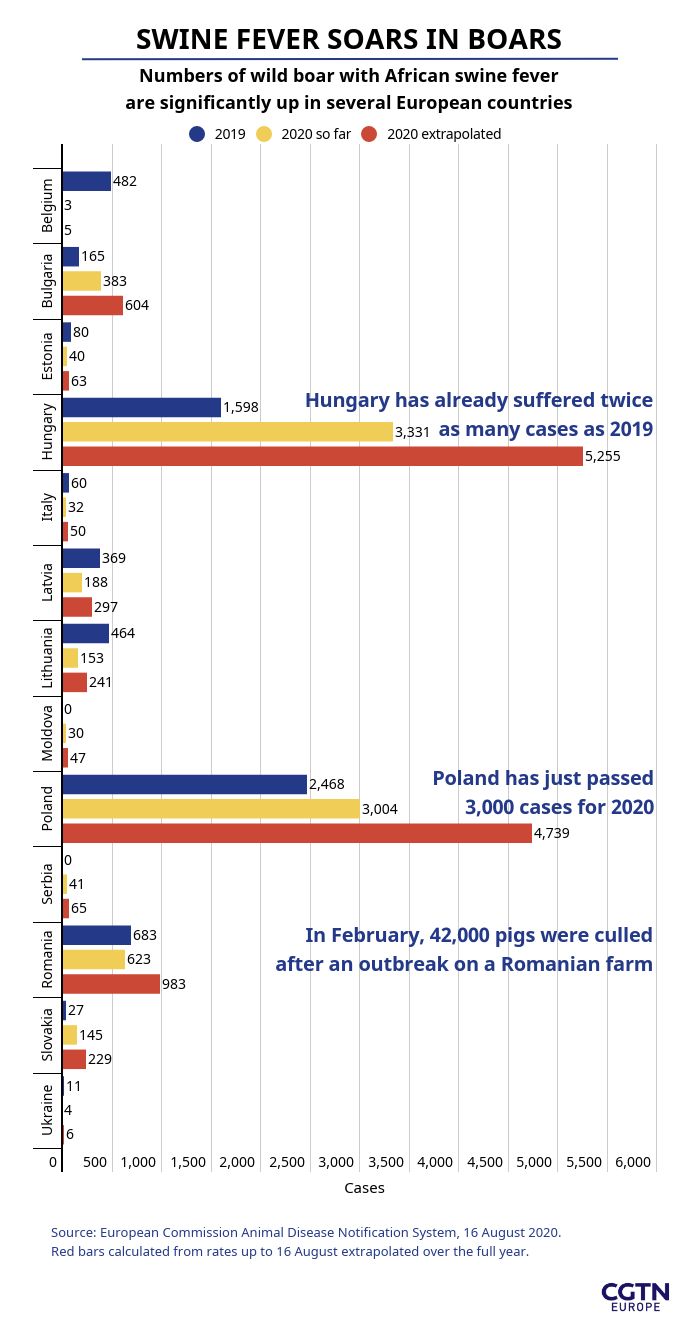 "Due to the spread of the disease in wild boar populations and the limited number of control measures available, ASF does represent a challenge for the whole EU agricultural sector, in particular the pig farming industry and producers," Sofie Dhollander, scientific officer in the Animal Health and Welfare Unit of EFSA, explained to CGTN Europe.

Scientists and animal disease experts have expressed concern that there is a risk of disease transmission from wild boars to pig farms and that it can happen very easily.

"Because where the disease at the moment is mostly maintained in wild boar populations, there are continuous spillovers or jumps into the domestic pigs," added Beltran-Alcrudo, who is an animal health officer at the Food and Agriculture Organization (FAO) of the United Nations' regional office for Europe and Central Asia.

Smallholder pig farms or backyard producers are thought to be the most at risk, particularly in areas near forests, where the wild boar population is high, as the infected wild boar can easily come into physical contact with domestic pigs when they are roaming around with no biosecurity measures in place, or even leave traces of the disease on farm instruments, feed or bedding used by the pigs.

But even large farms that isolate their pigs are not safe, as the disease can also be carried and spread through human activity.

"For example, if one of the employees likes to hunt wild boars and this was infected, he can bring the virus into the farms through his clothes – or even worse, in his lunchbox," Eran Raizman, senior animal health and production officer at the FAO, told CGTN Europe.

The virus can also last longer on carcasses, especially in colder temperatures, so "contact with illegal disposed carcasses of wild boar by farmers or hunters are also considered to significantly contribute to the spread of the disease," said Dhollander. 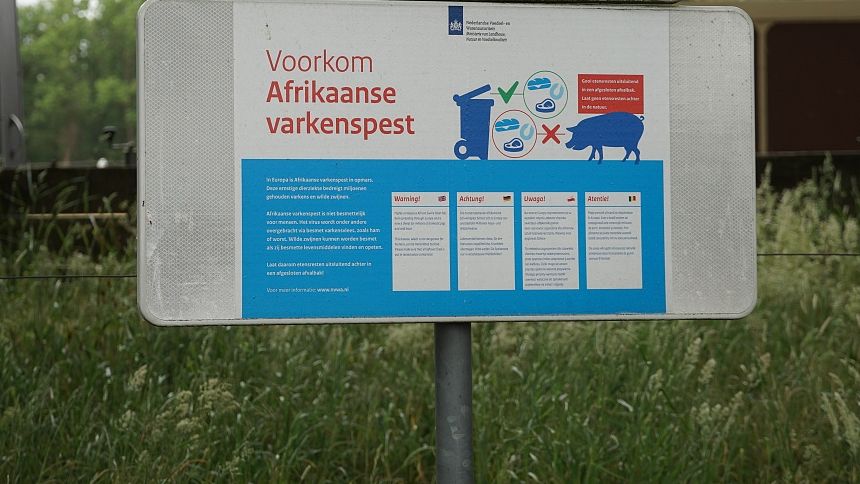 Signs in farms in the Netherlands help inform farmers and visitors about how to minimize the spread of the virus. /Dafinchi/Getty via VCG

Signs in farms in the Netherlands help inform farmers and visitors about how to minimize the spread of the virus. /Dafinchi/Getty via VCG

With no monitoring or strict measures in place, the transmission of this disease can cause severe consequences to the whole pig farming industry, which in several European countries, is a very large and profitable one.

And it's not just the producers who are concerned – for consumers, the spread of ASF could inflate the price of pork or even lead to severe shortages and impact food security.

"There is no need to think about the worst case, because long before it, the harm that this virus can cause to the livelihood and food security of not only pig producers but the population at large is tremendous," Raizman warned.

In February this year, 42,000 pigs were culled after ASF was found on the premises of a commercial farm in Argeş county, about 80 kilometers west of Romania's capital Bucharest, as reported by the World Organization for Animal Health (OIE).

Romania has been battling with ASF on pig farms ever since the first outbreak in 2017. More than 600,000 pigs have been culled in the country so far because of the disease, causing devastation for affected households that rely on their income from the pig farms. The main hypothesis of the Romanian authorities is that the virus was first spread by wild boars coming from an unspecified neighboring country.

Similarly, Poland has had to cull tens of thousands of pigs since it recorded its first outbreak in 2014. The country, which is a major pig producer, has battled two outbreaks so far this year originating from wild boar, the latest in the Poznań region, an important center of pig farming, and the earlier outbreak taking place only 12 kilometers from the border with Germany.

Germany, Europe's top pork producer with approximately 26 million pigs, and the EU's second largest pork exporter to non-EU markets after Spain, raised concerns about the situation in Poland. Fearing a spread of the disease, it recently added a 62 kilometer extension to the 240 kilometer fence along its border with Poland – more than half its total length – erected earlier this year in an effort to prevent ASF spreading into the country through roaming wild boars.

For many, the worst-case scenario would be the spread of the disease into European countries such as Germany, Spain, Denmark or Holland, which have large pig populations. This would also result in damage to the balance sheets of pork exporters.

"Perhaps one of the most important economic losses related to the presence of AS,F results from trade bans once a country gets infected," Beltran-Alcrudo explained. "This is particularly worrisome for exporting countries. Borders may remain closed for months or even years, thus leading to exporting countries to lose their export markets," he added. 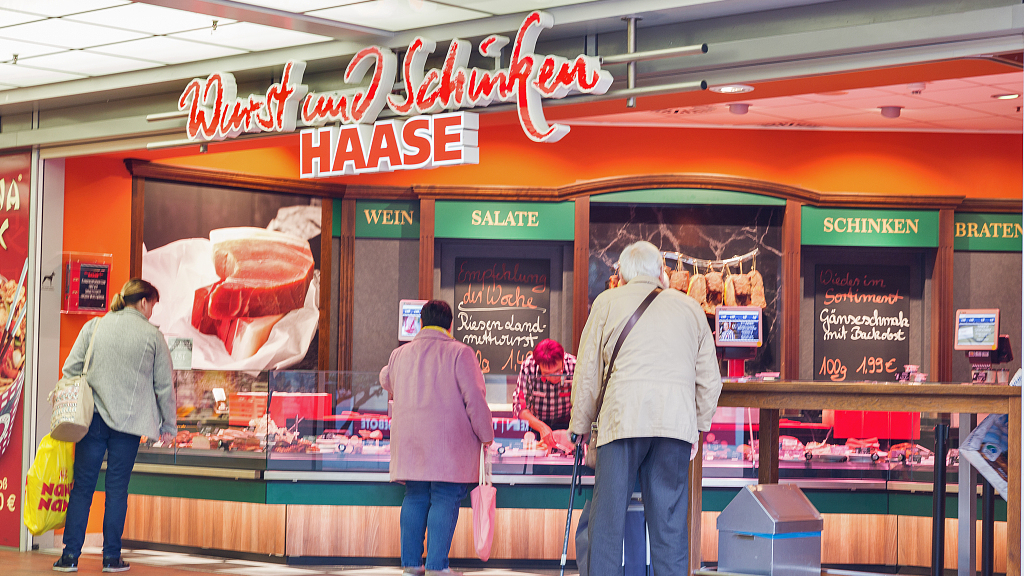 Germany is Europe's top pork producer, so fears the impact of the spread of ASF in the country. /Panama7/Getty via VCG

Germany is Europe's top pork producer, so fears the impact of the spread of ASF in the country. /Panama7/Getty via VCG

While the disease continues to spread across the continent, sometimes undetected, animal health experts and scientists say more action needs to be taken on a wider scale to ensure the socio-economic damage caused by the disease is not catastrophic.

As there are still no vaccines or cures for ASF available at present, experts and organizations monitoring animal health in Europe, such as the EFSA and the FAO, suggest certain measures be taken by the actors involved, some of which are tried and tested.

"Surveillance activities, like testing for virus detection wild boars and domestic pigs that are found sick or dead, are key, as it remains the most effective means for early detection of ASF," the EFSA's Dhollander said.

Increased testing on samples of infected wild boar using the PCR technique, like that used in COVID-19 cases, gives a better picture of the prevalence and geographic spread of the disease, according to the FAO, but is often difficult to manage in certain countries with limited resources.

Another measure recommended by these organizations is ensuring strict biosecurity in pig farms, this includes putting up fences and increasing the disinfection of spaces in the farm, as well as people entering it. But this, too, could face limited implementation because of the cost.

"This often requires some investment and in the absence of good access to finance, smallholders do not invest in better infrastructure, such as fences that can protect the pigs. Hence, clear supporting policies must be in place, whether with the support of the big industries or only the government," Eran Raizman explained.

But perhaps the most important measure that these organizations recommend and carry out, is raising awareness among hunters and farmers on how to prevent the spread of the virus. This is often done through training, books, leaflets and other available publications. 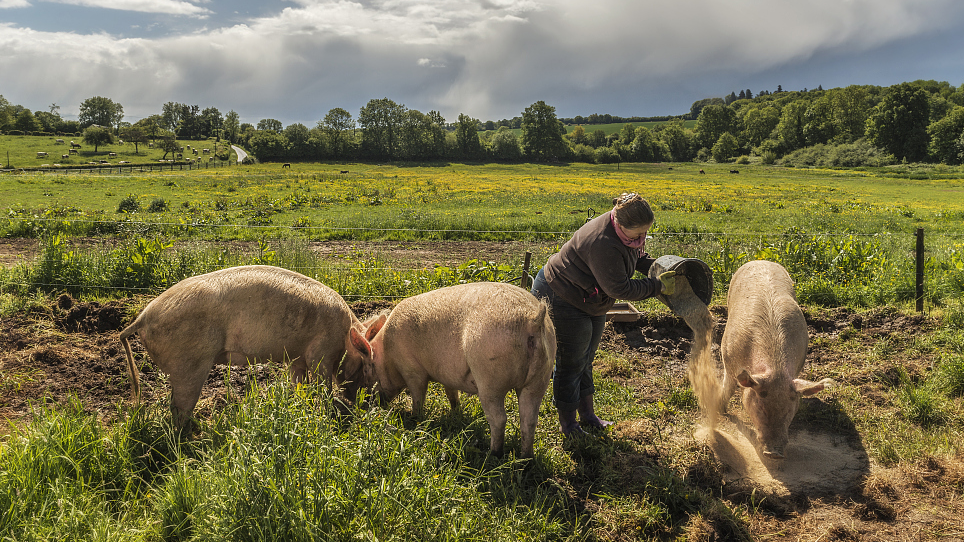 Raising awareness among pig farmers about the transmission of ASF could help minimize its spread. /Eric Larrayadieu/Getty via VCG

Raising awareness among pig farmers about the transmission of ASF could help minimize its spread. /Eric Larrayadieu/Getty via VCG

Some of these tried and tested measures have proven successful in certain countries that appear to be doing better in terms of virus levels this year compared with last year.

Belgium, which suffered its first ASF outbreak in 2018, has recorded a very low rate of the disease present this year compared with the rate in 2019.

"In Belgium, the lower rate of infection in wild boar is due to the fact that the infection was identified relatively early and kept under control in a relatively small area, as it happened with Czechia before," Beltran-Alcrudo said. "The aggressive control measures implemented – fencing, hunting, active search of carcasses – has likely been successful in halting the spread of the virus," he added.

However, scientists say every region or country differs when it comes to how diseases are spread, so different measures are recommended depending on the epidemiology of the area.

But in order to avoid the worst-case scenario in Europe, which would result in the mass culling of millions of domestic pigs – as was witnessed in China, with its hog herd, by far the world's largest, shrinking last year by around 180 million pigs, or 40 percent, after the incurable disease decimated farms – urgent steps need to be taken.

"Complying with the existing EU legislation is of utmost importance in order to increase animal welfare where possible and reduce practices causing animals' pain, distress and suffering," Dhollander said.