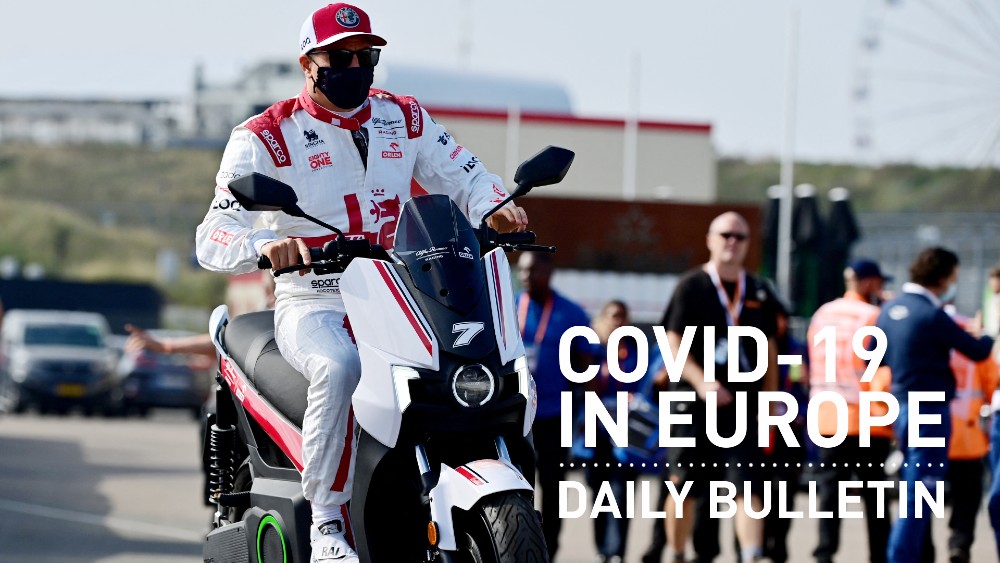 · The UK government is set to decide if all children aged between 12 and 15 will be given COVID-19 vaccinations, after its official advisory committee on vaccines said the "marginal" benefits of expanding the program "is considered too small to support universal vaccination of healthy 12- to 15-year-olds." The advisory body, however, says it does not look at the wider societal or educational benefits of vaccination and says that the government will want to consider those issues. A final decision is set to be made early next week.

· Spain's two-week COVID-19 rate fell below 200 cases per 100,000 inhabitants for the first time in more than two months, according to health ministry data. The 14-day rate was 198, the first time it has dipped below 200 cases since July 2. More than 70 percent of the adult population is now fully vaccinated, while 39.4 percent of people aged 12 to 19 have received both doses of a vaccine.

· France could ease health pass restrictions because they are hurting the activity of large shopping malls, if the COVID-19 epidemic situation keeps improving, Labor Minister Elisabeth Borne said on Saturday in an interview with France Inter radio.

· Alfa Romeo Formula One driver Kimi Raikkonen has tested positive for COVID-19 and will miss this weekend's Dutch Grand Prix at Zandvoort. The Finnish driver, 41, who announced his retirement from F1 this week, will be replaced for the race by Alfa Romeo's reserve Robert Kubica.

· New Zealand recorded its first COVID-19-related death in six months Saturday, but health authorities said there were signs the outbreak of the highly infectious Delta variant was coming under control. A woman in her 90s, who had underlying health conditions and could not receive a ventilator or intensive care support, died in an Auckland hospital on Friday. She is the 27th person to die with COVID-19 in New Zealand.

The UK government believes there is a "strong case" for vaccinating healthy children aged 12-15. A decision is expected within days, after the Chief Medical Officers of each of the four nations have advised the governments across the UK. Scientists on the Joint Committee on Vaccination and Immunisation have said providing the jab to schoolchildren of that age would only have "marginal" gains.

The JCVI did recommend vaccination for children with underlying health conditions. Ministers have already said they are keen to extend the vaccination program, arguing there's a bigger benefit to reduce disruption to education and schools this autumn.

But six million adults in the UK are still yet to receive any COVID-19 jab.

In London there was another large anti-vaccine demonstration and four police officers were injured on Friday. The Metropolitan Police had to defend the Medicines and Healthcare products Regulatory Agency headquarters from protestors trying to enter. Ten people were arrested.

Ireland now has the highest rate of COVID-19 infections in the EU, according to new figures from the European Center for Disease Control.

Malta previously occupied the top spot, but with a 14-day rolling average infection rate of 504 cases per 100,000 people, Ireland has now taken over.

There are 353 people in hospital across Ireland, with 55 receiving intensive care. But the number of deaths caused by the virus remains relatively low, which is perhaps down to the country's successful vaccination drive.

Nearly 90 percent of all people aged 16 and above have been fully vaccinated.

New figures released in Brussels this week showed a steady average of 2,000 new infections per day in the last weeks of August. During the same period, an average of five people died each day from the virus.

Although the increase in infections is steady, the number of patients admitted to hospital has begun to rise again. Some 65 adults were admitted each day in the past week, an increase of 12 percent on the week. There are 677 COVID-19 patients in hospital in Belgium.

Prime Minister De Croo said the next "Consultative Committee" meeting on COVID-19 restrictions would be held on September 17, and would focus on extending the use of vaccine passports (or Covid Safe Ticket, CST) as they are known locally. Some want CSTs to extend to bars and restaurants, as they do in France.