· The UK will open some of its borders to fully vaccinated visitors from the U.S. and Europe as early as next week. Travelers can come to England, although decisions in Wales, Scotland and Northern Ireland will be taken separately. It opens the door for a revival of travel firms, and airlines' share prices bounced on the news.

· However, a French minister accused the UK of "discrimination" against French people, after the update to travel restrictions left the country off the "no quarantine" list. "It is excessive and makes no sense in terms of health policy," said Europe Minister Clement Beaune.

· Russia reported 799 deaths on Thursday. It's the third time in the past month the country has posted a record high count. Authorities blamed the surge on the more infectious Delta variant.

· The EU has signed a contract with GlaxoSmithKline for 220,000 doses of its experimental antibody treatment. The drug is said to help stop mild COVID-19 cases developing worse conditions in at-risk patients.

· Norway has delayed the final step of its plan to fully relax restrictions for a second time. The Oslo government said the fast spread of the Delta variant caused the pause, which will be assessed in mid-August, according to Health Minister Bent Hoie. Gatherings remain limited to 20 people.

· German car-making group Volkswagen has lowered its delivery expectations for the remainder of the year due to the worsening shortage of silicon chips needed for computers in its cars.

· Pharmaceutical giant AstraZeneca said its COVID-19 vaccine has earned the company $1.2 billion in the first half of 2021. It has already shipped 319 million doses this year. The jabs are sold at cost and AstraZeneca said it's not making a profit from the drug. Despite safety fears, a paper published on Wednesday showed no added risk of blood clots from the jabs.

· Meanwhile, AstraZeneca said it hopes to conclude its legal dispute with the EU over vaccine deliveries in "the next few weeks," according to a senior executive, who told Reuters a "settlement" is close.

· Finally, the European soccer sector contracted for the first time since the 2008 Global Financial Crisis. Clubs were affected by bans on supporters at matches across the continent. A review has highlighted an 11 percent drop in revenues across Europe's top five leagues. But wage bills still grew by 4 percent in the UK's Premier League, putting some clubs under financial strain. 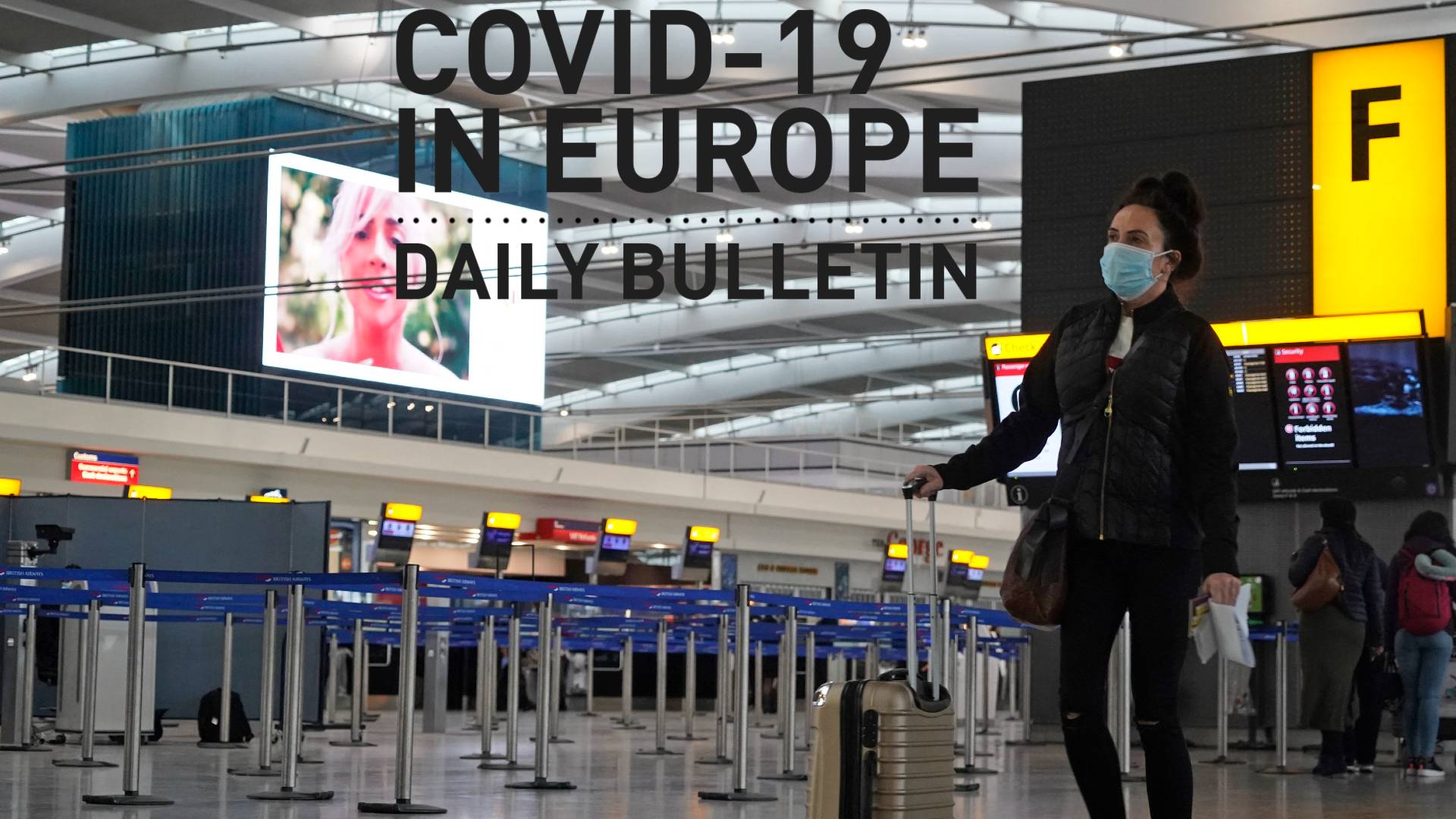 London's Heathrow Airport could be much busier from next week after England relaxed quarantine restrictions. /Niklas Halle'n / AFP

London's Heathrow Airport could be much busier from next week after England relaxed quarantine restrictions. /Niklas Halle'n / AFP

Authorities in Slovakia say the third wave of COVID-19 has begun. Restrictions remain mild with all the country still in the "green tier" but the epidemiological situation is deteriorating. The reproduction number is now over one, with the average number of new cases reported growing on a weekly basis. The health ministry says the rise in infections is due to the spread of the Delta variant, and urged Slovaks to get vaccinated.

Czechia event organizers are preparing for an increase in the number of guests allowed at indoor and outdoor events from Sunday. Organizers will be expected to check attendees are fully vaccinated against COVID-19 or have recovered in the previous 180 days. Outdoor seated arts or sports events can be attended by up to 7,000 people, while up to 3,000 are allowed to attend indoors events and dancing will again be allowed in nightclubs.

On Thursday, the UK government announced fully vaccinated travelers from Europe and the U.S. will be able to enter the country without quarantine. The news provided a huge boost to the tourism and aviation industry, which has been lobbying for a change for months.

Meanwhile Foreign Secretary Dominic Raab, told local media he's "increasingly confident" more countries will be added to the green and amber lists of countries and international travel will continue to open up in the future. The tourism industry fears Spain will be taken off the amber list.

Belgium's federal parliament has passed a new "pandemic law," which will give police officers extra powers during crisis situations. The government also gets the power to declare a three-month state of health emergency, while governors and mayors have the legal right to close certain businesses and limit social gatherings.

This comes after a Belgian court in May ordered the government to halt all of its COVID-19 measures because it failed to establish a proper legal basis for them. The government was given 30 days to come up with a new solution, or potentially face hundreds of thousands of dollars in fines.

The French Caribbean island of Martinique is going back into lockdown for three weeks due to the fourth wave of COVID-19 cases. A 9 p.m. to 5 a.m. curfew and a 10km travel limit will be imposed from this weekend. Restaurants must close and permission forms will be needed once again.

Martinique is the hardest-hit part of France, but Guadeloupe, another French island in the Caribbean, is also bringing back a curfew.

The French public health agency said the Moderna shot can be authorized for use for teenagers.