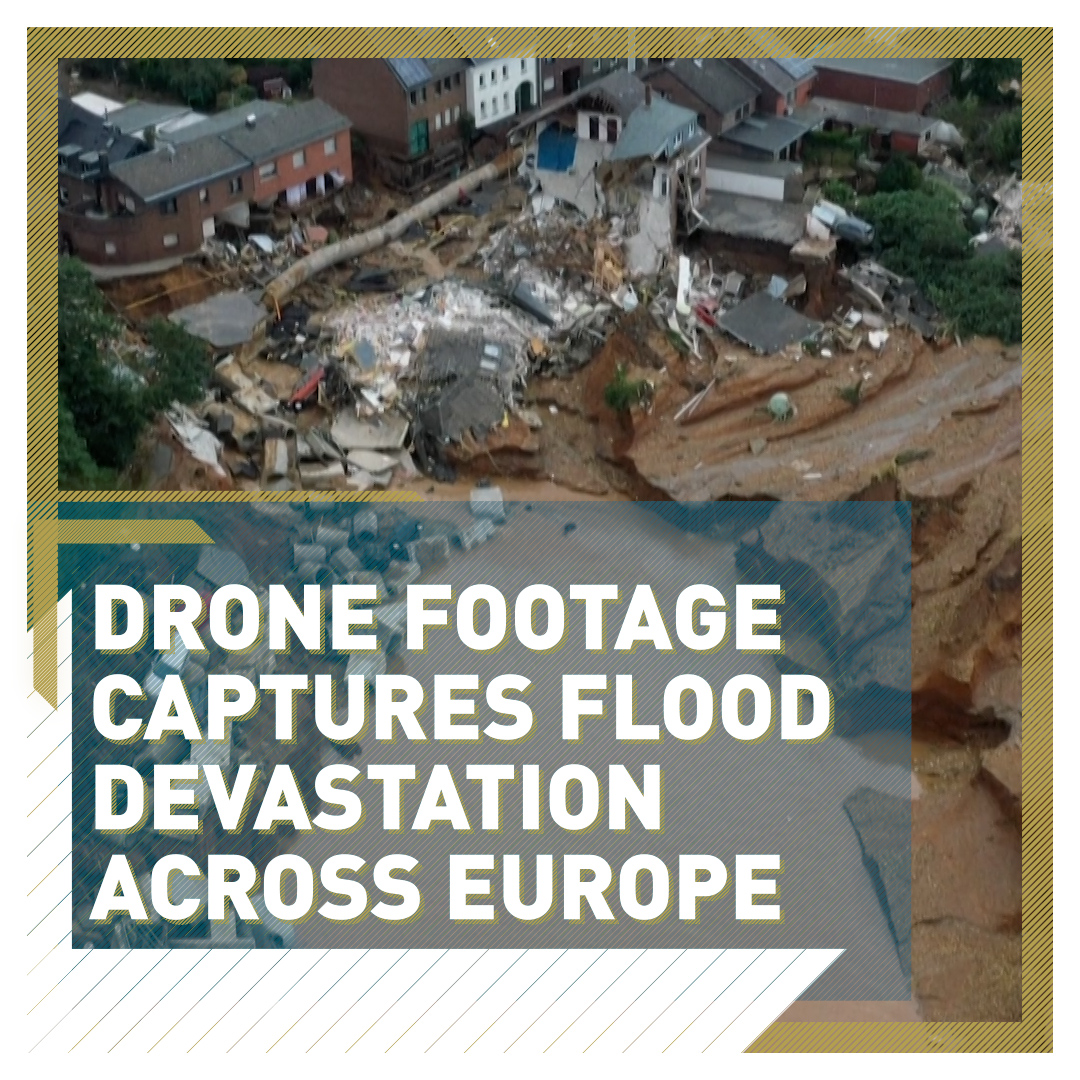 Flash floods across parts of western Europe have wreaked havoc in recent days with dozens of people killed, homes ruined and areas still under water.

With the clean-up in its early stages, it remains unclear as to the full extent of the damage caused by the heavy downpours.

Drone footage from Germany, Belgium and the Netherlands captures just how much damage has been caused to affected areas. 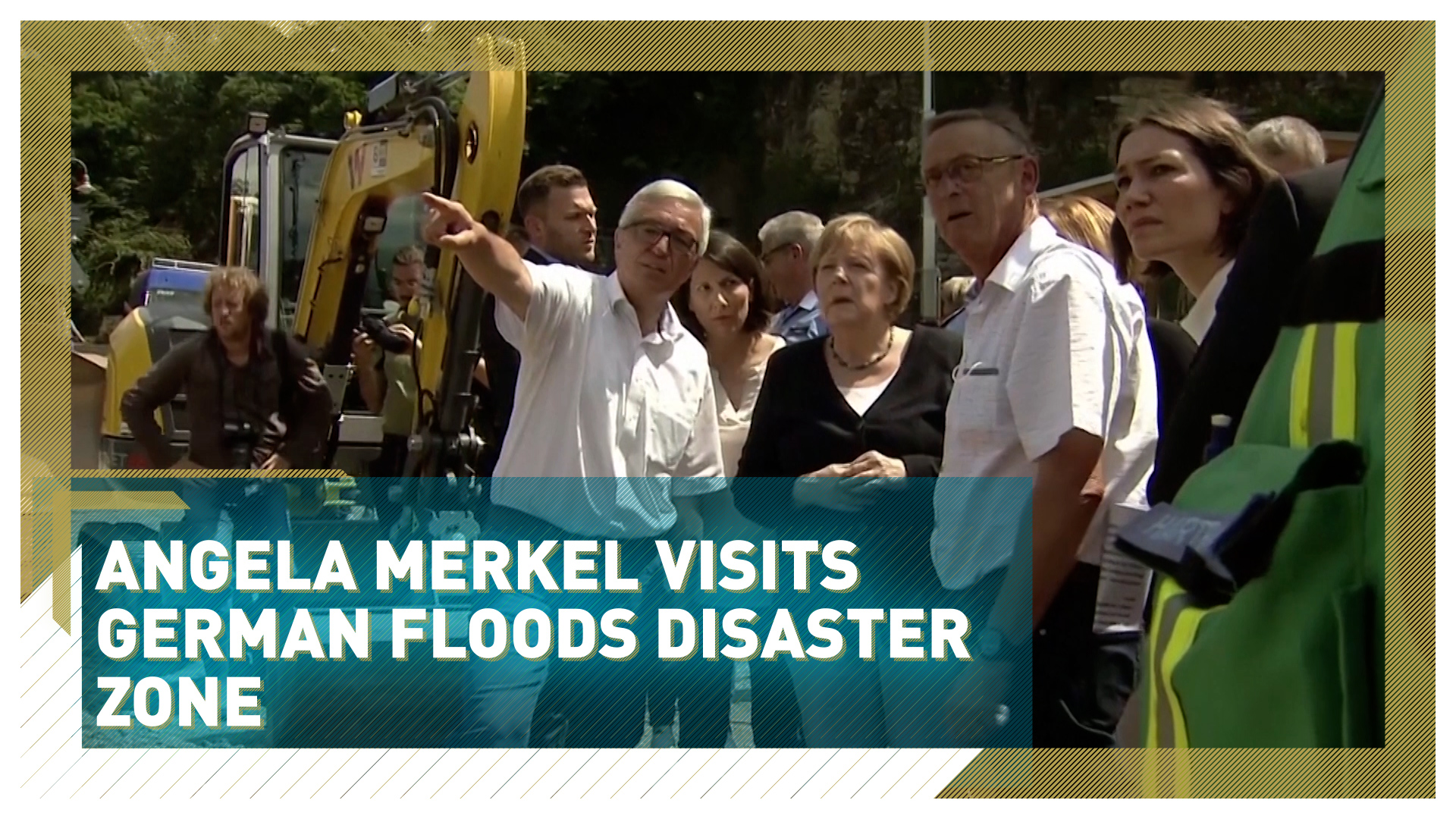 A major clean-up operation remains underway in northwest Germany as waters begin to recede from the flash floods, which first started to lash the region Wednesday. Visiting the disaster zone on Sunday, Chancellor Angela Merkel said she was shocked at the level of destruction.

"It's frightening," she said. "I almost want to say that the German language hardly knows any words for the devastation here. However what I have also seen is incredibly comforting, how people are sticking together, how they are helping each other and the solidarity that is here."

As authorities worked to clear rubble in the states of Rhineland-Palatinate and North Rhine-Westphalia, a new emergency emerged further south, with fresh downpours leading to flash flooding in Bavaria and across the border in Austria.

Entire communities remain cut off without power and running drinking water. Concerned citizens from cities that surround the affected areas have volunteered to help with the clean-up, including in the town of Ahrweiler.

"We come from a town nearby and the moment we saw the first pictures we realized that the people here would need a lot of help because all this rubble you can see in the background won't be gone in one day. So we thought we would come here and do our bit to help out," said volunteer Felix Doetch. 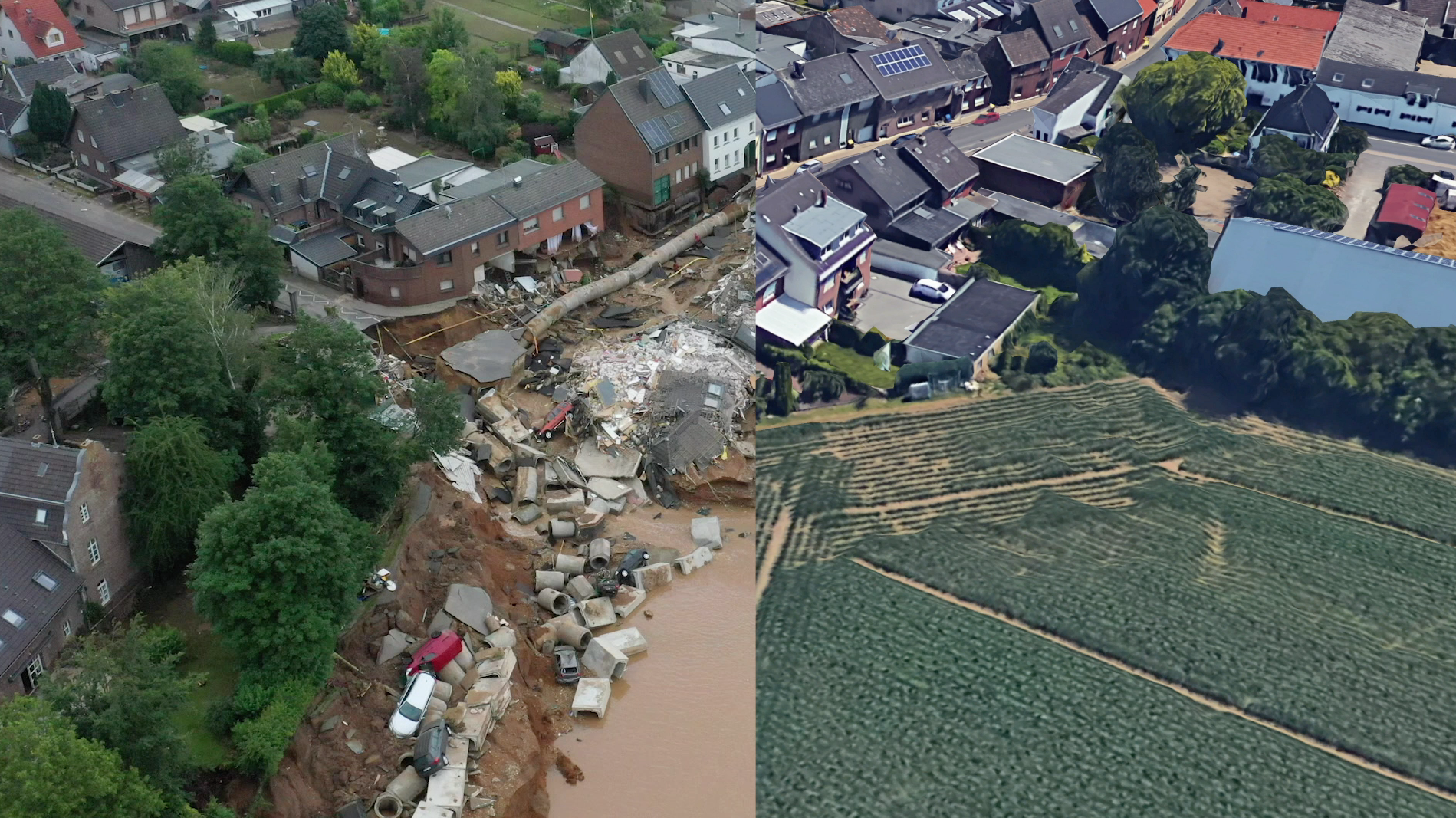 A split shot of Erftstadt-Blessem in Germany, after (left) and before (right) the flooding. /CGTN/Google Earth

A split shot of Erftstadt-Blessem in Germany, after (left) and before (right) the flooding. /CGTN/Google Earth

Engineers have inspected the Steinbachtal dam in western Germany, with authorities concerned the high volumes of water could cause it to breach. Around 4,500 people have been evacuated as a precaution.

With communities across the Netherlands, Belgium and Luxembourg also hit heavily by the floods, questions remain about whether enough early warnings were given to towns and villages in low-lying areas. The German Weather Service maintains it provided early warnings to affected municipalities.

READ MORE: Why did Europe's flood-warning system so lethally fail?

The floods have caused significant damage to critical infrastructure with roads, bridges, and electricity networks all facing multimillion-dollar repair bills. The German military has been drafted to help restore connectivity in affected areas.

Hundreds of people remain missing, and authorities are warning the death toll will likely grow as rescuers continue to comb through the destruction.

During her visit to the town of Schuld, Merkel said she would be working to ensure the government continues to provide support.

"We stand by your side," she said. "The federal government and the state will act together to bring the world back to how it was in this beautiful area. Step by step. And that means that we have to act quickly in the short term but also that recovery will take a long time."