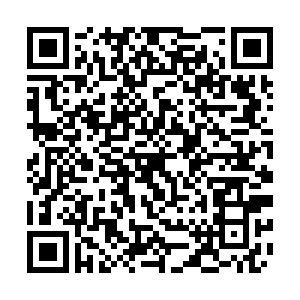 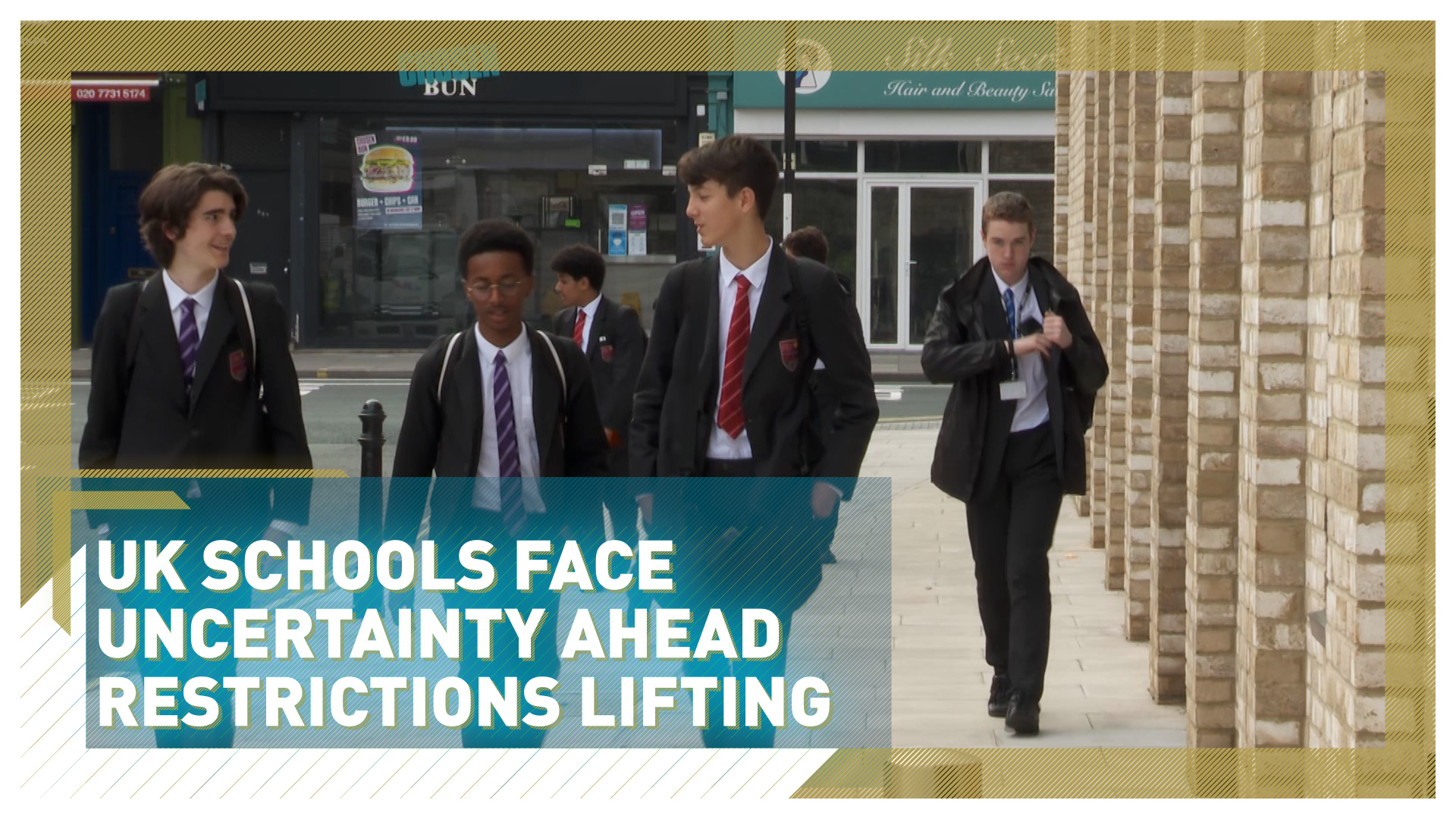 On July 19, the UK government will remove the main COVID-19 restrictions in England. The other three nations that make up the UK will follow several weeks later.

As the school year ends for the summer break, the decision will impact education when pupils prepare to return to their classrooms in August and September.

Funding has been set aside to help students catch up with their learning after a year of disruption. Pupils in English schools could receive extra tuition and face longer days to make up for some missing as many as a third of their lessons.

Fulham Boys School in west London already has a longer day than most in the UK as it operates outside the national curriculum.

"What we need to do, I think, is that they are in school as much as possible," says Ebenezer. "They are exposed to outstanding teaching.

"The good thing that might come from it now is that parents have had to be more engaged with their children's education. They've got a job to play. But I don't think it should be 'Now let's throw money at this.'"

Ebenezer is responsible for 800 boys between 11 and 18 years old at what's called a free school. It's funded directly by the government and can set its own pay for teachers, as well as amend the length of the school day and term-time.

Researchers from the University of Exeter and London's School of Economics and Political Science (LSE) have published a report this month – Learning Loss Since Lockdown: Variation Across the Home Nations – detailing the impact of the loss of learning across Britain's four nations. The most days lost were in Wales, with 66 out of 190 days, while England and Northern Ireland lost the fewest (61).

Lee Elliot Major, professor of social mobility at the University of Exeter and the report's co-author, calls for urgent action as the poorest pupils lost more learning time than their more affluent peers.

"Our analysis reveals that pupils' learning loss varies between the four home nations, partly due to historical differences in school term times and partly as a result of school closure policies," says Major.

"This shows that ministers can make a difference – but quick action is needed."

The end of bubbles

During June and July, hundreds of thousands of students in England were sent home to self-isolate as pupils within their school groups or bubbles had tested positive for COVID-19. The government is now ending the system in schools of grouping children together.

On July 5, UK Prime Minister Boris Johnson said, "We're going to move away from sending bubbles home and move away from contact isolation for people, to greatly reduce the impact on schools of COVID outbreaks." 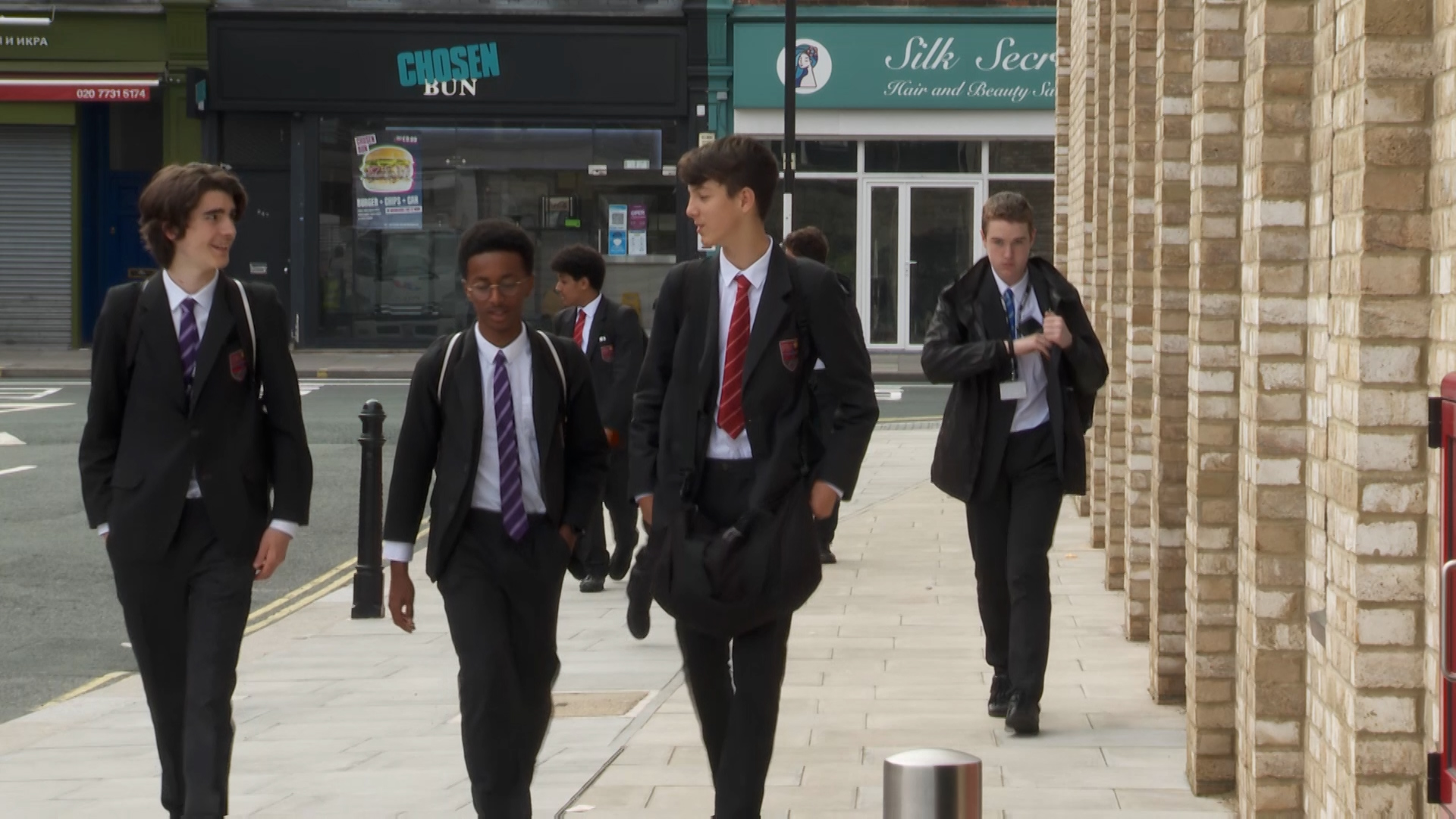 Fulham Boys School is just one establishment trying to figure out how to make up for time lost in the pandemic. /CGTN

Fulham Boys School is just one establishment trying to figure out how to make up for time lost in the pandemic. /CGTN

Only a minority of pupils came to school during the lockdowns—usually the children of key workers, such as health and care staff or vulnerable people.

Testing pupils twice weekly is set to continue after the summer break, and pupils will be expected to be at school unless they're showing symptoms of COVID-19 or tested positive come September.

Major says there's "less compelling evidence on longer school days in the UK" and says there should be a minimum school day, "as they vary hugely from one school to another. At a minimum, every parent should know how much is being spent on education at schools where their children attend."

Some of the pupils in Fulham Boys School have firm views on how the pandemic disrupted their learning.

Caleb Walker is a Year 10 student who found it hard to learn at home during the lockdowns. "It took a lot more motivation to get involved," he said, "particularly during the first lockdown when the teachers were just posting the work on the classroom – there was no connection with the teacher."

Jeremiah Totele, also in year 10, said "It's in the students' hands now, to try our best whatever we can, so we can get to where we need to be, come September."

The school's head boy Armand de Lambilly believes that repeating the school year works for some while questioning the need for extra tuition unless it's with fellow students.

"I don't think longer tuition can replicate in-class [learning]," he said. "Perhaps in some subjects, it might work – I'm thinking more of the sciences or maths – but subjects which are essay-based, especially English, politics, religious education, history, they are things where you need an opinion and being fed information by one person, I don't think is the right option."

Before resigning, the UK government's education recovery advisor Kevan Collins called for around $20 billion to be spent over three years on extra tuition and longer school days.

So far, the government has pledged just over 10 percent of that figure, $2.3 billion. But with the government determined that schools return to normal as soon as possible, more announcements on education are expected in the autumn.

Just how much catching up in their education is expected of students while the pandemic is still ongoing is difficult to surmise. Head of school at Fulham Boys, David Smith, suggests it's time to re-examine the education system.

"We have devised and said what our curriculum should be. That doesn't mean it's right. We have an opportunity now to say effectively, did we get it right in the first place? How do we do things? Can we do it better going forward?"