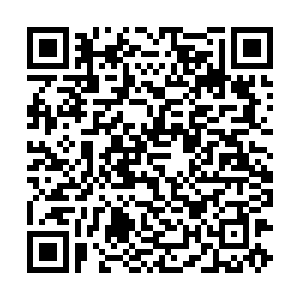 • Slovakia will start using Russia's Sputnik V vaccine from next Monday despite the drug not yet being approved by the EU's medicine's agency, EMA. The jab will initially be given to those aged between 18 and 60. The secret deal between Slovakia and Russia to take 200,000 doses led to the resignation of Prime Minister Igor Matovic.

• Denmark is banning Russian fans from attending a European Championship group stage match in Copenhagen later in the month. Russia is classed as a banned country for tourists due its level of COVID-19 infections.

• Indoor clubs should be able to reopen in areas of Spain with low infection rates, such as the Balearic islands, for the first time since August 2020, according to public health officials. There would be limits of a 50 percent capacity indoors and six people per table. It is still uncertain whether dancing will be permitted.

• The proportion of Dutch people with COVID-19 antibodies in their blood increased last month from 32 to 54 percent, according to a blood bank survey of 2,000 people. This is mainly due to an increase in vaccination levels in the over-50s.

• In Upper and Lower Austria, two of the country's states, children between the ages of 12 and 15 can now apply for vaccinations. Last week, the Pfizer-BioNtech vaccine was approved for over-12s.

• Incidence rates have been falling for weeks across some areas of Germany but in other states the numbers have once again begun to increase. In half of Germany, the seven-day rate is below 35 cases per 100,000 people. However, in the Hesse, which includes Frankfurt, it is at 46.1. Germany's overall incidence rate is 36.8.

• The UK is close to reaching a milestone of three-quarters of the adult population being vaccinated, with 39.4m having received at least their first shot. Despite this, Scotland is on the brink of a third wave of COVID-19, according to the country's clinical director.

• The Swiss group Lonza, a major supplier to pharmaceutical laboratories, will open a production line in the Netherlands to manufacture the Moderna vaccine, making it possible to produced up to 300 million additional doses per year.

After the European Commission authorized Pfizer-BioNTech's COVID-19 vaccine for use in children as young as 12, several countries in central and eastern Europe are changing vaccine age limits in their programs. Romania's prime minister has said children from age 12 could start receiving Pfizer shots from the beginning of June, while Poland will offer 12 to 15-year-olds Pfizer jabs from Monday.

Slovakia is also looking at Pfizer vaccines for 12 to 15-year-olds and are expected to begin registrations in a week's time. Meantime registrations have opened in the country for Sputnik jabs. The Russian vaccine will be administered from Monday, making Slovakia the second country in the EU to use the vaccine after Hungary.

Eight towns will offer the vaccine, one in each Slovak region. The country's health minister has estimated 80,000 people will be interested in the jab, Slovakia has enough doses for 100,000 people.

If there are vaccines left over from the Slovakian program, the country will look at donating jabs, possibly to Ukraine and Balkan countries. The health minister says donations can't be considered until 70 percent of the population has been vaccinated, it's hoped that target will be reached by the end of summer. 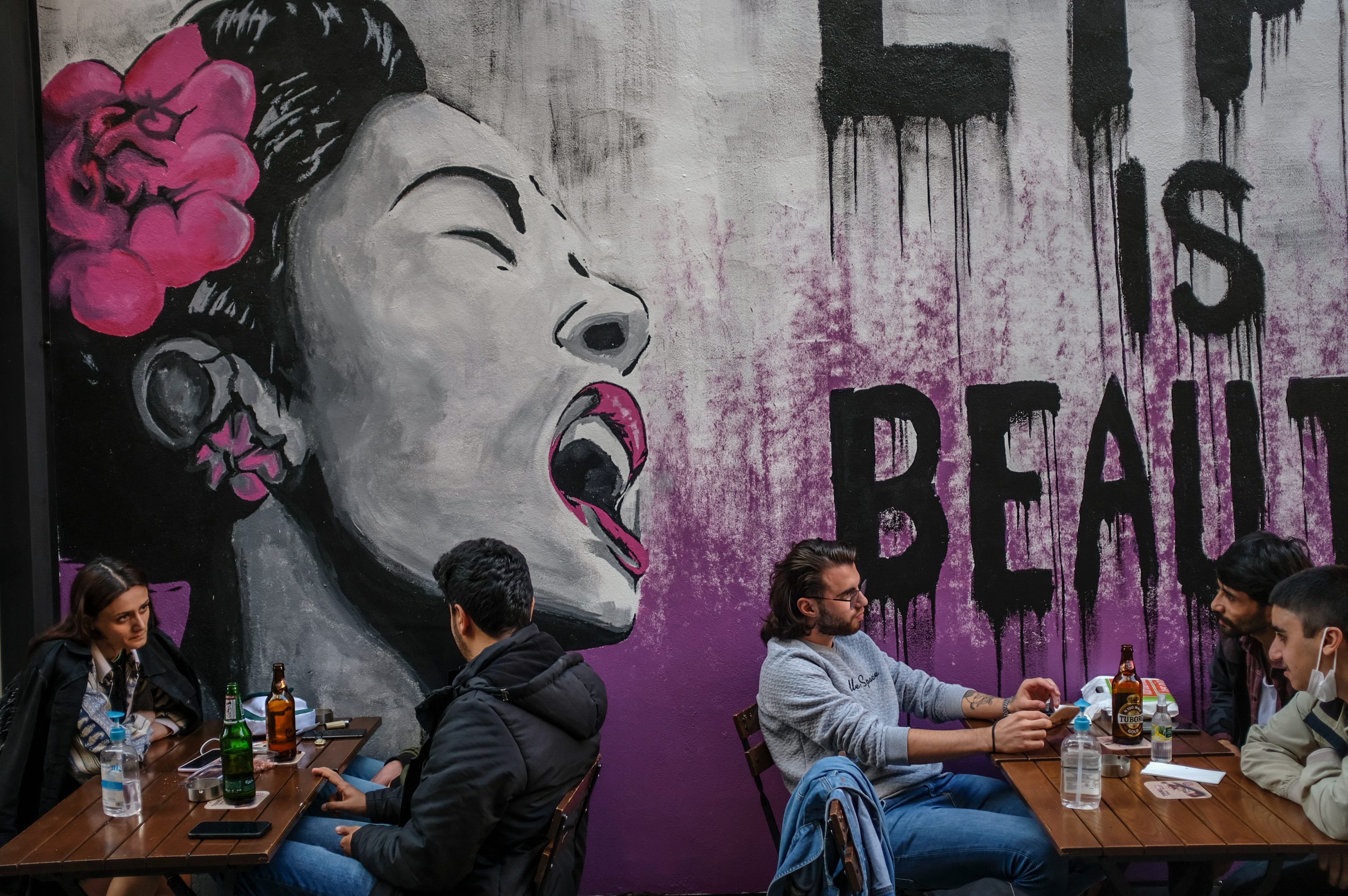 People sit in a restaurant in Kadikoy neighbourhood, in Istanbul, after the country lifted health restrictions measures. /Bulent kilic/AFP

People sit in a restaurant in Kadikoy neighbourhood, in Istanbul, after the country lifted health restrictions measures. /Bulent kilic/AFP

The debate in the UK about whether to lift all social restrictions is heating up. On Wednesday Professor John Bell from the University of Oxford, urged the government not to overreact.

Bell is a leading immunologist who advises the government. He said people should not "scamper down a rabbit hole every time we see a new variant" as COVID-19 would circulate "probably forever."

Bell also said he was not overly concerned about increasing cases of the Delta variant first identified in India because hospital admissions are still low.

Earlier this week Ravi Gupta from the University of Cambridge said the UK was at the beginning of a third wave of the pandemic and the June 21 re-opening should be delayed. 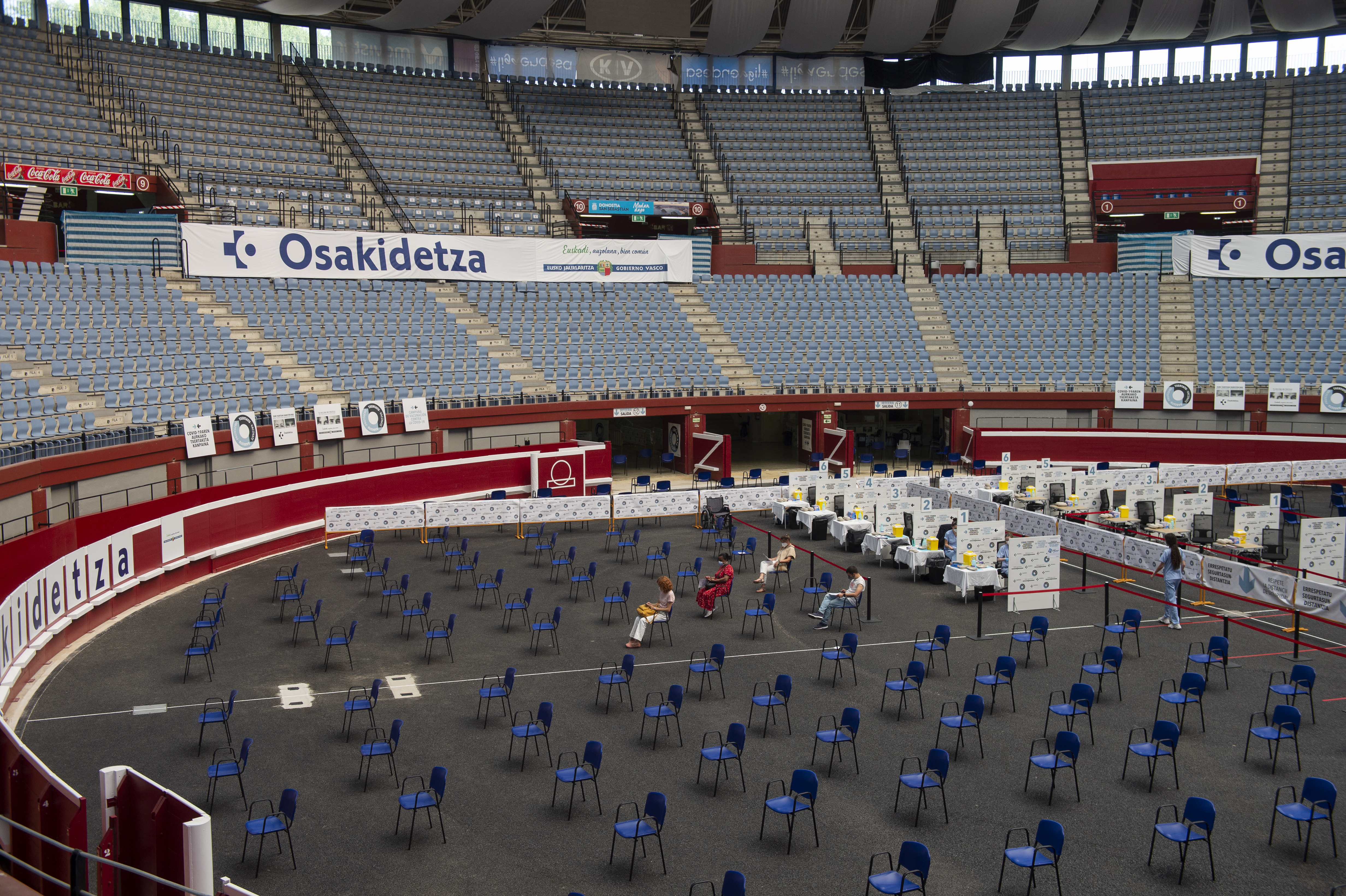 A group of people wait at the under-observation area after being vaccinated against COVID-19 at the Donostia Arena former bullring in San Sebastian, Spain. /Ander Gillenea/AFP

A group of people wait at the under-observation area after being vaccinated against COVID-19 at the Donostia Arena former bullring in San Sebastian, Spain. /Ander Gillenea/AFP

Belgium's Federal Health Minister is urging the government to make PCR tests cheap or free to people who want to travel this summer, but have not had the opportunity to get vaccinated. Right now, anyone looking to travel for tourism purposes must shell out nearly $60 for the test.

Minister Frank Vandenbroucke said vaccine delivery delays mean many Belgians will have to rely on PCR testing this summer.

According to official numbers Wednesday morning, 4.7m people have received at least one dose of a vaccine. Meanwhile, Belgium's infection numbers continue to shrink with an average of 1,740 daily new cases in the past week, a 28 percent drop from the week before. The number of patients in ICUs is also at its lowest level since early March. 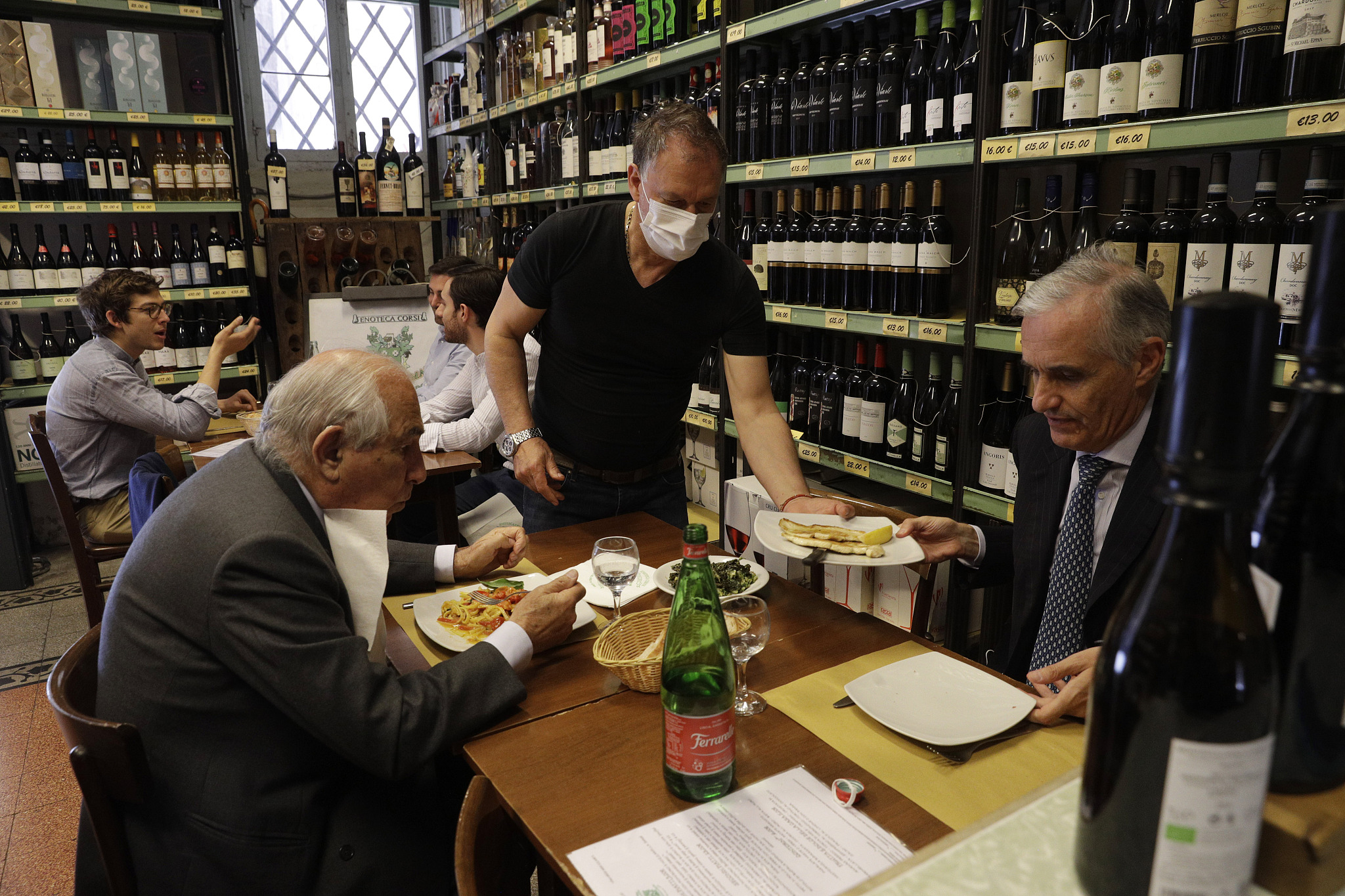 In Rome, Italy, people dine in a restaurant in the center of Rome as customers across the country were once again allowed to enter bars and restaurants. /Gregorio Borgia/AFP

In Rome, Italy, people dine in a restaurant in the center of Rome as customers across the country were once again allowed to enter bars and restaurants. /Gregorio Borgia/AFP

Wednesday sees the weekly health defense council meeting of senior French government ministers. The president chairs the meeting which discusses the vaccination campaign and the ongoing easing of restrictions.

A possible extension of the vaccination program to teenagers will be debated by ministers. The government 'vaccine tsar' says that a plan to vaccinate adolescents must start "very quickly."

Alain Fischer says: "We have all the authorizations possible. For 16-18 year olds, I think it's a matter of days."

June 2 marks one week to go until the government's next major step to ease restrictions. On June 9, a major relaxing of coronavirus controls is set to take place. 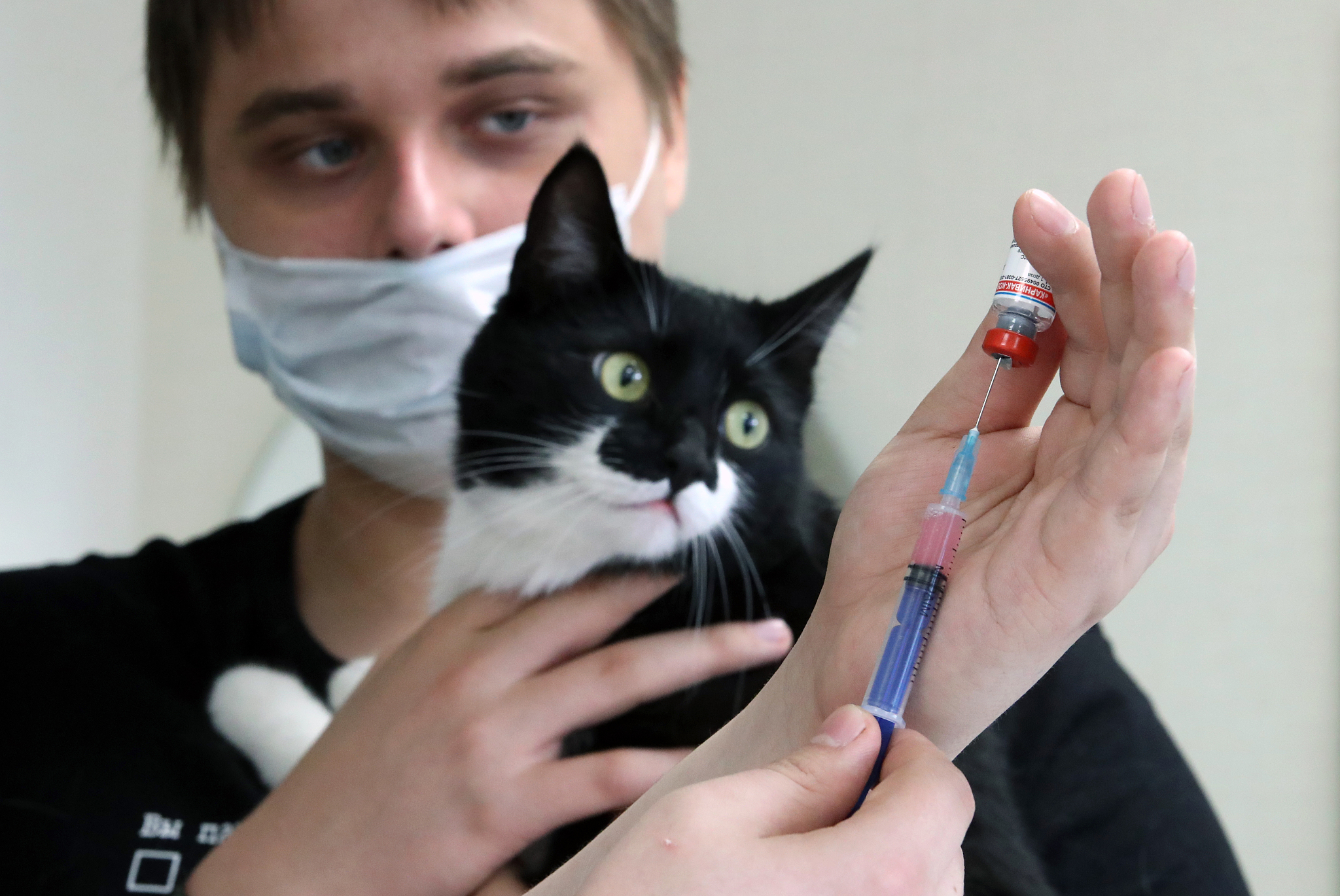 A cat receives the Carnivac-Cov vaccine in Moscow, Russia. The country has registered the first vaccine in the world for animals. /Sergei Karpukhin/TASS/VCG

A cat receives the Carnivac-Cov vaccine in Moscow, Russia. The country has registered the first vaccine in the world for animals. /Sergei Karpukhin/TASS/VCG