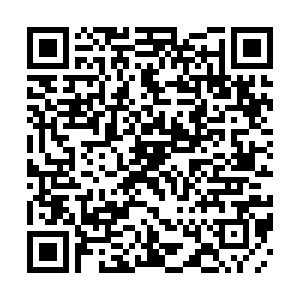 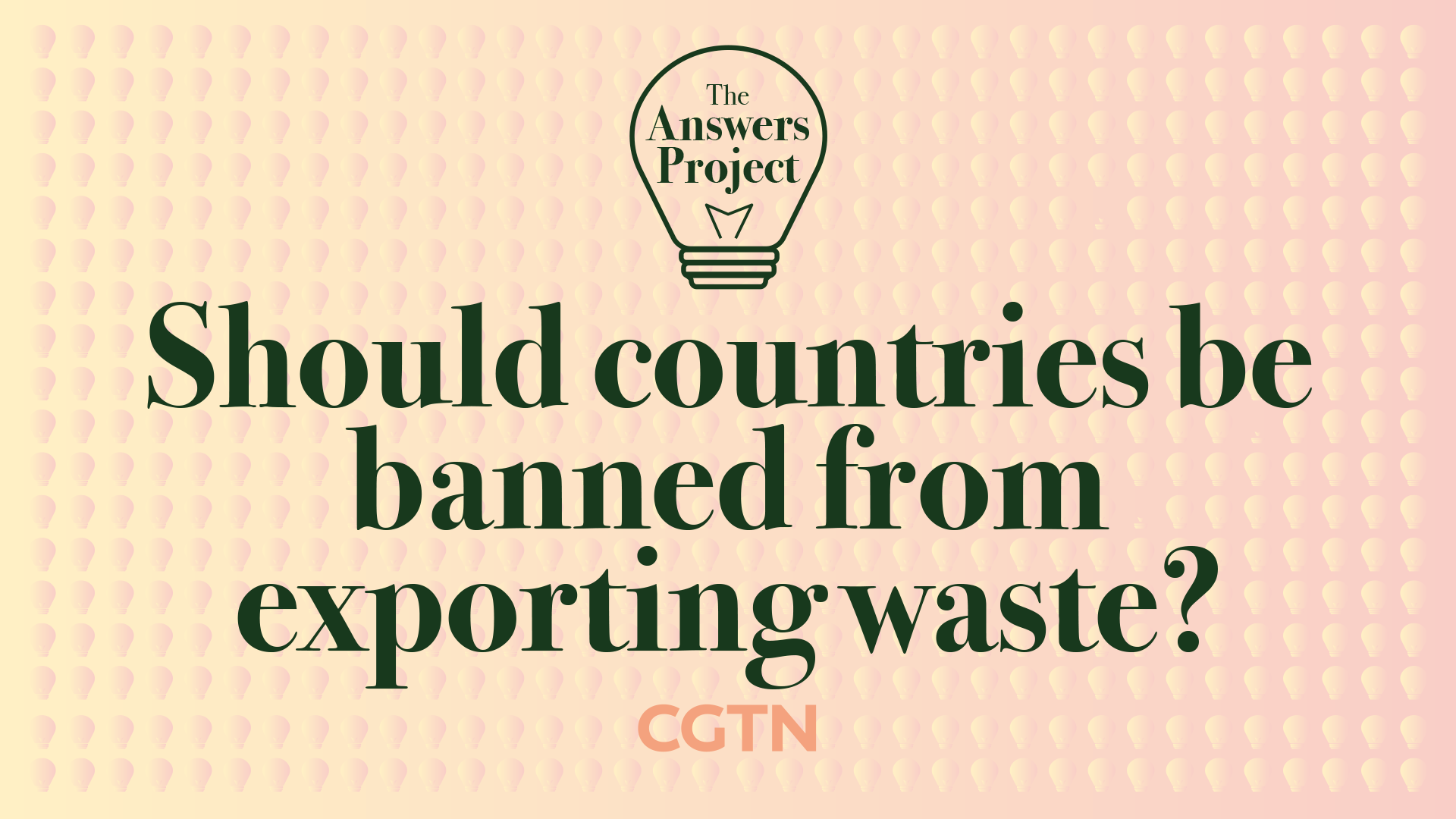 CGTN Europe's new podcast The Answers Project seeks to solve some of the world's most burning ethical, scientific and philosophical questions. In this episode, journalists Stephen Cole and Mhairi Beveridge discuss one simple question: Should waste exports be banned?

Rubbish is a big problem, and it's connected to rising standards of living: the more we can afford to throw away, the more we have to deal with our unwanted material.

Luckily for the richer countries, the old phrase "one man's trash is another man's treasure" dictates that poorer countries will pay to import recyclable waste: rubbish is a tradable commodity. Whether or not it feels ethically justifiable, it is economically unarguable – but the waste trade can cause major problems, especially for those at the end of the chain.

Simon Ellinn is CEO of the Recycling Association, a UK industry body representing 80 or more organizations operating at what he calls "the hard, dirty end of things" and annually producing more than 2 million tons of recyclable materials, which Ellinn refuses to call waste – "We've banned the term 'waste' in our organization," he tells CGTN Europe, "because we see it as a commodity, a raw material, which is very circular in nature."

Ellinn describes the UK as "significant exporters of paper and board – about 60 percent of everything we collect gets exported – and we're significant exporters, too, of plastics: we export about 70 percent." He also notes "scrap metal, cans in particular, glass and textiles" among the outgoings.

Altogether, the UK exports about two-thirds of its waste; in terms of plastic waste, Germany, France and the Netherlands are also bulk exporters, although the U.S. tops the global list. Where these exports go can change with economics and policy, as Ellinn notes. 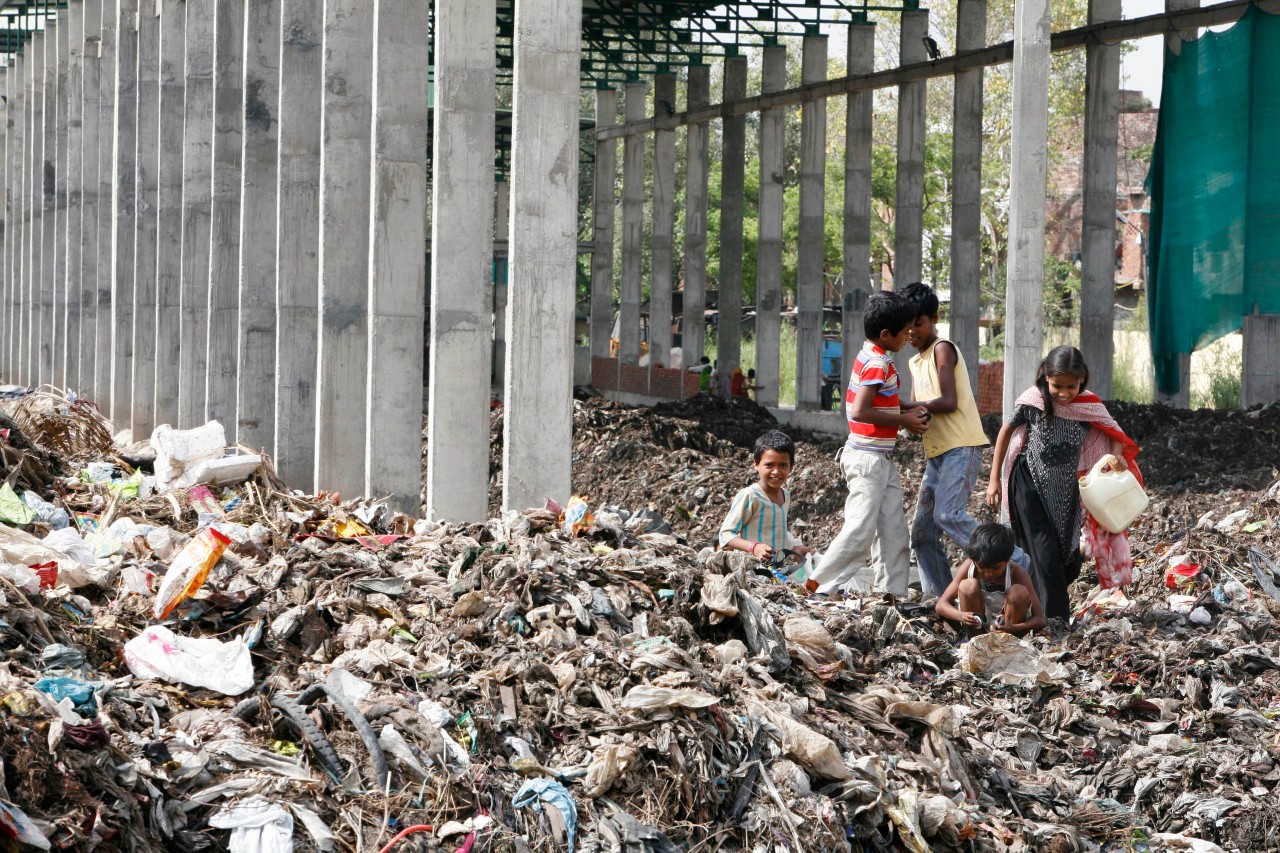 "The dynamic of where we export to is changing," he says. "Historically, Asian countries, particularly China, have been big purchasers of our material" – a process Ellinn describes as "circular," since "China delivers lots of goods to the UK in containers all in cardboard boxes, all wrapped in plastics etc..., and a lot of the time we're sending the material back where it started."

However, that changed suddenly in 2017 when China's new National Sword policy banned the import of certain types of solid waste and set strict contamination limits on recyclable materials. Since then, UK waste previously sent to China has required new outlets.

Ellinn reels these off, starting with other long-haul Asian destinations ("India, Thailand, Malaysia, Vietnam, Myanmar") before coming closer to home: "The other major area that we export to is into Europe, particularly Germany, the Netherlands, Turkey, France, Belgium, occasionally maybe as far south as Spain."

Waste is a tradable commodity: the importers are paying to take the exporters' junk. The worry is whether richer countries are simply dumping their detritus on poorer nations without too much thought as to the subsequent process, with cost-saving corner-cutting always an option for the recipients.

Right now the UK sends more plastic waste to Turkey than to any other country, and it may not all be getting properly processed. Marine biologist Sedat Gundogdu's studies of the microplastics in the rivers and sea near his home in Adana, southern Turkey, have led to him joining the #BreakFreeFromPlastic movement. 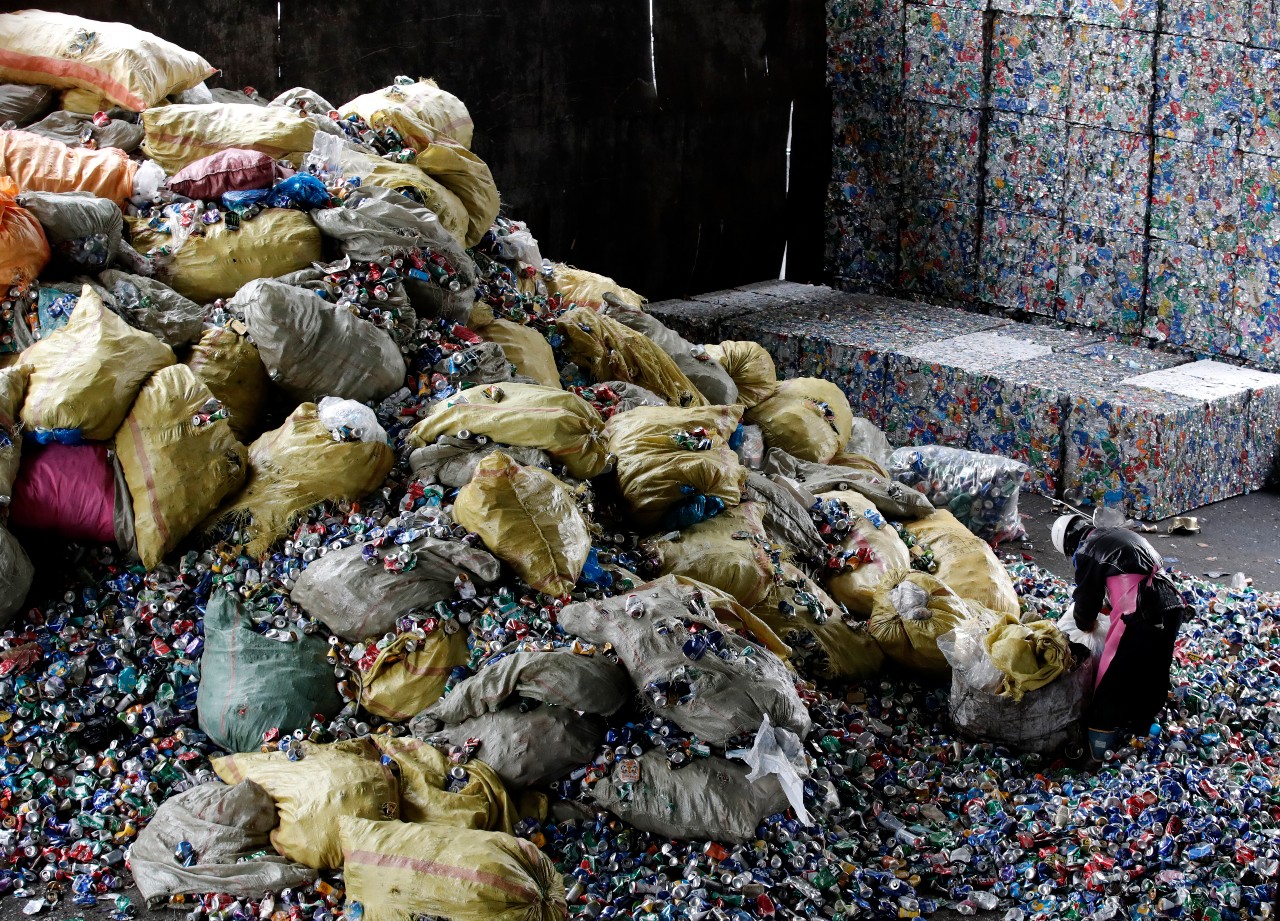 "I discovered 10 different illegal dumping sites around the city," he tells CGTN, saying that excess plastic waste from Europe is "just abandoned and dumped." Gundogdu collects evidence and shows CGTN plastic waste bought from British supermarkets by consumers who recycled in good faith – and says he's also found waste from as far away as the U.S. and New Zealand.

Worse still, he says that some of it is burned, creating chemicals which leach into nearby canals – which farmers use for irrigation and which also ends in a lagoon environment featuring green sea turtles and flamingos.

If you export your waste to poor countries, this isn't waste trade, it's waste imperialism
-  Sedat Gundogdu, #BreakFreeFromPlastic

None of this is what's supposed to happen. The idea is that we members of the public sort our rubbish; the recyclable stuff is sorted at a materials recovery facility in the UK; the plastic is then sold, and often exported; the majority of times it will be recycled into plastic pellets at an official recycling centers, where everything is properly tracked and monitored.

However, clearly there is a chance it might fall into the hands of small illegal recycling operators who simply dump or burn the waste on the side of the road. Gundogdu says the Turkish government is now tightening up, reducing the amount that recycling companies can import to half of their own domestic products, but he also questions the entire moral validity of the waste trade.

When economics force your hand

There are, as ever, economic ramifications of scale. For smaller countries, particularly island-based, it's often not viable to build a state-of-the-art recycling facility. Andy Street knows that well – he's an international waste management consultant who has spent almost 30 years helping islands with their recycling.

"Obviously, everyone would support recycling materials as much as possible, moving organics out of the waste stream and reducing the amount of residual waste, for some other means of treatment or disposal," he tells CGTN. 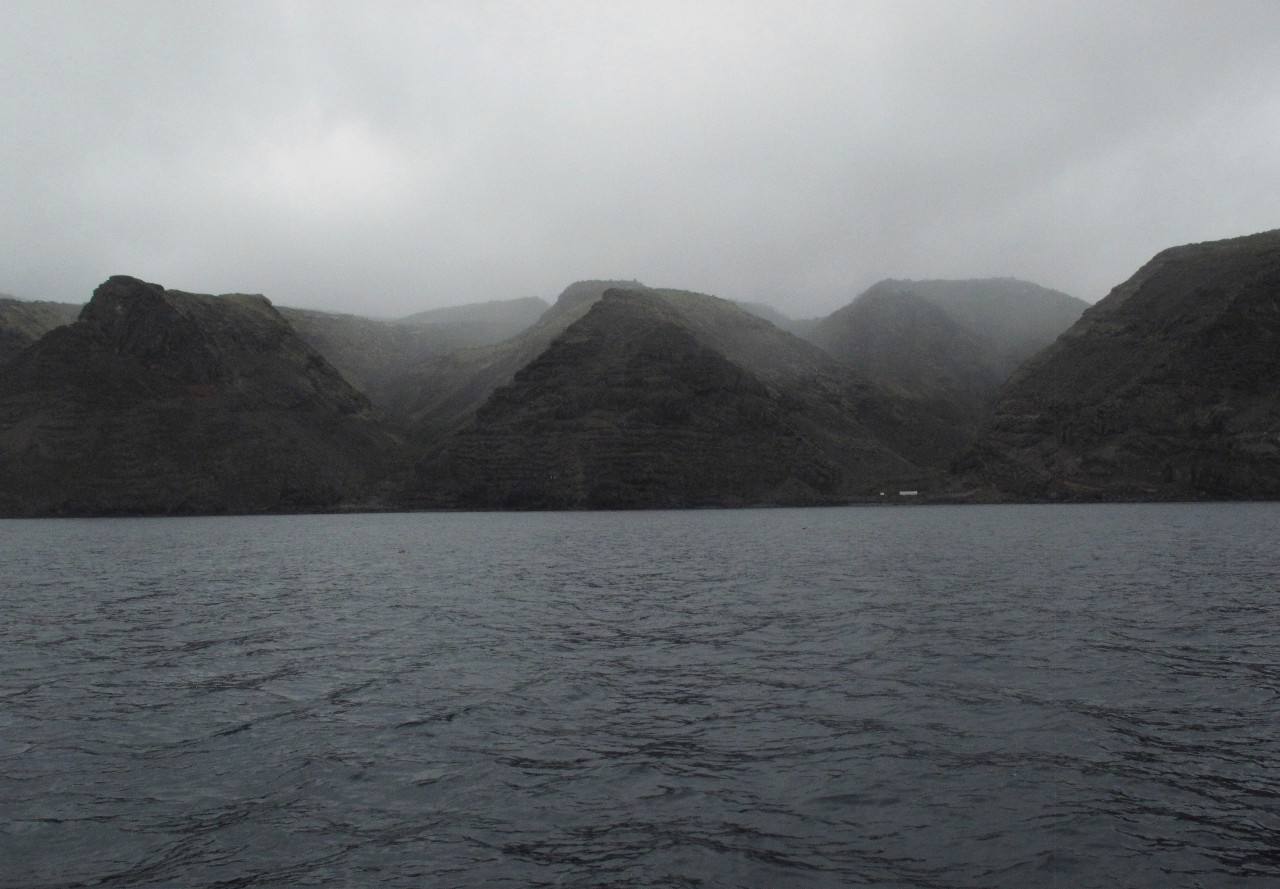 What if you're on a tiny isolated island like St Helena, thousands of miles from anywhere else? /Christopher Torchia/AP

What if you're on a tiny isolated island like St Helena, thousands of miles from anywhere else? /Christopher Torchia/AP

But for isolated islands, the market for recyclables or compostables is severely limited – as Street discovered when working on St Helena in the South Atlantic Ocean, 1,200 miles west of Africa and 2,500 miles east of South America.

"We ended up landfilling a lot of waste," he admits. "It wasn't big enough to justify thermal processing and the cost-effectiveness of exporting anywhere would be ridiculous: it takes five days, is very expensive, and you simply couldn't justify it from an economic or environmental perspective."

The waste trade is not the Wild West: there are laws and agreements in place, including the worthy if wordy Basel Convention on the Control of Transboundary Movements of Hazardous Waste and their Disposal.

Agreed in 1989, the convention has recently been strengthened to monitor the trade in plastic waste, with a new notification system between countries for the less recyclable plastic so that it doesn't end up in landfills, in the ocean or in the wrong hands. 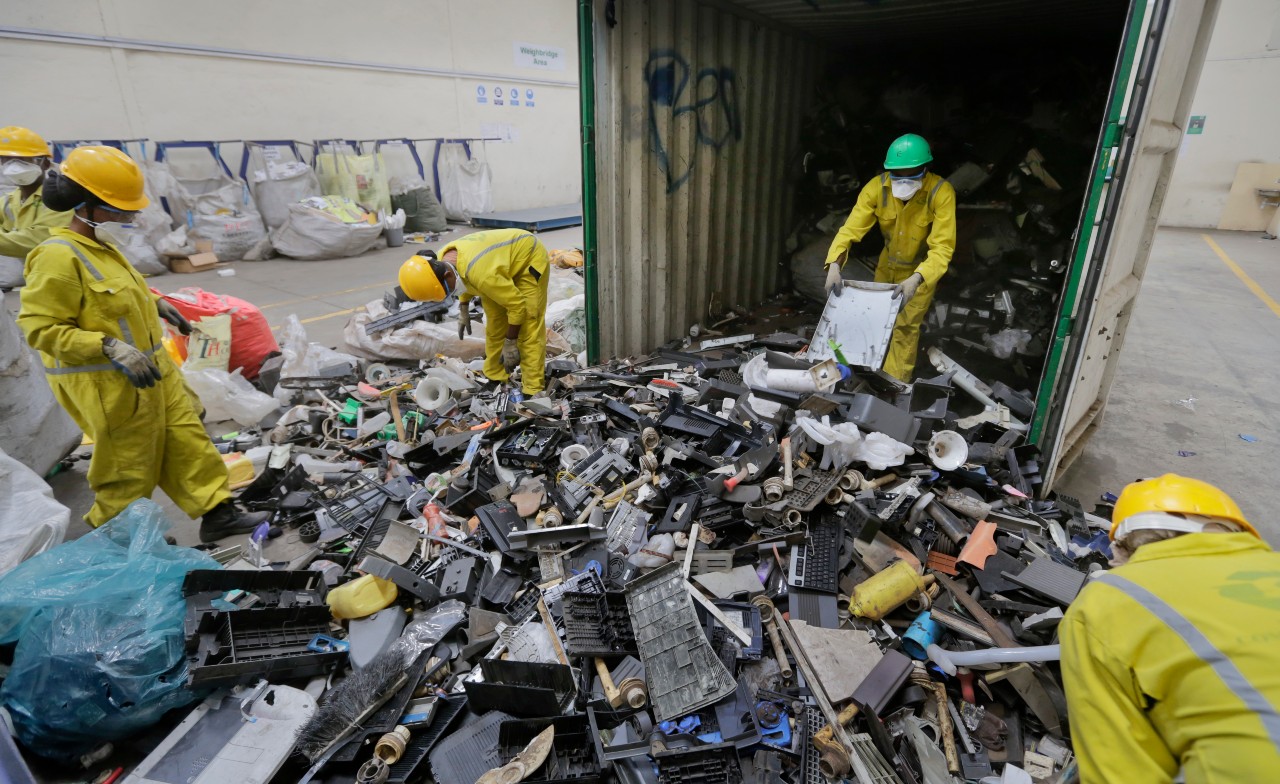 Any company breaking the law will end up in court in the country of jurisdiction, and may well come under the beady eye of Vittoria Luda De Cortemiglia, who works for the UN targeting illicit trafficking and transnational waste. A recent case she worked on in the Canary Islands typifies the multi–agency approach necessary to tackle such border-straddling crime.

"In June 2020, an organized crime group was dismantled by the Guardia Civil in Spain with the support of Europol and the Carabinieri from Italy, and also in collaboration with African countries," she explains. "This group was involved in illegally moving hazardous waste from the Canary Islands to several countries in Africa.

"People that have been arrested were suspected of document fraud to carry out these illegal shipments. The criminals would load maritime containers with second-hand items like vehicle parts and household goods, but also a large amount of electrical waste that should not be sent across countries."

That case illustrates the complex nature of the waste trade, whether legal or illegal, and shows how agencies must come together to maintain a process that doesn't ruin the planet.

The good news is that Simon Ellinn's Recycling Association is trialing a tracking technology which can monitor compliant recyclable material right to the end destination, using GPS technology, whether at home or abroad.

But as Ellinn notes, we all have a part to play. He cites a 2019 court case in which the UK waste management company Biffa was fined $495,000 for trying to send household rubbish to China as paper fit for recycling.

Environment Agency inspectors found that the bails contained nappies, wet wipes and condoms – but Ellinn thinks that blame should be shared around.

"They're just one cog in the wheel," he says of Biffa, "it's the whole supply-chain responsibility that's at fault. The [recycling] facilities that waste came from received seven million nappies per year. Who's regulating that? Are local authorities culpable for allowing the public to put the nappies in recycling bins?"

A chain is only as strong as its weakest link, and clearly education is needed, especially when different authorities have different rules for recycling. While there may be some members of the public uncaringly throwing any old rubbish in the recycling, there is also a new phenomenon called "wishcycling" which can damage the entire process.

Also known as aspirational recycling, wishcycling is the well-intentioned action of putting material in the recycling bin, hoping it's reusable. Sadly, this could contaminate truly recyclable content, meaning that waste facilities have to expensively extract the material – or contaminated batches can end up rejected into landfill.

Clearly, from public to waste management to exports to international law enforcement, there are a lot of stakeholders in what happens to our rubbish – and there are no clean, easy answers to the problem.

For much more on waste export – including which European supermarkets' plastic waste Senat Gundogdu found in Turkey – click on the podcast at the top of the page.

Previously on The Answers Project: Will soldiers become obsolete? • When should children start school? • How much is a life worth?