- Germany has banned travel from border regions of Czechia and Austrian state Tyrol amid a surge in cases of the virus variants. A thousand police officers have been posted to ensure the strict border controls are observed and rail company Deutsche Bahn has suspended services to and from the regions.

- A strain of the virus discovered at a mink farm in Poland can be passed from the animals to humans and vice versa, the country's agriculture ministry has said.

- The UK has become the first country in Europe to administer more than 15 million vaccines but Prime Minister Boris Johnson says there is still "a long way to go" and "there will be bumps in the road." Read more in Across Europe, below

- Czechia's government has reached a last-minute deal with regional governors to call a new 14-day state of emergency. Without it, the government would have been unable to maintain its current nationwide lockdown measures.

- France has reported a further 10,037 new hospitals patients in the last week, with 1,795 of them admitted to intensive care units, its health ministry said. Despite calls for a nationwide lockdown, the country's finance minister Bruno Le Maire admitted that such restrictions would be "the very last options when all others have been tried."

- The UK Prime Minister Boris Johnson has said he is "optimistic" he will be able to begin easing the current nationwide lockdown measures when he unveils his government's "roadmap" for reducing restrictions on February 22.

- The European Union's health commissioner Stella Kyriakides has said the bloc will fast-track approvals of new vaccines being made to combat new variants of the virus. Her comments come days after the EU's drug regulator, the European Medicines Agency, said it would also speed up its approval process on new jabs in order to roll them out as soon as possible.

- UK foreign minister Dominic Raab has said "we need to wait" to see the data before deciding when to reopen schools, casting doubts on the potential reopening date of March 8.

- The World Cup cross-country ski races will no longer take place in Czechia on February 20 and 21 after Germany tightened its border controls. Germany is due to host the world championship races from February 25 to March 7, meaning those who race in Czechia will be unable to cross the border to compete.

- "The solutions to the challenges we face... lie in the discussions we have with our friends and partners around the world," said the UK's Prime Minister Boris Johnson in a statement released before he chairs a virtual meeting with leaders of the G7 on Friday.

- Hundreds of people took to the streets of Vienna, Austria on Saturday to protest against the government's current lockdown measures. One protestor called "for freedom, peace, and love in this world" during the demonstration. 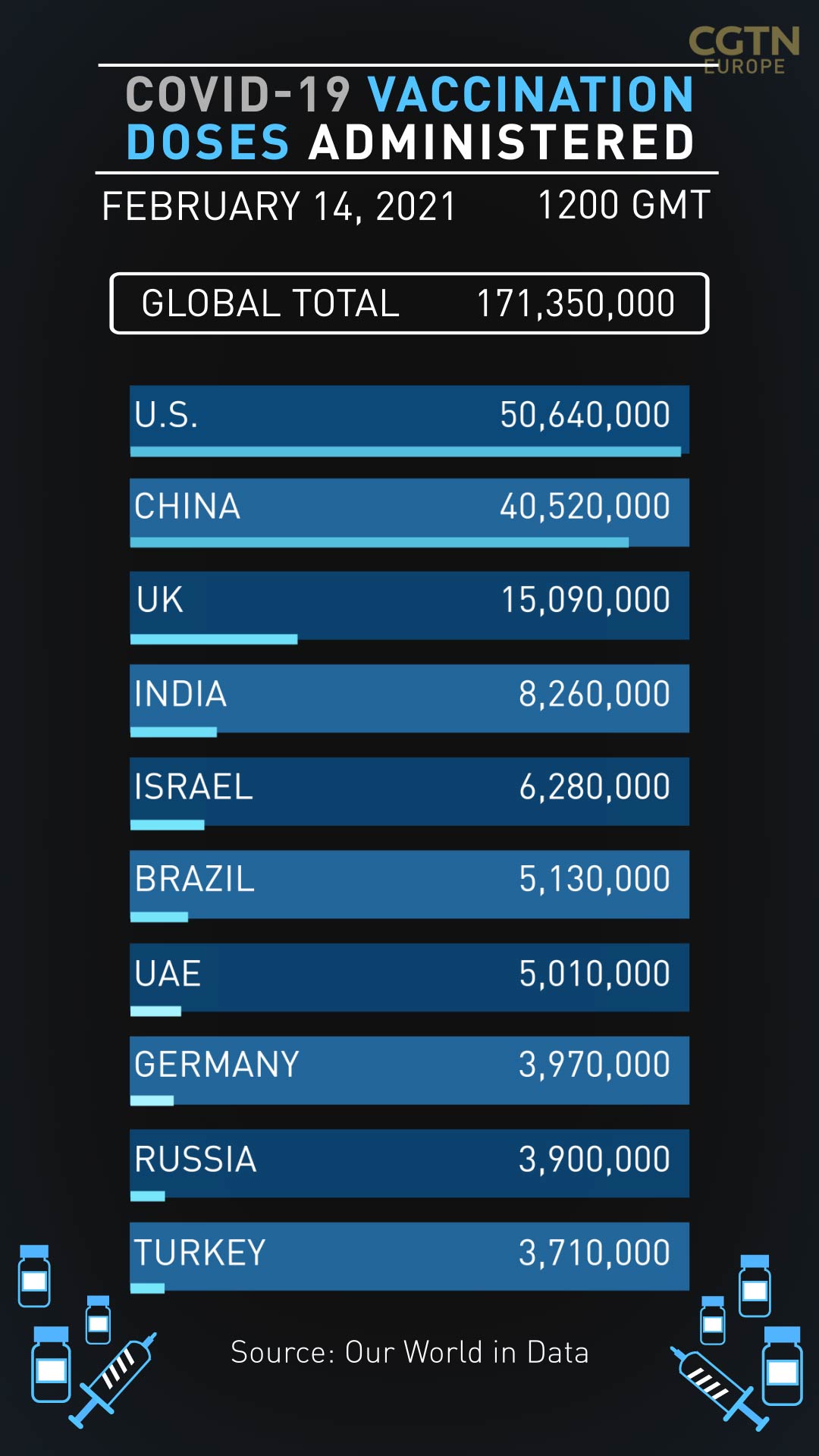 Fifteen million people have now received a first dose of a COVID-19 vaccine in the UK. It means the country has met its target to vaccinate its most vulnerable groups by February 15. Jabs are being extended to those aged over 65 from Monday.

Plans are being drawn up to ease England's third national lockdown with Prime Minister Boris Johnson saying enough progress has been made in the fight against the virus to warrant a relaxation of rules.

He confirmed schools will be the first to reopen but insisted that any lifting of measures would be "cautious." Further plans are set to be released on February 22.

A group of influential lawmakers from his Conservative party have written to the UK leader warning all legal restrictions must be lifted by the end of April, which could signal potential trouble ahead for any future lockdown laws. The European Union's health commissioner Stella Kyriakides has said the bloc will fast-track approvals of new vaccines being produced to combat new variants of the virus. /AP

The European Union's health commissioner Stella Kyriakides has said the bloc will fast-track approvals of new vaccines being produced to combat new variants of the virus. /AP

Spain's second biggest region Catalonia goes to the polls on Sunday, the vote taking place in the shadow of the coronavirus pandemic. With Spain still suffering the after-effects of the third wave, local authorities have taken additional health and safety measures at polling stations.

As for the election itself, former Health Minister Salvador Illa is spearheading the Socialists' bid to unseat the Catalan separatists in Sunday's election. It comes more than three years after a failed bid to break away from Spain. The polls put Illa's Socialist Party of Catalonia neck-and-neck with the pro-independence parties. 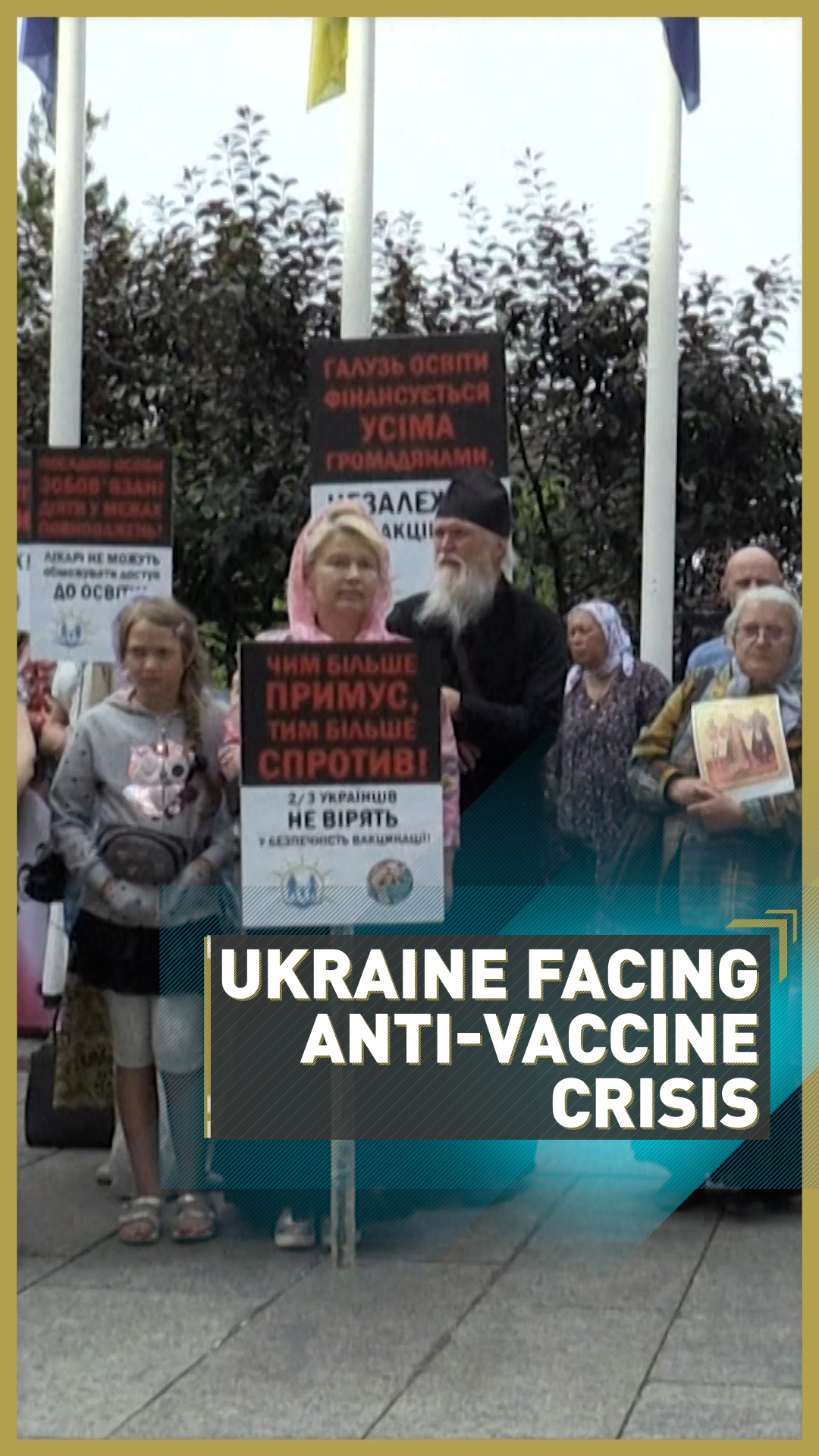 CGTN America: China urges U.S. to return to WHO with "serious, earnest" manner