Download
Who should get the vaccine first: The vulnerable, the elderly, health workers, teachers, smokers?
Giulia Carbonaro 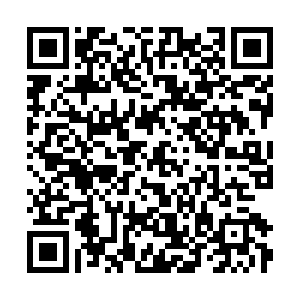 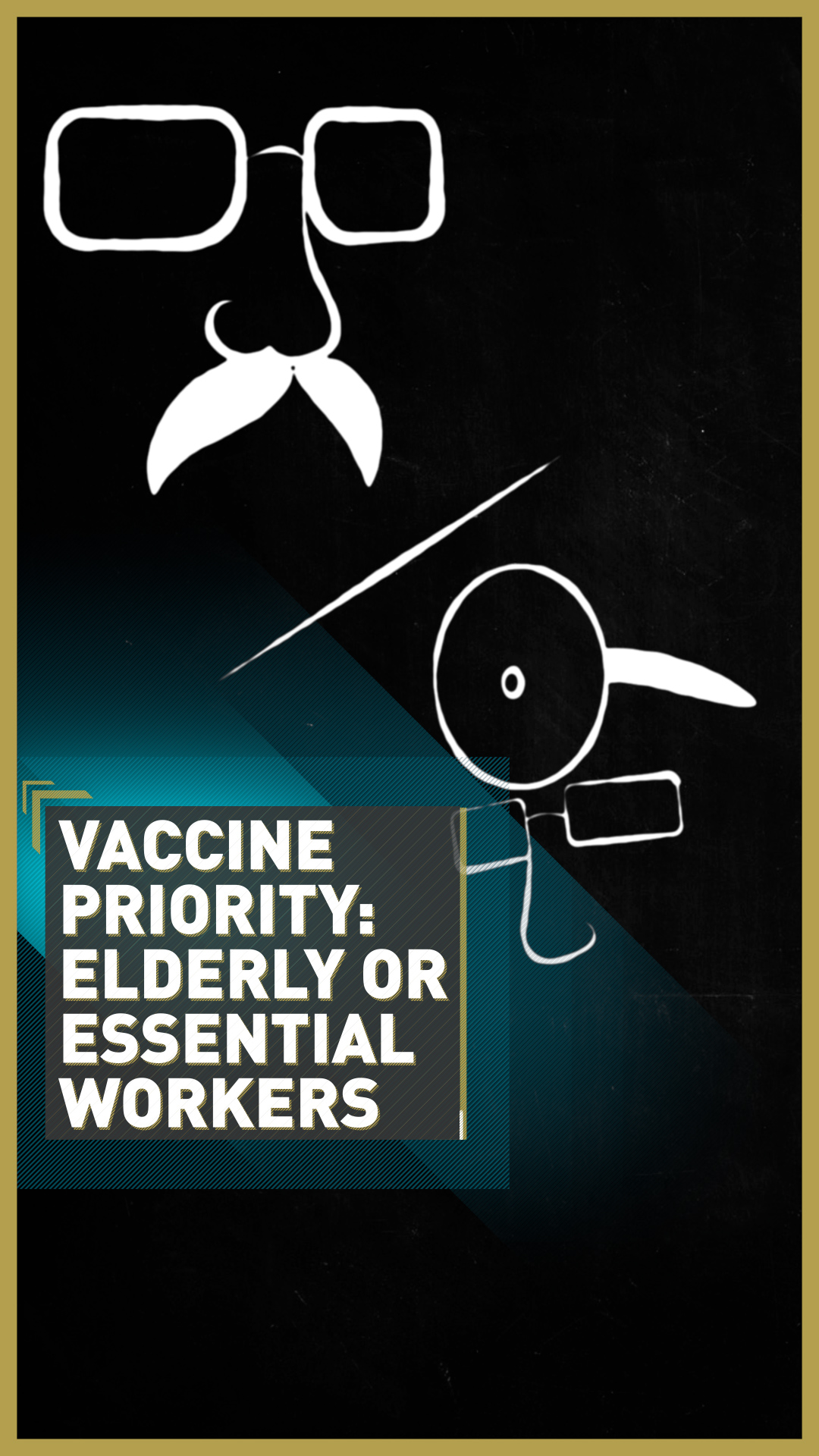 As the first COVID-19 vaccination campaigns kicked off across the world at the end of 2020, millions of people were wondering: When will it be my turn?

Among logistical difficulties and limited supplies, more than 60 million doses of the vaccine have been administered since the start of vaccination campaigns in more than 50 countries. But with a global population of 7.8 billion people, this number represents only a small step towards halting the spread of the virus.

"Availability is limited, so we need to maximize the public health benefit of the vaccine, which means targeting certain specific groups," explains Alberto Giubilini, a senior researcher in ethical vaccine distribution at the University of Oxford. 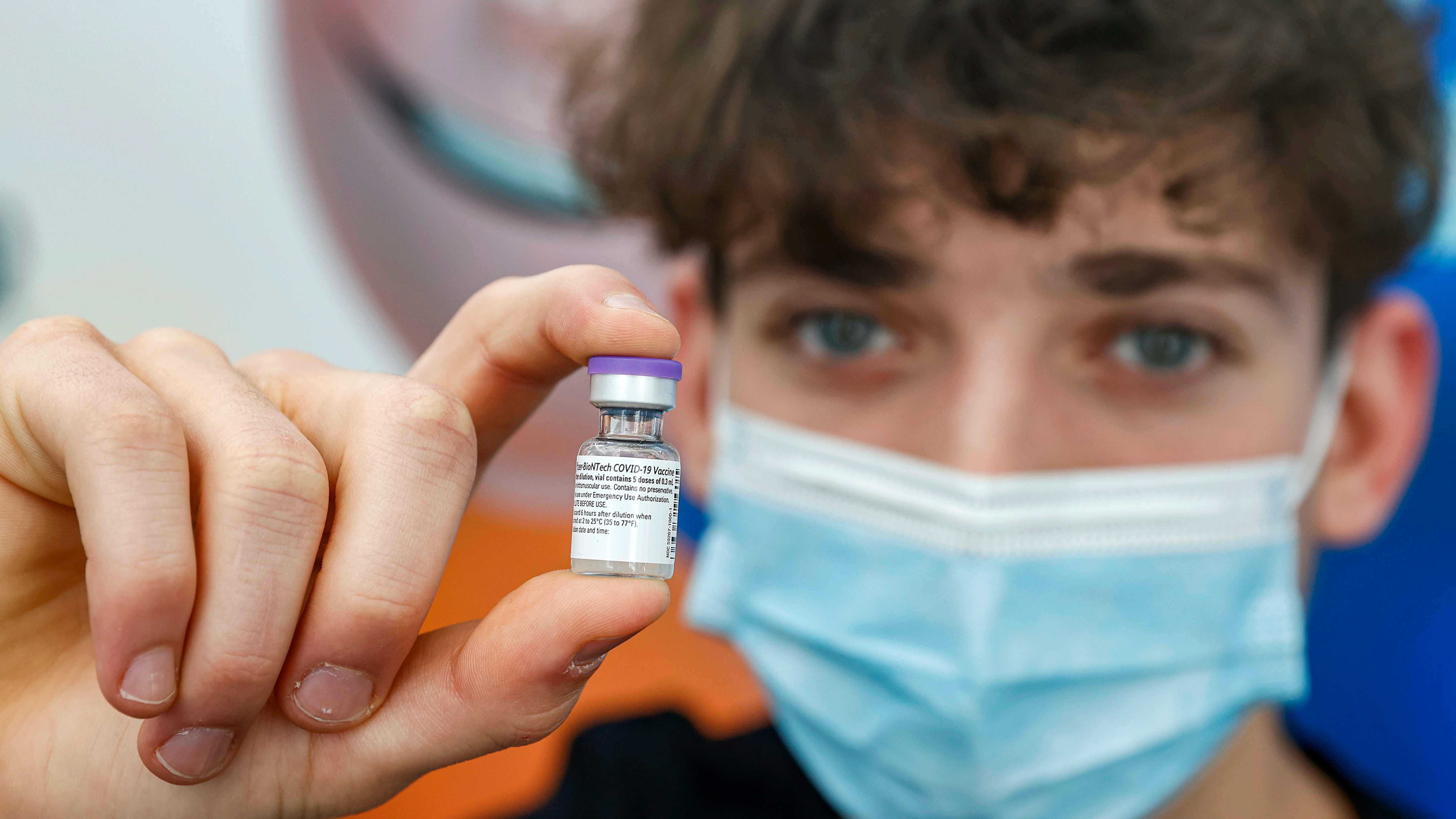 Jonathan, 16, receives a dose of the Pfizer-BioNtech vaccine in Tel Aviv. Israel has began administering the COVID-19 jab to teenagers as it pushes ahead with its inoculation drive. /Jack Guez/AFP

Jonathan, 16, receives a dose of the Pfizer-BioNtech vaccine in Tel Aviv. Israel has began administering the COVID-19 jab to teenagers as it pushes ahead with its inoculation drive. /Jack Guez/AFP

Protecting the most vulnerable

Doctors and nurses in overwhelmed hospitals across the world have faced tough ethical questions since the first peak of the pandemic in spring last year, when respirators were scarce and patients had to be turned away from life-saving treatment. What patient deserves to be treated before another?

A similar question challenges governments across the world as the first vaccination campaigns proceed amid a very scant supply.

With a grim record now of more than 2 million deaths worldwide since the beginning of the pandemic, all countries have started vaccine roll-outs for their most vulnerable citizens: the elderly, specifically those in care homes, the places where the virus has claimed the most victims.

For this reason, there are only small differences in the highest priority group identified by most countries. In the UK, for example, vaccinations have prioritized nursing home residents and personnel, the same as in Italy, France, Serbia, Germany, Spain and the U.S..

Medical workers and other age categories follow suit, with small differences for which age group (all over-50s) each country prioritizes before another (the UK starts with the over-80s and then extends the vaccine to over-75s and over-65s, Italy starts with the over-80s and then eventually moves to those aged 60 to 79, France prioritizes the over-75s and Germany put those over-80s, over-70s and over-60s in three different priority groups).

But the biggest differences appear once this high-risk group is vaccinated: who should follow them? Should the vaccine be given to others who, because of pre-existing clinically critical conditions, are more likely to die or suffer severely from COVID-19, or those who work on the front-lines, running essential services, who are likely to be the most exposed to the virus? 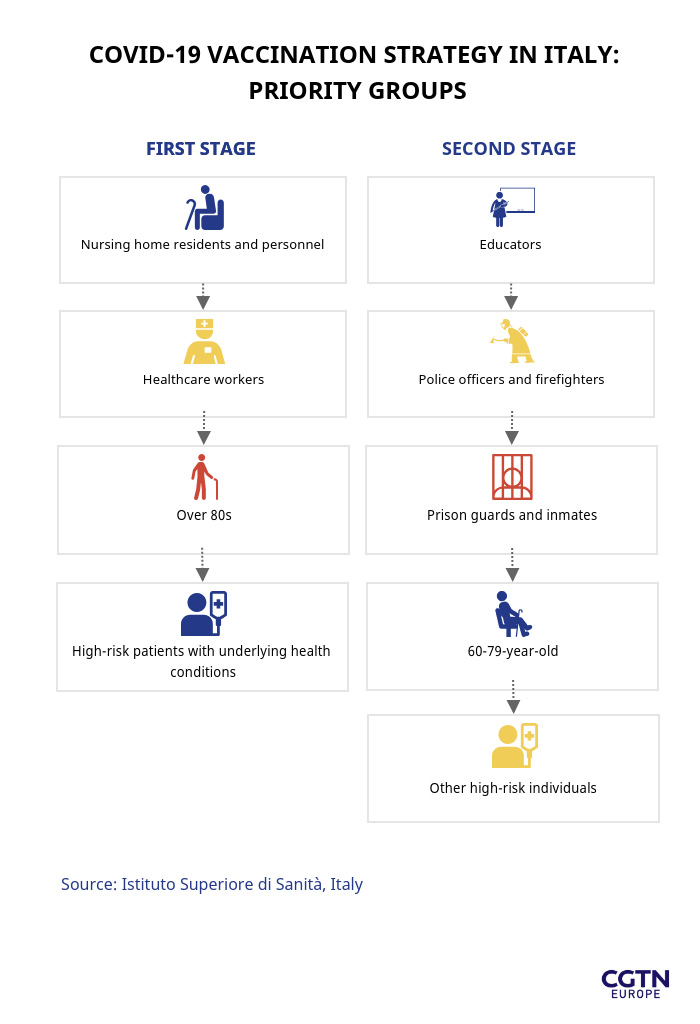 Giubilini thinks that, as governments consider prioritizing those most vulnerable to the virus, there's another factor they should consider carefully: life expectancy.

"You might want to consider the quality of life that people will have, because the problem is that, if we only consider vulnerability, we might end up with certain kinds of decisions that clearly are not really in the public health interest and maybe not even in the individual interest," he says.

"For example, here in the UK a few weeks ago, a person aged 108 has been vaccinated against COVID-19," he explains.

"And given the limited availability, we really need to think carefully about whether that is a good use of a very, very limited resource, because other people who might need the vaccine more and might benefit the most from the vaccine because they have a longer life expectancy, will not be able to get this vaccine now because of these decisions."

It's quite a utilitarian approach to the issue: the choice of who should get vaccinated first in the vaccine roll-out should consider what achieves the greatest happiness for the greatest number, minimizing harm as much as possible.

But another principle of medical ethics is equal treatment. According to this principle, every patient is of equal value, whatever their background, creed, or age.

Following this principle, governments are ethically bound not to discriminate among the population according to their function in society.

But with an eye on restarting economies and slowly reinstating normal life, some countries have introduced key workers into their vaccination priority groups – causing some controversy over priority order.

Phase 1b of the vaccine roll-out in the U.S., according to the recommendations made by the Centers for Disease Control's (CDC) Advisory Committee on Immunization Practices (ACIP) on the federal level, should extend vaccination to first responders such as firefighters, police officers, educators, food and agriculture workers, manufacturing employees, public transport workers and grocery store workers.

Other essential workers such as food service employees, transportation and logistics workers, construction workers, finance employees, those working in IT, communications and the media, should finally include in the U.S. Phase 1c, together with older people between 64 and 74 and high-risk individuals between 16 and 64. 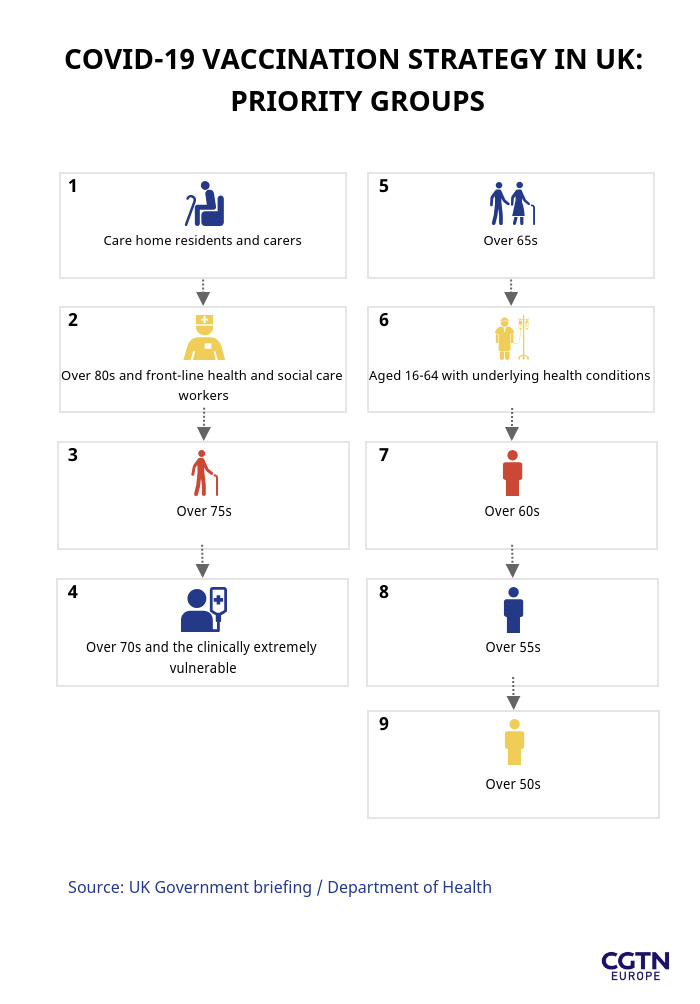 It's an approach that stands out compared with other countries which significantly differentiate between essential workers and generally put them lower in priority after those most vulnerable.

Spain has included only medical and social care workers in its vaccination plan so far, while France put essential workers at high risk of exposure to the virus (for example teachers and security) in its fourth priority group, after nursing home residents and staff, the over-75s, the over-65s and those with underlying health conditions, while on the same priority level of those in precarious conditions (homeless or detained in prison). 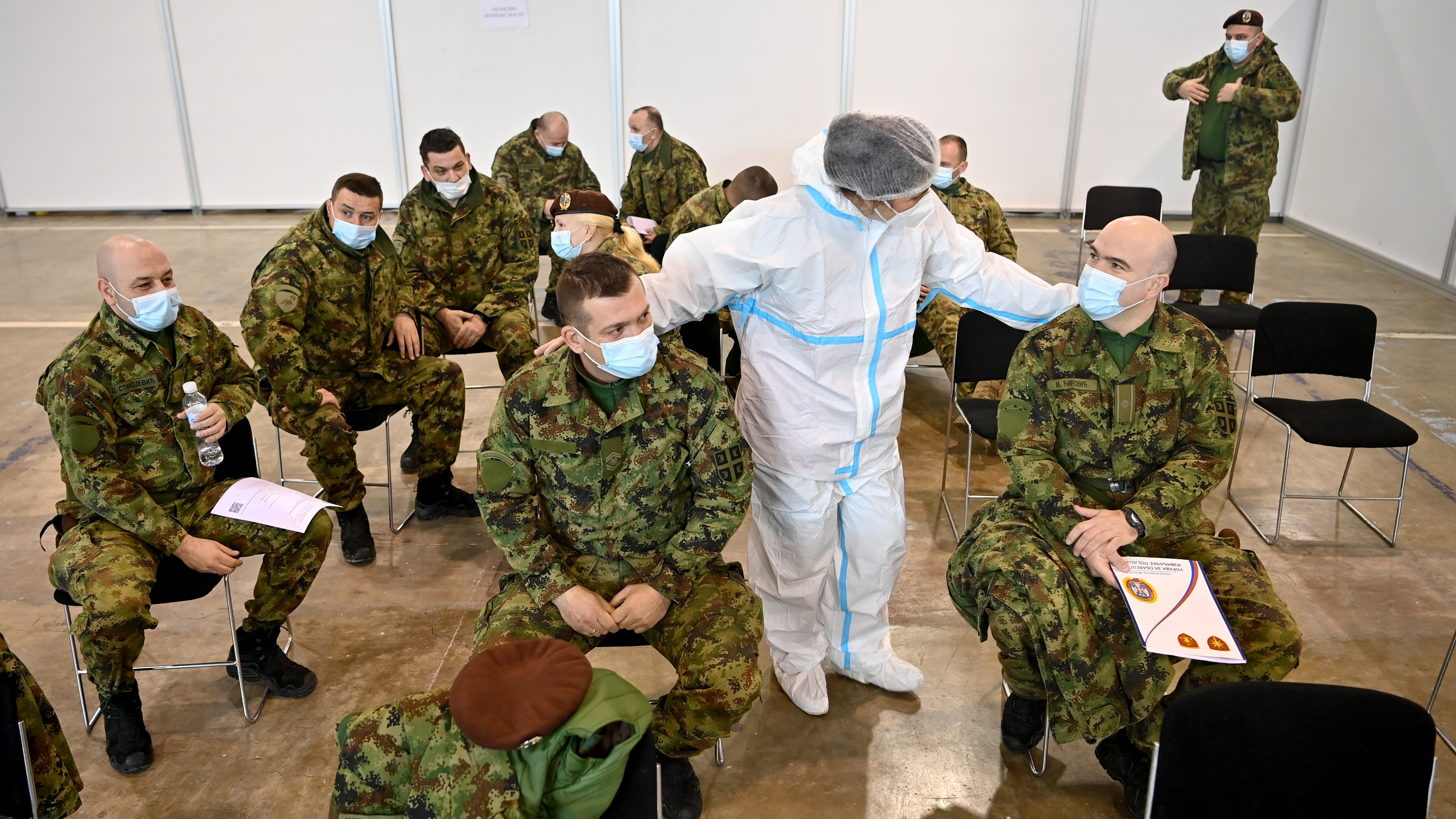 A medical worker checks Serbian army personnel after they received a dose of the Chinese-made Sinopharm vaccine at a newly established vaccination center in Belgrade. Soldiers are part of Serbia's second priority group. /Andrej Isakovic/AFP

A medical worker checks Serbian army personnel after they received a dose of the Chinese-made Sinopharm vaccine at a newly established vaccination center in Belgrade. Soldiers are part of Serbia's second priority group. /Andrej Isakovic/AFP

Italy is including educators, prison guards, police officers and firefighters in its second priority group, to be vaccinated after the first three to six months of the vaccination campaign dedicated to the over 80s and those suffering from other health conditions.

The UK, which is vaccinating by age group, isn't prioritizing any particular profession, while Germany has been criticized for discriminating even within the medical profession, prioritizing medical staff working as first respondents in ICU and emergency rooms over general doctors and nurses.

Germany, which has identified three priority groups, will go ahead with vaccinating key workers maintaining public infrastructure in its second priority group, while including in the third infrastructure workers, government officials, parliamentarians, police, firefighters, educators and retail workers, among others.

According to the German Ethics Council, all three groups should be vaccinated simultaneously where possible.

READ MORE: A matter of life and death: Which patients should doctors treat first?

The discussion over what groups should be prioritized next as more supplies of the vaccine become available is still open, with new arguments over categories so far not included into the priority order being pushed forward by experts.

The issue of protecting BAME communities, disproportionately affected by the virus, has been raised in the UK where concerned general practitioners have reported BAME patients to be more reluctant to have the jab. A survey conducted in the country showed that up to 72 percent of black people were unlikely to take the vaccine because of mistrust of the vaccination program.

Only one U.S. state so far, Montana, has included Native Americans and people of color as categories at high risk. 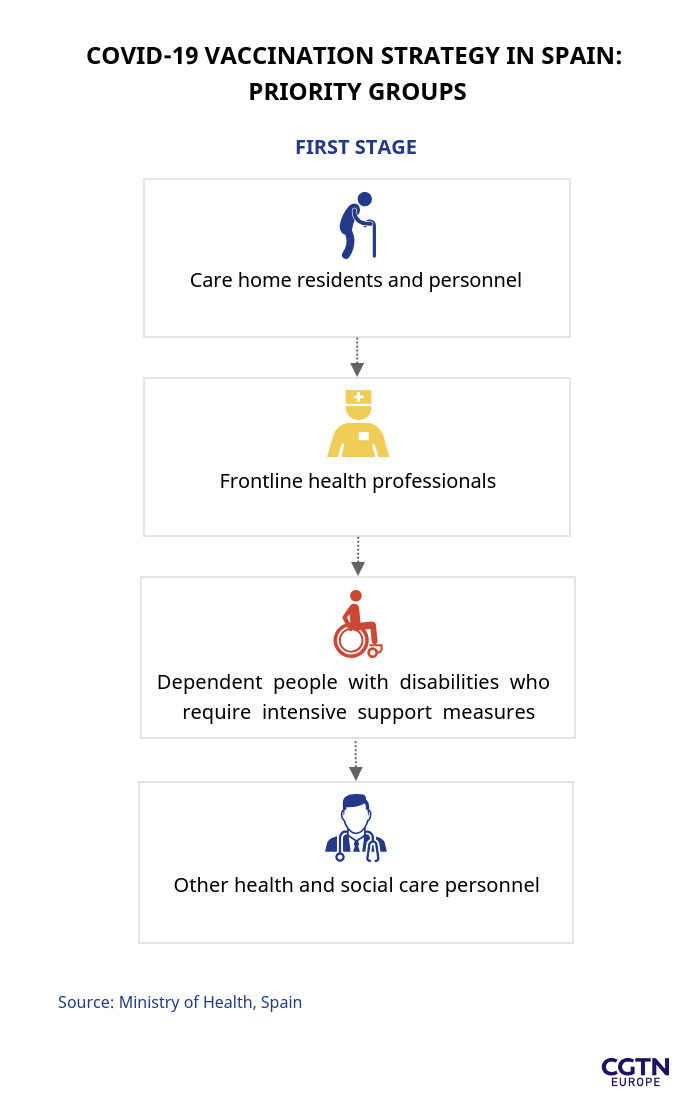 Two U.S. states, New Jersey and Mississippi, are currently offering the vaccine to smokers under the age of 65, recognized as a category at risk – a decision that angered many essential workers (teachers, among others) lower in priority.

What's certain is that countries need to be as transparent and clear as possible about their choices over vaccination priority, so they are able to justify them to the public.

Spain's vaccination campaign has been rocked by scandal as politicians, retired healthcare workers and medical workers' family members were caught skipping the line and getting the injection despite not being in the highest priority group.

Some politicians defended themselves, saying they got the shot to boost public confidence in the vaccine, others said they just used vials that were left over so that they wouldn't go to waste.

These instances, which could be seen as getting special treatment, sparked public outrage, highlighting how important it is to have a clear set of rules and principles for the vaccination process.