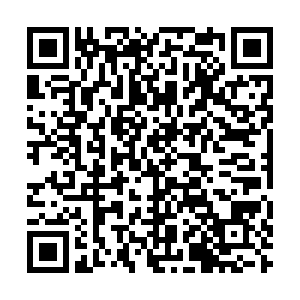 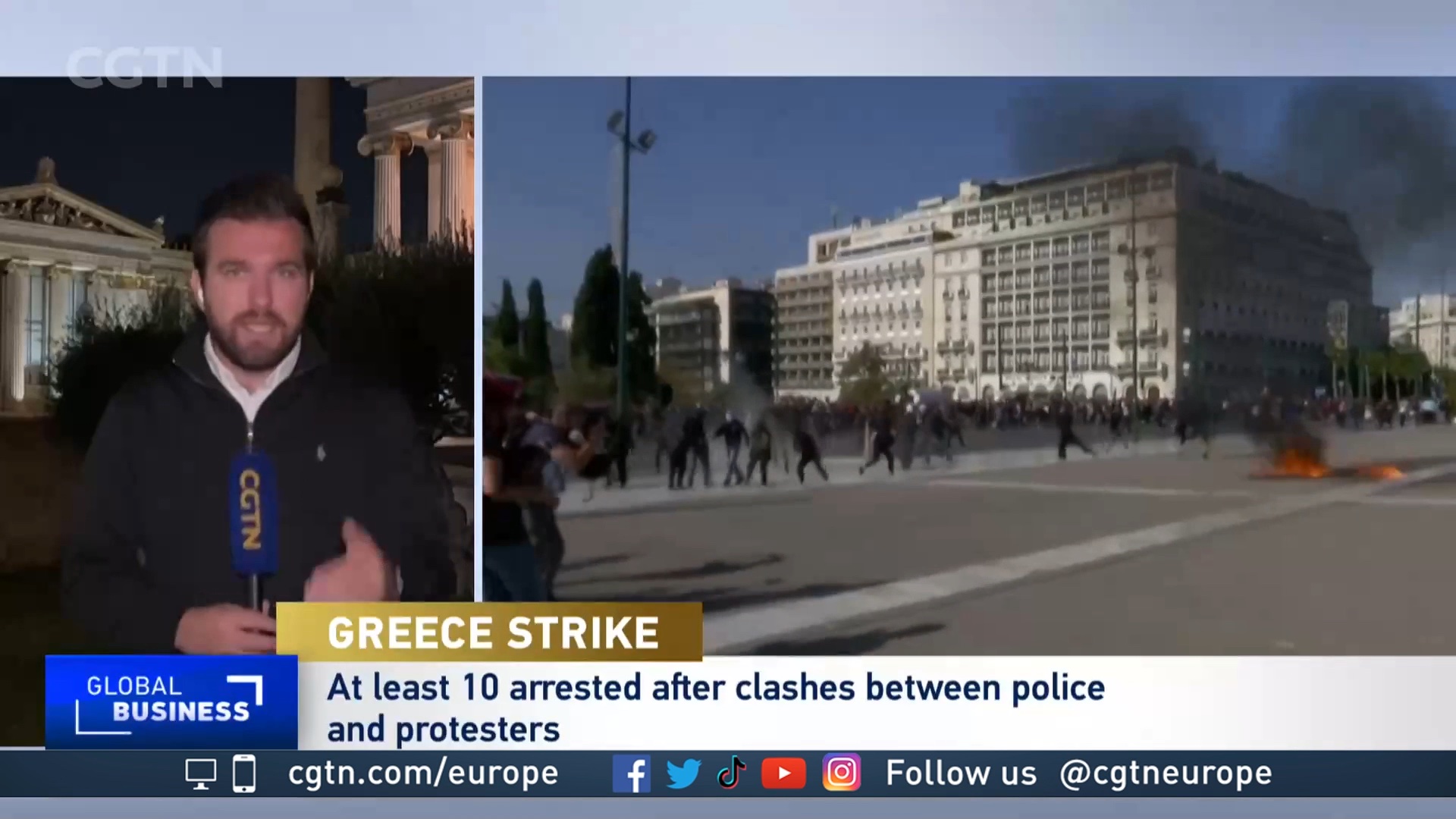 Greek police detained at least 10 people on Wednesday after clashes erupted during a protest outside parliament against soaring inflation affecting households. Police fired tear gas to disperse a group of protesters throwing stones and petrol bombs at police.

The clashes took place after Greek labor unions called a 24-hour general strike as they protested over high energy and food costs.

Unions are demanding lower taxes and an increase to the minimum wage, which currently stands at just over $700 per month for salaried workers. They say it's impossible to live on that wage.

Minimum wage worker Evgenia Vrousugen told CGTN Europe, "I pay 300 euros ($303.96) for my rent, and another 300 euros to the supermarket, right there is my one monthly income. The second one I put towards my utility bills, heating, water and electricity, but still it's not enough. I currently owe over 600 euros ($608.33) for my electricity bill, and if I don't pay soon, they'll cut it."

To try to deal with a massive wave of price increases, the government is subsidizing fuel, cutting sales tax for businesses and students and has launched a "household basket" of lower-priced staple goods.

But these measures have been met with discontent as Greeks continue to feel the impact in their wallets.

On Wednesday, thousands of protesters gathered to denounce a model that they say is not working for them. They are demanding more government support measures to cushion the impact of inflation. 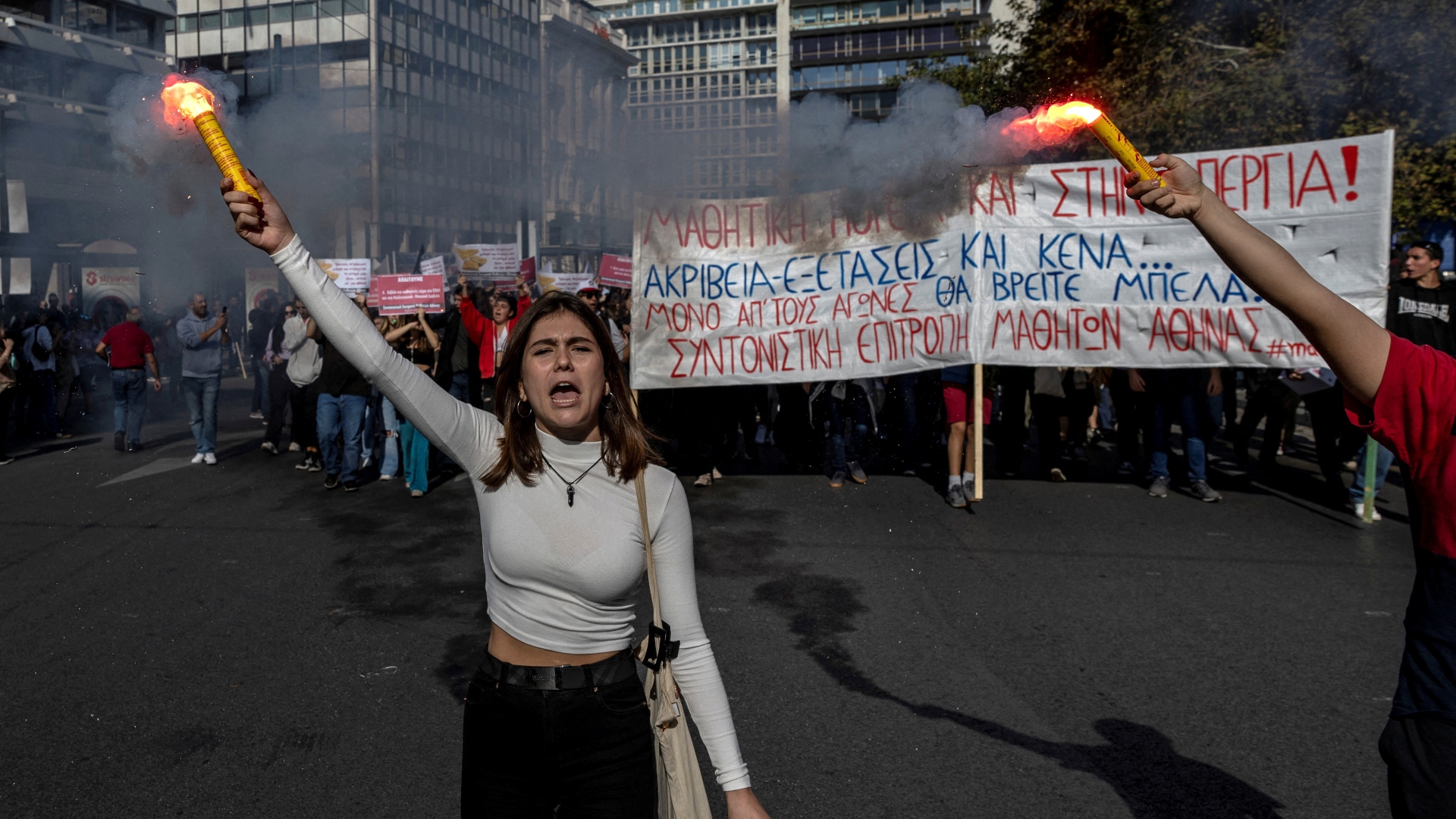 Thousands took to the streets during the 24 hour nationwide strike in Greece./Alkis Konstantinidis/Reuters

Thousands took to the streets during the 24 hour nationwide strike in Greece./Alkis Konstantinidis/Reuters

The nationwide strike forced the country's largest port of Piraeus to cancel all scheduled trips and keep ships moored up.

Greek incomes were badly impacted by the decade-long financial crisis and then the pandemic. Now greeks must contend with 12 percent inflation, a 30-year high.

It's pushing many, still impacted by Greece's 2008 financial crisis, into poverty.

"I feel exposed to everything, my phone bills, rent, gas, food costs - everything. During the financial crisis, I was worried that I would lose my monthly income, but that is happening now. Ever since 2008, I've been living in a state of poverty," said minimum wage worker, Athanasia Katsouli.

The government is pledging to do more in the coming months, but the thousands that came out on the streets of Athens, say they feel vulnerable.

The Greek government increased the minimum wage last May that adds around $50 extra a month to low income salaries. Now they're expected to increase that further from January.

But The message from unions is that people can't wait until the new year to get help, warning if the government doesn't act soon, they'll be further protests in the weeks and months ahead.