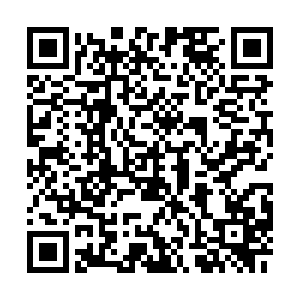 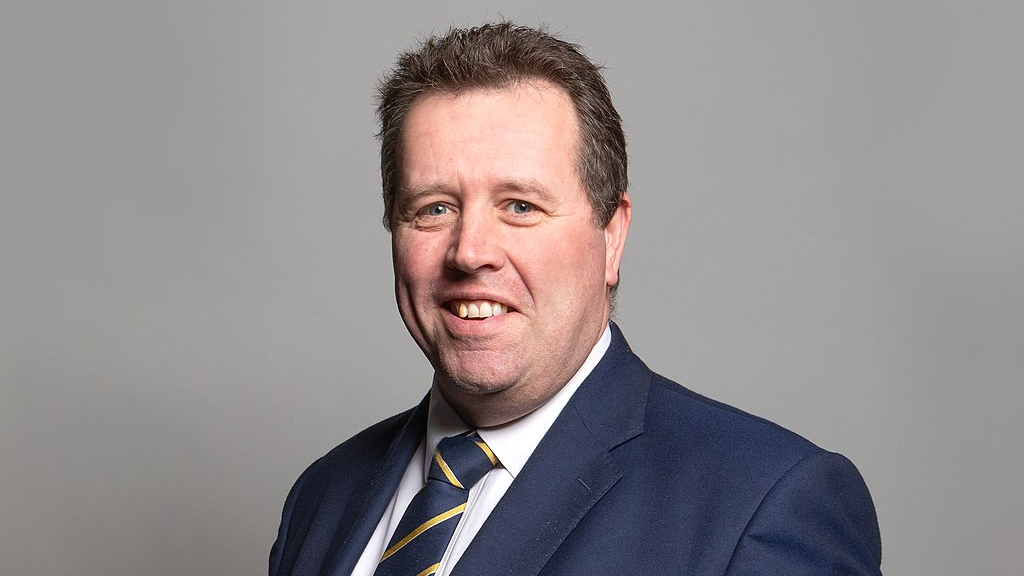 British MP Mark Spencer is being asked to apologize for using a perceived racial slur to describe Chinese people./Richard Townshend/WikiCommons

British MP Mark Spencer is being asked to apologize for using a perceived racial slur to describe Chinese people./Richard Townshend/WikiCommons

UK politician Mark Spencer is being called on to make a public apology after making a "prejudiced" comment about Chinese people in a live television interview.

Spencer, from the UK's ruling Conservative Party, is facing a backlash over a comment he made while defending former British Prime Minister Liz Truss over the hacking of her personal phone by suspected foreign agents.

"We all talk on personal phones, don't we, you know?" he said in a live interview on Sky News in late October. "I ring my wife, maybe there's some little man in China listening to the conversations between me and my wife."

"But, you know, you've just got to be careful about what information you use on which phone and you get a lot of help and support from the security services on that."

Xiaojiu Zhu lives in the UK and works for Cruickshanks solicitors and was so offended by Spencer's remarks she wrote an open letter on behalf of the International Chinese Alliance against Racism demanding an apology.

Zhu's letter stated, "we strongly believe he should apologize publicly and show some respect to Chinese people," and listed over 80 UK organizations that support the request.

"Rishi Sunak pledged to bring 'integrity and accountability' as PM on his first day in No 10. This behavior of his minister certainly fell below the expected standard," the letter continued.

Zhu told CGTN how upset she had been by the remarks, "that is an insult to any Chinese and he (Spencer) has absolutely no right in public to say things like that."

Zhu was overwhelmed by the support she has received from the UK's Chinese community going on to say "we love our country, we love China. We need to keep the reputation, the image of the Chinese, so that (Spencer's comment) is not tolerable." 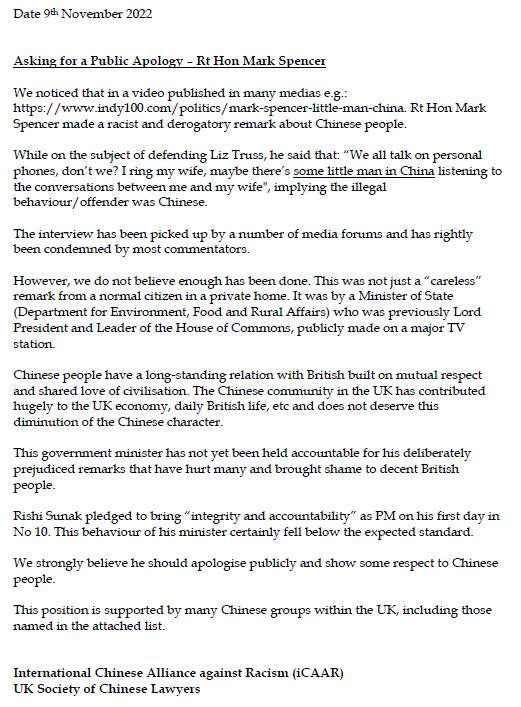 The International Chinese Alliance against Racism has demanded an apology from Mark Spencer following his comments about Chinese people listening to private conversations./iCAAR

The International Chinese Alliance against Racism has demanded an apology from Mark Spencer following his comments about Chinese people listening to private conversations./iCAAR

The International Chinese Alliance against Racism among other anti-racism campaigners has demanded a public apology from the senior MP for using the term and also for implying that a potential phone hacker would be Chinese.

"We do not believe enough has been done," the group wrote in a statement in response to the government's handling of the incident.

"This was not just a careless remark from a normal citizen in a private home," it wrote. "It was by a Minister of State who was previously Lord President and Leader of the House of Commons, publicly made on a major TV station."

The anti-racism network added that Chinese people had "a long-standing relation" with the British built on mutual respect and did not deserve "this diminution of the Chinese character."

"This government minister has not yet been held accountable for his deliberately prejudiced remarks that have hurt many and brought shame to decent British people," the statement read.

"We strongly believe he should apologise publicly and show some respect to Chinese people."