Migrants wait on board a rescue boat as they hope to land in Italy. Max Cavallari / SOS Humanity / AFP

Migrants wait on board a rescue boat as they hope to land in Italy. Max Cavallari / SOS Humanity / AFP

Italy's refusal to allow migrants to land in Sicily has led humanitarian groups to claim it has broken international law and a German rescue charity said it would take legal action. As rescue ships in Catania waited for permission to disembark every last person, a migrant rescue hotline said some 500 others had run into difficulty on the perilous Mediterranean crossing.

A father carrying a baby in a purple beanie was among the first to get off Geo Barents, a ship run by medical charity Doctors Without Borders (MSF). He was one of the lucky 357 people allowed off with Italy refusing entry to 215 others.

Earlier on Sunday, authorities accepted 144 people including children and the sick from the German-flagged Humanity 1, but rejected 35 adult male migrants, the charity SOS Humanity said. The ship was then "ordered to leave the port of Catania," but its captain refused, it said.

The charity said Italian authorities had decided after a "brief medical examination" that the 35 adults were "healthy" but said there was "no translator present to assess their mental and physical condition, nor was there a psychological evaluation."

It stated: "Furthermore, the 35 survivors have the right to apply for asylum, and to a formal asylum procedure, which can only be carried out on land."

The organization said it would be taking legal action and appeals against the government's policy would be submitted to courts in Rome and Catania. Amnesty International urged Italy to stop discriminating, saying "the law of the sea is clear; a rescue ends when all those rescued are disembarked in a place of safety."

Italy was "violating its international obligations," the rights organization said. 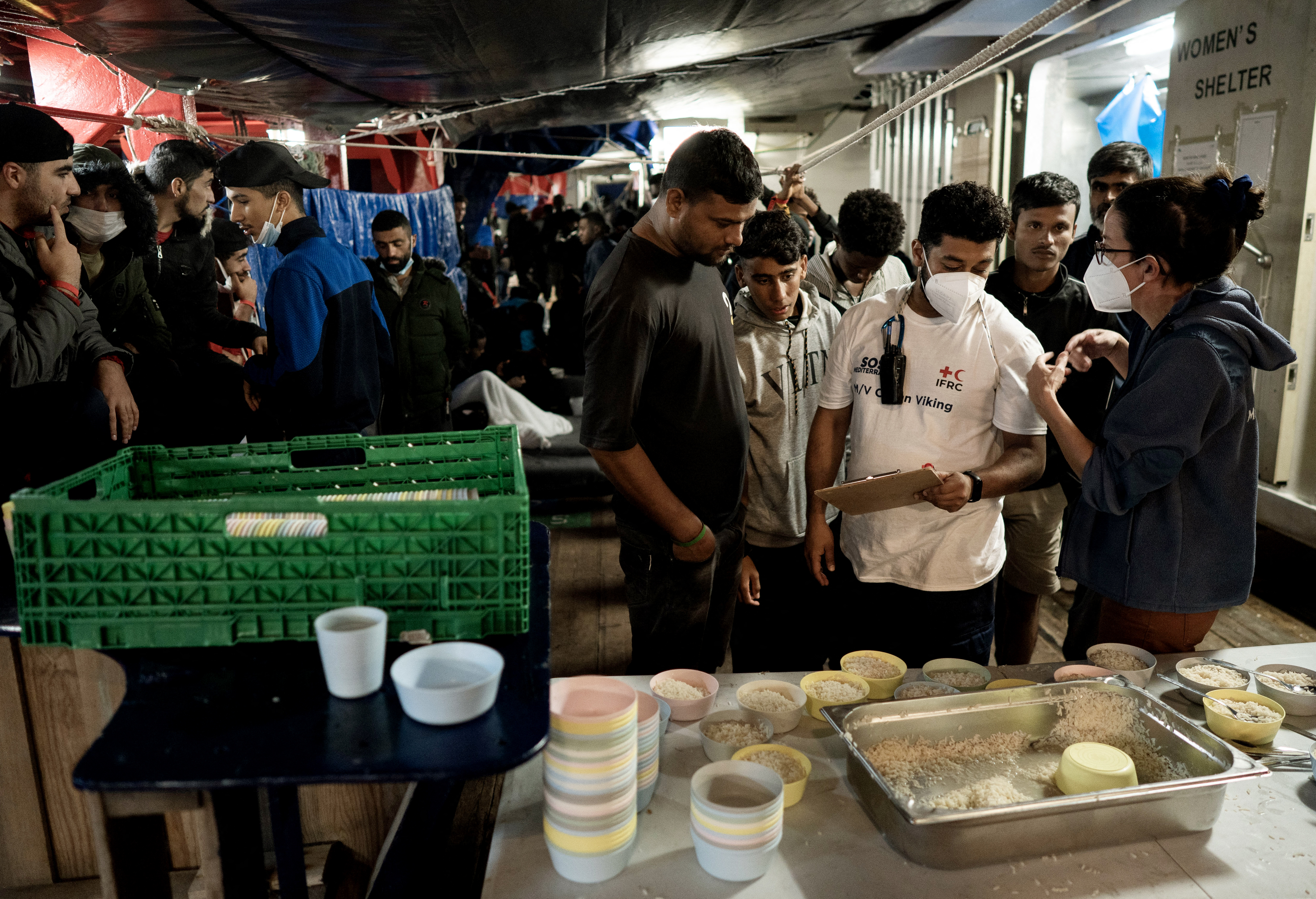 Those refused permission to leave the Humanity 1 were "extremely depressed," SOS Humanity's press officer Petra Krischok said. MSF said the "selective and partial disembarkation" was illegal and accused politicians of "playing with lives."

The Humanity 1 and Geo Barents were two of four ships that had requested a safe port. The Ocean Viking and Rise Above are still off the coast of Sicily. A photographer on the Ocean Viking said there was "tension among the survivors," who were rescued 16 days ago and faced yet another cold night on deck as the weather worsened.

As the vessels waited, Alarm Phone, a group running a hotline for migrants needing rescue, said it had been alerted to "a large boat carrying about 500 people in distress" in the Mediterranean.

Italy's new far-right government has vowed to crack down on migrants attempting the perilous boat crossing from North Africa to Europe. Over 87,000 people have landed in Italy so far this year, according to the interior ministry -- though only 14 percent of those were rescued at sea and brought to safety by charity vessels.

Interior minister Matteo Piantedosi earlier said those who do not "qualify" would have to "leave territorial waters." Sources close to transport minister Matteo Salvini, who controls the ports, said they would be "provided with the assistance necessary" to do so.

Member of parliament Aboubakar Soumahoro, who was present as those chosen from the Humanity 1 disembarked, slammed the "selection of shipwrecked migrants."

The main opposition party said Piantedosi should offer an explanation to parliament.

Piantedosi said Saturday those migrants not allowed into Italy would have to be "taken care of by the flag state" - a reference to the national flags under which vessels sail. The Humanity 1 and Mission Lifeline charity's Rise Above sail under the German flag.

The Geo Barents and SOS Mediterranee's Ocean Viking are registered in Norway. The Norwegian foreign ministry said Thursday it bore "no responsibility" for those rescued by private Norwegian-flagged ships in the Mediterranean.

Germany insisted in a diplomatic message to Italy that the charities were "making an important contribution to saving human lives" and asked Rome "to help them as soon as possible."