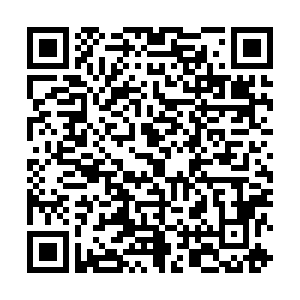 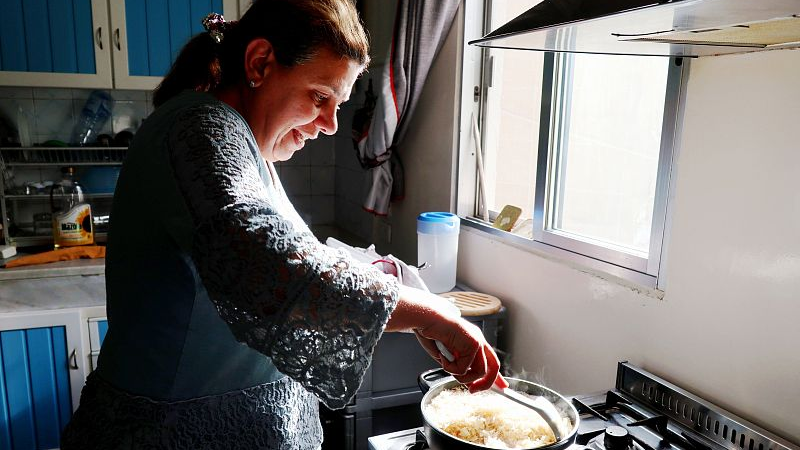 Women are still carrying out more unpaid domestic work according to report. /CFP

Women are still carrying out more unpaid domestic work according to report. /CFP

There is no country anywhere in the world in which unpaid domestic work is evenly distributed among men and women, according to a recent Bill & Melinda Gates Foundation Goalkeepers report.

Melinda Gates, the co-chair of the foundation in charge of the report, says the figures show a situation that's only getting worse.

"Gender equality is falling further and further out of reach," she says, adding "big, global shocks like the pandemic disproportionately destroyed women's livelihoods."

Finns advised to limit use of saunas

Globally, women spend 3.2 times as many hours as men performing unpaid domestic and care work such as cooking, cleaning and taking care of children, with the largest gap between men and women typically being in the North African and West Asian groups of countries.

But European nations are also guilty of failing to hit the equal target ratio of 1:1.

In terms of total time spent doing unpaid domestic and care work, Belgium came out on top globally, with such work accounting for just 2.4 percent of time for women and 2 percent for men.

But Belgium's low percentages were far from typical. In Azerbaijan, 25.4 percent of women's working hours were unpaid domestic work, with Albania and Armenia (both 21.7 percent) and Ireland and Slovenia (both 20.6 percent) close behind.

These are not just dry figures. When unpaid caregiving makes up more than a fifth of women's working hours, women consequently have less time available to earn an income, let alone build a career. 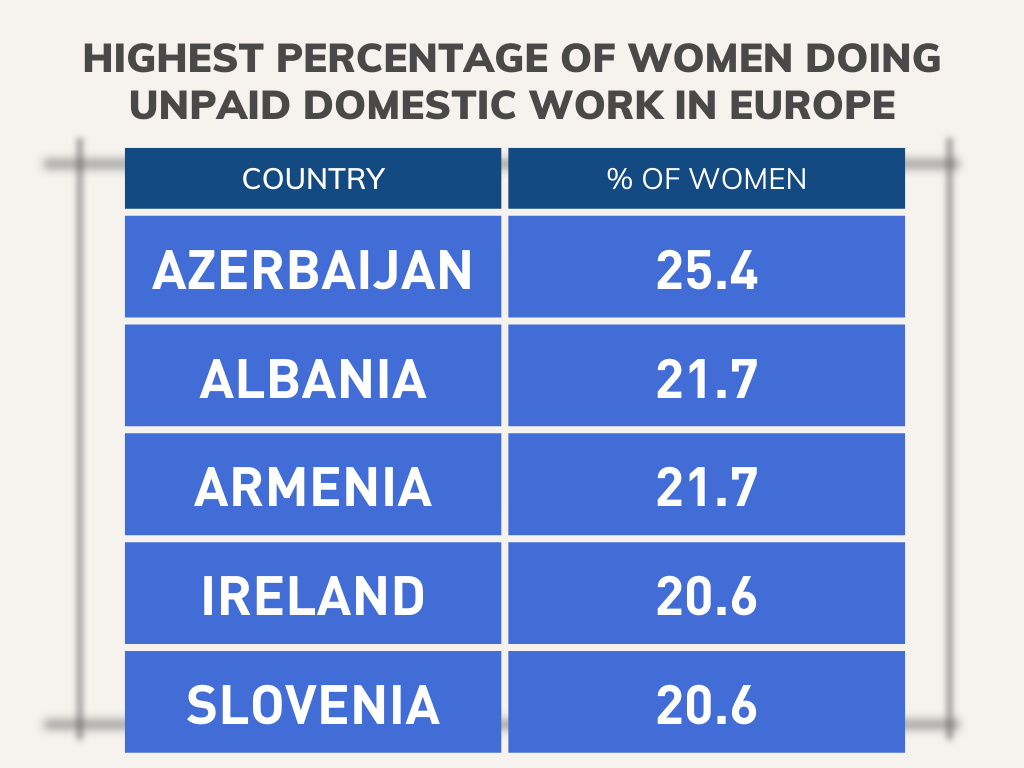 Even at the lower end of Europe's scale, women in all countries bar Belgium spend more than 10 percent of their working time doing unpaid domestic work. The countries closest to Belgium's low percentage are the UK (12.7 percent), Luxembourg (14.4 percent) and the Netherlands (14.7 percent), with a clutch of countries – Finland, Norway, North Macedonia, Denmark and France – also below 16 percent.

By contrast, no European country recorded a figure higher than 12.8 percent of men's working hours being unpaid domestic work. That mark was recorded by Sweden, followed by Norway (12.3 percent) and Denmark (11.3 percent); men in Slovenia, Estonia, Switzerland, Finland and Germany also averaged more than 10 percent unpaid. 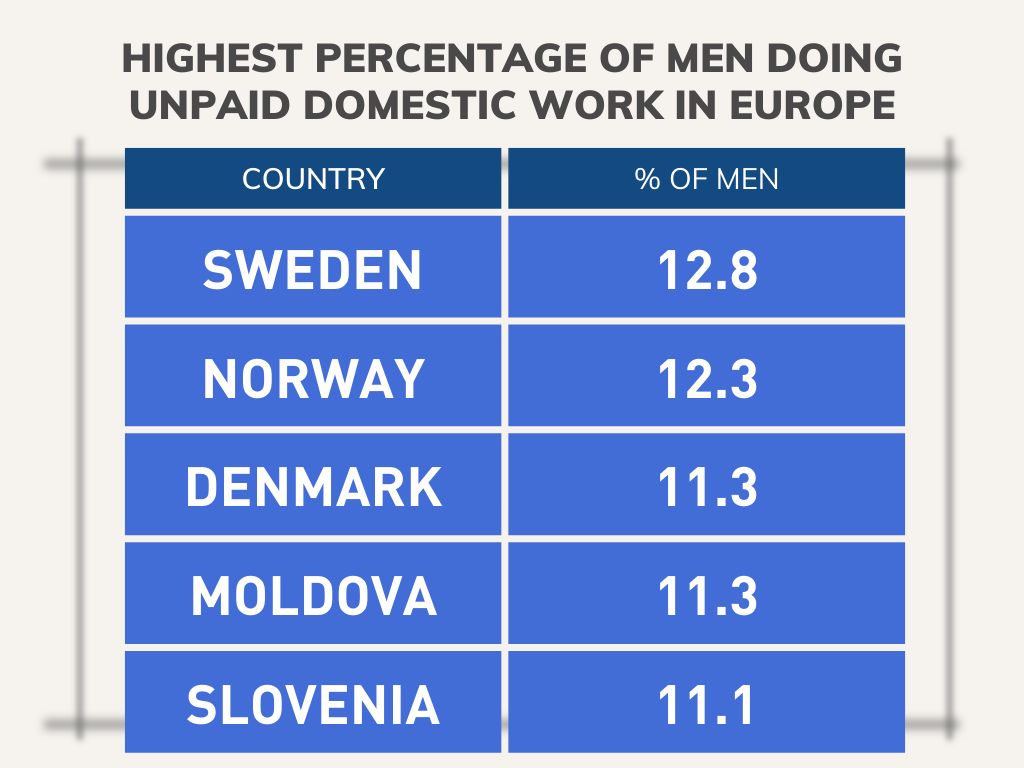 That naturally prompts the question: In which countries are the gender scores the most unequal?

Serial outlier Belgium had the lowest ratio of women's unpaid hours to men's, with women doing 1.2 hours to every man's hour. This still means that, in proportion, women were spending 20 percent longer than men doing unpaid domestic work.

However, elsewhere in Europe the ratio was higher. Albania, with 21.7 women's hours per week to 3.5 men's hours, was Europe's most unequal country with a ratio of 6.2 to 1; Armenia (4.93:1), Azerbaijan and North Macedonia (both 2.85:1) and Ireland (2.29:1) also recorded highly unequal ratios of women's to men's unpaid domestic hours.

How to strive for equality

Despite the deviation from the global target, there does seem to be a degree of improvement, with more attention paid to rectify issue surrounding gender inequality.

"Over the years, efforts to close this gap have centered around providing women with jobs or cash," said Melinda Gates. "These are proven ways to lift measures of economic equality—but even so, true economic power continues to elude millions of women."

Whilst the proportion of women to men doing unpaid domestic work remains unequal, the percentage of men carrying out this type of work has also seen a small increase, with Scandinavian countries in Europe in particular reflecting this increase.

The biggest challenge to equal allocation of domestic work stems from women who take care of their home often not being in charge of their own money, despite having the greatest financial need.

With men more likely to have government ID and appear on tax rolls, it means women are also more often vulnerable to financial hardships – as seen during the COVID-19 pandemic, when emergency monetary help from the government given to families frequently did not reach women staying at home.

As a result, the Foundation believes every woman need to be given full control over their money if the gender equality gap is to ever fully close.

"True equality depends not only on a woman's ability to access a livelihood, but also on her ability to control it fully," said Gates. "It means not just putting food on a kitchen table, but also being able to make decisions for her family around that table.