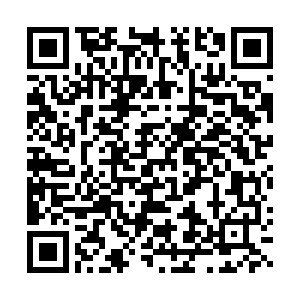 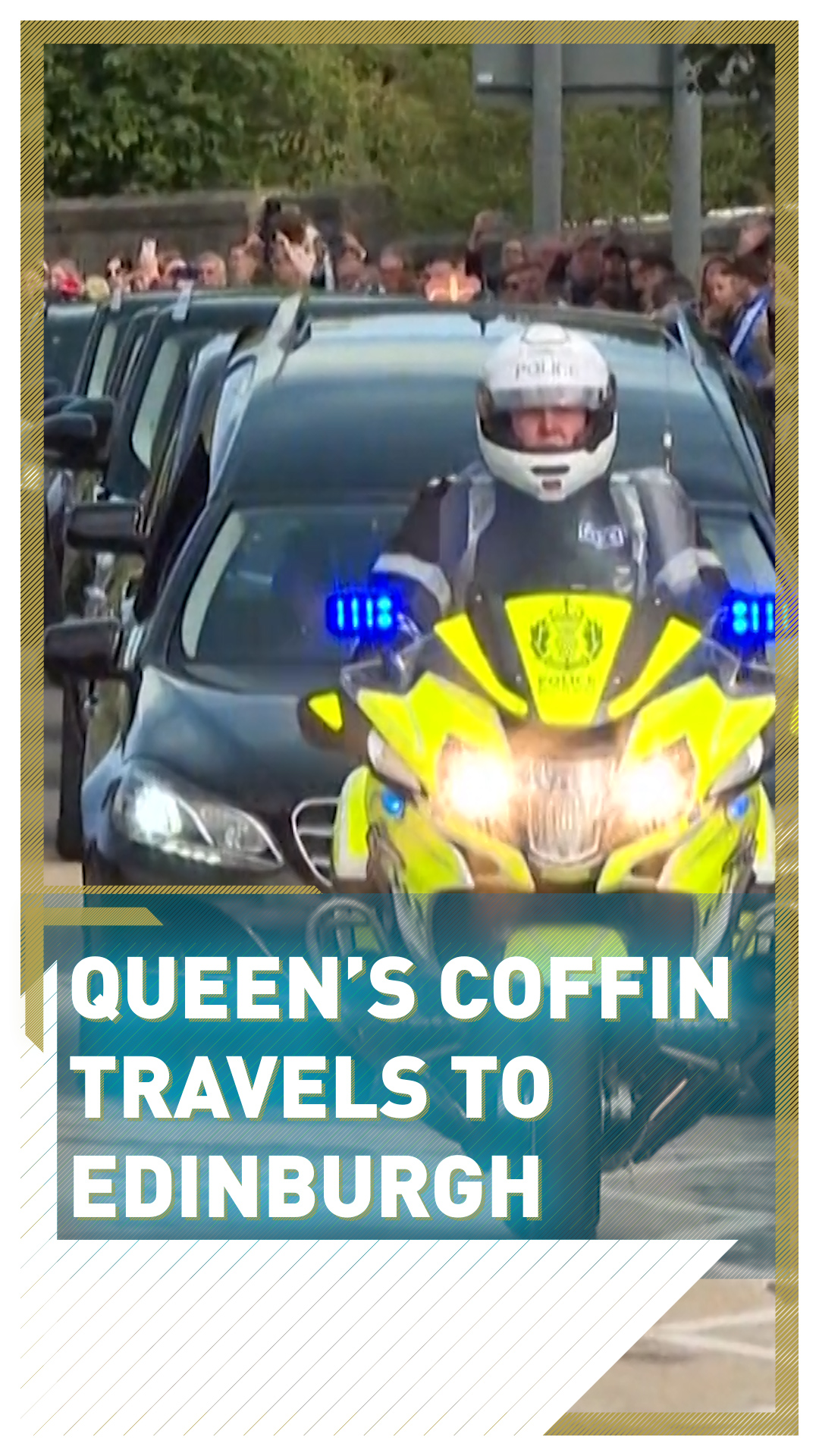 Thousands of mourners lined the route to pay their respects as Queen Elizabeth II's coffin on Sunday headed from her Scottish retreat of Balmoral, where she died, to Edinburgh on the first leg of her sombre final journey.

A hush fell over the gathered crowd as the cortege carrying the Queen's casket exited the gates of Balmoral at the start of an odyssey of mourning that will culminate in her state funeral in London on September 19.

Some well-wishers threw flowers or applauded, while others were in tears as the long convoy led by a black hearse wound its way slowly on a six-hour journey to Scotland's capital, where it will stay for two days.

Six groundskeepers had loaded the oak coffin - draped with a Scottish Royal Standard and a floral wreath - into the hearse that was followed by a Bentley carrying the Queen's only daughter Princess Anne.

The first glimpse of the Queen's coffin for a grieving nation came a day after her son Charles III was formally proclaimed King, and after her warring grandsons William and Harry, and their wives Kate and Meghan, briefly reunited for a walkabout.

The King himself will travel to Edinburgh on Monday for a prayer service, before the body of the Queen, who died at Balmoral on Thursday aged 96, is flown to London on Tuesday.

Britain's longest-serving monarch will then lie in state for four days which is expected to draw at least a million people, ahead of a funeral set to be watched worldwide and attended by numerous heads of state.

Before that in Scotland the Queen's coffin will rest for a day at Holyroodhouse Palace, the monarch's official residence in Scotland. 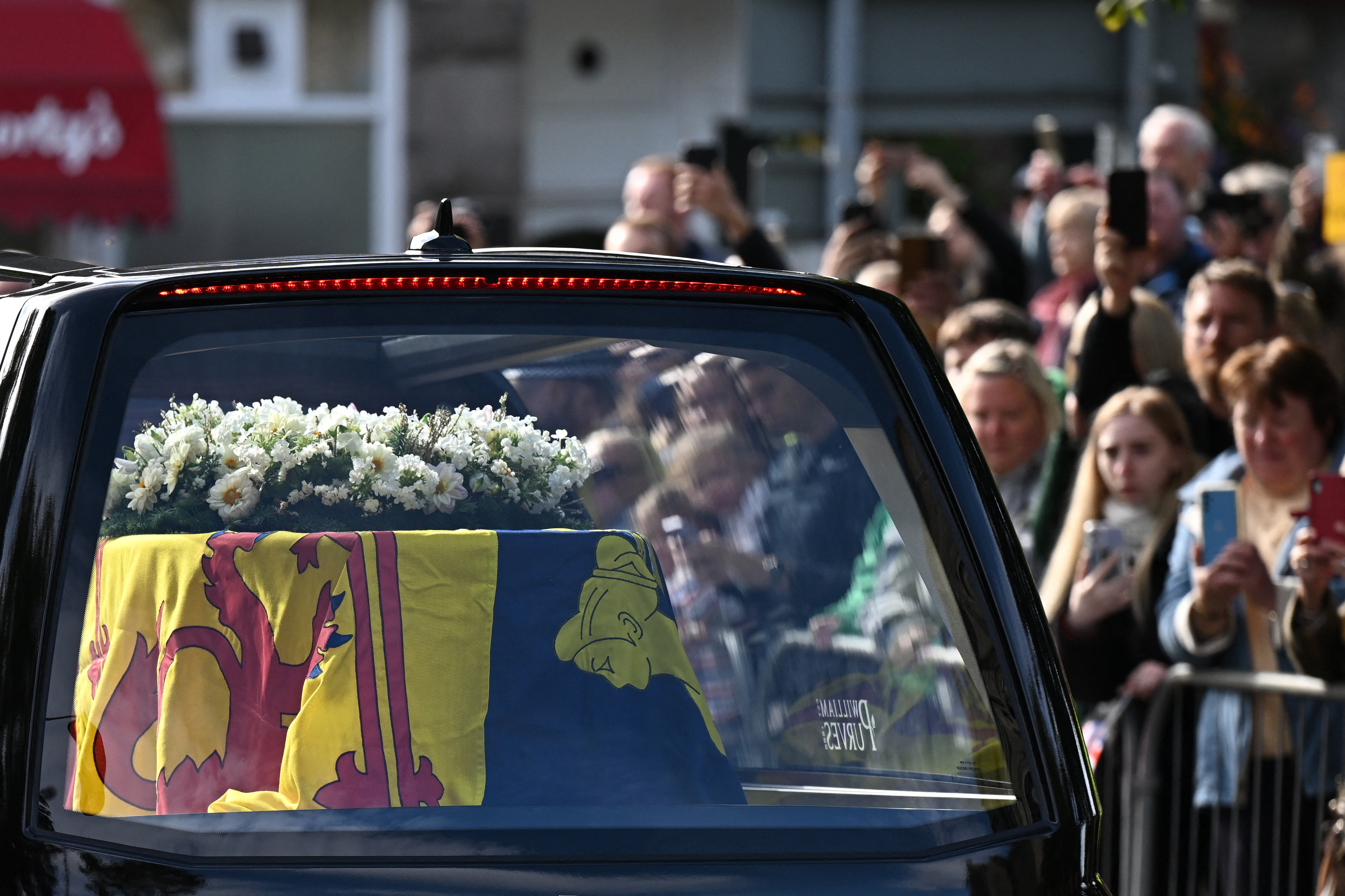 Members of the public pay respects as the hearse carrying the coffin of the Queen, draped in the Royal Standard of Scotland, is driven through Ballater. Paul Ellis / AFP

Members of the public pay respects as the hearse carrying the coffin of the Queen, draped in the Royal Standard of Scotland, is driven through Ballater. Paul Ellis / AFP

King Charles - who was formally proclaimed monarch in Scotland at a ceremony on Sunday - and other royals will on Monday take part in a procession to convey her coffin along Edinburgh's Royal Mile to St Giles' Cathedral.

The following day the coffin will be flown by Royal Air Force jet to Northolt airfield near London, and driven to Buckingham Palace. Then, on Wednesday, it will be moved to Westminster Hall to lie in state.

King Charles will also visit Northern Ireland and Wales in a show of national unity. The new monarch will be joined at memorial services by Prime Minister Liz Truss, who was only appointed by the late Queen on Tuesday.

Charles vowed at the formal Accession Council at St James's Palace on Saturday that he would "strive to follow the inspiring example I have been set" by his mother during her "lifetime of service."

The centuries-old tradition was televised live for the first time, featuring a fanfare of trumpets and a court official wearing a feathered hat to declare him King from a Palace balcony.

Thousands of people have gathered outside Buckingham Palace and other royal residences in recent days to lay flowers and messages of condolence, or simply to experience history in the making.

But officials expect far more people to pay their respects while the queen lies in state, before the televised funeral service at Westminster Abbey opposite.

The funeral for the Queen - who came to the throne aged just 25 in 1952 - will be attended by national leaders including US President Joe Biden, Australian Prime Minister Anthony Albanese and possibly Japanese Emperor Naruhito.

Charles was formally named king in Australia and New Zealand in tandem ceremonies on Sunday.

China's President Xi Jinping, who is not expected to attend the funeral, said he was willing to "expand friendly exchanges and mutually beneficial cooperation" as he congratulated Charles on ascending to the throne.

The Queen's record 70 years on the throne were a constant during a turbulent time for Britain, from a world of post-war deprivation and the loss of its empire, to more recent upheavals like Brexit and the coronavirus pandemic.

Charles' coronation, an elaborate ritual steeped in tradition and history, will take place in the same historic surroundings of Westminster Abbey, as it has for centuries, on a date to be fixed.