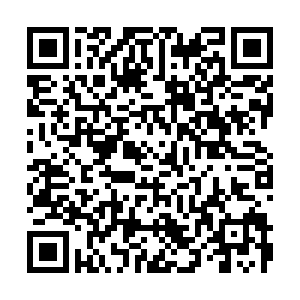 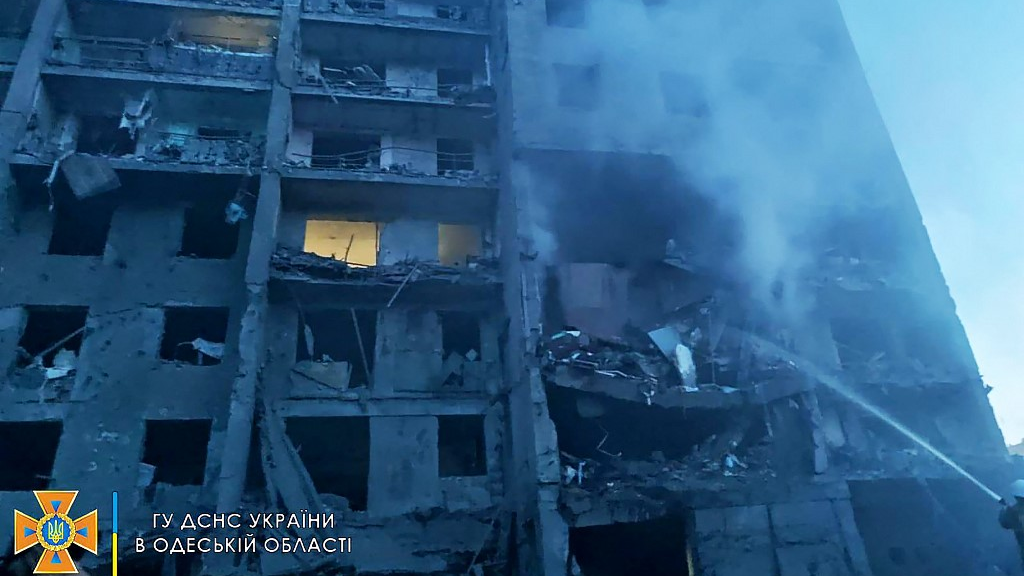 A missile strike in the district of Bilhorod-Dnistrovskyi outside Odesa has killed at least 18 and injured dozens. /Ukraine emergency ministry press service/AFP

A missile strike in the district of Bilhorod-Dnistrovskyi outside Odesa has killed at least 18 and injured dozens. /Ukraine emergency ministry press service/AFP

• Two children were among at least 18 people killed by Russian missile strikes on an apartment block and a resort facility near Ukraine's Black Sea port of Odesa, according to Kyiv. Moscow has denied hitting the apartments. READ MORE BELOW

• Following Russia's withdrawal from the strategic Snake Island, Moscow said its troops were leaving as a "gesture of goodwill." Ukrainian President Volodymyr Zelenskyy said the victory didn't mean "the enemy will not come back," but stressed it "significantly limits the actions of the occupiers." READ MORE BELOW

• Russia has summoned the British ambassador over what it has called "offensive" and "false" British statements, "in particular about alleged Russian 'threats to use nuclear weapons'." Russia's foreign ministry said, "in polite society, it is customary to apologize for such statements," over what it called "frankly boorish statements of the British leadership."

• The city of Lysychansk in Ukraine's eastern Donbas region - the last Ukrainian stronghold in Luhansk - continues to come under sustained bombardment, governor Sergiy Gaiday said. "Residents... barely leave their basements and homes," he wrote on Telegram, adding that Russian forces had taken control of parts of the city's oil refinery.

• President Vladimir Putin has signed a decree to seize full control of the Sakhalin-2 gas and oil project in Russia's far east, a move that could force out Shell and Japanese investors. The Kremlin's move to effectively expropriate foreign stakes in firms operating in Russia is set to further unsettle the world's liquefied natural gas market, and signifies a new risk for Western companies still in the country.

• As Russia reduces gas supplies to the bloc, Ukraine has started exporting electricity to dependent EU countries via Romania. "This is only the first stage. We are preparing to increase supply," Zelenskyy said, adding "a significant part of the Russian gas consumed by Europeans can be replaced."

• The U.S. has not seen China evade sanctions or provide military equipment to Russia, a senior U.S. official has said, stating that U.S. measures taken this week targeted certain Chinese companies, but not the government.

• U.S. basketball player Brittney Griner will appear in a Russian court today facing drug charges that could see her serve 10 years in prison, in a case charged by heightened tensions between Moscow and Washington. The Kremlin said on Friday that the arrest was "not politically motivated." 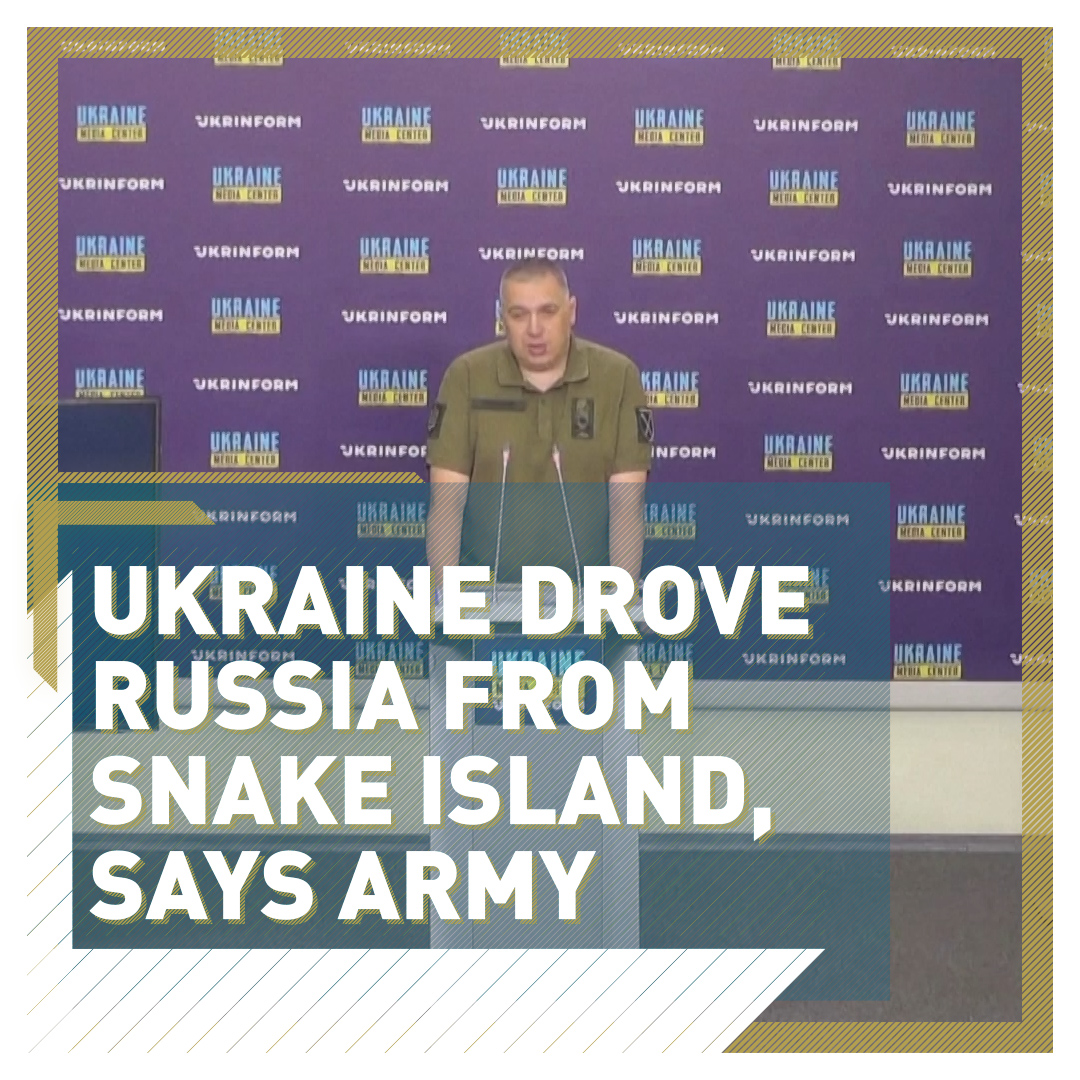 Missiles rain down around Odesa

Russia bombarded the area around Ukraine's Black Sea port of Odesa on Friday, allegedly hitting an apartment building and a resort and killing at least 18 people, according to Ukraine.

Most of those killed were asleep in an apartment building in the village of Serhiivka in the Bilhorod-Dnistrovskyi district at about 1 a.m. when a missile struck. Dozens more were injured.

Video images showed huge destruction as firefighters battled the blaze and combed the rubble for survivors. Emergency services said at least 41 people had been rescued in the building where 152 were living. 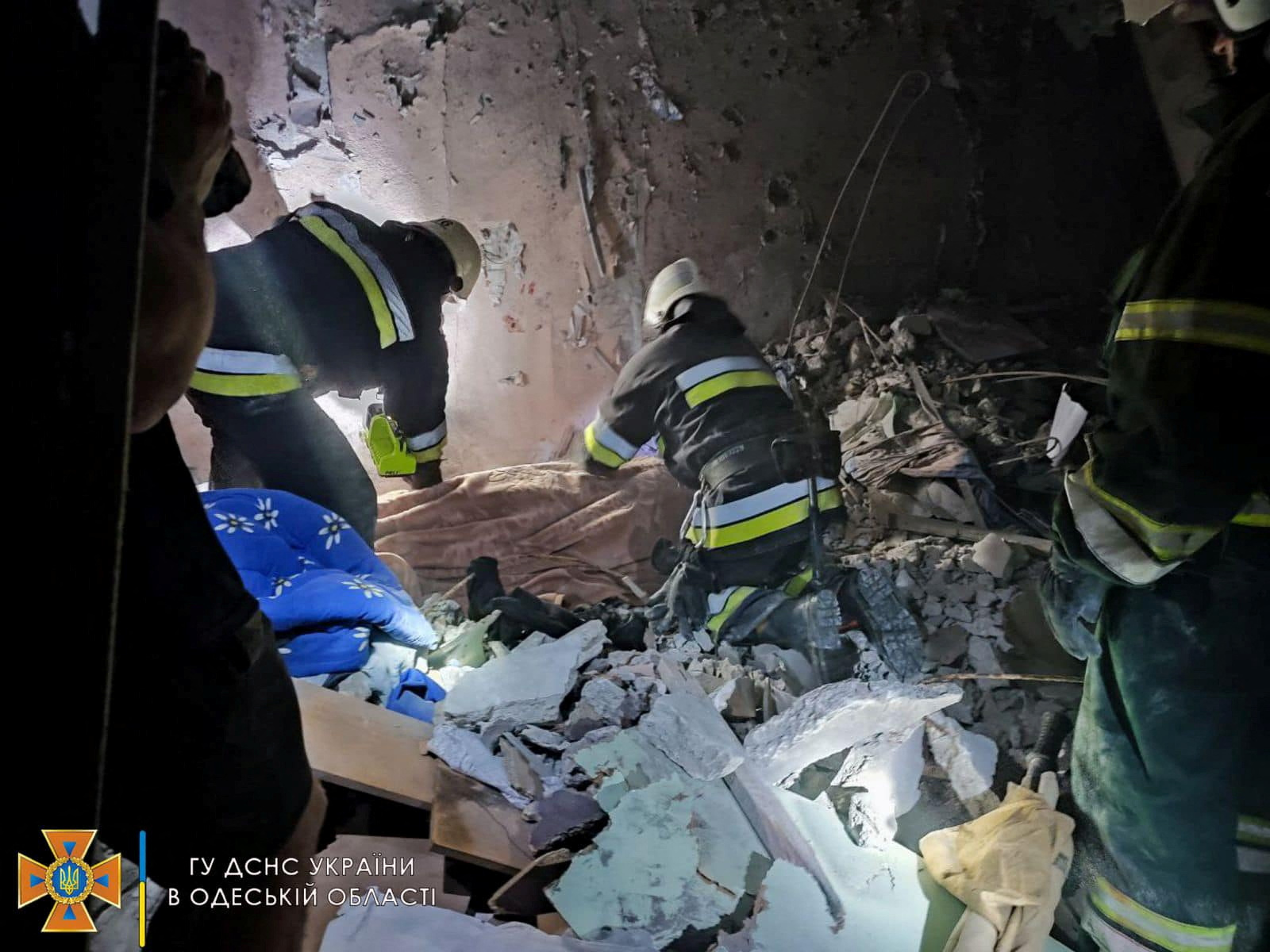 Rescue workers work at the scene of a missile strike in Bilhorod-Dnistrovskyi, Odesa region. /State Emergency Services of Ukraine/Reuters

Rescue workers work at the scene of a missile strike in Bilhorod-Dnistrovskyi, Odesa region. /State Emergency Services of Ukraine/Reuters

The Kremlin dismissed allegations that Russian missiles had struck the apartment building and two holiday camps.

"I would like to remind you of the president's words that the Russian Armed Forces do not work with civilian targets," Kremlin spokesperson Dmitry Peskov said on a conference call with reporters.

Zelenskyy and lawmakers in parliament stood for a minute's silence for the victims of the missile strikes.

The attacks come as Russia is dramatically escalating such aerial strikes on areas far from front lines. That includes a recent attack in central Ukraine that killed at least 19 people in a crowded shopping mall in Kremenchuk.

Moscow says it is striking military targets, but Kyiv has called the attacks war crimes.

A Ukrainian general said on Thursday that Russia could be trying to hit military targets but was killing civilians by firing inaccurate, obsolete missiles into populous areas. 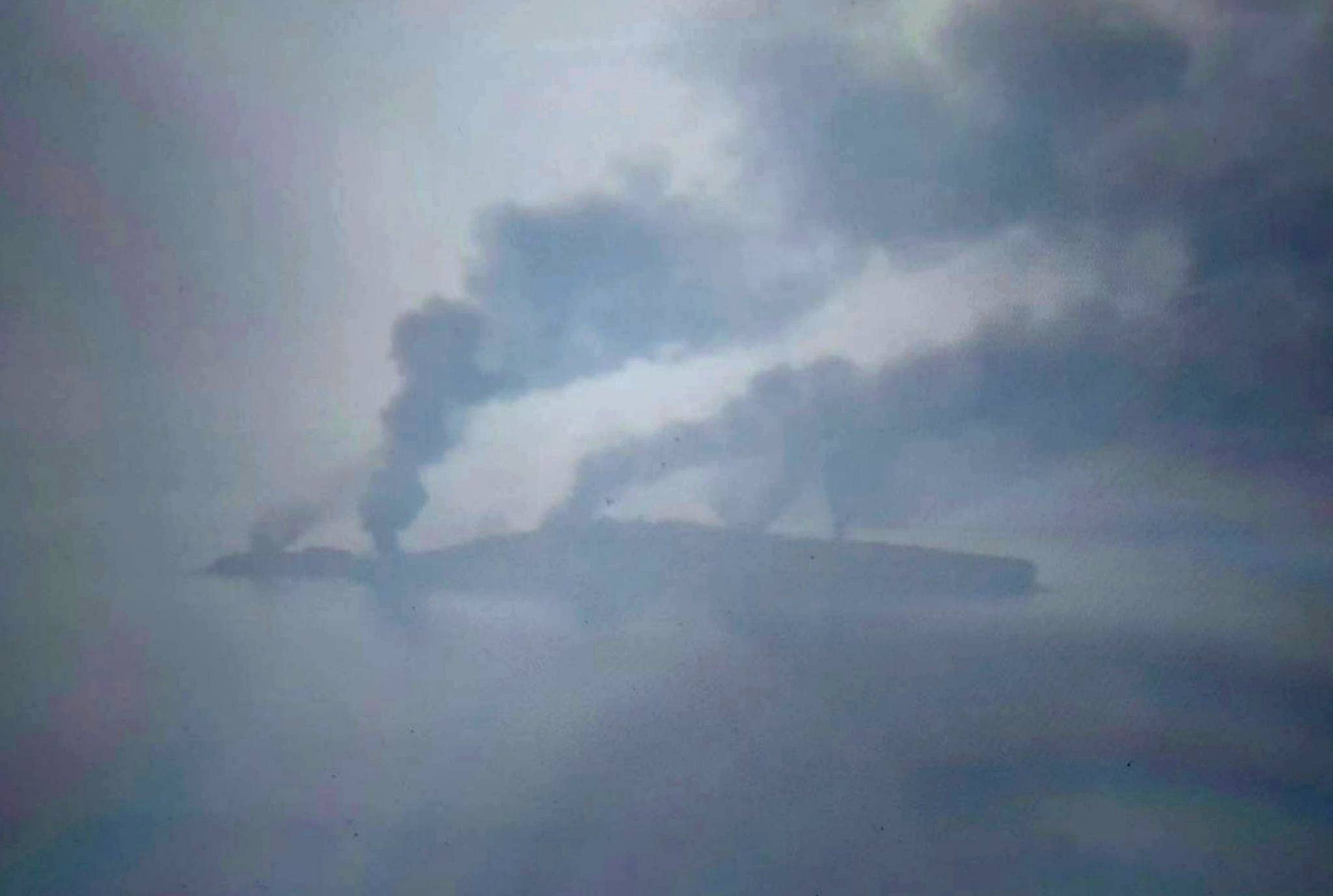 A day earlier, Russia pulled its troops off Snake Island, a strategically important island in the Black Sea that it seized on the conflict's first day, using it to control the waters around blockaded Odesa and other ports.

In his nightly video address, President Zelenskyy hailed what he described as a strategic victory.

"It does not yet guarantee security. It does not yet ensure that the enemy will not come back," he said. "But this significantly limits the actions of the occupiers. Step by step, we will push them back from our sea, our land and our sky." 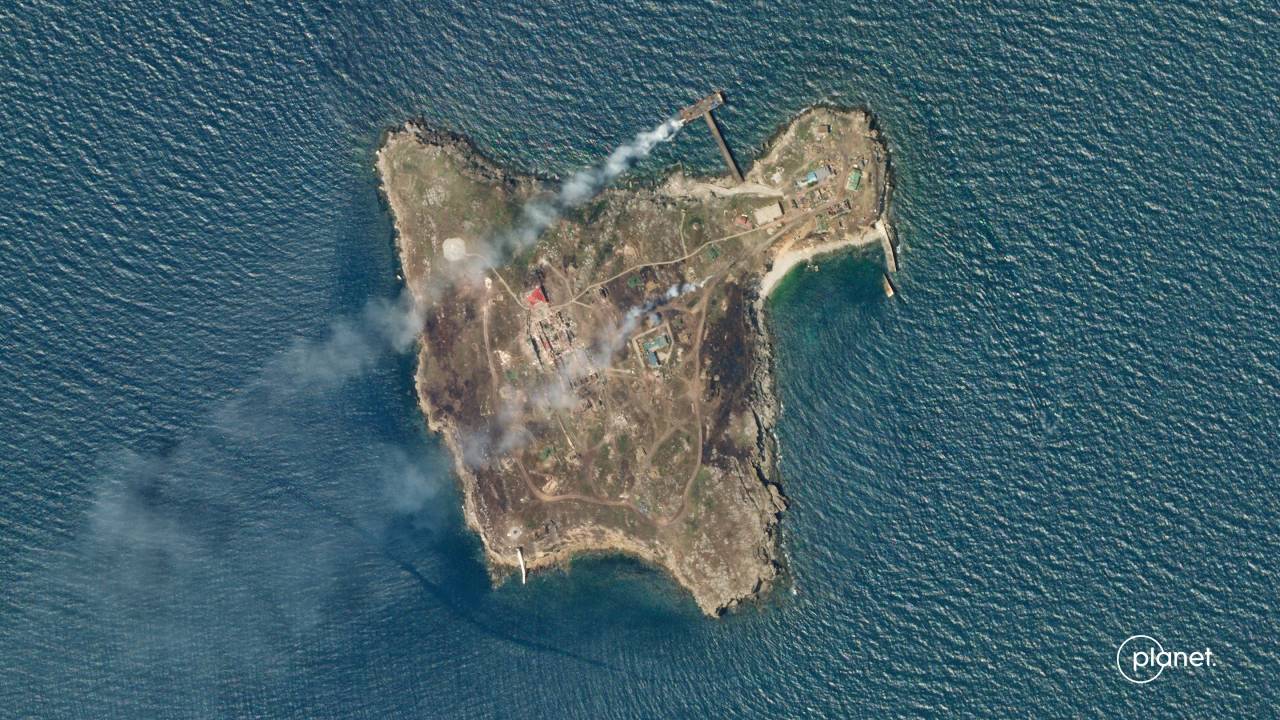 However, Russian forces eventually took the island and have kept up a sea blockade on Ukraine, one of the world's biggest grain exporters, heavily damaging its economy but also threatening global food security and famines.

Moscow denies it is to blame for the food crisis, which it says is caused by Western sanctions and Ukrainian sea mines.

Russian defence ministry said the withdrawal was a "gesture of goodwill", showing Russia was not impeding United Nations efforts to organize a humanitarian corridor to export agricultural products out of Ukraine.

Russians forces withdrawing from Snake Island could be a step towards reopening Odesa's port, although military analysts say Russia could still threaten cargo ships at sea.