Download
What is Kaliningrad? The 'European' part of Russia
Patrick Rhys Atack

You might have guessed by its name - Kaliningrad is a Russian city and region. But it's separated from the majority of its nation by the Baltic states and Belarus.

It's in the news this week because Lithuania, the Russian enclave's direct northeastern neighbor, has banned the transit of some goods through its territory from the 'mainland' to Kaliningrad - and Russia has threatened retaliation.

The region is sandwiched between Poland and Lithuania, and the Baltic Sea./AFP

The region is sandwiched between Poland and Lithuania, and the Baltic Sea./AFP

The region was historically part of Prussia, and later Germany. Known as Königsberg, or 'King's Mountain,' it centered around a Hanseatic port city which was later the home of the Teutonic Knights - a powerful ruling elite in the days before Germany was unified.

But all that changed in the late 19th and first half of the 20th century.

When the German states came together to form one country in the 1870's, it included Prussia - the northern part of which is now Poland  - along with Konigsberg and what is now Kaliningrad oblast. It remained that way for nearly 50 years.

Konigsberg was first part of an enclave in 1918, when the Versailles Treaty following the First World War split Germany by creating a sliver of Poland stretching to the coast, and putting a strip of land between the Danzig (Gdansk) region and the rest of the nation. Konigsberg was the easternmost city in that key region.

As students of history might recall, this 'splitting' of Germany was one of the parts of the Versailles Treaty which angered many Germans and arguably led to the rise of Nazism and the Second World War.

At the end of the 1939-45 conflict, the USSR and its 'Red Army' had reached the Baltic coastline - and its leader Stalin didn't want to give up such a strategically important port.

The Potsdam Agreement, which arranged the borders and states of Europe after 1945, gave Kaliningrad to the USSR. But then important decisions were made.

Firstly, the city and region were renamed Kaliningrad - after Mikhail Kalinin, an influential Bolshevik who rose to become an ally of Stalin and held important (if essentially powerless) positions in the Russian Soviet Federative Socialist Republic.

Secondly, it was decided the oblast would become part of the SFSR (Russia) rather than one of the Baltic Soviets which were also parts of the USSR.

That decision had long-reaching ramifications for the region and Europe right up until today. 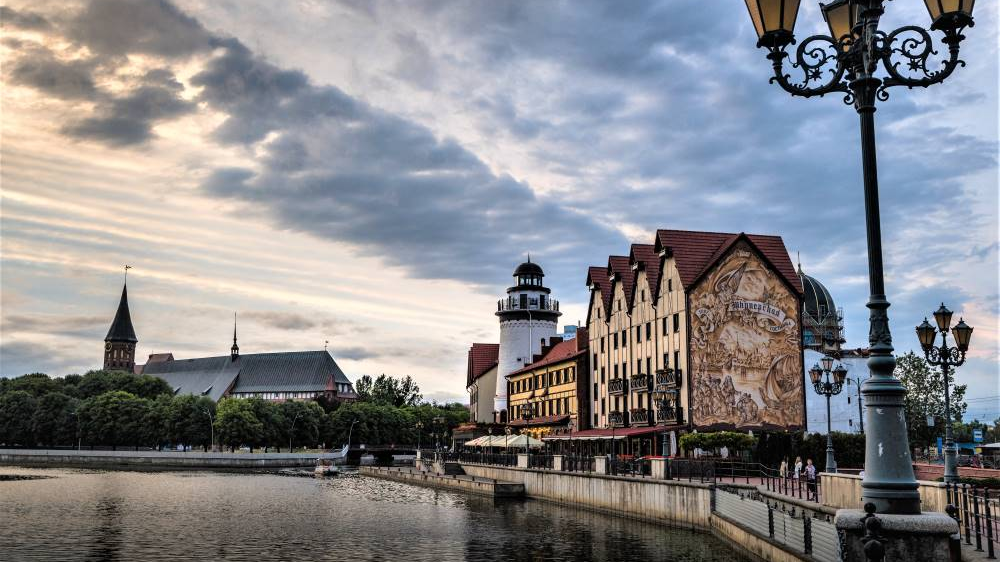 It gives Russia a link to the EU - both its borders are shared with EU member states - and a year-round Baltic port for trade.

Kaliningrad is the only Russian Baltic port which doesn't freeze over in the winter. For trade with Europe, and from Russia's western regions, having the port all year is invaluable. Without it, goods would have to be delivered to southern Russian ports like Novorossiysk on the Black Sea, before an even longer journey by ship to reach the Atlantic.

The climate and location makes it a military asset, too. The Russian navy's Baltic Fleet is based in Kaliningrad.

And it's a tourist hotspot, both literally and metaphorically.

The region averages 23 degrees celsius in summer, and with its history and its access to the sea it's a popular destination for Russian sunseekers.

That's not to say others don't visit; in 2018 the city hosted several games of the FIFA World Cup, and the region is home to several spa towns like Svetlogorsk.

Although it's a small region, home to around half a million people, Kaliningrad is popular with those who are born there… Perhaps its most famous son is the philosopher Immanuel Kant - he never actually left the city limits in his 79 years, though his work traveled much further.