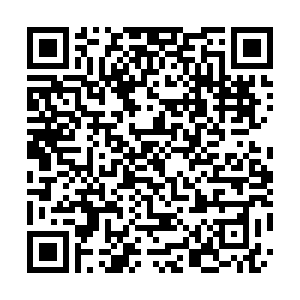 Emergency services at a residential building in a Kyiv district after it was bombed. Sergei Supinsky / AFP

Emergency services at a residential building in a Kyiv district after it was bombed. Sergei Supinsky / AFP

• U.S. President Joe Biden has urged the West to stay united against Russian aggression in Ukraine at a meeting ahead of the G7 summit. "We have to stay together," he said, adding that Vladimir Putin was hoping that "somehow NATO and the G7 would splinter." READ MORE BELOW

• German Chancellor Olaf Scholz was praised for his leadership as current chairman of the G7, by Biden, who said: "I want to compliment you for stepping up as you did when you became chancellor and the way you had a great impact on the rest of Europe to move, particularly relating to Ukraine."

• Russian missiles have hit Kyiv's ​​Shevchenkivskiy district, partially destroying a nine-story apartment building and causing a fire, said the city's mayor Vitali Klitschko. "There are people under the rubble," Klitschko said. He added that several people had already been admitted to hospital. READ MORE BELOW

• World powers have agreed to ban gold exports from Russia, in new concerted action to cut off Moscow's financial lifeline as G7 leaders look at new ways of supporting Ukraine.

• Indonesia's President Joko Widodo said he will urge his Russian and Ukrainian counterparts to open room for dialogue during a peace-building mission to the warring countries and ask Russia's Vladimir Putin to order an immediate ceasefire. "War has to be stopped and global food supply chains need to be reactivated," Widodo said.

• Russian Defense Minister Sergei Shoigu inspected Russian troop units involved in Ukraine, the ministry said. "At the command posts of Russian units, Army General Sergei Shoigu heard reports from the commanders on the current situation and actions of the Russian Armed Forces in the main operational areas," a statement read.

• Ukrainian President Volodymyr Zelenskyy said Ukraine would win back all the cities it had lost to Russia, including Sievierodonetsk. He also said on Saturday night Ukraine had been hit by 45 Russian missiles and rockets over the previous 24 hours.

• Russia is using its reserve forces in a covert mobilization to replenish its ranks in eastern Ukraine and there is no point in simply waiting for its offensive potential to fizzle out, the head of Ukraine's military intelligence agency said. Kyrylo Budanov, head of the Defence Intelligence of the Ministry of Defence, believes Ukraine can only achieve victory against Russia through military force.

• Russia's invasion of Ukraine has made the international community realize the importance of the rule of law, says ICC prosecutor Karim Khan. "If we don't hold on to the law today, I think there is very little hope for anybody's tomorrow," Khan said. 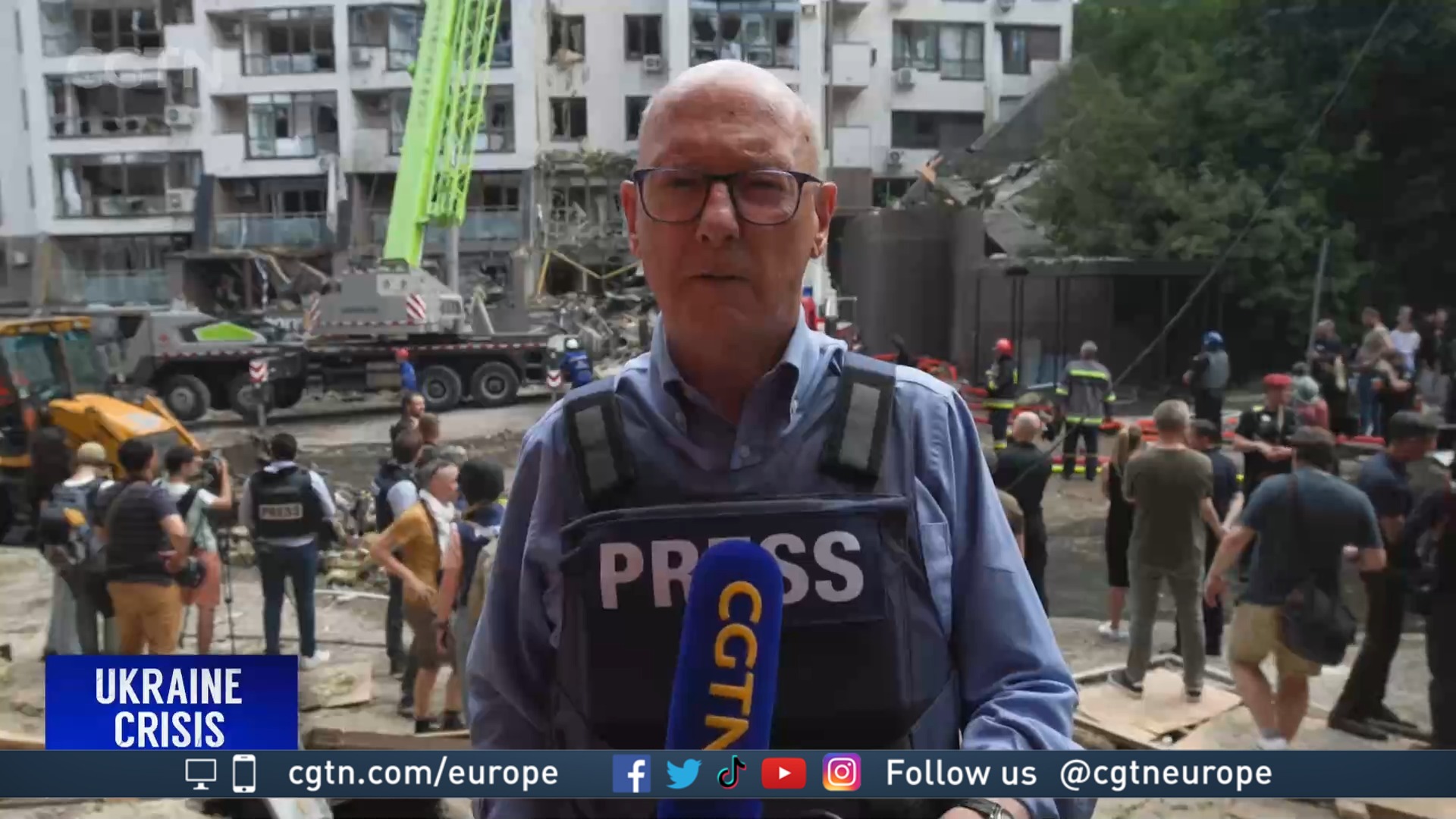 Russian strikes hit a residential building in Kyiv on Sunday, the first attacks on the capital in almost three weeks, sparking calls by Ukraine for more support from G7 leaders meeting in Germany.

Four people, including a seven-year-old girl, were taken to hospital following the early morning strikes in a neighborhood near a weapons factory, said Kyiv mayor Vitali Klitschko.

He said it was a Russian missile strike intended to "intimidate Ukrainians" ahead of a NATO summit in Madrid later this week.

Ukrainian Foreign Minister Dmytro Kuleba posted on Twitter a photo of an injured child being carried on a stretcher, saying she had been "sleeping peacefully in Kyiv until a Russian cruise missile blasted her home."

The "G7 summit must respond with more sanctions on Russia and more heavy arms for Ukraine," he said.

Ukrainian President Volodymyr Zelenskyy will address both the G7 and NATO gatherings. 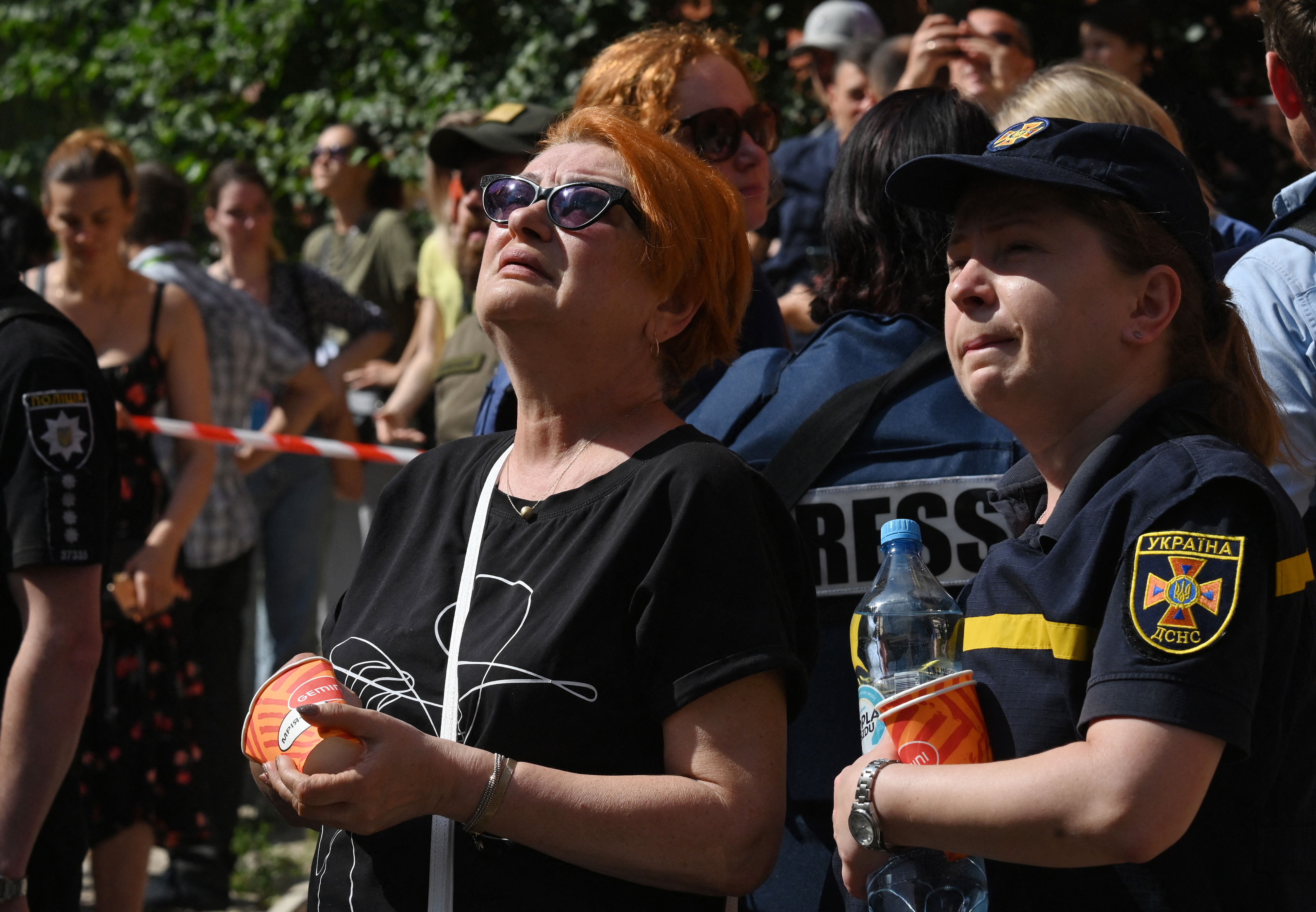 People look on in horror after the latest bombing of high-rise building in Kyiv. Sergei Supinsky / AFP

People look on in horror after the latest bombing of high-rise building in Kyiv. Sergei Supinsky / AFP

At their meeting in the Bavarian Alps, the G7 allies will take stock of the effectiveness of sanctions imposed so far against Moscow, consider possible new aid for Kyiv, and begin turning their eye to longer-term reconstruction plans.

The summit opened with the announcement of a ban on imports of Russian gold and an appeal by US President Joe Biden for a unified approach, saying: "We have to stay together."

The European Union this past week offered a strong show of support when it granted Ukraine candidate status, although the path to membership is long.

Russian forces sought to encircle Kyiv in the first few weeks after the February 24 invasion, but Sunday's attack was the first strike on the capital since early June.

But it was the third time since February that the northwest neighborhood of Shevchenkivskiy has been hit. A weapons factory nearby produces air-to-air and anti-tank rockets among others.

Afterwards, residents gathered at the bottom of one building, many of them in tears.

"I woke up at the first explosion, went to the balcony and saw missiles falling and heard a huge explosion - everything vibrated," 38-year-old Yuri said.