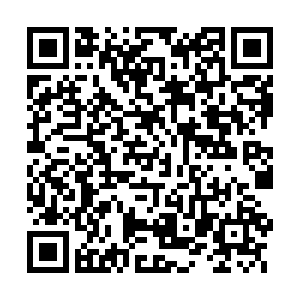 • Fierce fighting continues in the Donbas city of Sievierodonetsk and its surrounding settlements, as Russia captured two villages to the south of the strategic battleground. Luhansk Governor Serhiy Gaidai said nearby Lysychansk was now "within reach of their fire, it is very dangerous in the city."

• Russian forces are bombarding Kharkiv and its surrounding areas, killing at least 20 people. Kyiv said Moscow was attempting to force it to divert troops and weapons to protect civilians there.

• EU leaders will formally accept Ukraine and Moldova as EU candidates on Thursday, a largely symbolic move, but described by European Council President Charles Michel as "a decisive moment" for the bloc.

• However, Albanian Prime Minister Edi Rama warned against any unreasonable "illusions" for a speedy process. "North Macedonia is a candidate for 17 years if I have not lost count, Albania since eight, so welcome to Ukraine," Rama said.

• Britain has introduced a new set of trade sanctions against Russia, with measures including export bans on a range of goods and technology, including jet fuel, sterling and European Union (EU) denominated banknotes.

• Moscow is developing a "practical" response to Lithuania's ban on the transit of goods to the Russian exclave of Kaliningrad, Kremlin officials have announced.

• Two drones flying from Ukraine have fired on Russia's Novoshakhtinsk oil refinery, near the border, forcing it to suspend production.

• Ukraine is expected to hold a preliminary hearing in its first trial of a Russian soldier charged with raping a Ukrainian woman during the conflict.

• Two Britons and a Moroccan sentenced to death for fighting with Ukraine and are preparing to appeal at a court in the Russian-backed, self-proclaimed breakaway statelet of Donetsk People's Republic, according to TASS news agency.

• Turkey is taking seriously claims that Russia stole Ukrainian grain and is investigating the allegations, according to Foreign Minister Mevlut Cavusoglu.

• Volodymyr Zelenskyy has compared Vladimir Putin to fictional dark wizard Lord Voldemort from J.K. Rowling's books after a student in Canada said the Ukrainian leader was like the franchise's protagonist, Harry Potter. "Harry Potter is better than Voldemort, and we know who is Voldemort in this war, and who is Harry Potter, so we know how the war will end," said Zelenskyy. 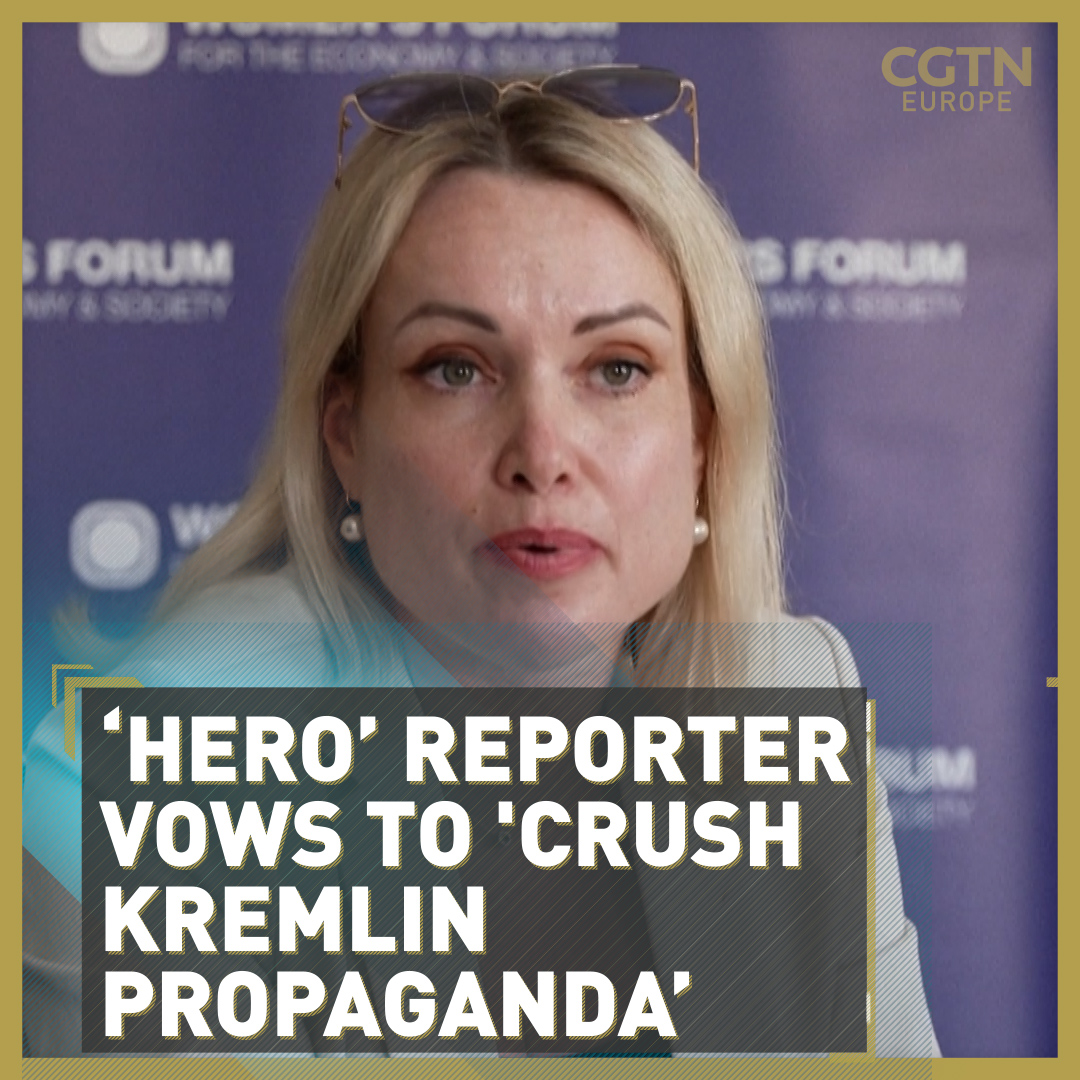 Moscow said more delays in repairs along the pipeline between Russia and Europe could lead to the suspension of all flows.

The EU has rules to prevent and respond to a disruption in gas supplies, with member states required to have plans in place for different levels of disruption. Many of them mean switching to emission-heavy coal power.

Here's a summary of actions by individual European governments so far, in the event that Russia really does turn off the taps:

Austria, which gets around 80 percent of its gas from Russia, has activated the first step of a three-stage emergency plan and is also looking at diversifying gas supply and converting a gas-fired power plant to generate electricity from coal.

Bulgaria, which relies on Russia for over 90 percent of its gas, has agreed to purchase U.S. liquefied natural gas (LNG) and has stepped up talks with Azerbaijan to increase gas deliveries.

Czechia will replaced a reduction in gas deliveries from Russia's Gazprom with volumes from other sources, while Denmark has activated the first step of its emergency gas supply plan, urging consumers and companies to reduce consumption. 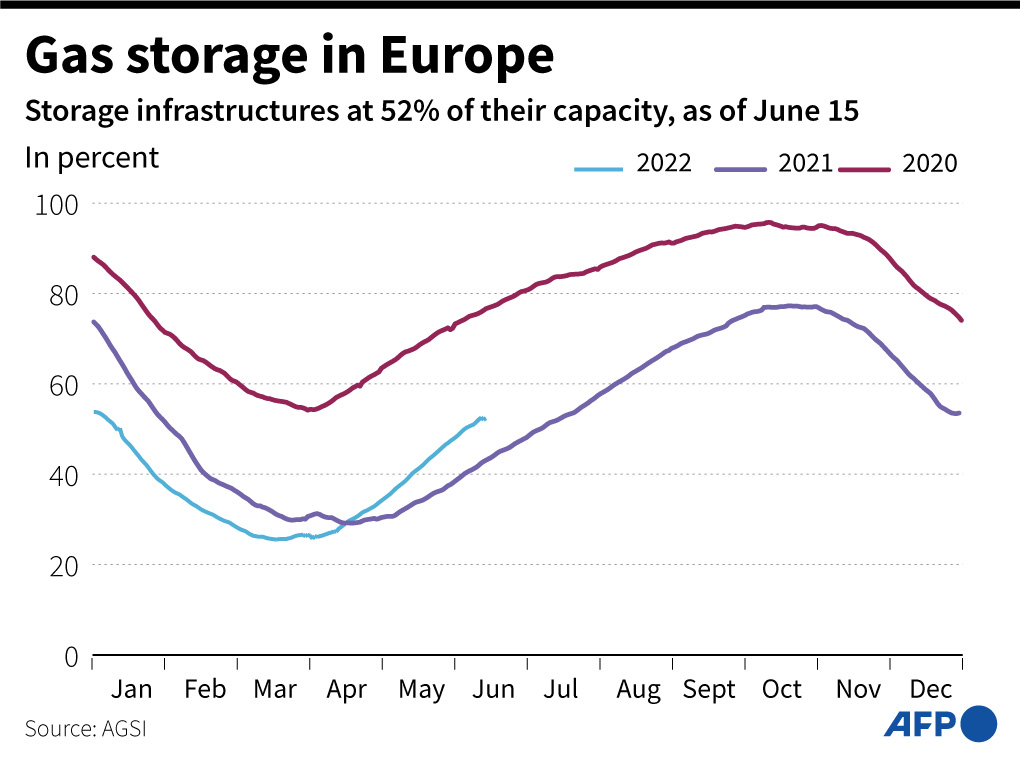 Chart showing changes in gas storage in Europe, at 52 percent of storage capacity as of June 15. /Laurence Saubadu, Patricio Arana/AFP

Chart showing changes in gas storage in Europe, at 52 percent of storage capacity as of June 15. /Laurence Saubadu, Patricio Arana/AFP

France, where Russian gas accounts for 20 percent of supplies, put in place measures in April that can be invoked to limit gas supply to customers in the event of shortages, and called on shippers to fill underground storage ahead of next winter.

Germany has entered Phase 2 of its three-stage emergency gas plan, but is not yet triggering a clause that lets utilities pass on skyrocketing gas costs to customers. It is reliant on Russia for 55 percent of its gas needs.

Greece, which uses gas mainly for power generation, will get additional quantities of LNG and switch four gas-fired plants to diesel in an emergency, while also increasing coal mining in the next two years as a temporary measure.

Italy, on 40 percent Russian gas, announced plans to maximize the use of coal-fired power plants, as well as initial measures to boost gas storage.

The Netherlands, on 15 percent, will activate the early warning phase of its energy crisis plan and lift a cap on production by coal-fired power plants, while Poland will introduce gas rationing, in the case of risk to Russian gas supplies, which make up 50 percent of its stocks.

Neither Spain nor Portugal counts Russia among its main providers, but Sweden has also activated the first stage of the three-part emergency plan.