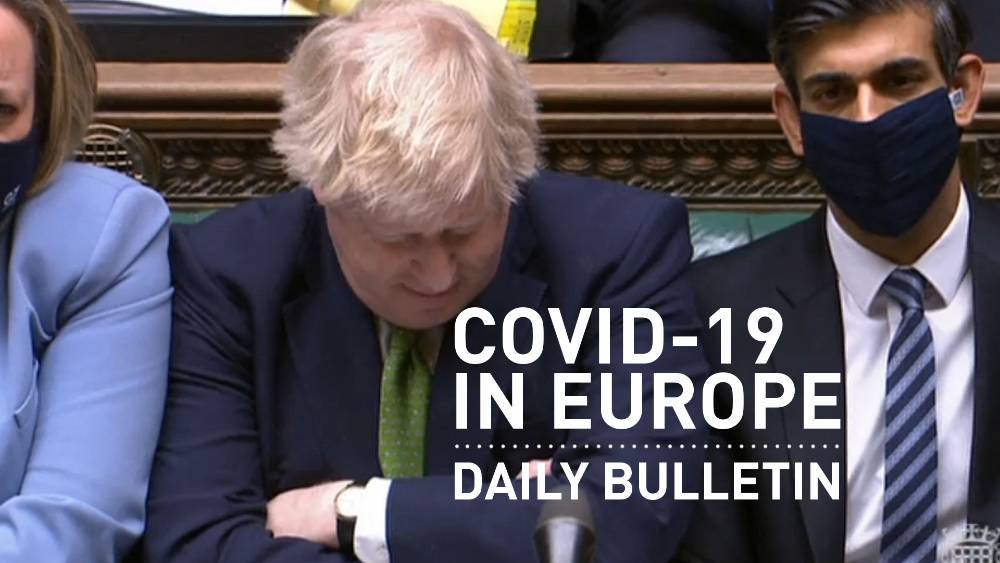 - The pandemic is "nowhere near over," warned the director-general of the World Health Organization. Tedros Adhanom Ghebreyesus added: "With the incredible growth of Omicron globally, new variants are likely to emerge, which is why tracking and assessment remain critical."

- Under-pressure UK Prime Minister Boris Johnson relaxed all COVID-19 rules today, in what his critics say is an attempt to distract from the ongoing scandal over parties at his official Downing Street residence, which may yet topple his premiership.

Johnson said none of the so-called Plan B measures would remain, as face masks would not be legally enforced anywhere, COVID passes would not be mandatory and advice to work from home would end. "Many nations across Europe have endured further winter lockdowns ... but this government took a different path," Johnson told lawmakers, saying the government had got the toughest decisions right and that numbers going into intensive care were falling.

"Our scientists believe it is likely that the Omicron wave has now peaked nationally ... because of the extraordinary booster campaign, together with the way the public have responded to the Plan B measures, we can return to Plan A," he said.

- Museums and venues in the Netherlands opened briefly on Wednesday to protest at their continued closure under a COVID-19 lockdown, offering yoga sessions in front of paintings by Dutch masters and haircuts to the music of a live orchestra.

The Netherlands eased a month-long lockdown last weekend, allowing gyms, hairdressers and shops to reopen. But cultural venues were ordered to remain closed to the public until at least January 25. "I simply don't understand why the measures are still so strict, preventing cultural events from happening," said Alexandra Gerny.

- Switzerland will extend coronavirus quarantine and work-from-home rules until the end of February and plans to keep other curbs on public life until the end of March. Those measures included the need for people to prove they have been vaccinated or recovered from COVID-19 to gain entry to many indoor venues, as well as making working from home mandatory. The cabinet last week proposed extending all the restrictions until the end of March but encountered resistance from regional authorities who wanted a shorter duration.

- The Hungarian opposition's candidate for prime minister, Peter Marki-Zay, said on Wednesday he was isolating at home after testing positive for the coronavirus but that he hoped to quickly return to campaigning for a closely fought general election. Hungary is grappling with record new infections driven by the Omicron variant, although hospitalizations are so far low and most people have some vaccine protections. Marki-Zay said on his official Facebook page that he had received three vaccine shots and was hoping to get back on the campaign trail in five days if he has a negative test then.

- Czechia's government is due to decide on Wednesday whether to retain mandatory vaccinations for workers in key professions and people aged over 60 as the daily tally of new coronavirus cases hit a record high. Authorities said 28,469 new COVID-19 cases were reported on Tuesday, more than double the 12,371 reported for Tuesday last week.

- Germany reported 112,323 new coronavirus cases on Wednesday, a fresh single-day record as the health minister said the peak had not been reached and compulsory vaccination should be introduced by May. Germany's tally of COVID-19 infections now stands at 8,186,850, the Robert Koch Institute for infectious disease said. The death toll also rose by 239 on Wednesday to reach 116,081.