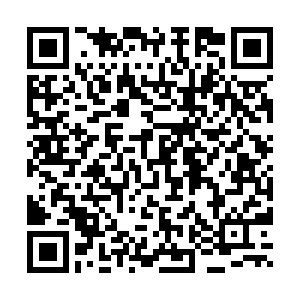 UK Prime Minister Boris Johnson has set out his government's plan for tackling COVID-19 over the winter months. It comes a day after medical leaders recommended vaccines for 12- to 15-year-olds and ahead of a roll-out of booster jabs for older people.

The leaves on London's trees are indicating signs of a change in season. And it isn't just the typical British drizzle dampening spirits as the UK heads into the fall.

With around 34,000 new COVID-19 infections a day, and 1,000 deaths in the past month, the British government's message is clear as it sets out its plans for what is anticipated to be a tough winter for the health service.

"COVID is still out there, the disease sadly still remains a risk," Johnson told reporters at a press conference, speaking just hours after it was confirmed that his 79-year-old mother Charlotte had died on Monday.

"I'm confident that we can keep going with our plan to turn jabs, jabs, jabs, into jobs, jobs, jobs and protect the gains that we've made together," he said.

Key points of the plan

- PCR tests for holidaymakers will be scrapped

Announcing the blueprint in front of lawmakers in parliament, Health Secretary Sajid Javid said: "The plan before the house today is our Plan A, a comprehensive plan to steer this country through the autumn and winter. But we've seen how quickly this virus can adapt and change."

With children now back in classrooms for the new school year, and the delights of summer's al-fresco dining already fading, variants of the virus – Delta or otherwise – will continue spreading.

But with new data showing the vaccines' solid success at preventing death and severe illness – they are at the center of Westminster's plan to roll back emergency restrictions and avoid further lockdowns. 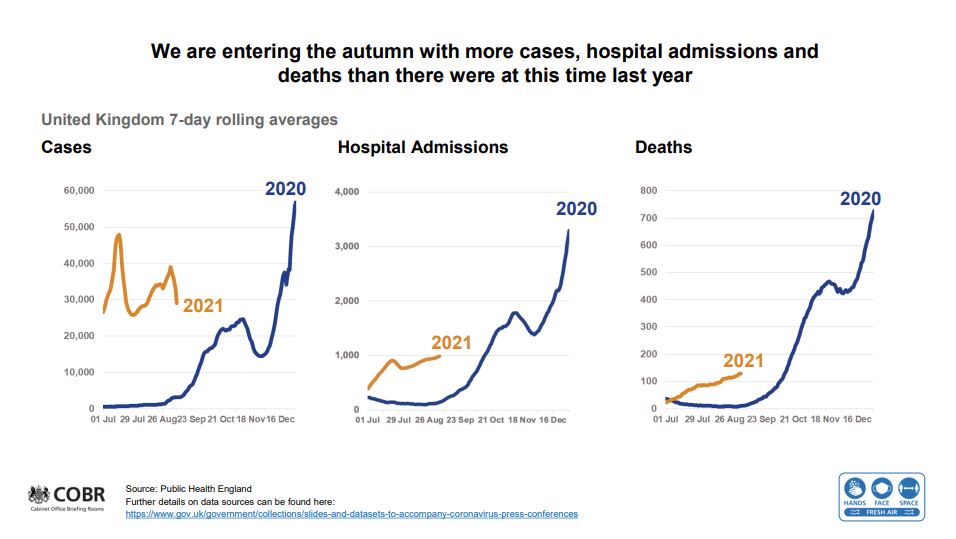 The UK government released statistics that show cases, hospital admissions and deaths are higher than this time last year but believe the vaccine program can prevent them from reaching the peaks of 2020. /Public Health England

The UK government released statistics that show cases, hospital admissions and deaths are higher than this time last year but believe the vaccine program can prevent them from reaching the peaks of 2020. /Public Health England

Within days, people aged over 50 will be offered a third shot if six months have passed since their second. And 12- to 15-year-olds are to be offered a single Pfizer jab – to minimize disruption to education, more than due to concerns for their health.

"Almost 99 percent of COVID-19 deaths in the first half of this year were people who had not received both doses of a COVID-19 vaccine," said Javid. "This shows the importance of our vaccination program, and by extending this program further, we can protect even more people," he added.

Ministers have already shelved plans for so-called vaccine passports in England to enter venues – but are keeping it in reserve if matters move in a disturbing direction. The return of masks mandates and work-from-home directives are also in their back pockets.

"If all those control measures are being put in place maybe we will have a little more control over the pandemic itself, which will help the NHS to cope with other infectious disease," Lancaster University virologist Muhammad Munir told CGTN Europe.

"However, it is not guaranteed how much scale we will have as we have relatively little time. Vaccines alone cannot be a bat for reducing the impact of the pandemic … [the] best measure we can introduce is really the masks," he said.

As the nights draw in, COVID-19 will be harder to hide from. Leaders are banking on science – and continued public support – to mitigate this still very dangerous disease.