Pseudo investigations into human rights allegations against China are "political manipulations aimed at discrediting" the country, its ambassador to the UK told journalists at an online event.

The briefing took place ahead of the second session of the so-called Uyghur Tribunal, due to start tomorrow in London.

"The China-UK relationship is at a critical juncture. We need to tap the potential for mutually beneficial co-operation between our two countries," he noted. He said the witnesses presented to the Tribunal were actors.

Government policies in Xinjiang have "nothing to do with human rights, ethnic groups or religion but everything to do with fighting extremism, terrorism and separatism," he said. 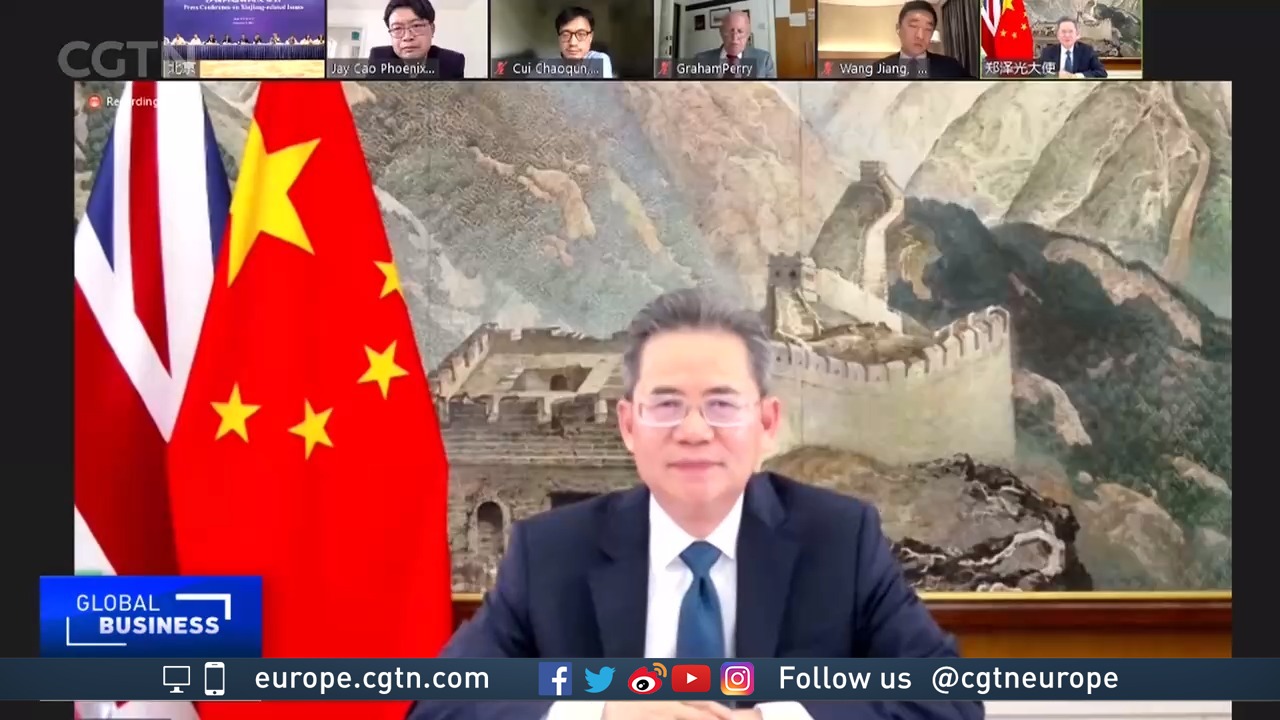 The Uyghur Tribunal describes itself as an independent group set up to investigate evidence of human rights abuses. It says it was launched at the request of the World Uyghur Congress – a body that includes no China-based individuals on its 30-strong leadership committee and has accused China of committing genocide in the Xinjiang region, a suggestion strongly rebutted by Beijing.

Thursday's press briefing heard from arbitrator Graham Perry that there is no evidence of genocide in the region, despite the global spotlight having been focused there for a number of years.

The U.S. government and parliaments in some European countries have used the label to describe China's actions.

Asked by CGTN Europe's Paul Barber why China's message was failing to convince policymakers in the UK, Xu Guixiang, spokesman for the information office of Xinjiang, said opponents of China had closed their ears.

"They look at everything in Xinjiang with tinted glasses and have a hidden agenda in their minds," he said.

Ambassador Zheng also warned the British government, which has imposed sanctions on Chinese organizations and individuals, not to consider further measures.

"Any actions of that nature will certainly come back to haunt them and hurt the national interests of the UK," he said.

Among the dozens of claims the briefing addressed were suggestions that:

· Deradicalization centers are concentration camps: The briefing heard that the centers are similar to programs used in the U.S., the UK and France and are more like boarding schools where attendees learn skills and can arrange leave to see families.

· Government policies repress the rights of Uyghur minorities: Ambassador Zheng stated that the Uyghur population has been flourishing and enjoys improved economic and social opportunities. State policies in the region are aimed at improving lives and, in particular, eliminating the scourge of terrorism and extremism, he said.

· Mosques had been destroyed while new "detention centers" are being constructed: Abdureqip Tumulniyaz, president of the Xinjiang Islamic Association, told the briefing the mosques in question were dilapidated or unsuited to their function and had been rebuilt or renovated. Xu, from the information office of Xinjiang, said buildings claimed to be new "detention" centers were mainly hospitals, commercial premises, schools or government buildings.

· Accusations of torture, sexual abuse, forced labor and restrictions on communications were also dismissed by the panel.