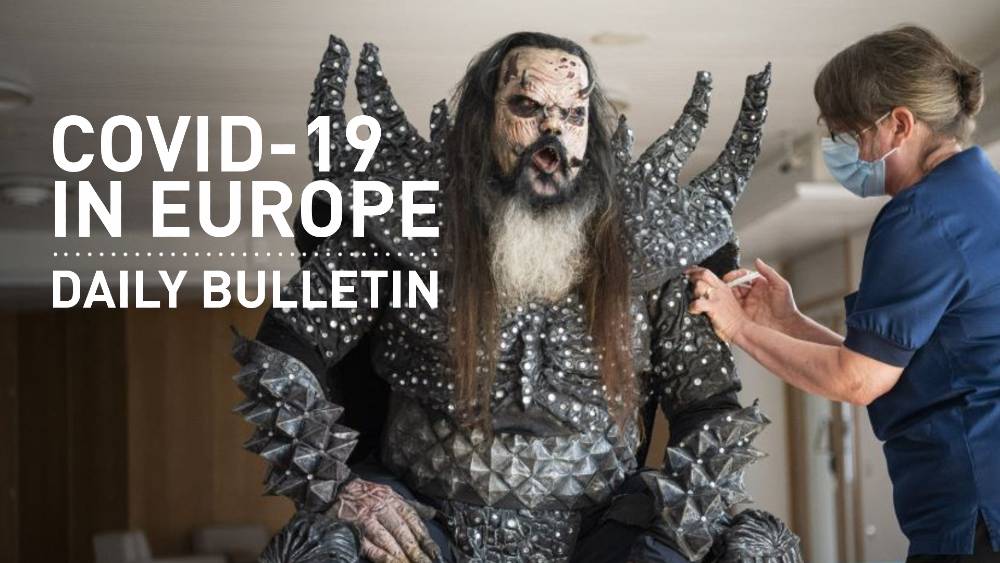 Rockstars get vaccinated is the message from Lordi, as a member of Finland's Eurovision-winning band gets jabbed. /Jouni Porsanger/Lehtikuva/AFP

Rockstars get vaccinated is the message from Lordi, as a member of Finland's Eurovision-winning band gets jabbed. /Jouni Porsanger/Lehtikuva/AFP

All 16 and 17-year-olds in the UK will soon be offered a vaccine, after the country's Joint Committee on Vaccine and Immunization updated its advice. At least 1.4 million teenagers will be offered a first dose, but the Committee said it would update its advice on a second jab. "We have the supply and I'm expecting this to start in a very short number of weeks," spokesperson Jonathan Van-Tam said in a press conference.

Fully vaccinated people have around 60 percent protection from the Delta variant, according to a study on the prevalence of COVID-19 strains by Public Health England. The body said the spread of Delta has been aided by unvaccinated young people – including many with asymptomatic infections.

European Commission President Ursula von der Leyen pressed the U.S. to mirror the EU's loosening of travel restrictions and let Europeans in. "We must solve this problem as soon as possible and we are in contact with our American friends," she told German broadcaster RND. "It must not drag on for weeks," she added.

So called Long COVID is very rare in children, according to a study published in the UK. Researchers from King's College London found only 1.8 percent of children had symptoms lasting 56 days or more.

China is extending its vaccination drive to children aged 12 and older, as it seeks to stop the spread of the Delta variant across the country. It reported 71 new cases today, which is the highest since the start of the year. School authorities are at the forefront as students are seen as key to the vaccine program.

Israel is reintroducing some pandemic restrictions as cases rise again. Prime Minister Naftali Bennett said vaccinations and renewed restrictions are the key to avoiding a new lockdown. "Our goal is to keep Israel open but not reach a situation where hospitals will say we're full," he said. "To refrain from harsher restrictions, we'll get vaccinated, wear masks and maintain distancing," he added.

All 12 members of Greece's artistic swimming team are isolating after five tested positive, Olympic officials said. The whole team has withdrawn from the competition. None of those who tested positive so far require hospital care, a spokesperson said.

Ukraine has taken delivery of 500,000 doses of vaccine from Denmark, according to President Volodymyr Zelenskiy. "We're grateful to our Denmark friends for their support in overcoming this global challenge," he said. Ukraine has vaccinated 2.1 million people out of a 41 million population.

Russian Olympic Committee karate Olympian Anna Chernysheva has tested positive and is out of the Games, according to Russia's Karate Federation. "Her COVID-19 test, compulsory for all participants at the Games, was positive," it posted on Facebook. Chernysheva is reportedly asymptomatic.

A study by researchers in Rome has linked COVID-19 to increased problems with erectile dysfunction. It discovered Italian male sexually active subjects who were infected with the virus were three times as likely to experience erectile problems compared with counterparts who had not tested positive.

Germany's Federal Ministry of Health has sent the first draft of the fall and winter "coronavirus strategy" to the nation's 16 state governments for review. The policy will attempt to get ahead of any potential surge in cases through a comprehensive framework that is agreed to ahead of time by federal and regional leaders. During Germany's second and third waves, policy talks were filled with disagreement as some state leaders were less keen to introduce strict rules.

A version of the strategy seen by Bild indicated "such a drastic lockdown as in the second and third waves will, in all probability, not be necessary." However, other measures will likely be reintroduced. It is expected that mask mandates will remain part of life until at least mid-2022.

The UK has registered a fall in both hospitalizations and deaths, two weeks after "unlocking" and removing all pandemic restrictions, although many businesses have taken the choice to require face masks in shops and public transport.

It's thought the vaccine drive is responsible for the drops – because the number of new infections is actually higher than previous peaks. Medical leaders have put the rise in cases down to young people who haven't been vaccinated, but who also suffer relatively minor symptoms in general.

Meanwhile, the country's former home secretary has offered her caravan in Wales to a trio of hikers, one of whom was notified of a positive test, meaning they had to cancel their campsite booking. Jacqui Smith offered the use of her holiday home when the hikers' social media plea was brought to her attention.

Belgium has now recorded more than 25,250 COVID-19 deaths and concerns are mounting that number could climb in the weeks to come. Hospital admissions have climbed 54 percent in the past two weeks, fueled by the spread of the highly infectious Delta variant. Close to 40 people are now entering hospital daily after new cases spiked four-fold since June.

Most of the new infections are in people aged 30 and younger, who have not yet been vaccinated. The good news is that the country's vaccination rate is steadily climbing higher, with nearly 75 percent of the adult population now fully immunized.

Testing shows the Delta variant is making up 85 percent of COVID-19 samples in Slovakia and 90 percent of samples in Czechia. Czech authorities have also reported detecting two Delta Plus cases from 189 samples sequenced last month.

Meanwhile, Poland's Deputy Health Minister Waldemar Kraska says the country's hospital infrastructure is ready for a possible fourth wave. Speaking to local media, Kraska confirmed there are currently 6,000 beds available to take on COVID-19 patients, with medical infrastructure significantly developed after the third wave. A temporary COVID-19 hospital is currently operating in each province but he warned other hospitals should also be getting ready to admit coronavirus patients.

The so-called "White Plan" has been launched once again in some parts of the country. Corsica and the Marseille-Nice region have reimposed the emergency hospital plan, which allows doctors to create capacity for more COVID-19 patients by delaying non-urgent operations and freeing up capacity in other wards.

The fourth coronavirus lockdown since the start of the crisis begins today on the French Caribbean island Guadeloupe. The situation on the island is described as "catastrophic". Local health officials say there has been a "very strong" deterioration in the health situation on the island. The neighboring French Caribbean territory of Martinique has already re-entered lockdown.