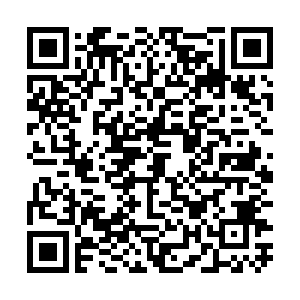 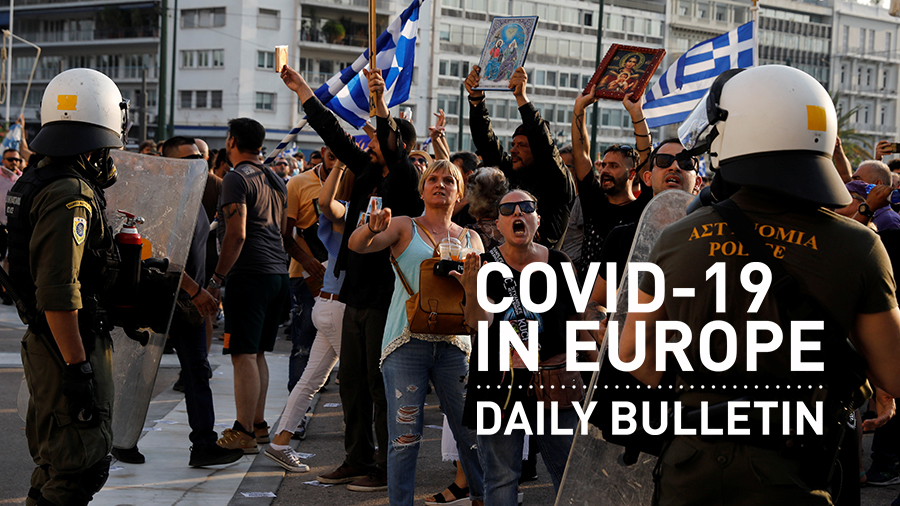 Protesters shout slogans during a protest against COVID-19 vaccinations outside the parliament building in Athens, Greece, on July 21. /Costas Baltas/Reuters

Protesters shout slogans during a protest against COVID-19 vaccinations outside the parliament building in Athens, Greece, on July 21. /Costas Baltas/Reuters

• More than 200 million Europeans have been vaccinated, said the EU on Thursday. That's more than half of the EU's population, but less than the bloc's target of 70 percent for the summer.

• UK food stores fear closures and food shortages as an increasing number of staff members in supermarkets, lorry drivers and other essential workers in the industry are asked to self-isolate. UK Business Secretary Kwasi Kwarteng told Sky News that the government was preparing to announce a new list of workers exempt from the need to self-isolate.

• Hospital admissions for COVID-19 patients in the UK have reached their highest level since February, with 752 admissions reported on July 19.

• Italy's government is expected to extend its "Green Pass" today, which will require people to show proof of having received at least one dose of a COVID-19 vaccine before entering indoor venues, including restaurants, and will only allow fully vaccinated onto planes and into places which gather large crowds.

• German Chancellor Angela Merkel said she was worried about rising case numbers. "The infection figures are rising again and with a clear and worrying dynamic. We are seeing exponential growth," she said, adding that "every vaccination... is a small step towards a return to normality."

• Protesters clashed with police in Athens, Greece, on Wednesday, when around 1,500 people took to the streets outside parliament to protest against mandatory vaccination of healthcare workers and nursing home staff.

• Demonstrations against the government's new COVID-19 legislation took place on Wednesday evening in Paris, Toulouse, and a number of other French cities. The health secretary told lawmakers "the longer we wait to respond, the longer we go on, the worse the rebound of the epidemic will be and the more that we will risk the lives of other French citizens."

• Two doses of Pfizer have proven to have 88 percent efficacy against the Delta variant, while two doses of AstraZeneca were 67 percent effective at preventing symptomatic illness, according to a study published in The New England Journal of Medicine on Wednesday. The Delta variant is now the dominant COVID-19 strain in the world.

• Pfizer and BioNTech have struck a deal with South Africa-based Biovac company to produce their COVID-19 vaccine locally, starting in 2022. The Cape Town-based company will complete the final stage in the manufacturing of the jab. The doses produced will be distributed exclusively in the African Union.

• China has reacted to plans by the World Health Organization for the second phase of its research into the origins of COVID-19, which would include investigating the hypothesis that the virus escaped from a Chinese laboratory. China's national health commission Zeng Yixin said Beijing could not accept a plan which "disregards common sense and defies science." 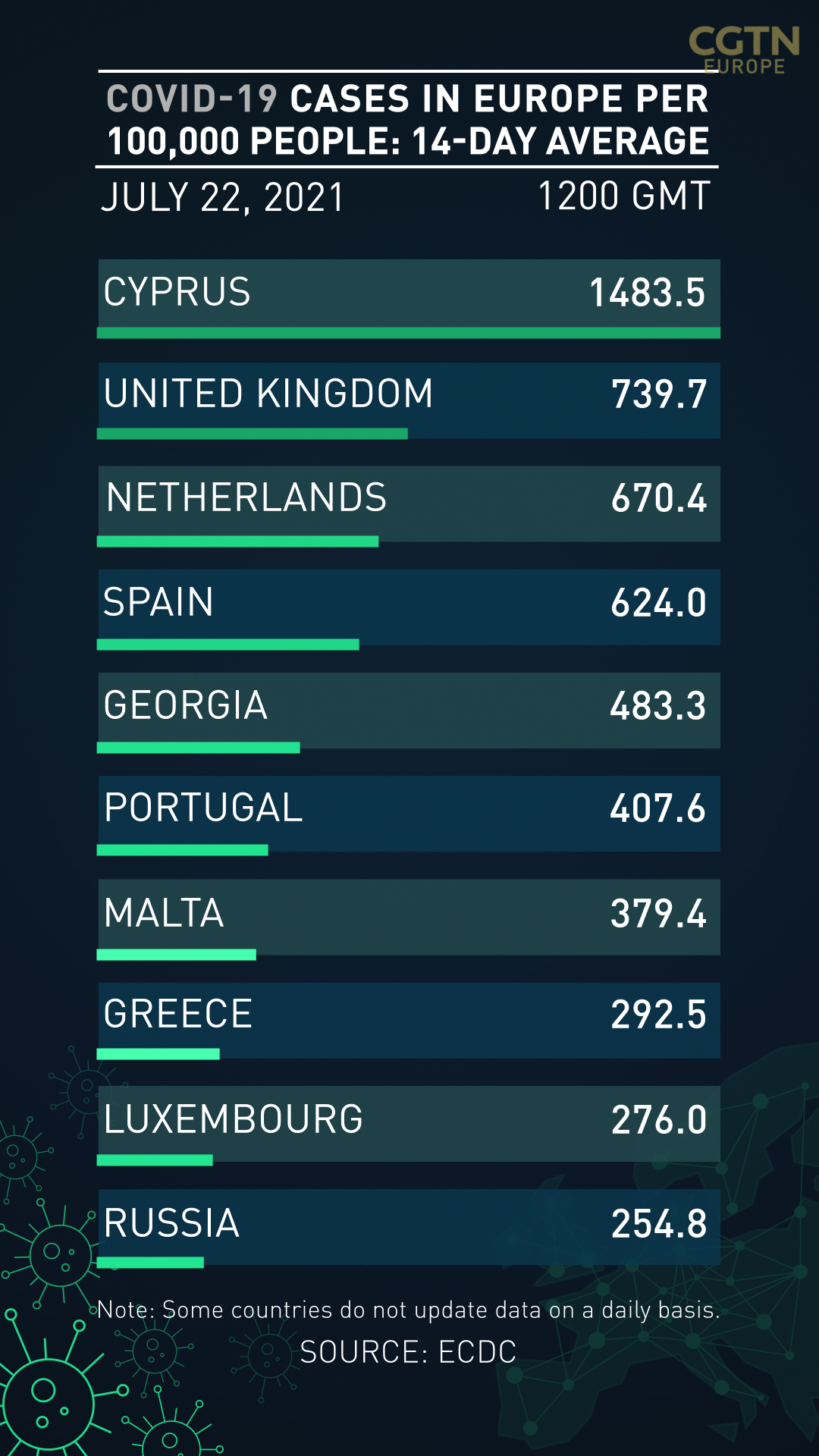 Businesses in the UK are calling for clarity over new rules around self-isolating when staff have been in contact with someone who has tested positive with COVID-19.

On Monday, Prime Minister Boris Johnson said they wouldn't need to quarantine, but has since apologized for growing confusion.

There was set to be a list of critical workers who'd be exempt from any rules but that has now been shelved, with the government saying they will be considered on a "case-by-case basis" instead.

The issue could worsen a staff shortage, especially in the UK's hospitality and supermarket industries.

Elsewhere, nurses in England may go on strike over the government's decision to award them a 3 percent pay rise for their efforts fighting the pandemic. Many were pushing for a rise of 15 percent.

Slovakia has confirmed 72 new cases of the COVID-19 Delta variant, reporting 63 percent of them were found after people entered the country from overseas. Slovakia has recorded a total of 107 Delta variant cases since June.

A Health Ministry spokesperson has warned of a worsening situation and the relatively high increase in daily cases in several European countries, including holiday destinations, saying "the risk of importing the virus is quite high."

The government is not making any changes to self-isolation rules for those who are unvaccinated when crossing the border, although this will be discussed again on August 9.

Currently those who have not been vaccinated must isolate for 14 days but can be released if testing negative on the fifth day. There are special rules for border commuters involving a negative PRC test from the last seven days to cross the border without isolation, but the restrictions are expected to be tightened in September.

Slovakia is the one of the least vaccinated countries in Europe. The only states with a lower percentage of vaccinated people include Ukraine, Russia, Romania, Montenegro and Croatia.

The latest data from the Robert Koch Institute shows there have been 1,890 new COVID-19 cases recorded in Germany. That's roughly 15 percent more than this time last week – giving some hope that perhaps the upward trendlines are weakening.

There have also been 42 deaths recorded in the past 24 hours, which equates to a 31 percent increase compared to the same day last week.

That increase underscores the importance of Germany's vaccination campaign, which has so far fully protected 47.3 percent of the population, while 60.2 percent have received at least one dose.

Chancellor Angela Merkel is holding her annual summer press conference on Thursday, in which she is expected to be asked about the country's preparations for any further waves of infections, particularly over the autumn and winter. 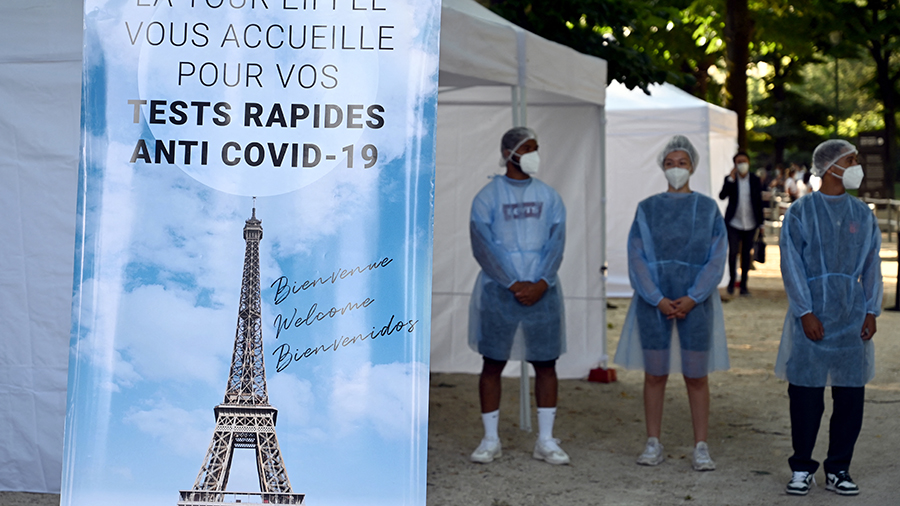 Health workers stand near a COVID-19 antigenic tests area in Paris, as a banner reads 'The Eiffel Tower welcomes you for your anti COVID-19 quick tests.' /Bertrand Guay/AFP

Health workers stand near a COVID-19 antigenic tests area in Paris, as a banner reads 'The Eiffel Tower welcomes you for your anti COVID-19 quick tests.' /Bertrand Guay/AFP

Demonstrations against the government's new COVID-19 legislation took place on Wednesday evening in Paris, Toulouse, and a number of other French cities.

The protest in the French capital was outside the National Assembly, where MPs continue to debate the health pass and obligatory vaccination for healthcare workers.

Nearly 1,000 amendments have been lodged by the opposition. On Wednesday evening the health secretary told MPs "the longer we wait to respond, the longer we go on, the worse the rebound of the epidemic will be and the more that we will risk the lives of other French citizens."

An increasing number of regions in France are bringing back local restrictions, such as curfew or obligation to wear face masks outside in public again. Five million vaccination appointments have been booked in the last 10 days.

CGTN Europe: '96% of new COVID-19 cases in France are among unvaccinated people'