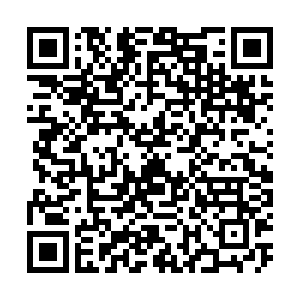 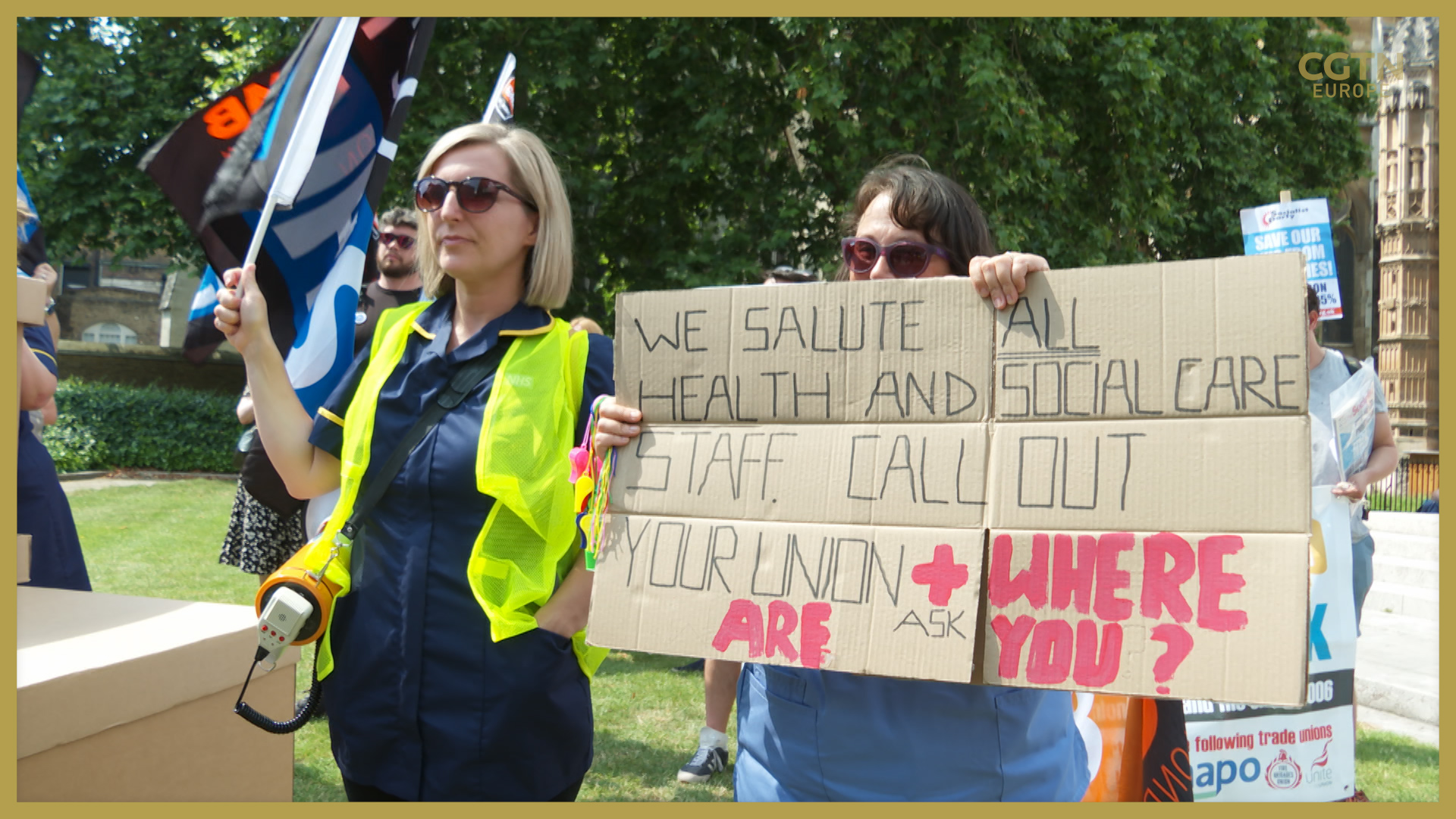 Healthcare workers have rallied in central London to call for a 15 percent pay rise. The protesters walked through Westminster to Downing Street – the prime minister's official residence – to deliver a petition signed by more than 800,000 people backing the campaign.

In March, the UK government proposed a 1 percent pay rise for nurses to the National Health Service Pay Review Body (PRB), saying it was all the country could afford. At the time, Prime Minister Boris Johnson defended the proposals in light of the historic economic downturn caused by COVID-19.

"What we have done is try to give them as much as we can. Don't forget that there has been a public sector pay freeze, we're in pretty tough times," he said.

Since then, the PRB has looked at the government's plans. Following its assessment, on Tuesday, officials were expected to announce a 3 percent rise would be offered instead. But the Royal College of Nursing (RCN), which represents the nursing sector, said staff "deserved" a minimum increase of 12.5% and called the original offer "insulting."

"Funding our health and care system is a political choice. After years of inadequate support for the largest health and care workforce in the UK, the government should make the right choice now," it said in a message on its website. 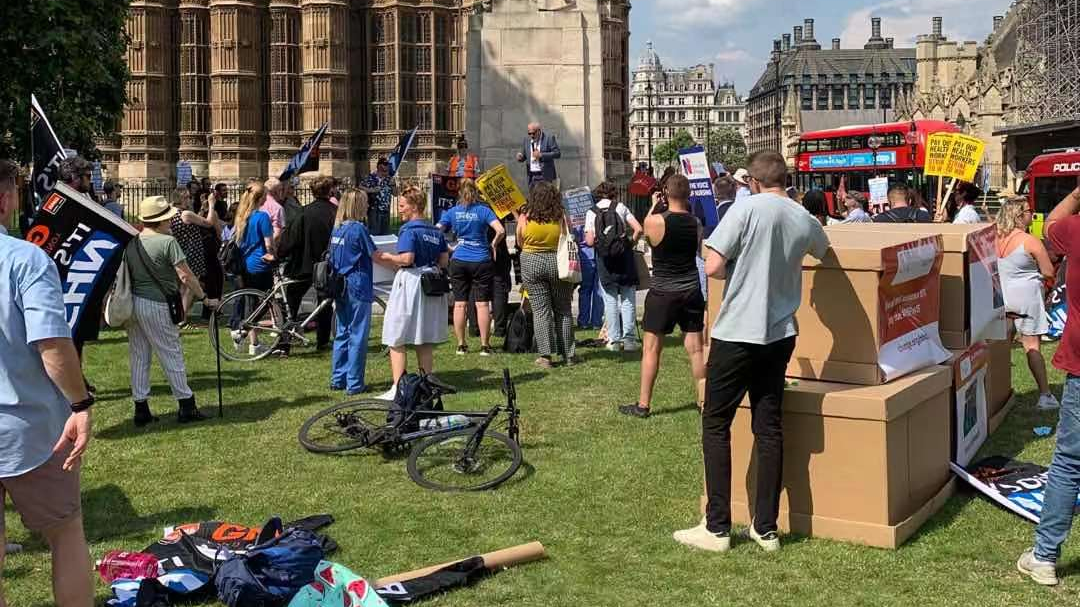 The UK government offered a 1% pay rise for nurses, saying that it is all that could be afforded. /Nawied Jabarkhyl/CGTN Europe

The UK government offered a 1% pay rise for nurses, saying that it is all that could be afforded. /Nawied Jabarkhyl/CGTN Europe

The GMB union, members of which include healthcare workers, said: "Anything other than 15 percent is insulting to those who've risked their lives to protect us." Possible strike action could be on the way.

The RCN has set aside more than $47 million to fund any action. That would cover costs such as loss of earnings and campaigning.

According to official figures, there are more than 123,000 doctors and 301,000 nurses working in the National Health Service (NHS) in England.

The British Medical Association, which is the trade body for doctors and consultants, has also asked its members about whether they want to stop working overtime in protest at the move.

The threat of strike action could be problematic for officials, especially as coronavirus cases rise sharply in the UK. 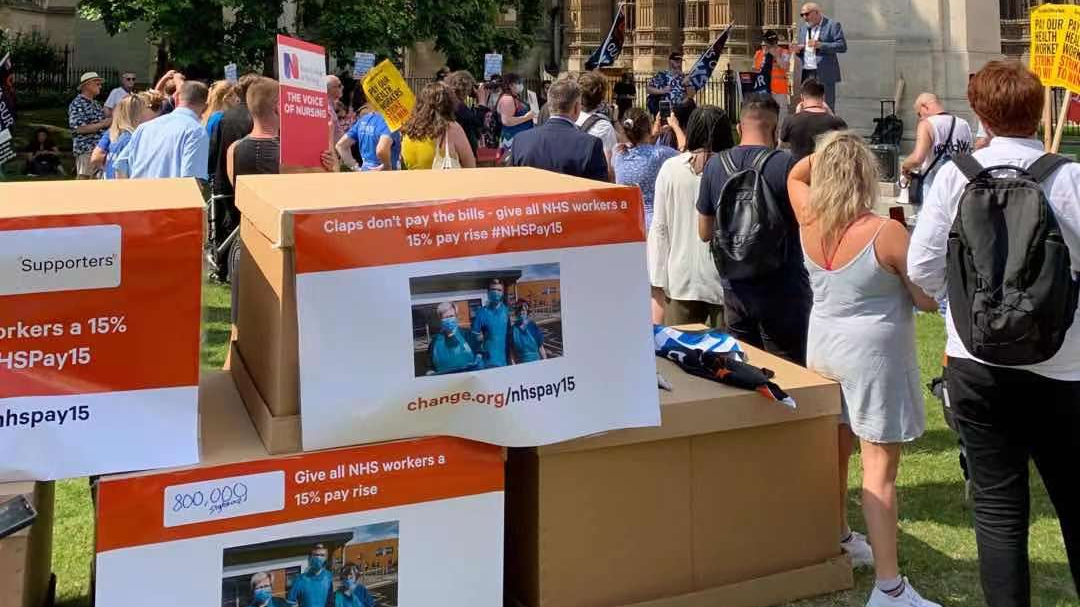 There are threats of potential strikes among health care workers. /Nawied Jabarkhyl/CGTN Europe

There are threats of potential strikes among health care workers. /Nawied Jabarkhyl/CGTN Europe

The success of the vaccination program has significantly reduced hospitalizations and deaths from COVID-19 but the government's own figures show infections could rise to 100,000 daily this summer with up to 2,000 patients in hospital requiring care each day.

There is also the risk of political push-back. The pandemic has led to public support for healthcare workers, perhaps best signified by the "Clap for Carers" campaign.

Mainly during the UK's first national lockdown last year, hundreds of thousands of people took part in a weekly round of applause for those on the front line fighting the pandemic.