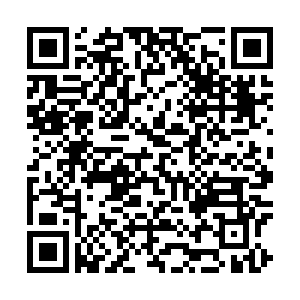 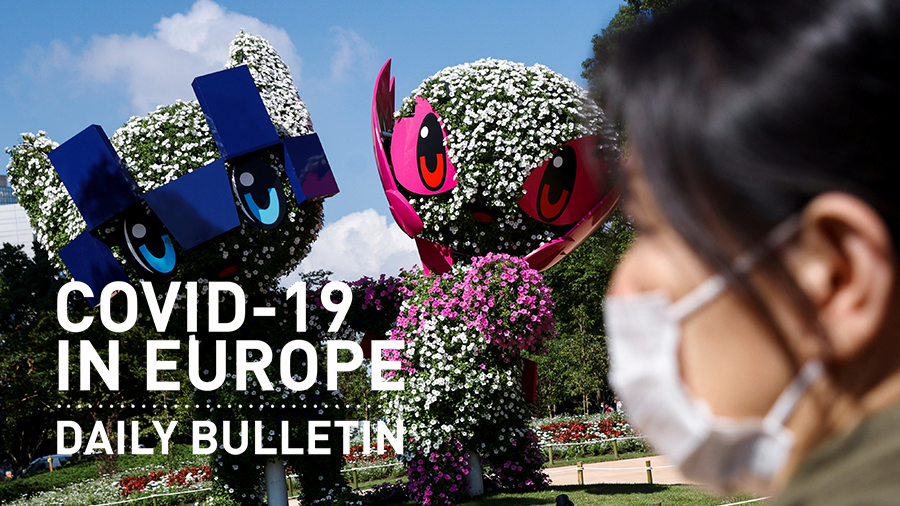 • France reported 18,000 cases in the past 24 hours on Wednesday, a surge of 150 percent in new cases compared with the previous week as the Delta variant spreads through the country.

• Starting Wednesday, people wanting to go to cinemas, museums, sport events and other cultural venues in France will have to show their health pass - proof of vaccination or a negative COVID-19 test.

• Mandatory outdoor mask-wearing in France has been reintroduced in Toulouse and nearby towns, as well as in the southern Pyrenees-Orientales department at the border with Spain.

• A group of UK airlines and airports, including Ryanair, easyJet and Virgin Atlantic, lost a court bid to force the British government to be more transparent about its COVID-19 international travel rules. The complaint filed in June was rejected by the High Court in London, which ruled that forcing the government to explain its choices "would impose an unreasonable burden" and "risk slowing the decision-making process."

• The European Medicines Agency (EMA) has started reviewing the vaccines made by French company Sanofi. The two-doses jab can be stored at room temperature and preliminary trials have proved it could be effective in protecting against the virus. The EMA is currently reviewing four other vaccines for authorization, including Russia's Sputnik V and China's Sinovac.

• UK Prime Minister Boris Johnson has stressed the importance of self-isolating for those who are alerted by the National Health Service's app, which notifies those who have been in contact with people who tested positive for COVID-19. The app's instructions are not legally enforceable.

• The UK reported its highest death toll in 24 hours in almost four months, with 96 COVID-19 deaths on Tuesday.

• Russia has produced its first test batch of Sputnik V in Vietnam, in cooperation with the Vietnamese pharmaceutical company Vabiotech, as announced by the Russian Direct Investment Fund. Producing the vaccine locally in Vietnam should facilitate vaccination efforts in the country, which is struggling with a new surge of infections.

• The first athletes to withdraw from the Tokyo Olympics because of COVID-19 are Chilean taekwondo competitor Fernanda Aguirre and Dutch skateboarder Candy Jacobs, who, after testing positive for the virus, are now isolating for 10 days according to Japanese rules. Jacobs said she was "heartbroken."

• A heated exchange between Republican Senator Rand Paul and senior scientist Anthony Fauci took place on Capitol Hill on Tuesday, with Paul accusing Fauci of "obfuscating the truth" about the U.S. government's role in funding research in Wuhan's specialized laboratory. "Senator Paul, you do not know what you are talking about, quite frankly," replied Fauci. "If anybody is lying here, Senator, it is you," he added.

The latest data from Germany's Robert Koch Institute show there have been 2,203 new cases – a 42 percent rise compared with the same day last week.

It's also the first time since June 11 that more than 2,000 cases have been recorded – revealing the falling case trendlines have now well and truly reversed and the Delta variant continues to spread.

Importantly, though, a major milestone was passed in the past 24 hours – with exactly 60 percent of the German population now given at least one dose of vaccine and 46.7 percent fully protected.

Authorities are hoping to keep up the pace of the vaccination campaign to prevent a major wave of new cases.

Poland is only weeks away from a fourth wave of COVID-19, according to the country's deputy health minister, who has warned unvaccinated Poles to use that time to get a jab.

Waldemar Kraska told local media the next wave "is very close." He noted there is currently no other method to prevent a rise in infections other than people being vaccinated.

Poland has confirmed 94 new infections caused by the Delta variant, which is now making up 54 percent of positive samples.

Kraska also noted the Delta is most often being detected in those under the age of 35. Poland has a population of 38 million people, so 16.3 million people have been fully vaccinated. 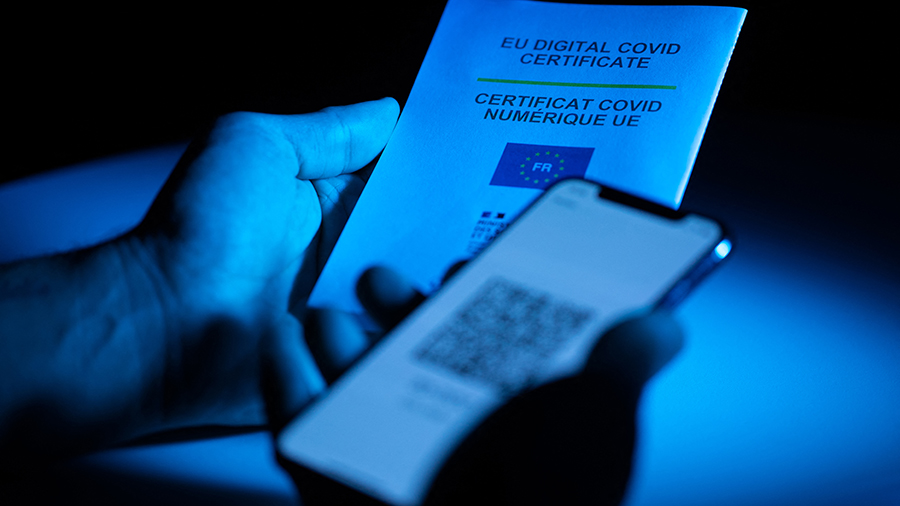 The French government announced on July 12 that the COVID-19 health passport would be mandatory to access most public places. /Joel Saget/AFP

The French government announced on July 12 that the COVID-19 health passport would be mandatory to access most public places. /Joel Saget/AFP

France's Prime Minister Jean Castex will speak at 1 p.m. local time after the meeting of senior ministers in the latest health defense council.

He will give an update on the government's COVID-19 strategy after controversy over the health pass and the explosion of new infections.

Castex said: "We have never seen a flare-up like this." New cases rose 158 percent in 24 hours.

Starting today, the health pass is now required in cultural and sporting venues that can hold more than 50 people. Theaters, museums and swimming pools have to check all visitors to ensure they have either been vaccinated or have recently tested negative. Bars and restaurants will impose the health pass requirement from the start of August.

The UK's public sector net debt has hit more than $3 trillion. That's almost 100 percent of its economic output – or gross domestic product – and the highest ratio since 1961.

The figures from the Office for National Statistics show the continued economic cost of the pandemic to the country. In June, public sector borrowing reached just over $31 billion.

While that was still historically high, it was around 20 percent lower than in June last year, signaling an uptick in the UK economy as COVID-19 rules have eased in recent months.

And the UK's vaccine roll-out is slowing. According to The Times, unused jabs are being sent back by doctors as the average number of vaccinations is about 55,000 a day – almost a quarter of the figure just over three weeks ago.

CGTN America: The Americas account for a quarter of global COVID-19 cases, 40% of deaths: WHO

CGTN Africa: Africans deserve to grow with the rest of the world