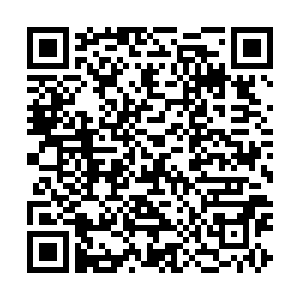 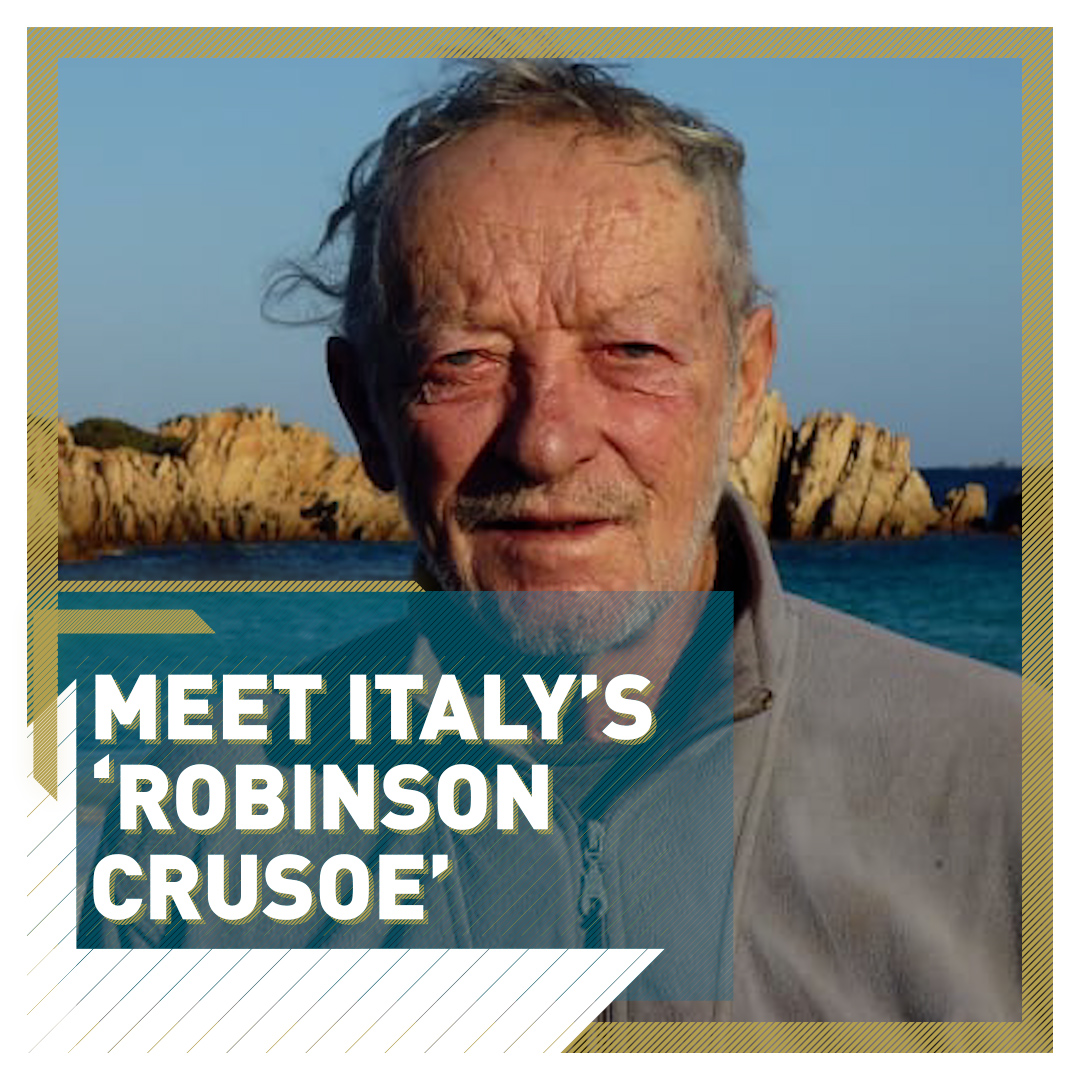 The man who has become known as 'Italy's Robinson Crusoe' after spending 32 years on a secluded Mediterranean island is now departing his hermit's hut after pressure from authorities to leave.

If the wind is in your favor, the first thing to welcome you when you arrive at Budelli Island on a boat is the intense smell of the helichrysums, the yellow flowers of which adorn the white rocks and sandy beaches of this tiny island off the northern coast of Sardinia.

This is how Mauro Morandi remembers first arriving in Budelli in 1989, when on his way to Polynesia with his partner and friends, he almost fortuitously reached the island and spontaneously decided to cancel all other plans and stay.

For thirty-two years, Morandi has been Budelli's only inhabitant, acting as its caretaker, protecting its uncontaminated landscape from accidental fires and the trespassing of tourists onto its pristine beaches.

Now, the 82-year-old hermit, who acquired international fame as "Italy's Robinson Crusoe," is being forced to leave his beloved island, as local authorities move to evict him. 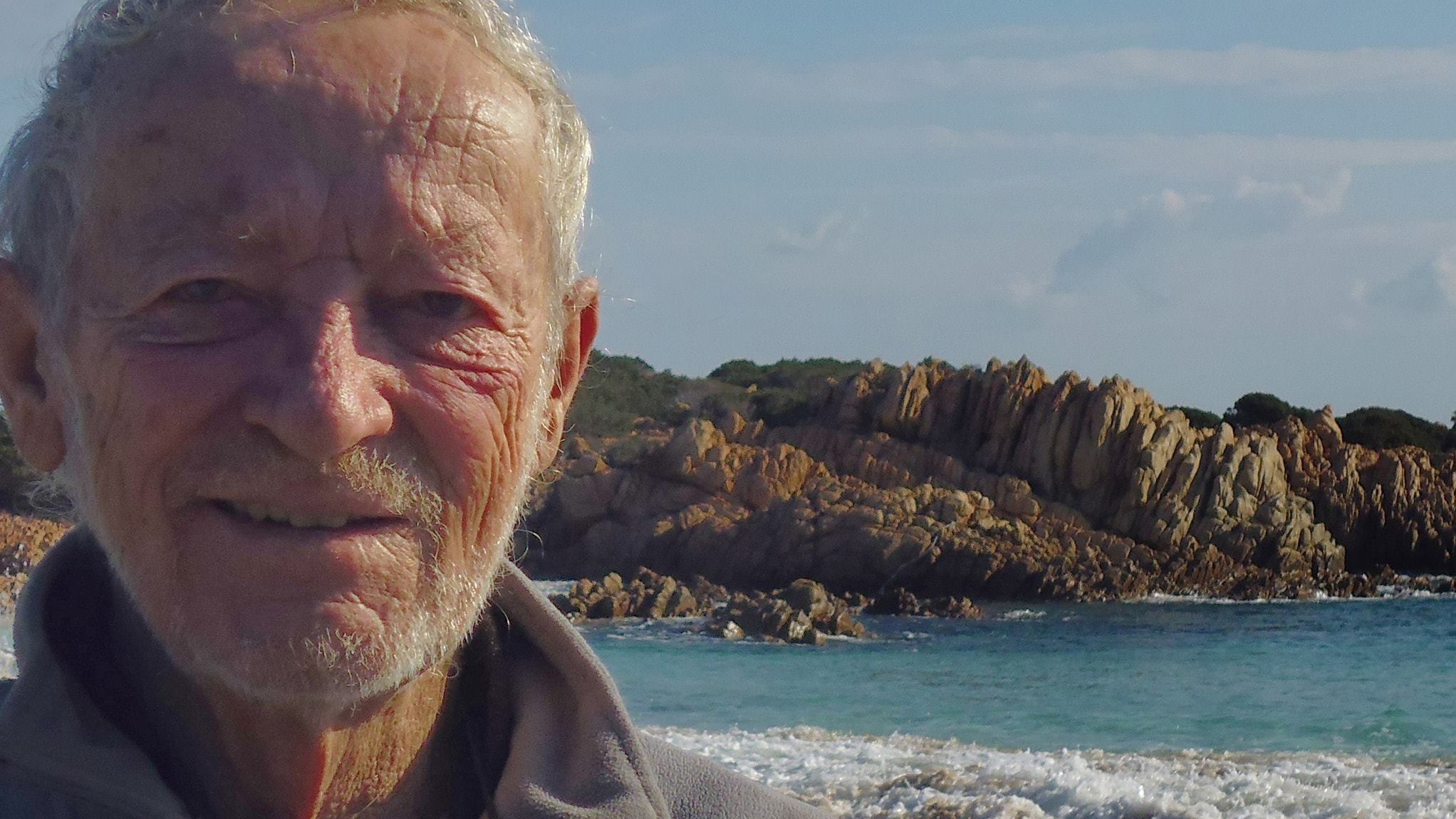 A lucky twist of fate

Before becoming Italy's most famous "castaway," Morandi was a PE teacher in Modena, in the heart of Emilia-Romagna. A city of red-stone rooftops and glorious squares rising on the flat plains surrounding the Po river, Modena couldn't be more different from the island Morandi made his home in the stretch of sea between Sardinia and Corsica.

Surrounded by crystal clear waters that could belong to a tropical paradise, Budelli is one of the main seven islands that constitute the archipelago of La Maddalena, just a few kilometers away from the world-famous Costa Smeralda.

Of all the islands in the archipelago, which are part of the local national park, Budelli is famous for its Spiaggia Rosa, with its stunning pink sand, made of fragments of shells and corals. 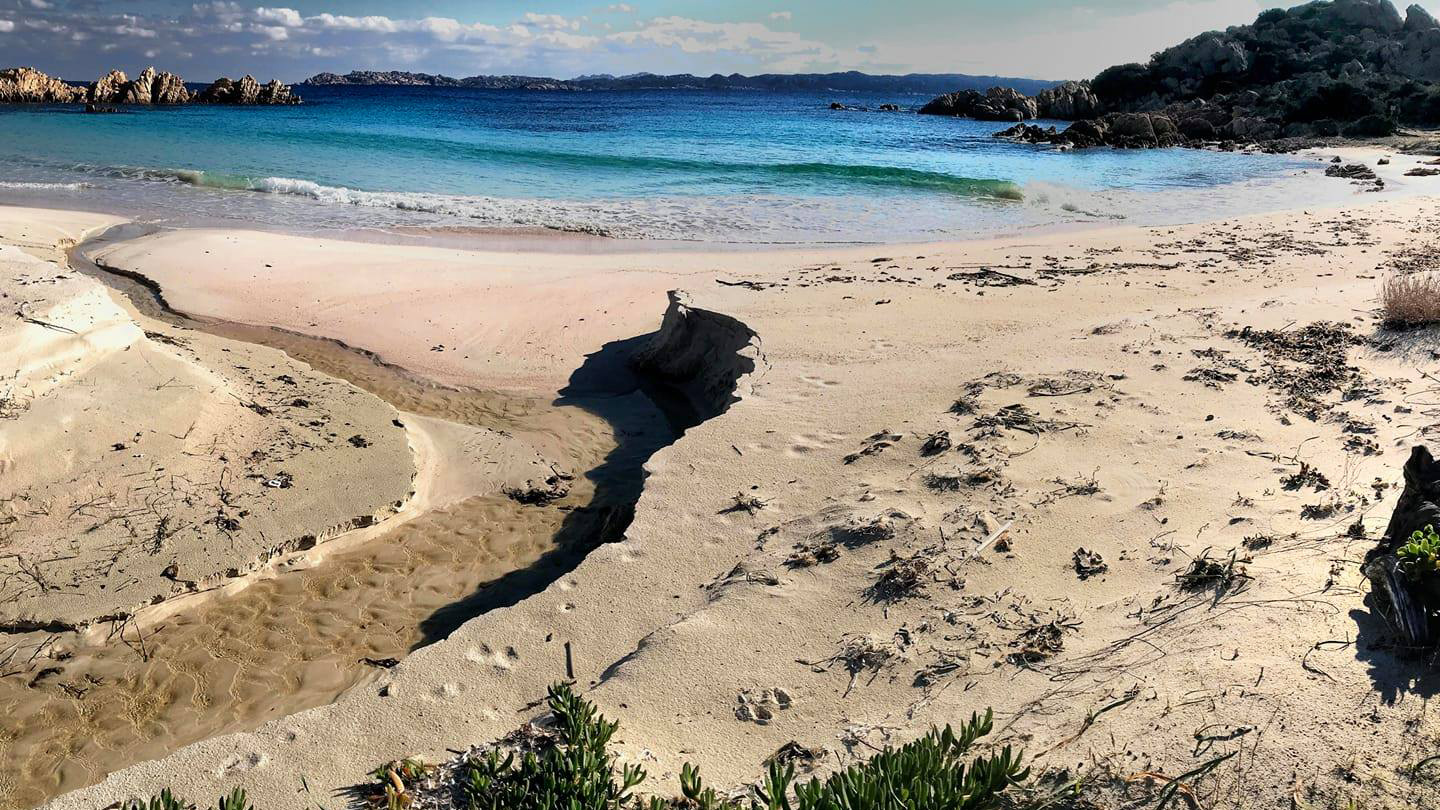 The pure beauty of the island of Budelli, off the coast of Sardinia. /Mauro Morandi via Facebook

The pure beauty of the island of Budelli, off the coast of Sardinia. /Mauro Morandi via Facebook

In 1989, Morandi was traveling on a catamaran heading towards Polynesia, determined to leave Italy behind. "I wanted to leave a consumerist society that doesn't love nature, only uses it," he recalls.

"I wanted to go to Polynesia, but I came to the Maddalena archipelago because many told me you could work well with tourists."

At the time, Morandi was in debt for the amount he borrowed from his bank to buy the boat he meant to leave civilization behind with. He thought he could repay it by working with the thousands of tourists who visited the northern coast of Sardinia.

Once arrived at the archipelago, Morandi thought of a curious encounter he had a couple of years earlier. In 1987, he had met in a bar in Fiumicino an Argentine man named Ernesto, who had just arrived in town after a solo trip across the Pacific Ocean. Talking about each other's life plans, Ernesto told Morandi that if he ever went to Sardinia, he should go visit his old friend – the caretaker of Budelli Island.

What happened after that once-in-a-lifetime chance many would call fate, but the Italian hermit thinks it's simply the result of a moment of deep connection with the energy of the universe. 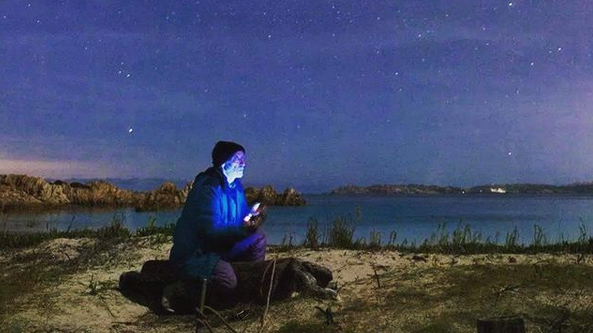 A shot Morandi took at night on the island, in a moment of deep connection with nature. /Mauro Morandi via Facebook

A shot Morandi took at night on the island, in a moment of deep connection with nature. /Mauro Morandi via Facebook

"[The caretaker] told me he would leave the island in two days," remembers Morandi, "and strangely enough we were there two days before he was bound to leave. So I took advantage of the situation and asked if I could stay in his place. We contacted the administration of the island and I became the new caretaker."

On the island Morandi found what he was looking for thousands of miles away: "silence and solitude" immersed in nature. He never left for Polynesia – but stayed on the island for the last 32 years, moving into an old World War II shelter, the only building on the island, where he's lived until today.

This World War II refuge is at the center of the diatribe between the national park and Morandi which is driving the island's guardian to finally leave his post.

I don't think of myself as a Robinson Crusoe, because Robinson Crusoe wanted to go back. I don't want to return to society. I'm much more like Ulysses, in search of himself.
-  Mauro Morandi

An island for everyone... and no one

After the company that owned Budelli went bankrupt, the future of the island was uncertain: initially auctioned and sold for 3m euros ($3.6m) to an entrepreneur from New Zealand in 2013, it was then given to the local La Maddalena National Park by a court ruling in 2016.

It was, after all, a great victory for everyone, especially local people. The island, which had been private for years, finally became public property. But Morandi's role became suddenly superfluous. 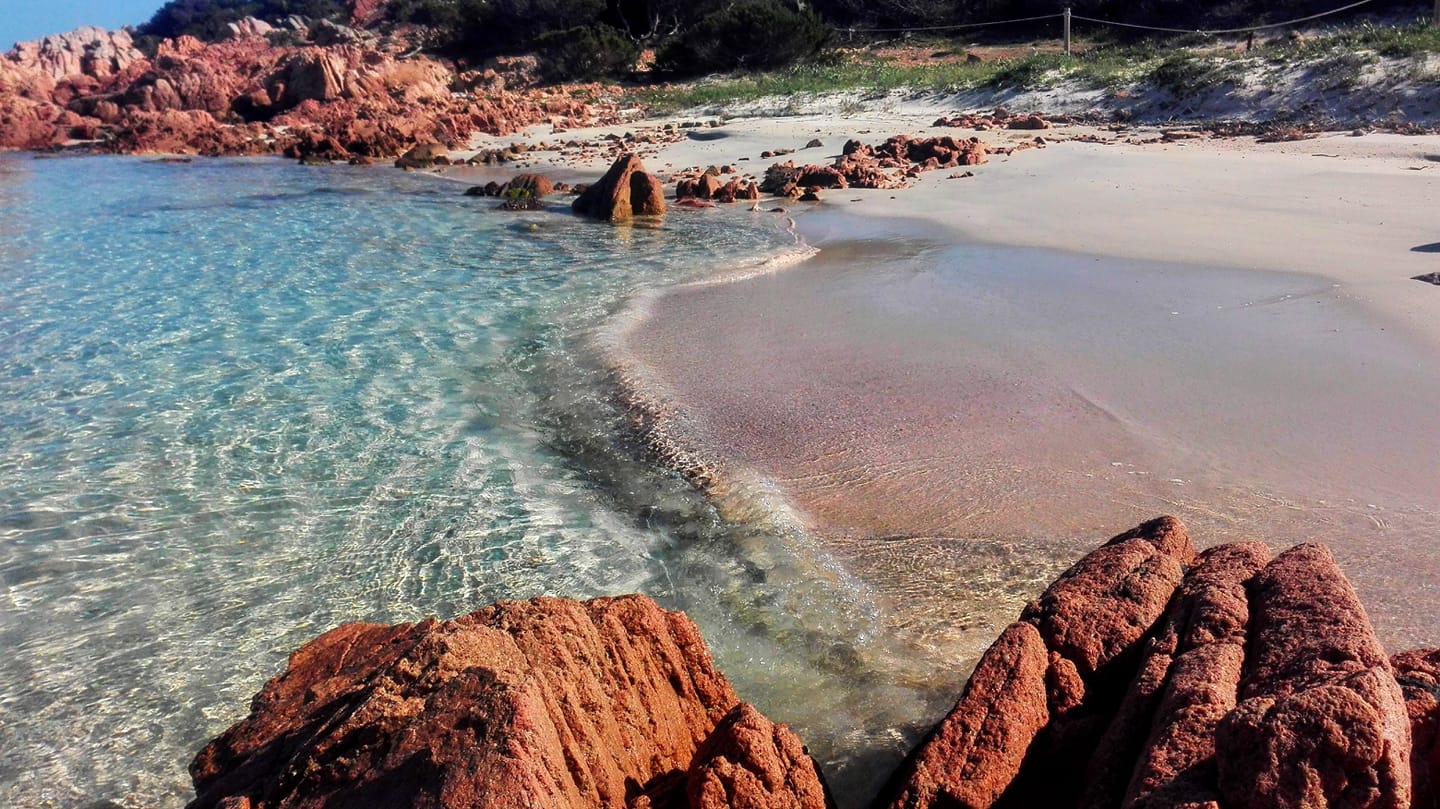 "At the moment the island became public, there was no need for a caretaker and the contract with Mauro Morandi, who had his own salary for this job, because it was a job, couldn't exist anymore," explains La Maddalena National Park president's Fabrizio Fonnesu.

"We deeply recognized the work he has done for the island. But he had a title – now he doesn't anymore. As much as we might need him, as much as it's important – as a national park, we don't have the power to say 'Yes, you can stay' clearly. We need to see in the future what other forms of collaborations we can have [with him]."

The park authorities are moving forward to restore the World War II shelter where Morandi lives, in order to remove dangerous materials and additions made illegally by the previous owner of the island. 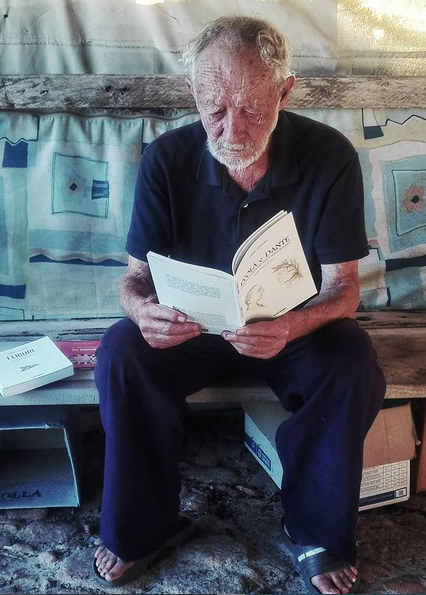 Morandi spends most of its time reading. He believes books 'help you understand who you are.' /Mauro Morandi via Facebook

Morandi spends most of its time reading. He believes books 'help you understand who you are.' /Mauro Morandi via Facebook

"They want to restore the shelter to its original state and there are going to be construction works, so for the safety of the workers and mine I have to leave," says Morandi.

"Now I'm trying to negotiate with the director whether I can come back as soon as the work is done, and he said they're looking for a solution. But I don't know whether it will happen."

The eviction attempts sparked outrage in thousands of people around the world, who signed several petitions in recent years in support of keeping Morandi on the island to continue the work he's been doing for the past three decades.

Until today, Morandi has kept the island pristine, attracted global attention with his pictures of Budelli on social media and even led small tourist groups through the island in summer, guiding them through the beauty of the place and sharing his message to respect nature.

"The ancient Greeks said that nature is, and humanity needs to adapt to it. But our society tells you 'When you see something beautiful that you like you need to buy it and possess it.'"

This is what was happening in Budelli before Italy declared it a place of "high natural value" in the early 1990s, says Morandi, as tourists would collect the pink sand from the beach to bring it home.

"But then do you see beauty when you look at a bottle of sand on your shelf at home? No, you see only a bit of sand, because beauty is something you perceive when you see that pink sand against the blue of the sea, the green of the Mediterranean flora, you smell its perfume and hear the wind between the trees and the waves crashing on the shore."

At the end of the month, Morandi will move to a flat in La Maddalena, not very far from Budelli, but still in a relatively isolated spot "as I'm not used to and I don't mean to fully return to society," he says.

He's obviously sad about leaving Budelli, but at the same time he seems both resigned to it and hopeful to make a comeback. It's a lesson he learned in 32 years of observing nature in solitude: accepting life as it happens, whatever form it takes.

He's optimistic that the park will continue his legacy.

"I have the impression this new director is trying to do good work. I talked to him and he seems a person who's very attentive to the environment and tries to do everything possible to keep Budelli the way I kept it until now. So I hope for the best."