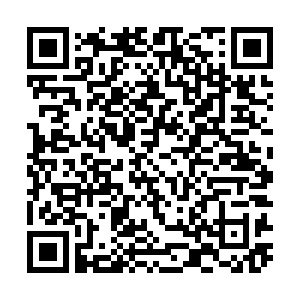 • Russia has authorized the one-shot Sputnik Light version of its COVID-19 vaccine for use, said the Russian Direct Investment Fund on Thursday.

• Poland has detected its first three cases of the variant first discovered in Brazil, according to the Eastern European country's health minister.

• The European Commission wants to speed up approval of experimental COVID-19 drugs, according to a document released by the EU executive on Thursday. The aim is to have at least three new medicines authorized by October.

• France's ministry of health said vaccinations are now open to those aged 16 and 17 with certain health conditions. They will receive the Pfizer-BioNTech jab, as it is the only one authorized for this age group.

• European Commission President Ursula von der Leyen said the EU is "ready to discuss how the U.S. proposal for a waiver on intellectual property protections for COVID-19 vaccines" could address the crisis in an effective and pragmatic manner. She also called upon "vaccine-producing countries to allow exports."

• World Health Organization Director-General Tedros Adhanom Ghebreyesus described the U.S. support for a global waiver on patent protections as a "historic decision" but pharmaceutical company Moderna says the move will not help boost supply in 2021 or 2022.

• Serbia's President Aleksandar Vucic has offered 3,000 dinars ($30.59) in cash to anyone who gets vaccinated by the end of May in an attempt to boost take-up. More than 1.5 million of Serbia's seven million population have had two doses already.

• Two leading members of Slovakia's ruling For the People party have resigned their posts in parliament after they were caught at a cafe in defiance of a 9 p.m. curfew. Deputy parliament speaker Juraj Seliga and colleague Jana Zitnanska were meeting Bratislava's regional governor, who has not resigned.

• Italy's Prime Minister Mario Draghi has announced Italy will allow tourists to enter the country without having to quarantine as soon as this month.

• Dutch researchers have trained bees, which have an unusually keen sense of smell, to identify COVID-19-infected samples. The scientists at Wageningen University say this could cut waiting times for test results to just seconds. It's a major shift for Brussels, which has argued waivers are not the way forward and has questioned whether temporarily suspending intellectual property (IP) rights would actually boost production. Europe has instead favored licensing arrangements for technology and know-how. But while Europe says it's open to discussion, Von der Leyen also called on "vaccine producing countries to allow exports and to avoid measures that disrupt," which is a not so subtle dig at the U.S..

While there is no formal ban on vaccine or raw material exports, Washington has evoked the Defense Production Act, which compels U.S. companies to fulfil their government contracts ahead of other orders. An EU official said leaders will discuss the patent waivers at a summit in Portugal on Friday. 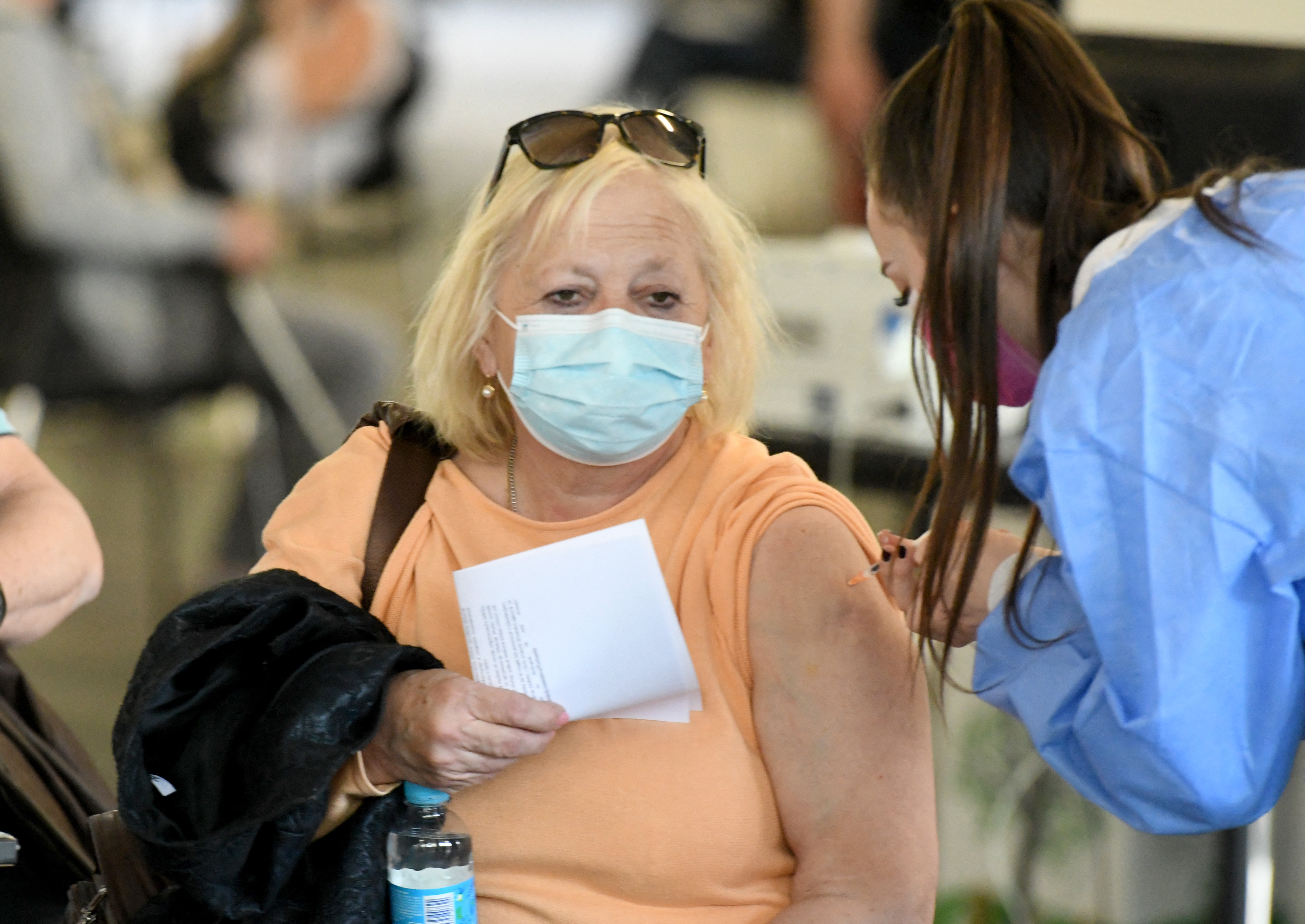 A woman receives the Pfizer-BioNtech vaccine at the Zagreb fair. Croatian authorities have been carrying out mass vaccinations of citizens. /Denis Lovrovic/AFP

A woman receives the Pfizer-BioNtech vaccine at the Zagreb fair. Croatian authorities have been carrying out mass vaccinations of citizens. /Denis Lovrovic/AFP

The UK is now under pressure to waive patents for COVID-19 vaccines after the U.S. indicated it would do so. Some members of parliament are now urging the UK and Europe to do the same to speed up the roll-out of jabs in low-income countries.

The Oxford University-AstraZeneca shot is the cheapest currently available. However, Downing Street says it is in discussion with the U.S. and the World Trade Organization to increase the production and supply of vaccines.

Germany is close to ending age restrictions on AstraZeneca's COVID-19 vaccine and could offer the jab in medical clinics and vaccination centers as soon as this weekend.

Health officials decided to reserve the vaccine for people aged 60 and over in March because of worries about rare blood clotting reported in a few patients receiving the jab. The European Medicines Agency ultimately said the vaccine was safe for use but suggested patients be more aware of the rare risks.

Health Minister Jens Spahn will address the parliament on Thursday to discuss the matter. Many patients aged over 60 have opted to wait for appointments to receive other vaccines, while people under 50 eagerly await their turn. Germany is hoping to meet EU goals that call for 70 percent of the population to be vaccinated by July.

The number of people being treated in hospital for COVID-19 in France has fallen again. Some 26,000 coronavirus patients are currently in hospital compared with the third wave peak of 30,000. The number of patients in intensive care is also down to 5,500.

France's President Emmanuel Macron is expected to visit a vaccination center in Paris on Thursday morning. The French government wants 20 million people to have received their first vaccination by the middle of this month but the present rate of injections shows the government is likely to fall just short of that target.

After the weekly Wednesday meetings to discuss the health situation, ministers are continuing to prepare for the next stage of easing restrictions, which is due on May 19.

The number of new COVID-19 infections reported in Hungary in the past 24 hours has risen by more than 500, a similar rise to the day before indicating there may have been a lag in reporting. Some 124 people have died from the coronavirus in the last 24 hours and more than 4,000 people remain in hospital.

This figure has dropped by nearly 300 and the number of people requiring ventilation has also decreased.

Hungary's government says it is the first country in Europe to have enough doses for everybody who wants to be vaccinated. As of Wednesday, people can now choose to have the Russian Sputnik V jab if they wish.

Those aged 16 to 18 are being urged to register online by Friday and will be vaccinated with the Pfizer shot. Johnson & Johnson's Janssen vaccine is also starting to be used in the vaccination program. 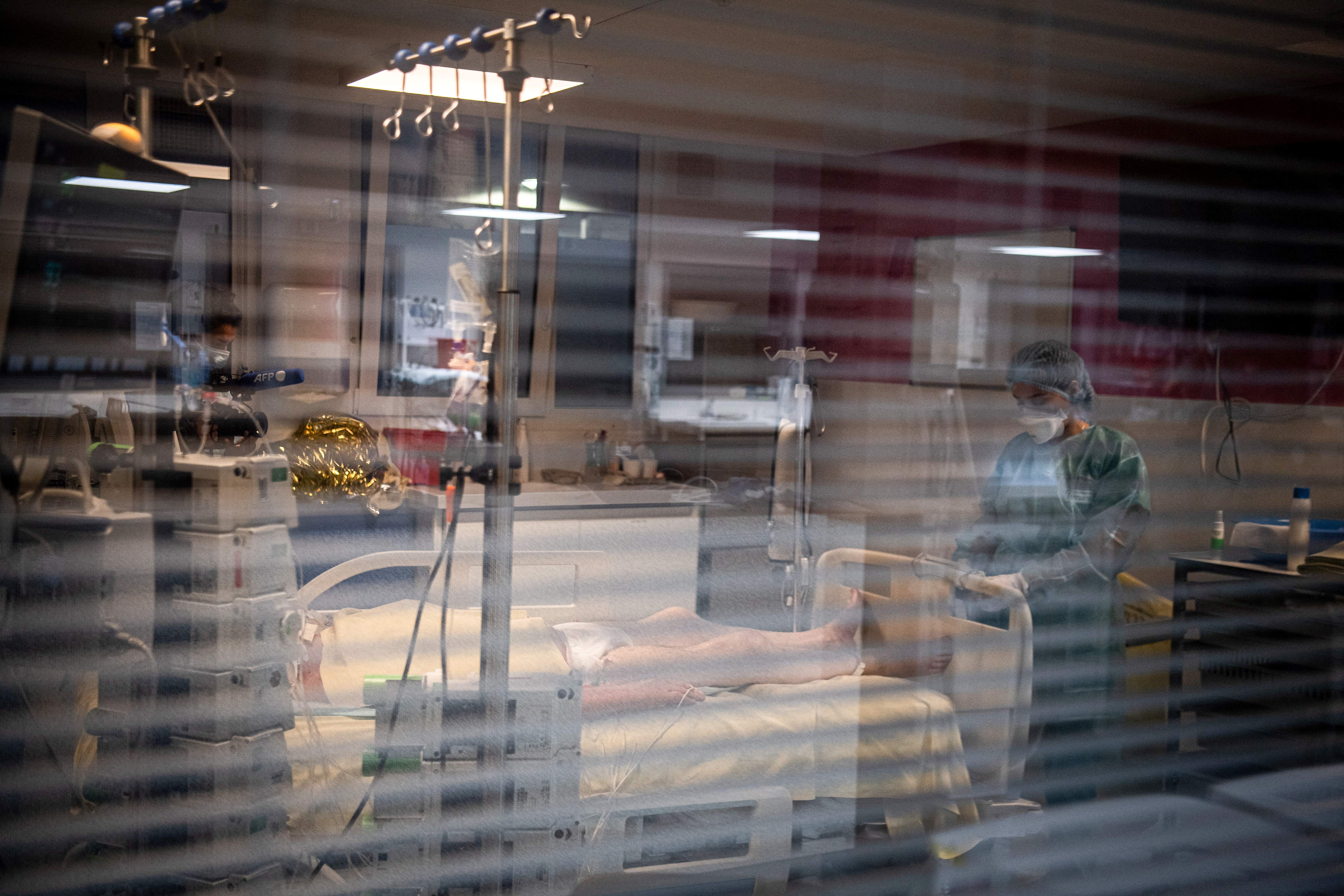 A member of the medical staff tends to a patient during her night shift in an intensive care unit set up for those infected with COVID-19 at Louis Mourier Hospital near Paris. /Alain Jocard/AFP

A member of the medical staff tends to a patient during her night shift in an intensive care unit set up for those infected with COVID-19 at Louis Mourier Hospital near Paris. /Alain Jocard/AFP