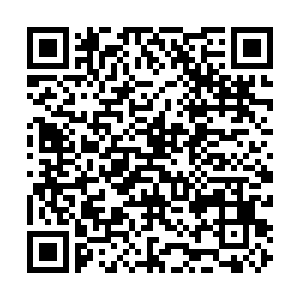 - Denmark's Supreme Court has sentenced a man to four months in prison for coughing at police officers while shouting "corona" during a routine traffic stop last March.

- A study on residents in the Austrian ski resort of Ischgl, the site of one of the country's worst outbreaks, found the majority of people living there remained immune, at least eight months after contracting the virus.

- Hungary's government has launched an online questionnaire asking its citizens to give their views on whether to lift the current lockdown restrictions. Officials are calling the list of seven questions a "national consultation," that is meant to gauge public sentiment.

- A nighttime curfew in the Netherlands is set to remain in place after the majority of parties in parliament voiced their support for an emergency government bill on Thursday, which would overrule a court order calling for the measure to be dropped.

- Health authorities in some European countries, such as Sweden and Germany, are facing resistance to the Oxford University-AstraZeneca jab after some hospital staff suffered side-effects, while other front-line workers were forced to call in sick, putting an extra strain on healthcare services.

- U.S. research carried out on the Pfizer-BioNTech vaccine suggests the variant first discovered in South Africa may reduce the jab's antibody protection by up to two-thirds.

- North Macedonia began its vaccination program on Wednesday, with doctors and medical staff the first to receive the jab. The country received its first batch of Pfizer-BioNTech doses from neighbor Serbia over the weekend.

- Research from France's University of Nantes suggests that one in five diabetes patients admitted to hospital with the virus dies within 26 days, while one in eight admitted were still in hospital 28 days after their first arrival.

- Switzerland is to begin easing its lockdown restrictions from March 1. Shops, museums and libraries will reopen, while zoos, public gardens and sports facilities could also open, with a final decision on those to come on February 24.

- Czechia has reported 1,227 new people admitted to hospital in a serious condition due to the virus, a record number since the start of the pandemic. The head of the country's medical chamber, Milan Kubek, has urged the government not to ease its lockdown restrictions amid reports it is planning to do so. 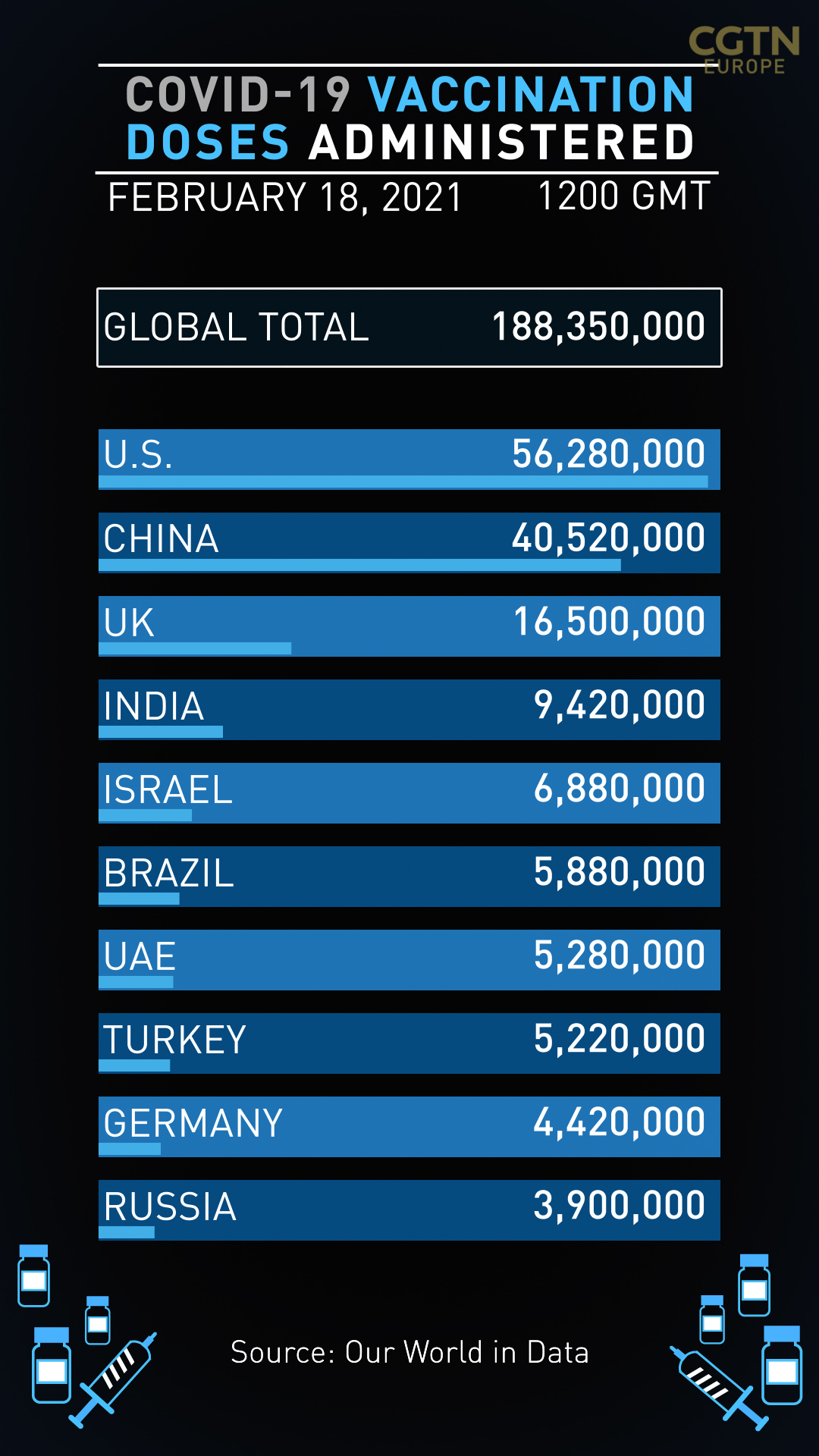 "The situation remains so fragile that the smallest thing could tip it," warned French government spokesman Gabriel Attal. He said it would be "totally unreasonable" to reduce efforts against COVID-19, because the French could "pay dearly for any form of relaxation."

The nationwide 6 p.m to 6 a.m. curfew has been in place for a month. An online consultation has been launched by the government over the idea of vaccine passports. Ministers want the public to reply to the questionnaire about how and what form a vaccine passport could take and if it would work to give access to theaters, cinemas, sports grounds and museums.

Four more experts have been added to the national scientific council, which advises the French government on the pandemic. There are now 17 members. President Emmanuel Macron says it is "intolerable" that Africa is disadvantaged in access to vaccines.

"We must respond to this glaring inequality," said Macron during a video conference with the leaders of South Africa, Egypt, Senegal, Democratic Republic of the Congo, and the Comoros.

It was a meeting aimed at identifying "priority areas of effort" in African countries to "bring their voices" to the videoconference of G7 leaders, scheduled for tomorrow, February 19, which will be devoted in part to the COVID-19 crisis. 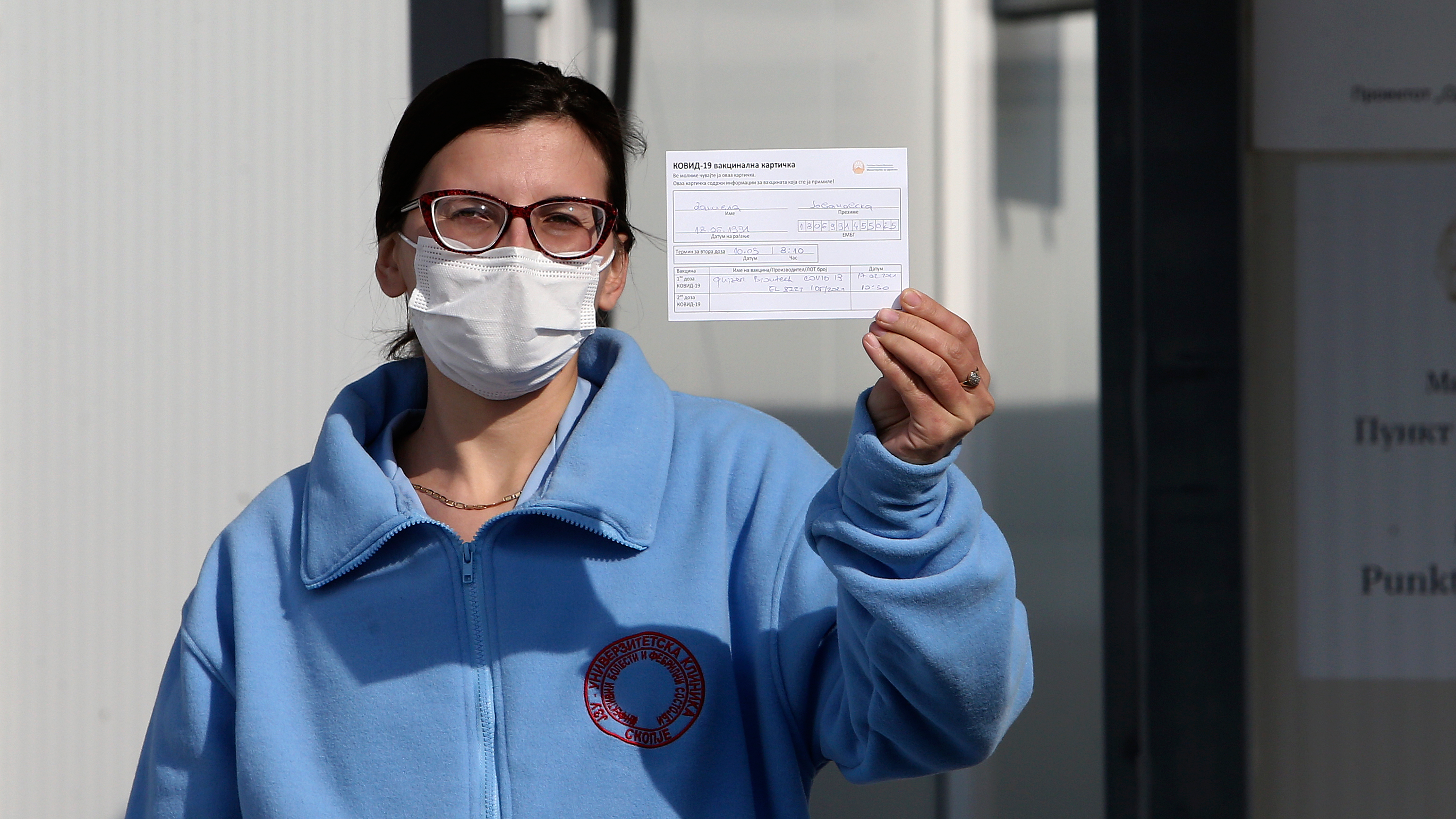 North Macedonia began its vaccination program on Wednesday, with doctors and medical staff the first to receive the jab. /AP

North Macedonia began its vaccination program on Wednesday, with doctors and medical staff the first to receive the jab. /AP

The reproduction, or R, number – the rate of spread of the COVID-19 virus – is on its way down across England.

The latest study from London's Imperial College has found infections have dropped by two-thirds across the country.

The greatest fall has been in London and the southeast. Infection rates have not dropped as dramatically in the north.

The React study puts the R number at 0.72. It has to be below 1 for the rate of infection to start shrinking. It's now estimated that one in 200 people is carrying the virus.

The highest infection rates are now in the five to 12 age group and in those aged 18 to 24.

Researchers at Imperial College say, while the results are encouraging, the prevalence of the disease is still as high as it was in September last year and hospital admissions are at the level they were during the first wave. 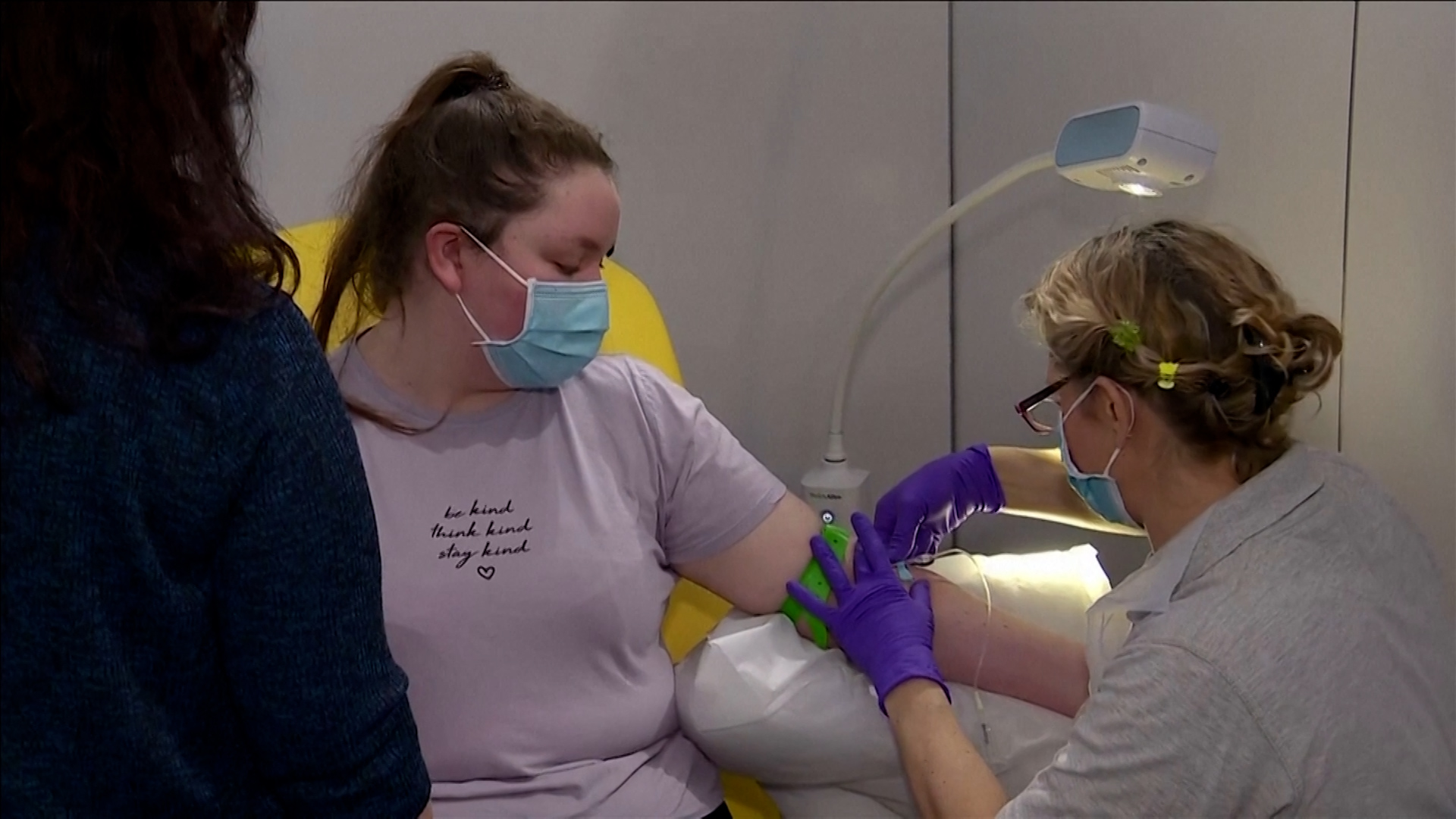 Hungary says it could inoculate 70 percent of its population against COVID-19 by June, thanks to its use of multiple vaccines.

Officials say due to its use of Russia's vaccine and its plan to start using China's Sinopharm jab, 3.5 million more people will be vaccinated by the end of May than if the country had relied on the EU procurement process.

On Wednesday, Prime Minister Viktor Orban called for vaccines to be "depoliticized" and said: "We cannot divide vaccines into the Eastern and Western vaccines."

Meanwhile, 1,548 new cases of the coronavirus were recorded in Hungary on Wednesday, nearly double the figure of the previous day.

Many of Belgium's small businesses won't survive past the Easter holidays, warned the country's Federal Minister for SMEs David Clarinval. In an interview with the newspaper De Standaard, Clarinval urged the government to release a detailed strategy on lifting COVID-19 restrictions after their meeting next Friday.

The advisory panel is more likely to suggest loosening restrictions once infection and hospitalization numbers dip below a particular benchmark.

Bars, cafes and restaurants have been shuttered for nearly four months and are only allowed to offer takeaway services. Other contact services such as tattoo parlors will reopen on March 1 and small shops were allowed to reopen before Christmas, but under strict distancing and hygiene restrictions.

New infections continued to fall, down 18 percent in the past week to an average of 1,792 a day. Hospital admissions are also down to 119 per day. 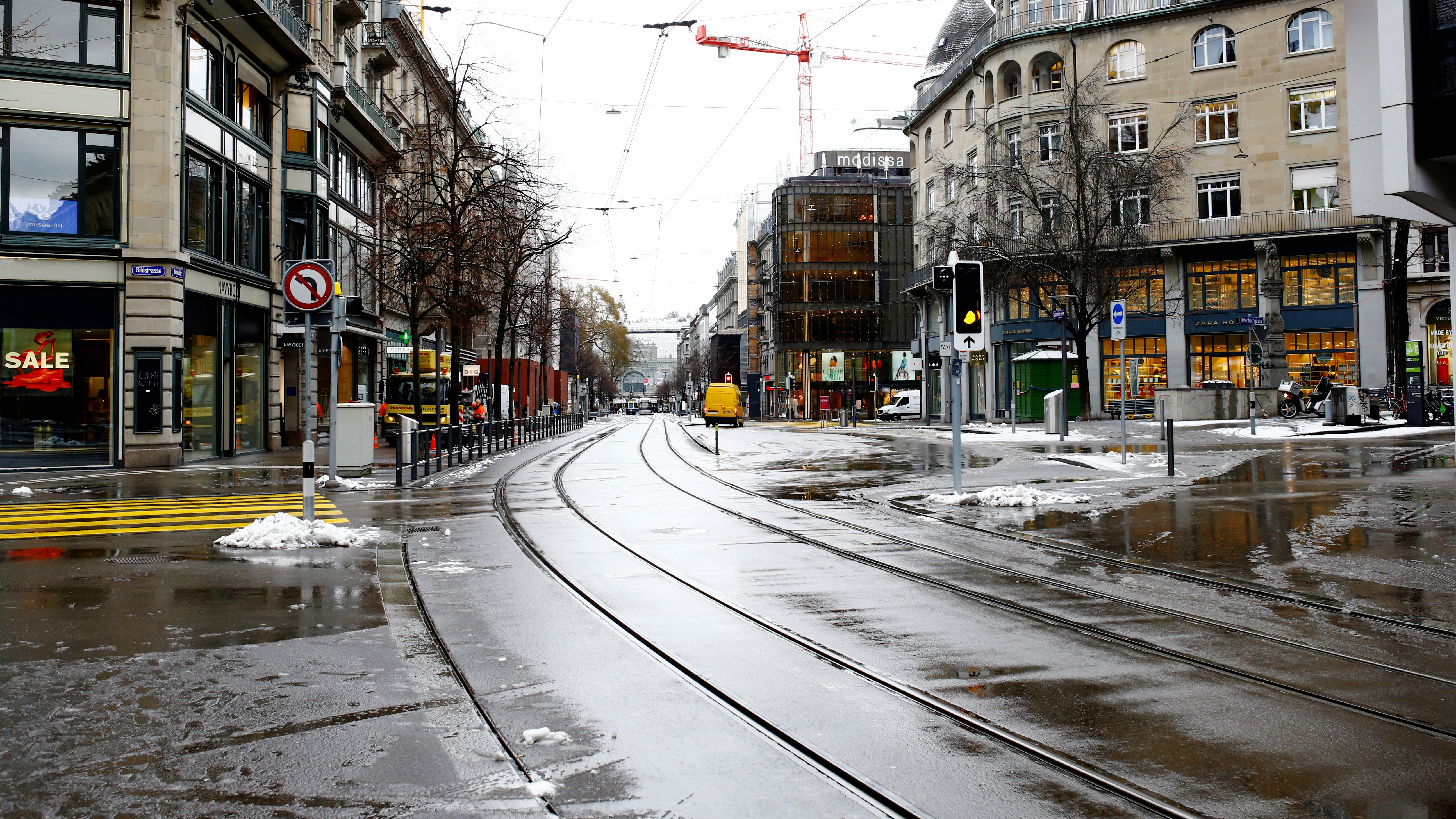 Switzerland is to begin easing its lockdown restrictions from March 1. /AP

Switzerland is to begin easing its lockdown restrictions from March 1. /AP