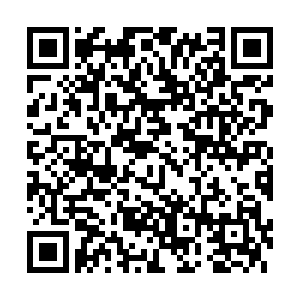 • The European Commission said on Friday it had agreed a plan to control exports of vaccines from the European Union, including to Britain, arguing it needed to do so to ensure its own supplies. "This is an insurance policy," EU Health Commissioner Stella Kyriakides told a news conference.

• A spokesman for the UK government said it would be "carefully considering its next steps", while Northern Ireland's first minister Arlene Foster, from the Democratic Unionist Party, called it an "incredibly hostile and aggressive act."

• The Novavax vaccine was 89.3 percent effective in preventing COVID-19 in a UK trial and nearly as effective in protecting against the more contagious UK-discovered B.1.1.7 variant, according to a preliminary analysis announced by the company.

• Shortfalls in Moderna vaccine deliveries will hit yet more countries across Europe, with Italy and Poland joining France and Switzerland in announcing the company's shipments for February would miss expectations.

• Russia could supply the EU with 100 million doses of its Sputnik V shot – enough to vaccinate 50 million people – in the second quarter of 2021, the Russian Direct Investment Fund, which markets the shot abroad, tweeted on Friday.

• The immunologist coordinating France's vaccination strategy said European health authorities should review the possible use of any safe vaccine without "bias" about its origin. Alain Fischer made the comments after being asked about Hungary buying Chinese and Russian vaccines.

• Russia will launch the one-dose "Sputnik-light" vaccine in February, with its producers seeing it as a possible temporary solution to help countries with high infection rates make their vaccine supplies go further.

• Swiss drugmaker Novartis has signed an initial agreement to provide manufacturing capacity for the Pfizer-BioNTech vaccine, a move aimed at helping boost production as supplies fall shy of demand.

• COVID-19 hotspots in the EU will be labeled "dark red" zones to discourage all but essential travel, EU governments agreed on Friday.

• An unused military field hospital in Prague will be packed up due to staff shortages even as high numbers of patients stretch Czech healthcare facilities to the limits, officials said on Friday.

• A fire killed five patients at a COVID-19 hospital in Romania's capital Bucharest early on Friday and 102 others were evacuated, officials said. It was the second deadly hospital fire in the EU state in less than three months.

• Personal information of a large number of people who participated in the Netherlands' coronavirus track-and-trace program has been leaked, the Dutch health authorities confirmed on Friday.

• British Airways said it would trial the mobile travel health passport VeriFLY on flights between London and the U.S.. The app combines travel verification documents and COVID-19 test results.

• Sweden's health agency has recommended the government require travelers show a negative test result before entering the country, in a bid to keep new variants of the virus from spreading.

WHY IS THE UK DEATH TOLL SO HIGH?

RICH GET RICHER IN PANDEMIC 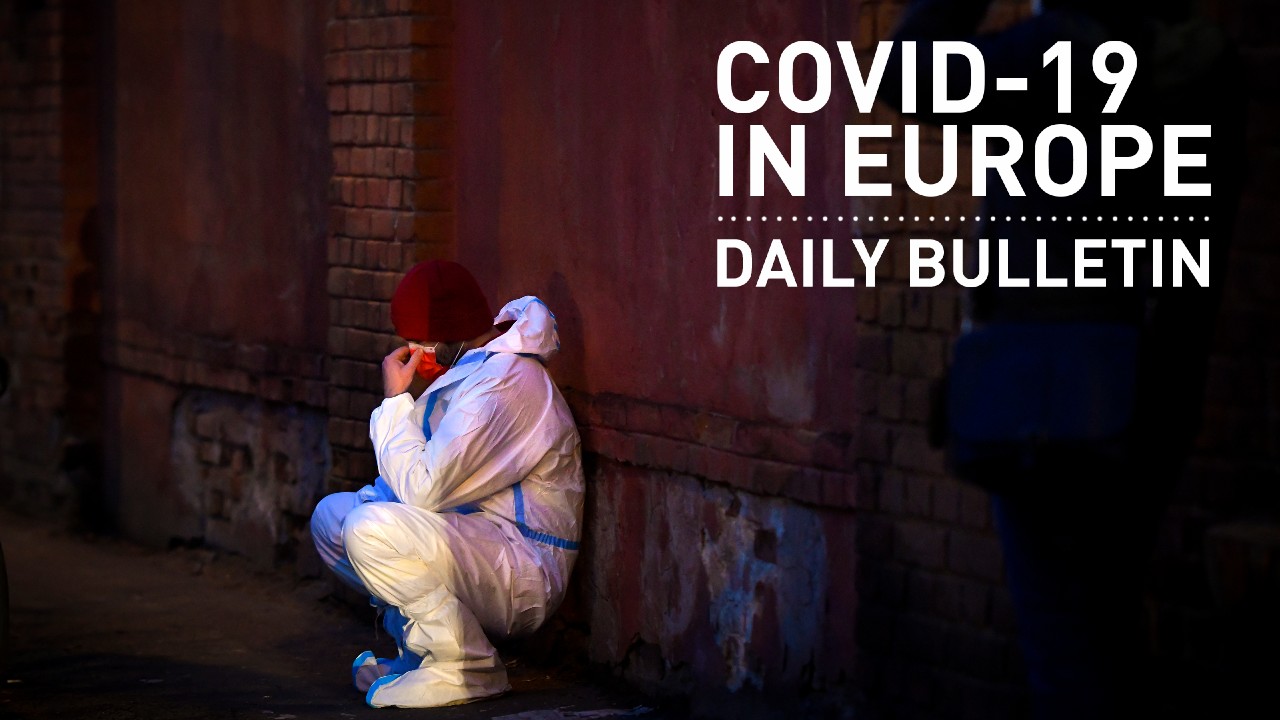 An emergency paramedic leans against a wall outside the Matei Bals hospital in Bucharest, Romania, after a fire there early on Friday killed four people. /Andreea Alexandru/AP

An emergency paramedic leans against a wall outside the Matei Bals hospital in Bucharest, Romania, after a fire there early on Friday killed four people. /Andreea Alexandru/AP

Belgium has reportedly notified the European Commission of its plans to limit the export of essential medicines and ingredients, as the vaccine supply row with AstraZeneca continues. Belgium is home to major production sites for Pfizer and AstraZeneca. If allowed, the export controls would go beyond ones to be introduced by the Commission on Friday, which will only limit vaccine exports.

Belgium's rate of new cases continues to climb, up 12 percent in the past week, with an average of 2,210 new cases a day. Belgian health officials say they have found no causal link between 14 people, all older than 70, who died after receiving COVID-19 vaccinations.

Friday will be a crucial day in Europe's fight to overcome vaccine shortages and slow immunization rates. The Commission will start requiring companies seeking to export jabs internationally to get permission first.

Brussels says it's about transparency but blocking shipments in the middle of a global pandemic will anger many. If this fails to solve the problem, European Council President Charles Michel has raised the prospect of invoking an emergency provision in the EU treaties to ramp up production. This could include forcing vaccine-makers to share patents or other licenses.

Meanwhile, the European drugs regulator is expected to approve the AstraZeneca vaccine for use across the bloc today. It's unclear though if the EMA will recommend its use for all age groups after Germany's vaccine committee recommended the jab not be used in over-65s due to insufficient data.

There are binding orders and the contract is crystal clear
-  Ursula von der Leyen, president of the European Commission

The country also signed a deal for 5 million doses of the jab, which will be delivered over four months.

Prime Minister Viktor Orban, who has said he would take Chinese vaccine himself, had been pressuring health authorities to approve the shot. On Thursday, the government signed a decree changing the approval process for vaccines.

Under the new law, a product can be approved for emergency use by the government if it has already been used in 1 million people.

It's been a busy morning for reporters covering Jens Spahn, as Germany's health minister found himself fielding questions about the AstraZeneca vaccine.

On Thursday, the country's Robert Koch Institute had said it would not recommend the use of the AstraZeneca jab for the over-65s, citing "insufficient data" – but Spahn said Germany's vaccination committee will make a recommendation after the EU's regulator, the European Medicines Agency (EMA), publishes its own approval decision, due later on Friday. Spahn expects the EMA approval to note that lack of data.

The EU is also embroiled in a row with AstraZeneca over supply-chain problems, which have left many countries in the bloc short of doses. Nevertheless, Spahn insisted that Germany, which is also rolling out the Mooderna and Pfizer-BioNTech jabs, aims to offer vaccinations to all people aged at least 80 in the first quarter. 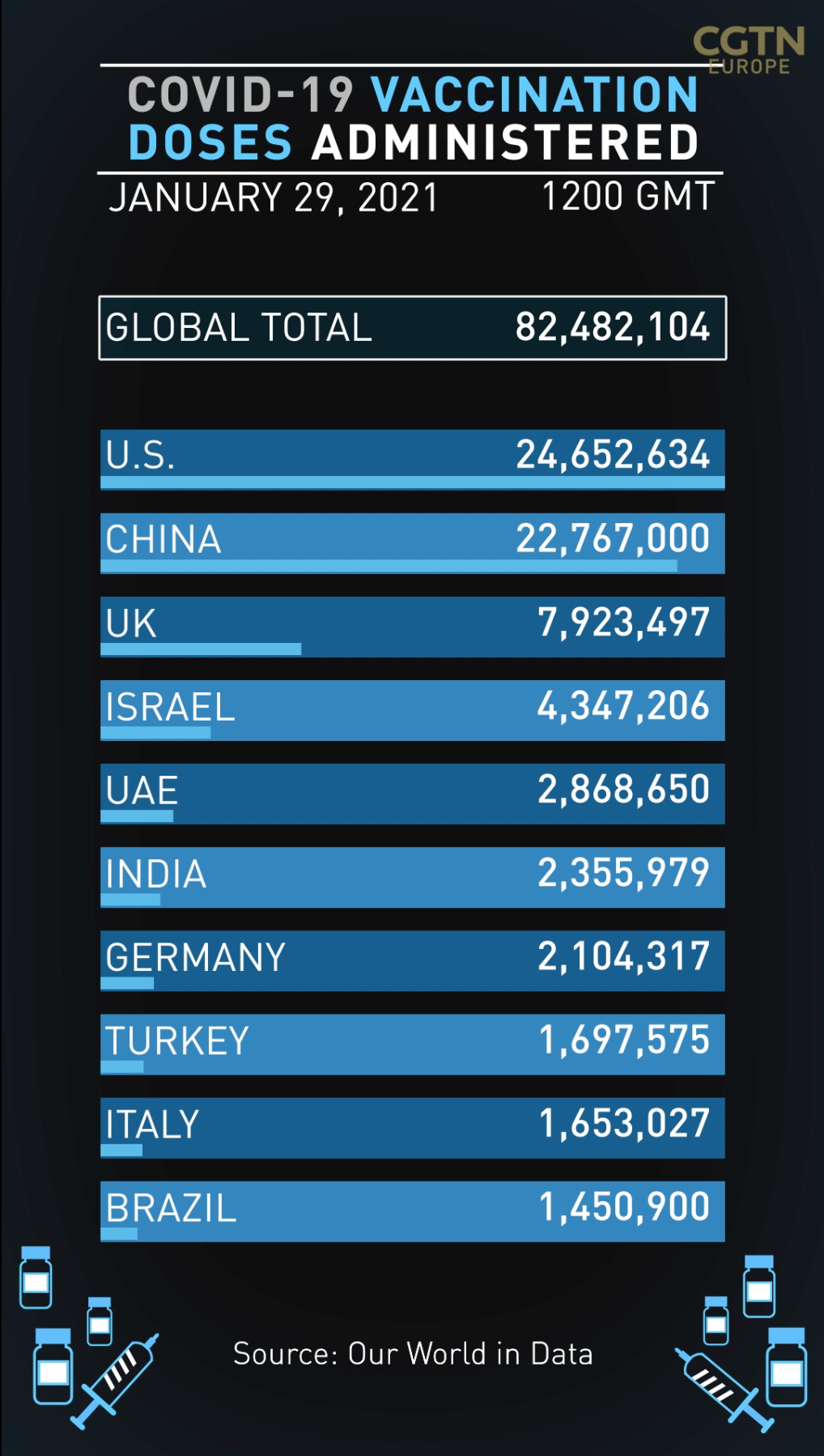