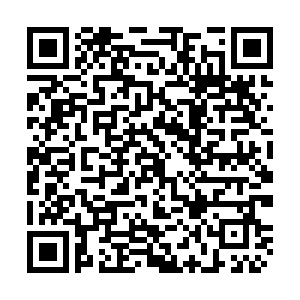 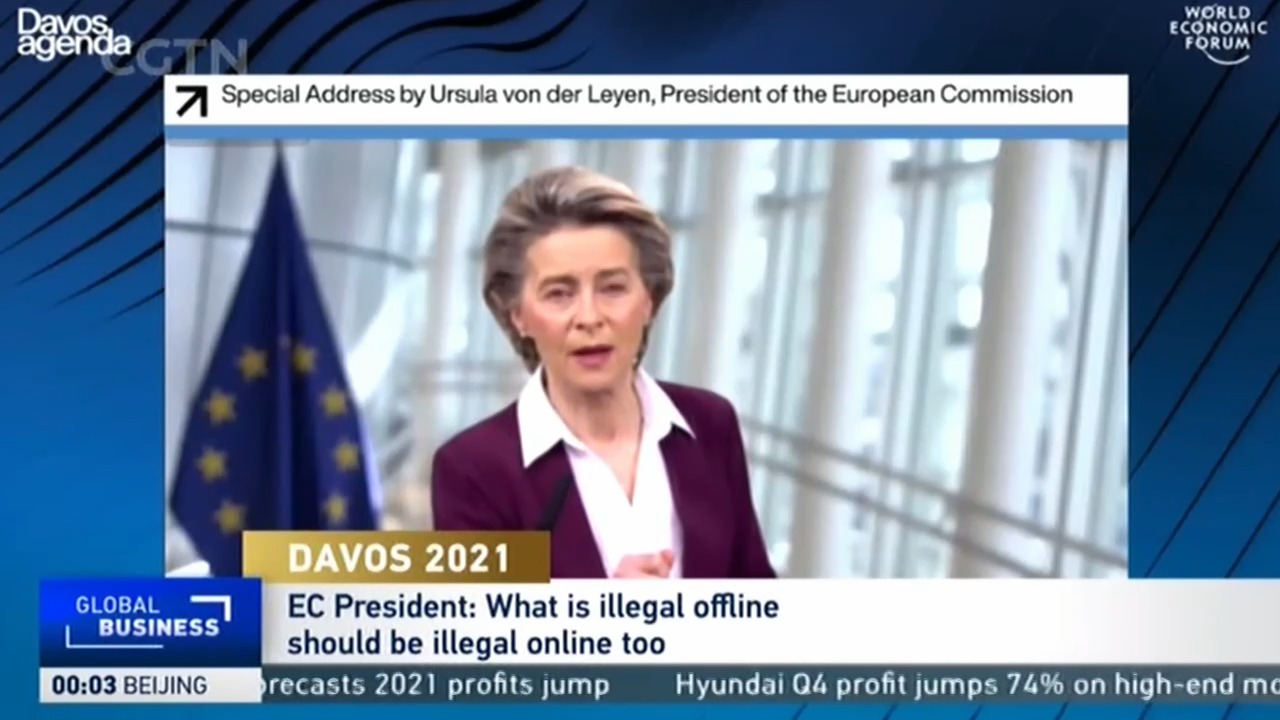 European Commission President Ursula von der Leyen has called for a global agreement on protecting biodiversity, a call reinforced by Germany's Chancellor Angela Merkel and France's President Emmanuel Macron, who linked the issue to the global COVID-19 pandemic during their video speeches at the World Economic Forum (WEF).

Merkel took the opportunity in her address to highlight the importance of global cooperation and called for a "fair" distribution of the vaccine across the world.

Addressing the WEF via video on Tuesday, Von der Leyen said the EU would lobby for a deal to protect biodiversity at the COP-15 United Nations biodiversity summit in Kunming, China – provisionally slated for early October – with the same scale and ambition as the Paris Climate Agreement concluded in 2015.

"This will have to be like COP21 was for climate, because we need a Paris-style agreement for biodiversity," she said.

READ MORE: From the arcade to the office: VR at work

Von der Leyen emphasized the need to learn from the COVID-19 crisis and pointed to the links between biodiversity loss and global pandemics.

"We have to change the way we live and do business to be able to keep what we value and hold dear," she said.

"If we don't urgently act to protect our nature, the next pandemic will be around the corner," the former German politician, who was herself a trained doctor before entering politics, said.

She spoke of business interests in protecting nature, saying that more than half of global GDP is dependent on high-functioning biodiversity and ecosystems, and she reiterated the importance of the European Commission's economic recovery plan – her so-called "Green Deal" – which would boost growth, while reducing greenhouse emissions and protecting biodiversity. 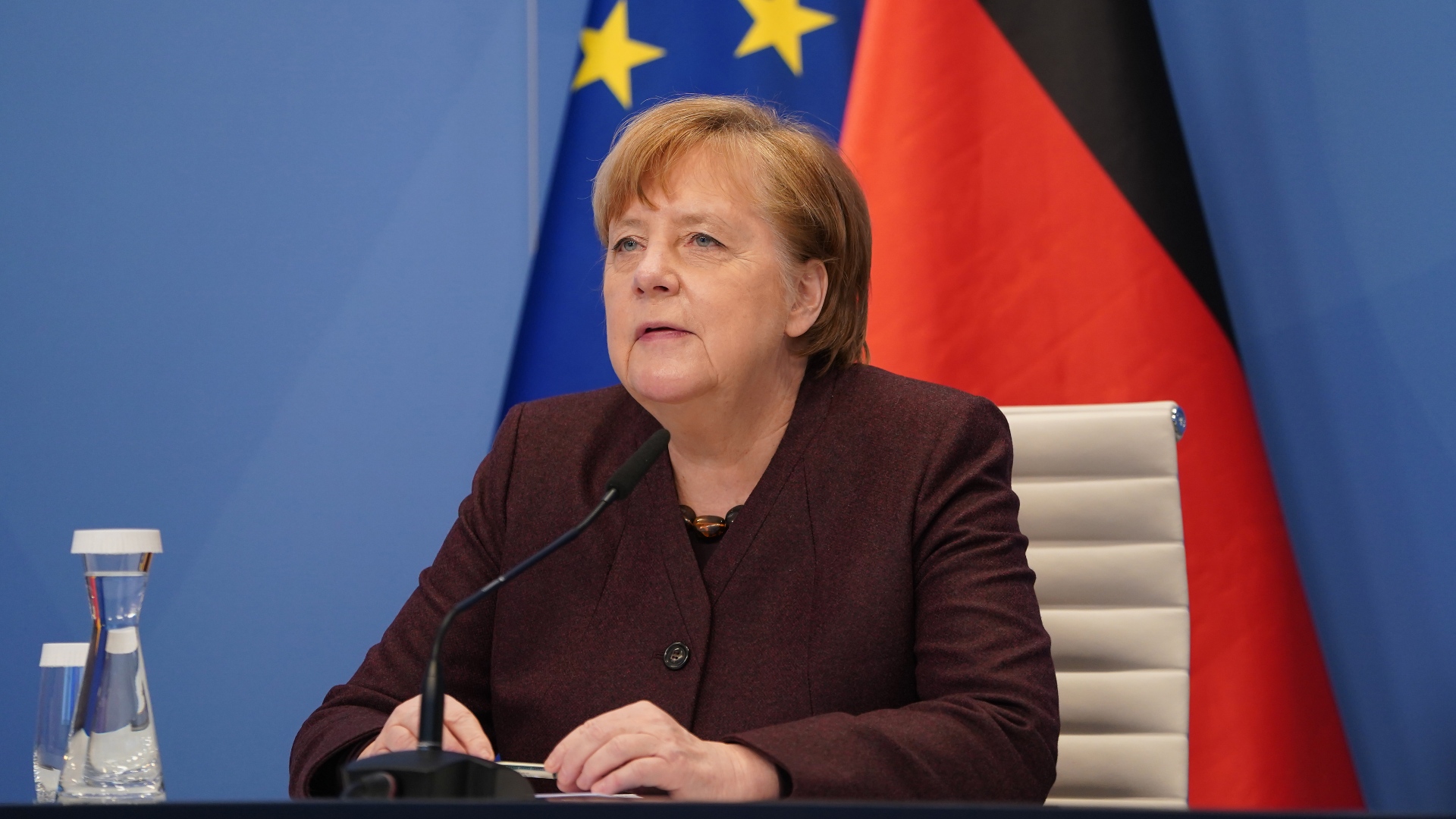 Germany's Chancellor Angela Merkel spoke of the need for global cooperation to learn from the lessons of the COVID-19 pandemic. /Sean Gallup/Pool/AFP

Germany's Chancellor Angela Merkel spoke of the need for global cooperation to learn from the lessons of the COVID-19 pandemic. /Sean Gallup/Pool/AFP

Lessons from the pandemic

Angela Merkel told the WEF one lesson learnt from the COVID-19 pandemic was humanity's vulnerability as part of the natural world.

She said the pandemic demonstrated the need for change and swift action, while also praising the global response around the success of the vaccine programs and the value of international cooperation and multilateralism.

France's Macron added that the world's vulnerability to COVID-19 highlighted lessons that would benefit society in the post-pandemic world.

"The economy of tomorrow is going to have to be an economy that thinks about innovation and humanity, and it's going to have to build competitiveness together with the climate challenge, reducing CO2 emissions, adapting our societies, the biodiversity agenda," he explained.

Merkel said the pandemic showed humankind's capabilities in scientific research, such as the development of the vaccine, adding: "I think this shows a way out of this pandemic, although this is going to be a very arduous road, much of an uphill battle, much more difficult than many think."

She stressed the value of cooperation and warned against being inward-looking.

"It's become very clear to me, even more clear, I should say, that we ought to choose a multilateral approach. That shutting ourselves off against others will not help us to solve our problems," Merkel said. "This is the hour of multilateralism."

She also called for "fair distribution" of coronavirus vaccines across the world, warning that the memories of countries left out in the race for the life-saving jabs would persist.

"Money is one thing, but the other thing in a time of scarcity is the availability of the vaccine. Here it's about a fair distribution and not about a question of money," she said.

READ MORE: What the world has learnt from lockdown

In her speech, Ursula von der Leyen took a different angle on vaccine distribution concerns, by addressing the mounting tensions between her European Commission and pharmaceutical firms that have delayed COVID-19 vaccine deliveries, insisting the companies "must deliver."

"Europe invested billions to help develop the world's first COVID-19 vaccines," she said. "And now, the companies must deliver. They must honor their obligations," she added.

The Commission is demanding answers from British-Swedish group AstraZeneca and U.S. company Pfizer about delays both have announced to their deliveries to the European Union.

In a sign of concern that pharmaceutical groups might be selling the earmarked doses to higher bidders outside the bloc, it is requiring the companies to notify authorities of any exports to outside the European Union.

Von der Leyen explained, "we will set up a vaccine export transparency mechanism" to "ensure" the firms meet their contractual obligations to the EU.

The issue is sensitive for Von der Leyen, who spearheaded efforts to have the Commission procure more than 2 billion doses of potential COVID-19 vaccines for the bloc's 27 member states, home to 450 million people.

The pace of the EU roll-out has lagged the U.S., the UK and Israel, though member states including Malta, Denmark and France have started to accelerate their programs.

In her speech, Von der Leyen said the Commission's vaccine procurement was not for the EU alone but also for poorer non-EU countries that are to be supplied through a COVAX vaccination alliance co-led by the World Health Organization.

As part of a longer-term strategy to head off this and future health crises, Von der Leyen said the EU would propose a public-private entity under a new European Health Emergency Response Authority.