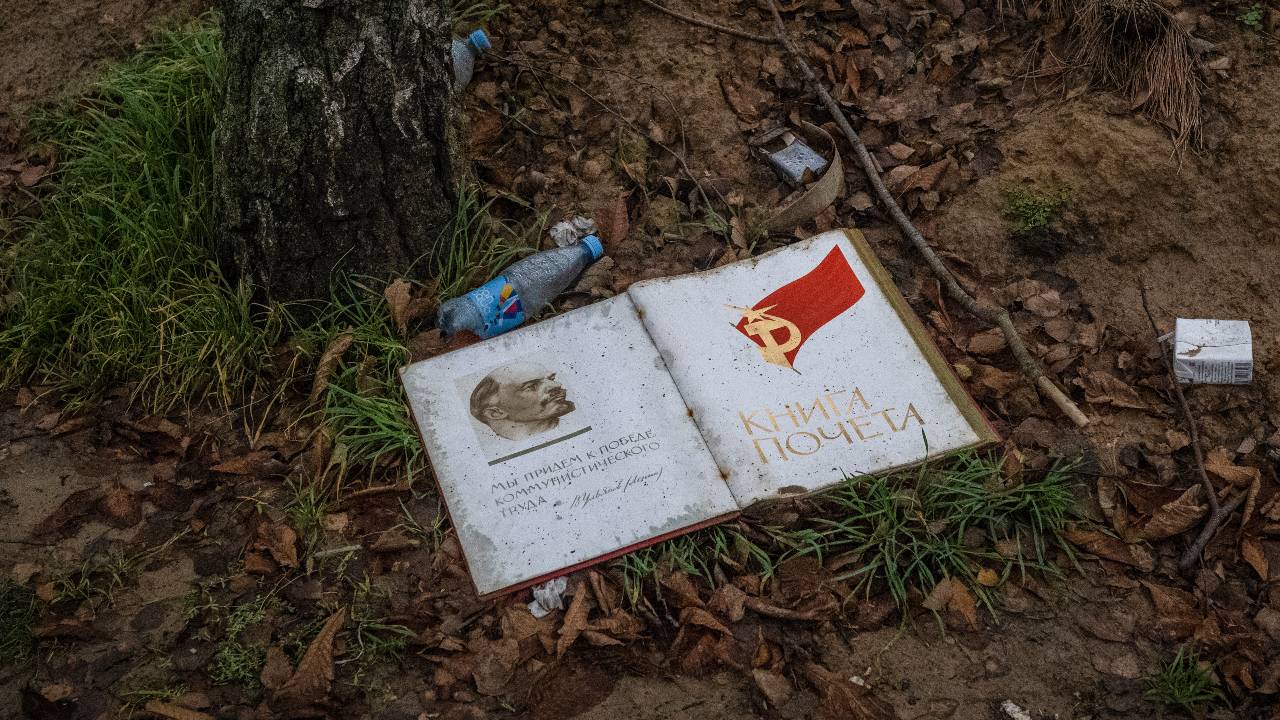 A book containing a photograph of Soviet Union founder Vladimir Lenin at the International Airport of Kherson. /Bulent Kilic/AFP.

A book containing a photograph of Soviet Union founder Vladimir Lenin at the International Airport of Kherson. /Bulent Kilic/AFP.

· The Kremlin vowed to hunt down those it said "murdered" Russian soldiers in Ukraine after footage surfaced online and spurred mutual war crime allegations from Kyiv and Moscow.

· The United Nations' (UN) atomic watchdog chief has denounced "targeted" strikes at Ukraine's Russian-controlled Zaporizhzhia nuclear plant, calling for a "stop to this madness", as Kyiv and Moscow traded blame.

· President Volodymyr Zelenskyy marked Ukraine's annual Day of Dignity and Freedom on Monday by hailing the sacrifices made by Ukrainian people in a video address and saying his country would endure and prevail.

· The Norwegian government on Monday said it had agreed to assist Ukraine with gas procurement for the coming winter, providing funding amounting to 2 billion Norwegian crowns ($195 million).

· Turkish President Tayyip Erdogan said he had agreed with Russian counterpart Vladimir Putin to produce flour in Türkiye from Russian wheat and send it for free to the least developed countries in order to ease a global food crisis, broadcaster Haberturk reported.

· The Kremlin said on Monday it was not discussing calling up more Russian soldiers to fight in Ukraine through a second round of mobilization. Russia called up more than 300,000 reservists in a controversial mobilization drive launched in September.

· Russian forces are pounding Ukrainian positions with artillery fire and in the eastern region alone launched almost 400 strikes on Sunday, President Volodymyr Zelenskyy said in a video address. "The fiercest battles, as before, are in the Donetsk region. Although there were fewer attacks today due to worsening weather, the amount of Russian shelling unfortunately remains extremely high," Zelenskyy said.

· A new training center for Ukrainian troops in the central Spanish city of Toledo will start operating at the end of November, Spain's Prime Minister Pedro Sanchez told the NATO Parliamentary Assembly on Monday. Spanish police will also be deployed in Ukraine over the coming weeks to help investigate alleged Russian war crimes, he added.

· Ukraine has exported almost 16.2 million tonnes of grain so far in the 2022/23 season, down 31.7 percent from the 23.8 million tonnes sent by the same stage of the previous season, agriculture ministry data showed on Monday.

· Italy's government will ask parliament to approve a new law on military and civilian supplies to Ukraine throughout 2023, Defense Minister Guido Crosetto said in an interview published on Monday. 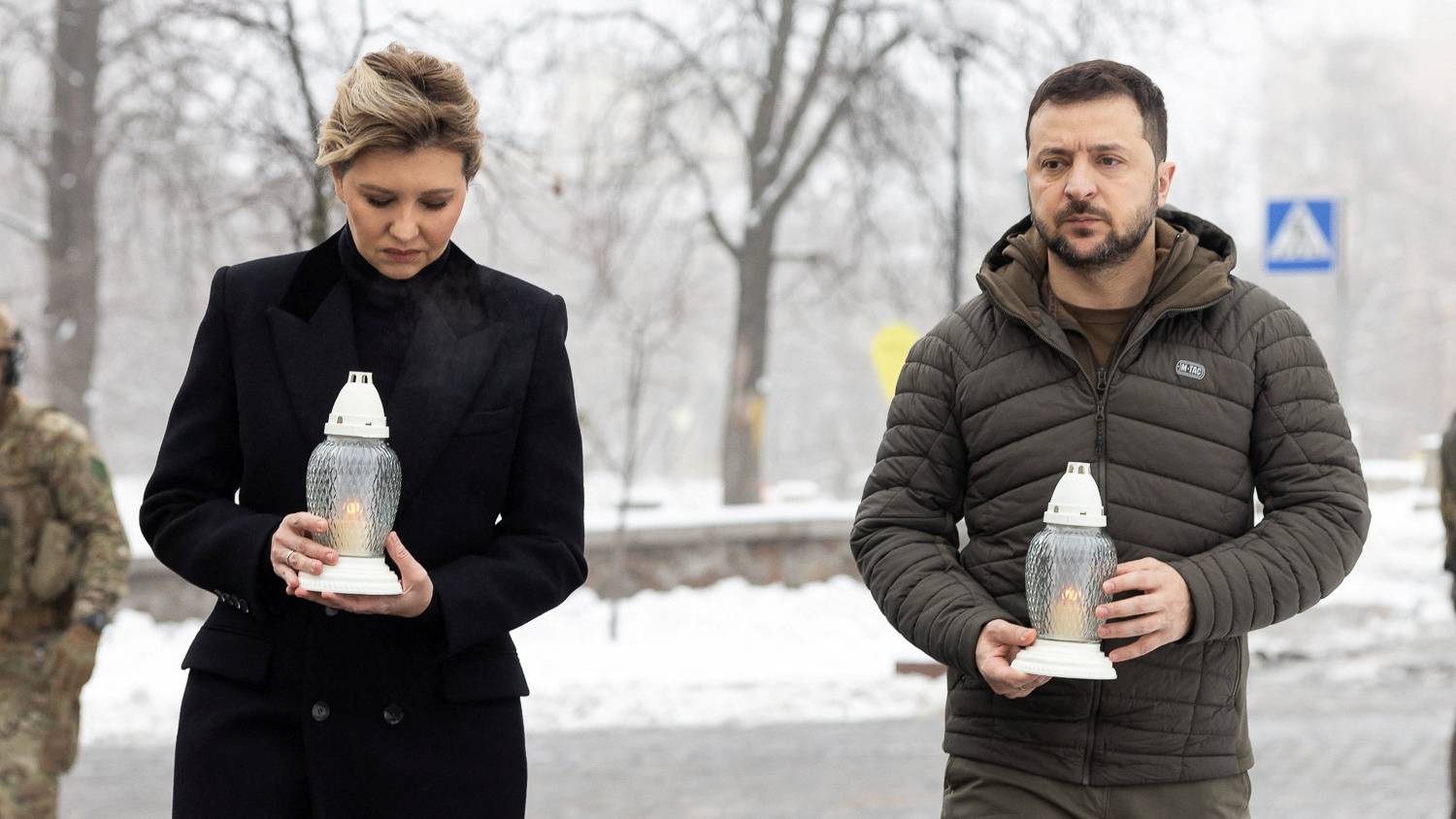 Ukraine's President Volodymyr Zelenskyy and wife Olena Zelenska attend a Kyiv commemoration ceremony at a monument to those killed during the Ukrainian pro-EU demonstrations in 2014. /Ukrainian Presidential Press Service/Handout.

Ukraine's President Volodymyr Zelenskyy and wife Olena Zelenska attend a Kyiv commemoration ceremony at a monument to those killed during the Ukrainian pro-EU demonstrations in 2014. /Ukrainian Presidential Press Service/Handout.

The Kremlin said on Monday it would bring to justice people responsible for the "murder" of Russian soldiers in Ukraine after footage appeared on social media last week showed reportedly showed the bodies of Russian servicemen killed after surrendering to Kyiv's troops.

Ukraine has denied that its forces had killed prisoners of war, saying the soldiers were shot following a false surrender.

"Without a doubt, Russia will itself search for those who committed this crime. They must be found and punished," Kremlin spokesman Dmitry Peskov told reporters. The defense ministry said last week that the videos showed the "deliberate and methodical murder" of more than 10 servicemen.

The UN said last week it had been made aware of the videos and was looking into them. A report it released earlier last week said there were credible allegations of abuses committed by both sides.

The footage has not been independently verified and Ukraine has refuted Russia's accusations.

"The news from our team yesterday and this morning is extremely disturbing," Grossi said in a statement. "Explosions occurred at the site of this major nuclear power plant, which is completely unacceptable.

"Whoever is behind this, it must stop immediately. As I have said many times before, you're playing with fire."

There were more than a dozen blasts overnight on Saturday into Sunday, some of which a team of experts from the agency on site had themselves seen, the IAEA said in a statement.

The IAEA is to send a team of experts to the plant, the biggest nuclear facility in Europe, and which is currently controlled by Russian troops.