A general view of the site of the explosion in Przewodow, a village in eastern Poland near the border with Ukraine. /Jakub Szymczuk/Poland's President Office/Reuters

A general view of the site of the explosion in Przewodow, a village in eastern Poland near the border with Ukraine. /Jakub Szymczuk/Poland's President Office/Reuters

The eastern Polish Village where a missile exploded on Tuesday, killing two agricultural workers, remains in a state of shock. They have lived next door to the conflict over the border in Ukraine for the last nine months and were among the first to provide help to refugees fleeing the fighting.

Przewodow was a fairly anonymous, quiet village in the farthest eastern region of Poland. Now, soldiers patrol the fields close to the blast site from a missile impact. A major investigation is underway to establish where the missile was fired from.

Ewa Byla, the headteacher of the local primary school, explained that not long before, the children had been preparing projects for Polish Independence Day.

Now, lessons would focus on explaining to them what had happened.

"The most difficult moments were at the beginning of the war. After many weeks of this, we became pretty calm, and now, with this explosion, we were shaken awake by what was going on," said Byla.

"We are treating this like an accident, and we must convince the children that we live in a safe country. That this danger doesn't affect children here in a direct way. That it was an accident, a terrifying accident that happened."

Local resident Kinga Kancir said that people are scared and there are still so many unanswered questions including why it happened and how?

"Yes, we have fear. It is not a pleasant thing that has happened here. Something has hit here, we don't know yet what because there is nothing confirmed yet," said Kancir. "And two people were killed, not so old, and relatively young. Both their families are going through sadness, grief and pain, because they went to work and have not come back." 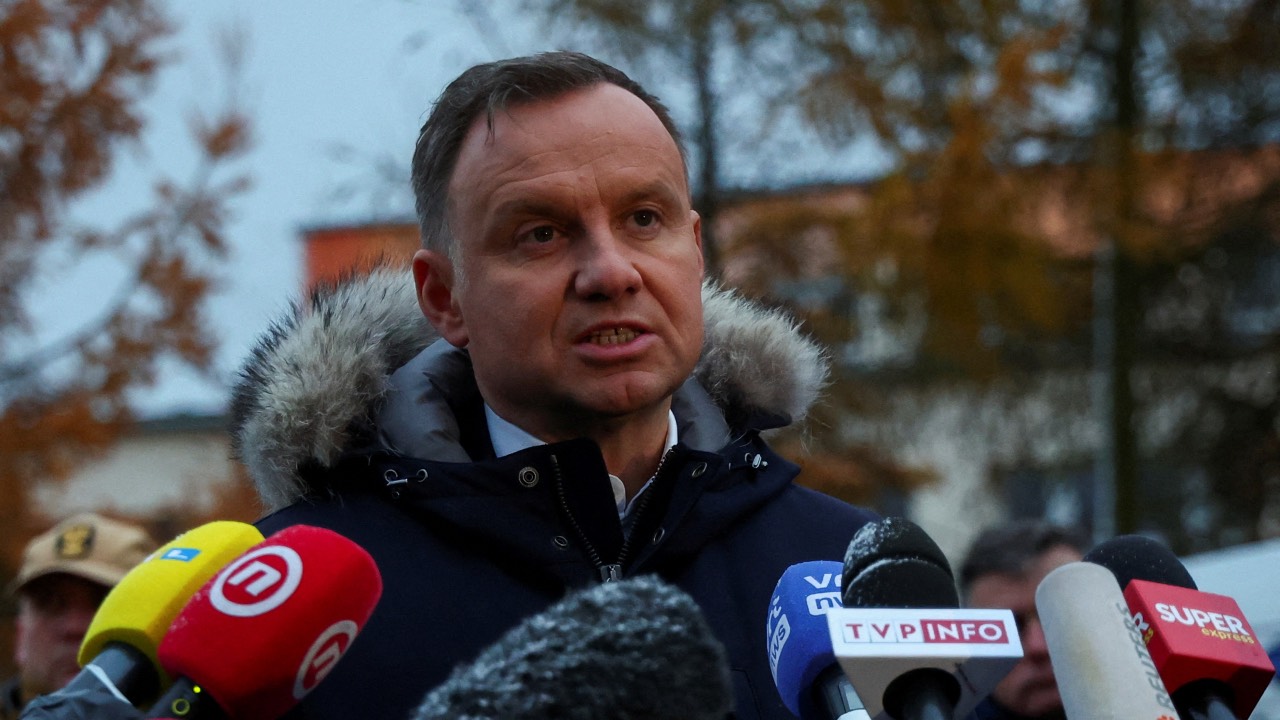 Polish President Andrzej Duda speaks to media during his visit to the site of the explosion in Przewodow. /Kacper Pempel/Reuters

Polish President Andrzej Duda speaks to media during his visit to the site of the explosion in Przewodow. /Kacper Pempel/Reuters

The missile strike led to fears this place could have seen a significant escalation of the conflict between Russia and Ukraine, potentially spreading beyond the borders of Ukraine and into a NATO state.

Grzegorz Drewnik, Mayor of the commune Dolhobyczow, told CGTN that he feared the worst when the news first came through.

"When I arrived at the office, it was clear that something unusual had happened. I was sitting there looking at my phone to see if anybody could provide any information about what was going on where I was," said Drewnik.

"I was looking to see if other rockets had struck in other places, if there had been a counterattack because everybody around me was convinced, this was the beginning of the third world war."

'Another rocket could fall too'

The Polish President Andrej Duda has visited the village to see the impact site and the investigation first hand. The Polish government and NATO leadership have been working on evidence suggesting that the rocket that hit Poland was from Ukrainian air defenses and had been fired against a barrage of Russian missiles.

"What you heard from me and from the prime minister yesterday regarding the causes of this tragic incident that happened here, I will repeat it once again, according to us and our experts, it was an accident," said the president.

Local Mayor Drewnik has been focusing on dealing with how to maintain an admirable stoic calm among the people in the region.

"The issue is that in the back of everyone's mind is the thought that just like this rocket fell, another rocket could fall too, but this time it could be on their house. And everyone of them could die," said Drewnik.

"Because of this, people are in an unusual situation and suffering from extraordinary trauma. First, time heals all wounds. Second, when things return to being calm, people will eventually forget."

"We are also offering psychological support. All of these things lead us back to normality. We are really tough today."

This village is no longer anonymous after this missile strike, but the people here are determined not to let this incident change how they live their lives and to return to the quiet normality they have always known.