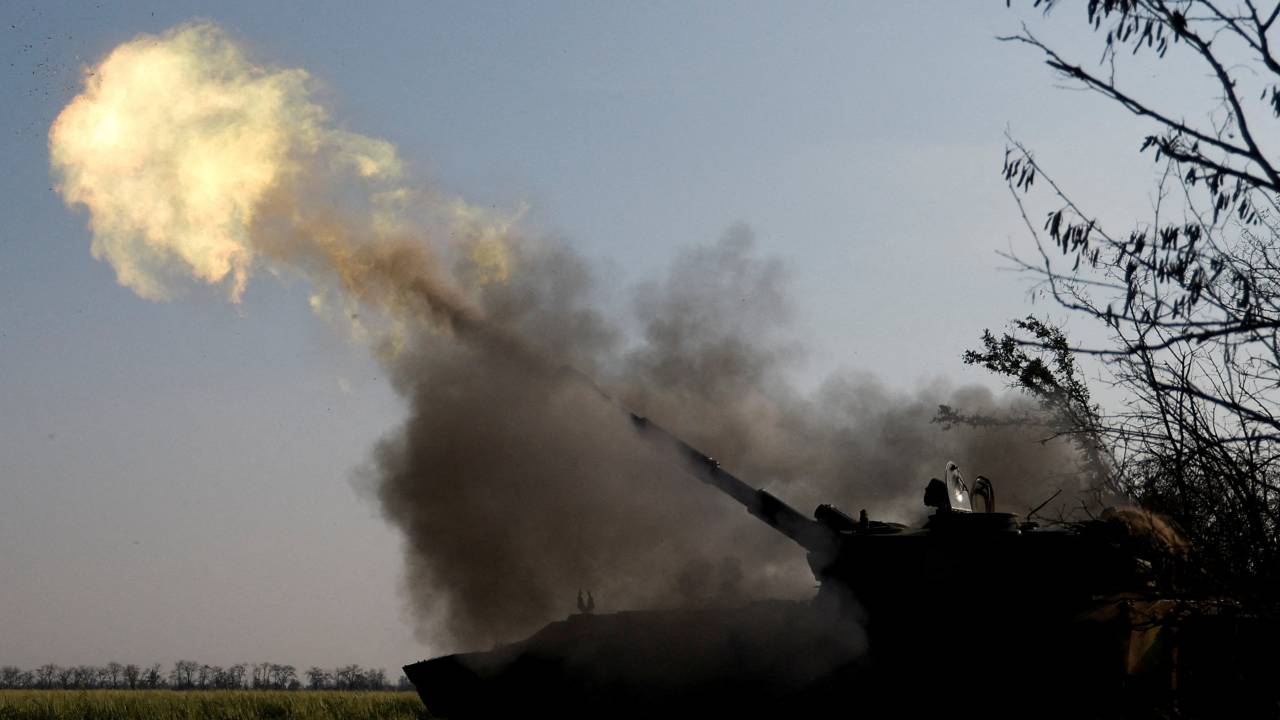 Donetsk's governor has accused Moscow of trying to wipe settlements in the region "off the face of the Earth." /Valentyn Ogirenko/Reuters.

Donetsk's governor has accused Moscow of trying to wipe settlements in the region "off the face of the Earth." /Valentyn Ogirenko/Reuters.

· Heavy Russian shelling continued across large areas of Ukraine on Thursday. The governor of areas of Donetsk still under Ukrainian control said that Moscow's strategy of artillery strikes was to destroy urban areas and "wipe them off the face of the Earth. Nothing else works for them."

· Russia's bombardments are still targeting energy infrastructure, Kyiv said, and have once again disconnected the Zaporizhzhia nuclear power plant from the power grid after damage to the remaining high voltage lines left it running on diesel generators. READ MORE BELOW

· Russia has failed to get the United Nations Security Council to set up a formal inquiry into its accusation that the United States and Ukraine have biological weapons programs in Ukraine, a claim that Washington and Kyiv deny.

· Russia said it would resume its participation in a Ukrainian grain export deal, ending a temporary hold-up of the United Nations (UN) brokered agreement which had raised fears that a global food crisis could return. However, the Kremlin said it had yet to decide if it will extend its participation in the grain deal that expires later this month.

· Ukraine said on Thursday it had made no commitments to Moscow that go beyond the terms of the Black Sea Grain Initiative agreed in July in order to bring Russia back into the fold of the agreement.

· Ukrainian President Volodymyr Zelenskyy said it was important to stand up to "crazy Russian aggression that destabilizes international trade." Kyiv's grain exports are down by nearly 32 percent so far this season, the agriculture ministry data shows.

· Foreign ministers from the G7 group of the world's richest Western-allied nations will discuss how best to coordinate further support for Ukraine when they meet on Thursday in Germany.

· The United States has alleged that DPRK may be secretly supplying Russia with a "significant" number of artillery shells for its campaign in Ukraine.

· Misinformation and hatred against Jewish people has "flourished" online throughout the Ukraine conflict, exacerbating a trend set in motion during the COVID-19 pandemic, according to a new European Union (EU) report. The Fundamental Rights Agency claimed this was partly linked to "the risks of fake narratives, as Russia justified its war by using "terms such as 'Nazi' and 'genocide'" to describe the government in Ukraine. Zaporizhzhia nuclear power plant has once again been disconnected from the grid amid shelling. /Alexander Ermochenko/Reuters

Zaporizhzhia nuclear power plant has once again been disconnected from the grid amid shelling. /Alexander Ermochenko/Reuters

The plant, under Russian control but run by Ukrainian workers, has 15 days' worth of fuel to run its diesel generators, the firm added.

Russian Security Council Secretary Nikolai Patrushev, a close ally of President Vladimir Putin, said on Thursday that in fact Moscow had stopped a Ukrainian "terrorist attack" on the plant.

He went on to claim that Ukrainian forces "continue to shell the Zaporizhzhia nuclear power plant with Western weapons which could lead to a global catastrophe."

The International Atomic Energy Agency, which has repeatedly voiced concerns over such shelling, has proposed the establishment of a nuclear safety and security protection zone around the plant.

Both Moscow and Kyiv have denied the others claims that they are targeting the volatile site.

Russia has admitted it is specifically targeting infrastructure in Ukraine. As a result, Ukrainian civilians have been experiencing power cuts and reduced water supplies in recent weeks.

The regions of Zaporizhzhia and Dnipropetrovsk are both Ukrainian steelmaking hubs, making Ukraine's economy heavily reliant on getting energy to these areas. Russian strikes have damaged 40 percent of Ukraine's energy infrastructure, President Volodymyr Zelenskyy has said.