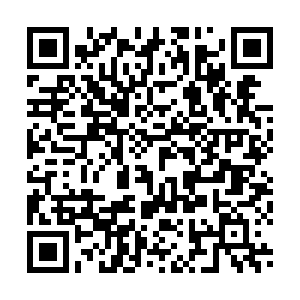 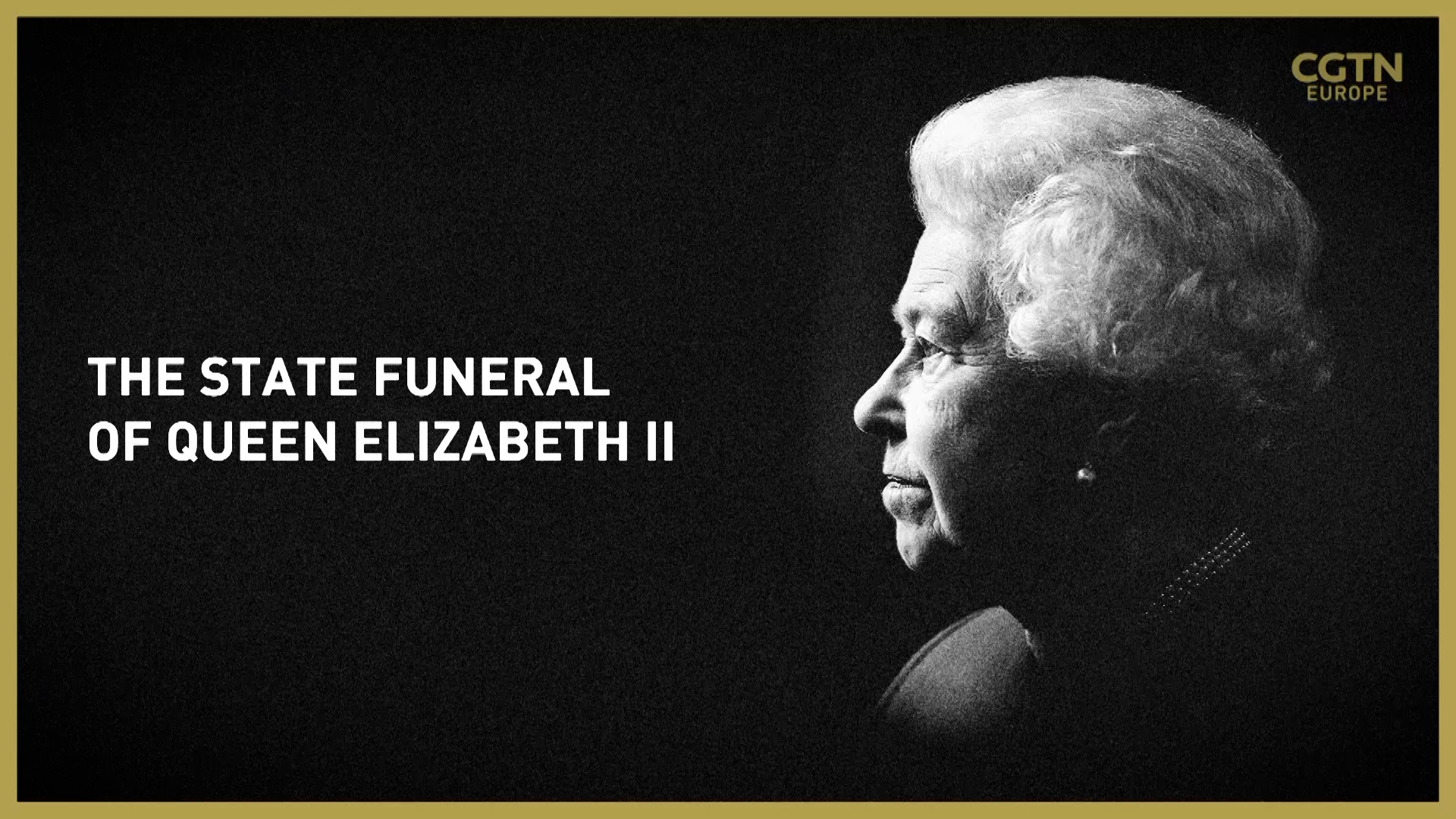 Tens of thousands of people lined the streets of London for the state funeral of Queen Elizabeth II while billions around the world watched the televised event. The longest-reigning monarch in UK history passed away at the age of 96 on September 8 at her summer residence in Scotland.

To the tune of pipes and drums, the gun carriage -- used at every state funeral since Queen Victoria's in 1901 -- was then drawn by 142 junior enlisted sailors in the Royal Navy to Westminster Abbey.

The thousand-year-old church's tenor bell tolled 96 times at one-minute intervals -- one for every year of her life - stopping a minute before the service began at 11:00 a.m. (1000 GMT). 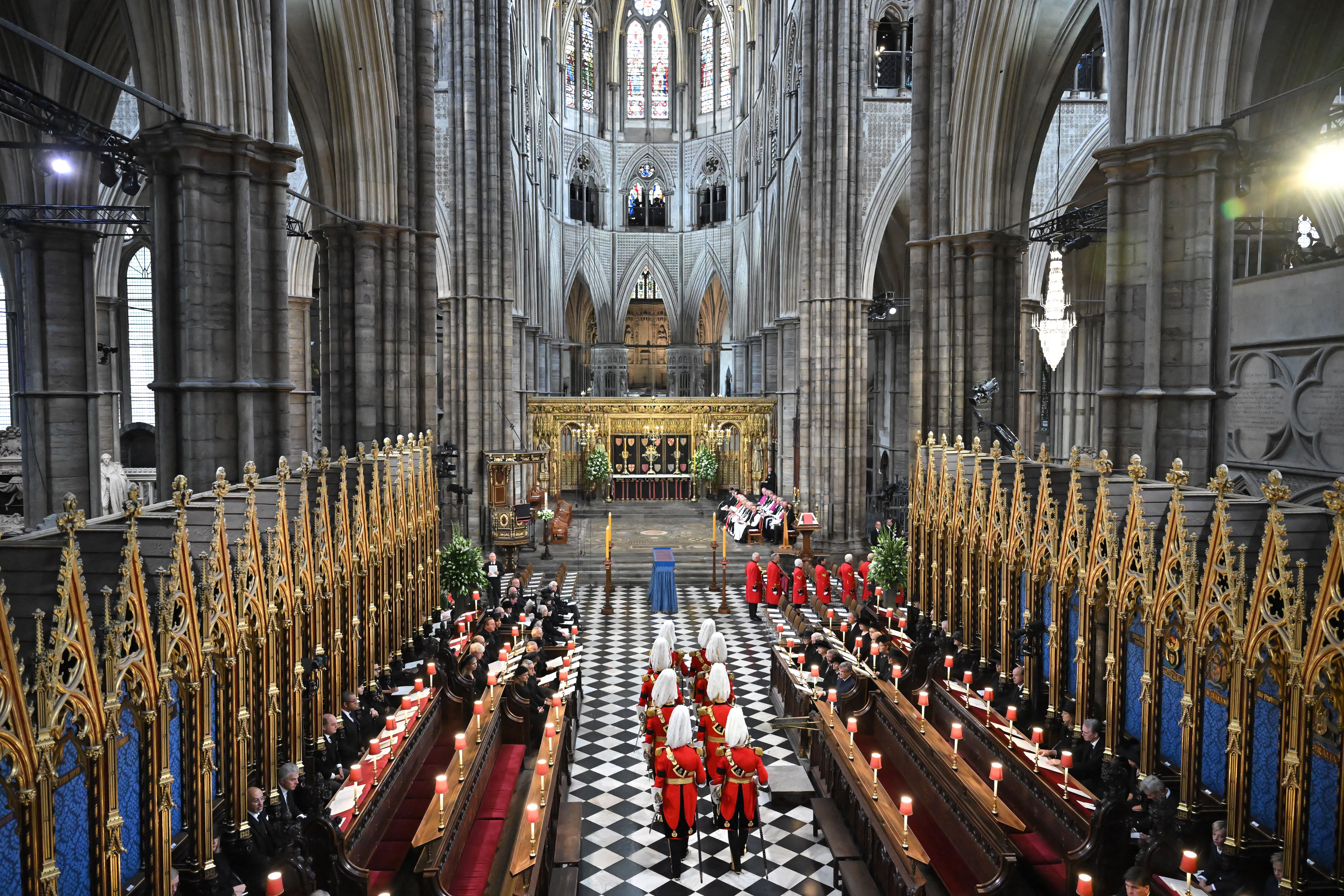 Leaders from around the world attended the funeral of Queen Elizabeth ll at Westminster Abbey. Ben Stansall / AFP

Leaders from around the world attended the funeral of Queen Elizabeth ll at Westminster Abbey. Ben Stansall / AFP

Charles's eldest son Prince William accompanied them alongside his brother, Prince Harry, and other senior royals.

William's two eldest children, George and Charlotte, who are next in line to the throne, also walked behind the coffin inside the abbey.

The Queen was married and crowned in Westminster Abbey. In death, she entered and departed the thousand-year-old church to the same words of prayer: "May God grant to the living, grace; to the departed, rest."

The words are engraved on a stone slab next to the Great West Door through which Elizabeth's coffin was borne for Monday's Anglican funeral service, attended by leaders of all faiths from around the world.

They were the same words intoned by the dean of the abbey, David Hoyle - part of the final blessing concluding the hour-long service, before trumpeters sounded the Cavalry Last Post.

Then followed a two-minute silence in the abbey and throughout the new kingdom of the late monarch's eldest son, now Charles III.

The ceremony closed with the national anthem, "God Save the King", symbolising the transition from one reign to another, and a lone piper playing the Scottish lament "Sleep, dearie, sleep." 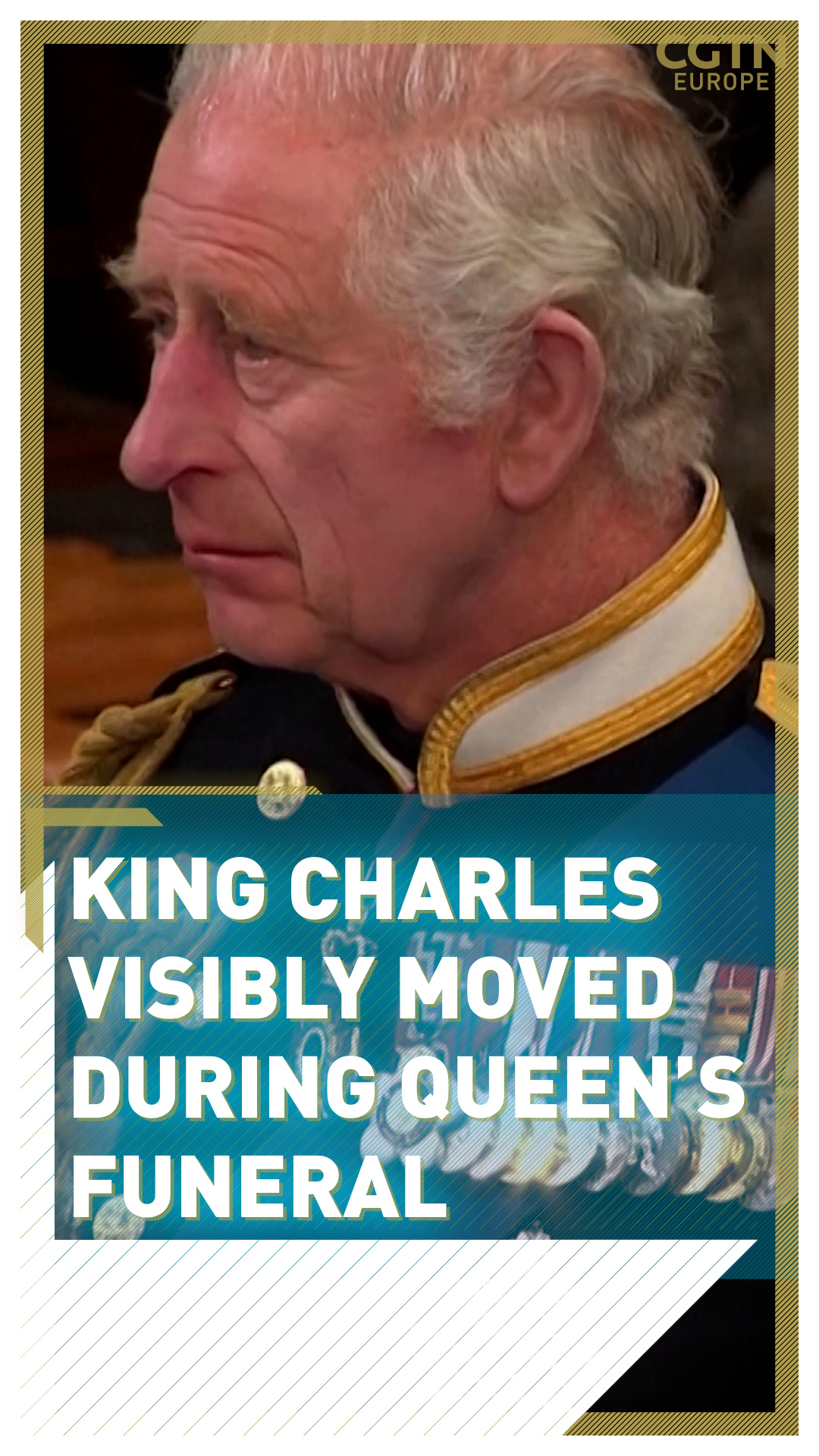 Archbishop of Canterbury Justin Welby praised the Queen's life of duty and service to the UK and Commonwealth during the eulogy.

The archbishop also noted words the Queen used in a broadcast when Britain went into lockdown at the start of the Covid pandemic, plunging millions into anxious isolation.

She in turn had drawn on a famous World War II song by much-loved singer Vera Lynn: "We will meet again."

"Service in life, hope in death," Welby intoned. "All who follow the Queen's example, and inspiration of trust and faith in God, can with her say: 'We will meet again'."

The service included New Testament readings by Commonwealth secretary-general Patricia Scotland and by Liz Truss - who was appointed by the Queen as her 15th prime minister only two days before she passed away.

As the coffin was borne out, the abbey organist played a sonata allegro movement by Edward Elgar - part of a musical programme drawing heavily on English composers that was selected by the Queen herself, along with the hymns and prayers.

The long procession filed past Downing Street, government buildings in Whitehall, through Horse Guards Parade and up The Mall, the tree-lined avenue that leads to Buckingham Palace decked out in red, white and blue. 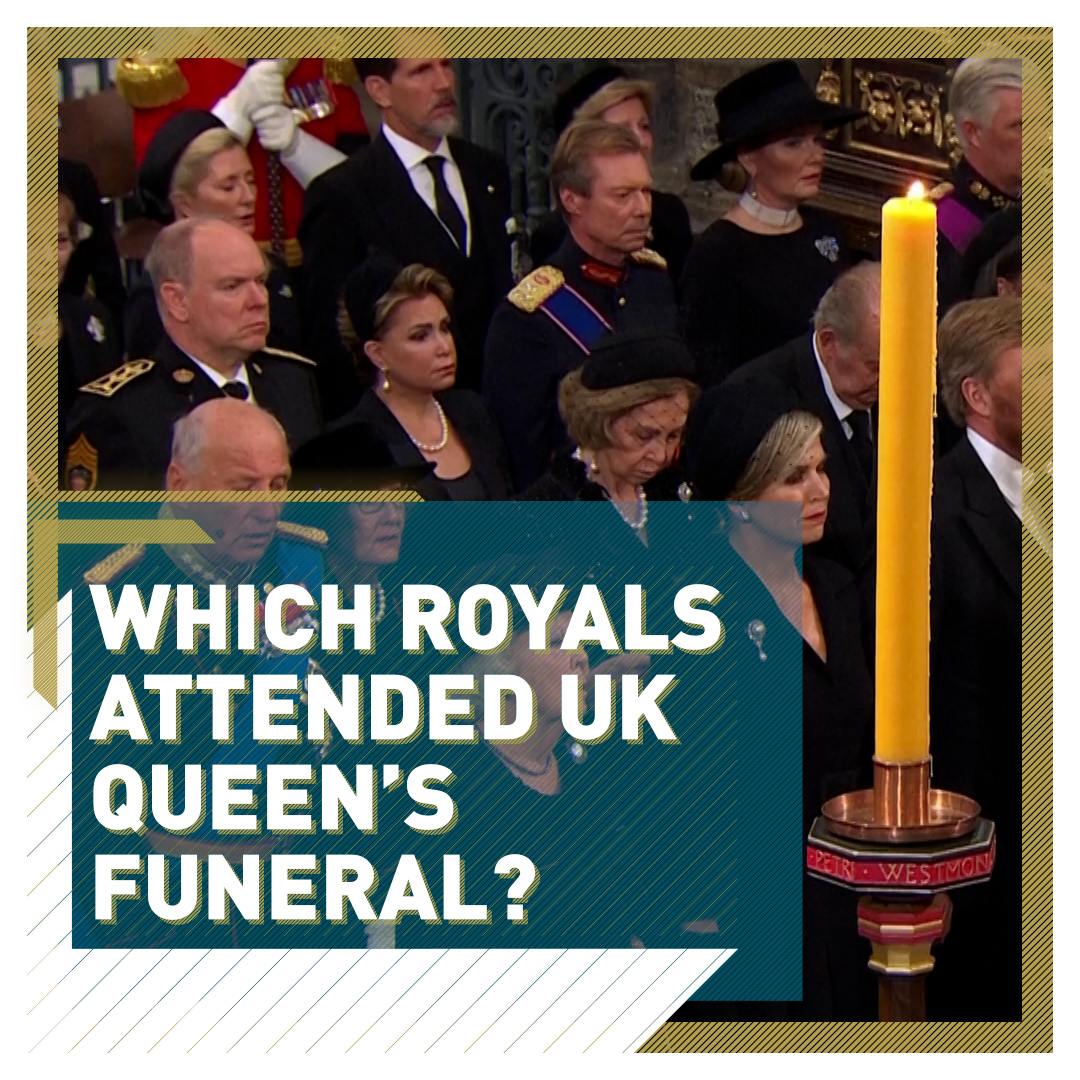 At nearby Wellington Arch, 6,000 members of the armed forces who had marched in hypnotic lockstep halted and the coffin was transferred to the royal hearse.

Charles saluted and the national anthem played again before the hearse headed by road to Windsor Castle.

The Queen will be buried alongside her father king George VI, her mother queen Elizabeth and sister princess Margaret, reuniting in death the family who once called themselves "us four".

The coffin of her husband, Prince Philip, who died last year aged 99, will also be transferred to lie alongside her. 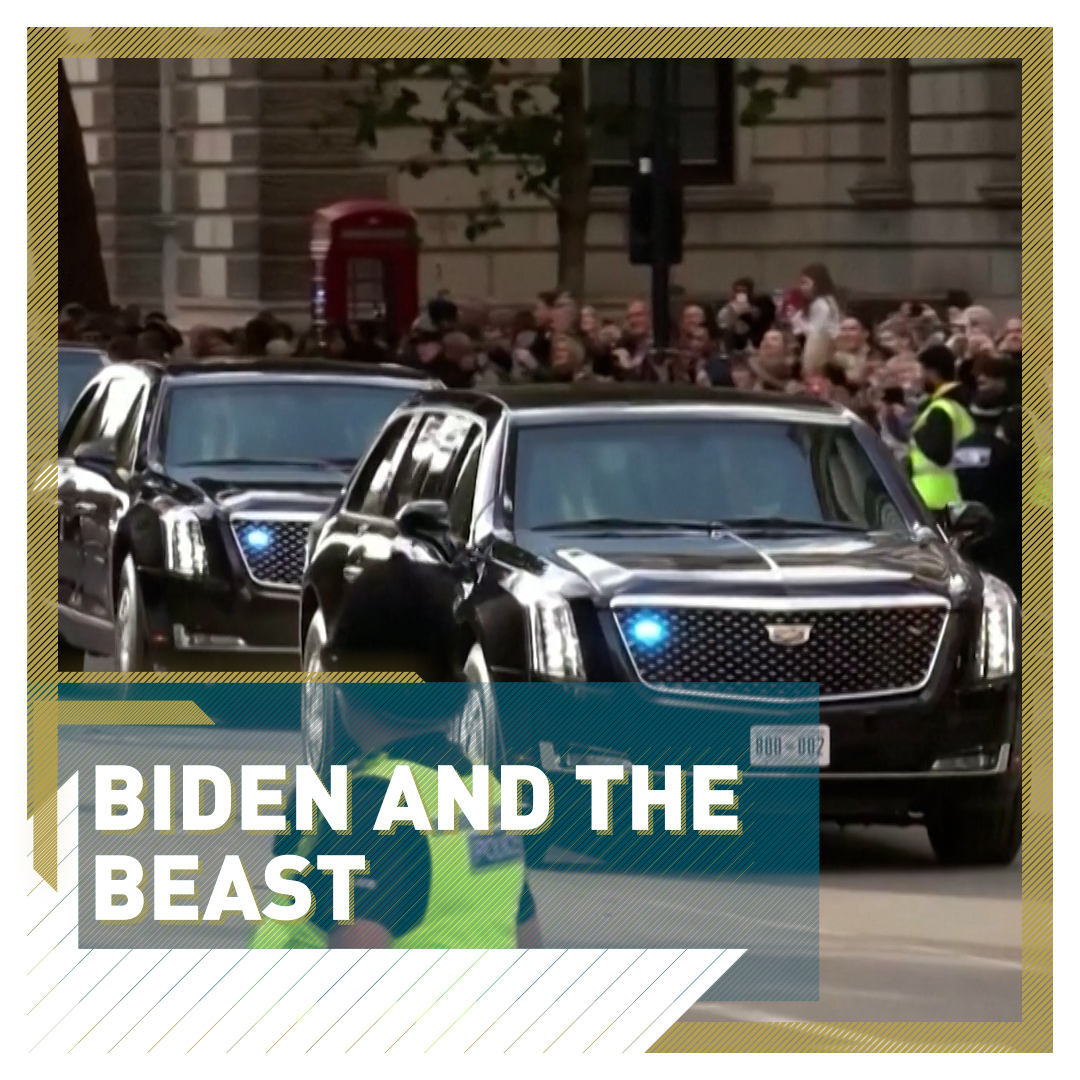 More than 10,000 police officers were on duty in the capital, drawing on reinforcements from all of the UK's 43 police forces.

Police spotters on rooftops, sniffer dogs on the streets and marine officers on the River Thames. 36 kilometers of barriers have been set up in central London to control the crowds. Drains, phone boxes and rubbish bins have been searched by hand and flying drones over central London has been temporarily banned.

U.S. President Joe Biden arrived separately at Westminster Abbey to other dignitaries who came by a specially arranged bus. He and his wife Jill came in the heavily armoured limousine that has been nicknamed "the beast".

Ahead of the funeral on Sunday, Biden paid tribute to the Queen and talked of her "legacy" for the UK and the world.

He tweeted: "Today Jill and I signed the Official Condolence Book for Her Majesty Queen Elizabeth II. We first met the Queen in 1982, and will always remember her kindness and hospitality. Her legacy will loom large in the pages of British history, and in the story of our world."

Ahead of the funeral French President Emmanuel Macron posted a touching video on Twitter of the Queen's meeting with French leaders down the years with the simple message: "Thank you your Majesty."