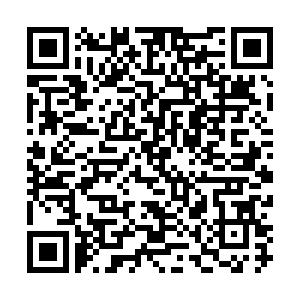 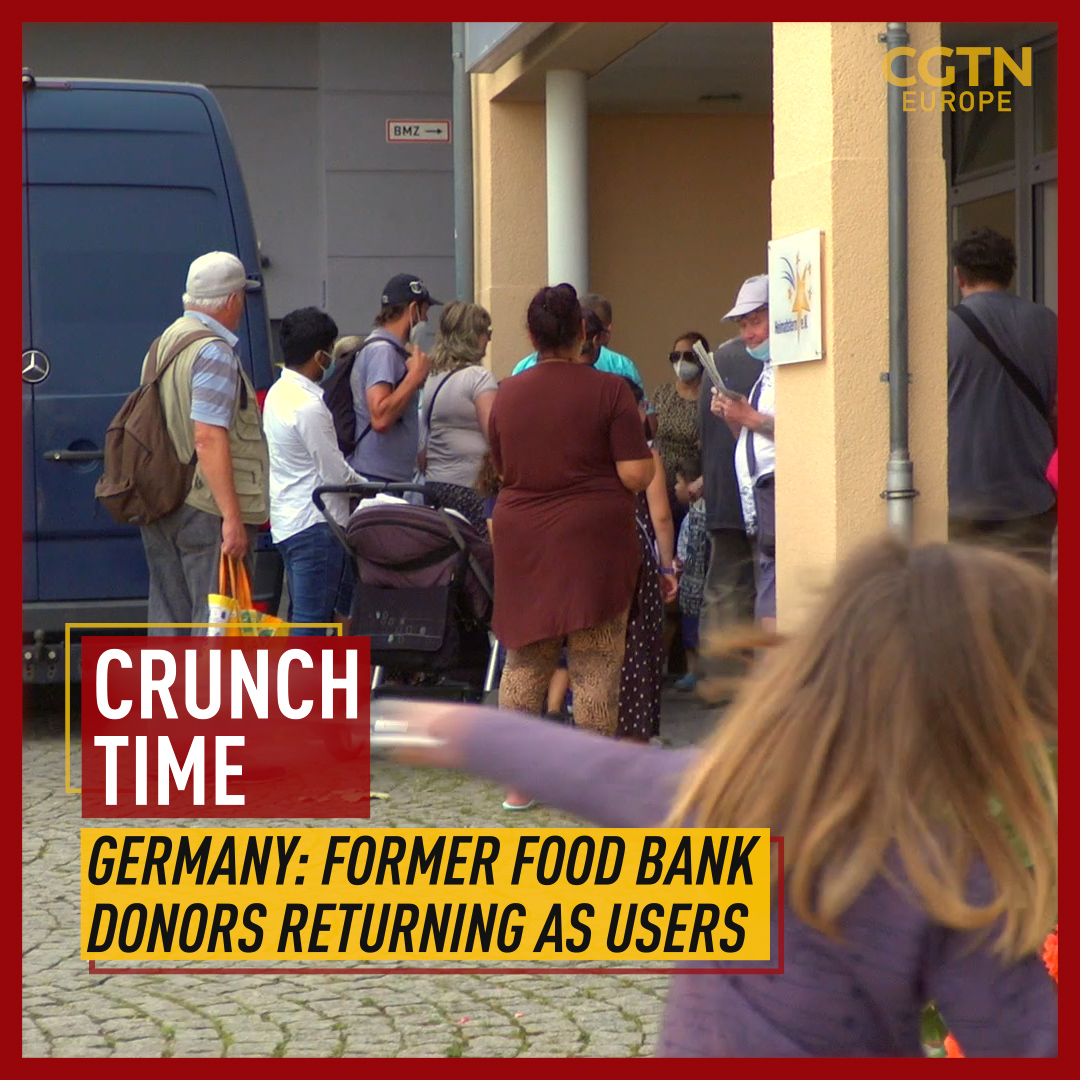 Sertap only began coming to the Heimatstern food bank in Munich after she lost her job during COVID-19. With a big family to feed, no income and rising prices, the 36-year-old had nowhere else to turn.

"In today's times, there is no money, but everything is very expensive," she says, "especially when there is a big family, it is very difficult."

Her story is not unique. CGTN also spoke with a German man who had a six-figure salary until, like Sertap, he too lost his job due to cutbacks during the pandemic.

"Social benefits are very small and not enough for everything," says Ukrainian refugee Yulia, while 70-year-old Cristine from Romania says, "I would like to work but they tell me I'm too old."

The cost of living has risen all over the world due to the rising cost of energy. Germany is suffering inflationary rates not seen in the past 40 years, forcing many people to change the way they live.

Rosemarie, a 64-year-old retiree, simply can't get through the week just on her basic pension anymore. "I don't get much money, that's why I come here," she says. "Everything has become more expensive so yes, I always look to see where it is cheaper."

At Heimatstern, organizers tell CGTN that more people have registered in the last six months than over the past two years. 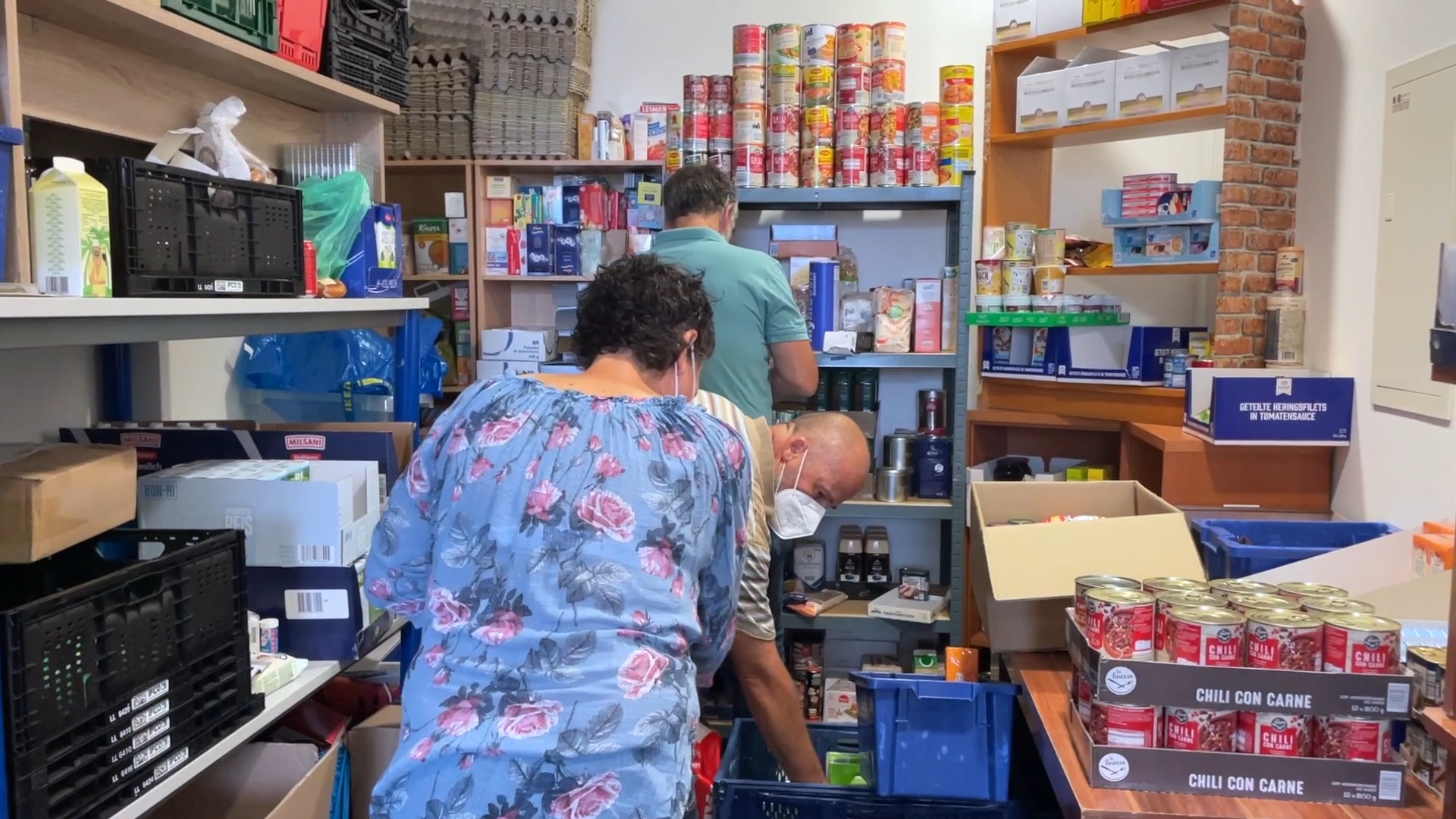 Food bank use is on the rise. /CGTN

Food bank use is on the rise. /CGTN

"People who used to be on the other side donating and helping us are now coming and asking for help," says Petra Lehmann, who heads the Heimatstern association. "We have lots of families now where it's impossible from one income to feed the family because it's so expensive."

This is also changing people's behaviors. "We buy more jars of cheap food," says Sertap. "It may be chicken. It could be fish, beans because they are more suitable for us."

Pensioner Katrin Obermeier has started rationing her food: "I'm using foods longer, especially past the expiration date because it is still well preserved."

She shows us her food takeaway – a bag of noodles, a tomato, some bananas, a yogurt and a small jar of instant coffee. Asked how long it will last, she estimates two to three weeks.

What's most concerning for Heimatstern chief Lehmann is that the increasing prices are decreasing donations – as supermarkets, individuals and even other food banks simply have less to give away.

"We do have a problem in getting all the food because everybody has more people now," she says. "The Munich food bank also has a problem in having enough for their deliveries and so that's the problem. We really do need more donations at the moment. We are just trying to make it from Friday to Friday."

Indeed, she has witnessed some families who used to donate not just stopping their input, but humbly asking to take some back. "We had donors who were giving money for years saying 'I'm sorry, I can't give you any more – on the contrary, I would like to pick up some food because I can't make ends meet.'

"People who used to be on the other side, donating and helping us, are now coming and asking for help."

To help ease these economic challenges, the German government has implemented a number of support policies totalling over $30 billion, but many argue that financial support is not getting to those most in need.

"The current relief packages do not sufficiently protect people with low incomes," says Marcel Fratzscher of Deutsches Institut fur Wirtschaftsforschung, one of Germany's leading economic research institutes. He insists support measures "should be clever-clever in the sense that financial transfers, giving people money, is a much better measure than making certain things cheaper."

Germany is currently waiving a surcharge on electricity, radically discounting public-transport tickets and providing one-off payments of 100 euros per child and 300 euros for each income-tax payer.

Due to the high demand and low supply, a third of food banks across Germany have now frozen all new registrations.