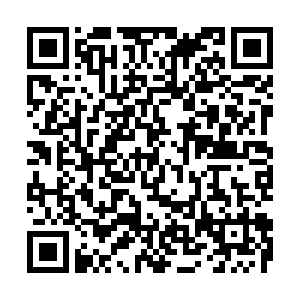 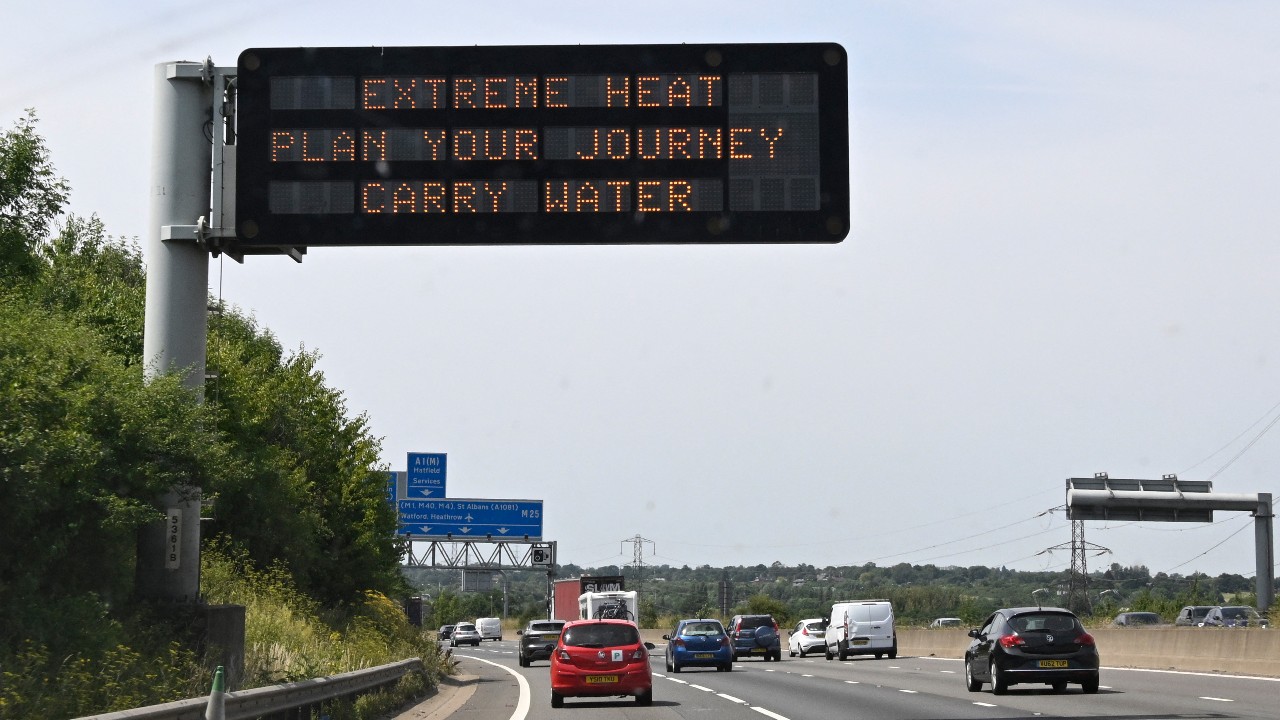 Britain was on course for its hottest day ever on Monday with temperatures forecast to hit 40 degrees Celsius for the first time, forcing train companies to cancel services, schools to close early and ministers to urge the public to stay at home.

Much of Europe is baking in a heatwave that has pushed temperatures into the mid-40s Celsius in some regions, with wildfires raging across tinder-dry countryside in Portugal, Spain and France.

The UK government triggered a "national emergency" alert as temperatures were forecast to surpass the existing record of 38.7 degrees Celsius. "We've got a difficult 48 hours coming," said Kit Malthouse, a minister in charge of government coordination.

With ambulance services predicting a 20 percent rise in callouts, the National Health Service confederation CEO Matthew Taylor said "It feels like a midwinter crisis in the middle of July."

London's metro network urged commuters to only travel if essential on Monday and Tuesday, imposing temporary speed restrictions, causing a reduced service with journeys taking longer than normal. The national rail network also urged passengers to stay at home and warned some services would not run on Tuesday. 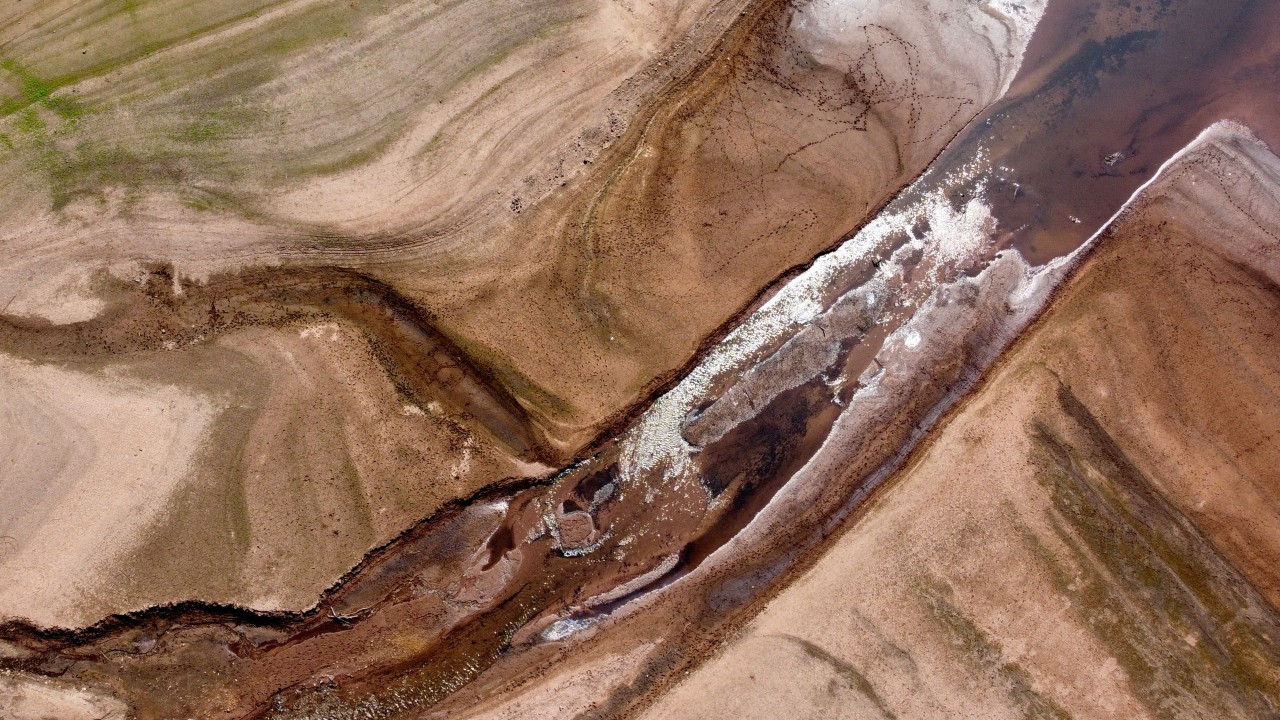 A view of the dried bed of Llwyn-on Reservoir in Wales. /Carl Recine/Reuters

A view of the dried bed of Llwyn-on Reservoir in Wales. /Carl Recine/Reuters

The government urged schools to stay open but many were due to close earlier than usual, normal uniform demands were ditched and end-of-term sports days were canceled. Some schools were shut, resorting to lockdown-style online lessons.

The UK Health Security Agency raised the heat health warning to Level 4 for England for Monday and Tuesday. Britain's Meteorological Office defines a Level 4 alert as a national emergency, to be used when "illness and death may occur among the fit and healthy, and not just in high-risk groups."

The Met Office said "substantial" changes in working practices and daily routines would be required, and there was a high risk of failure of heat-sensitive systems and equipment, potentially leading to localized loss of power, water or mobile phone services. 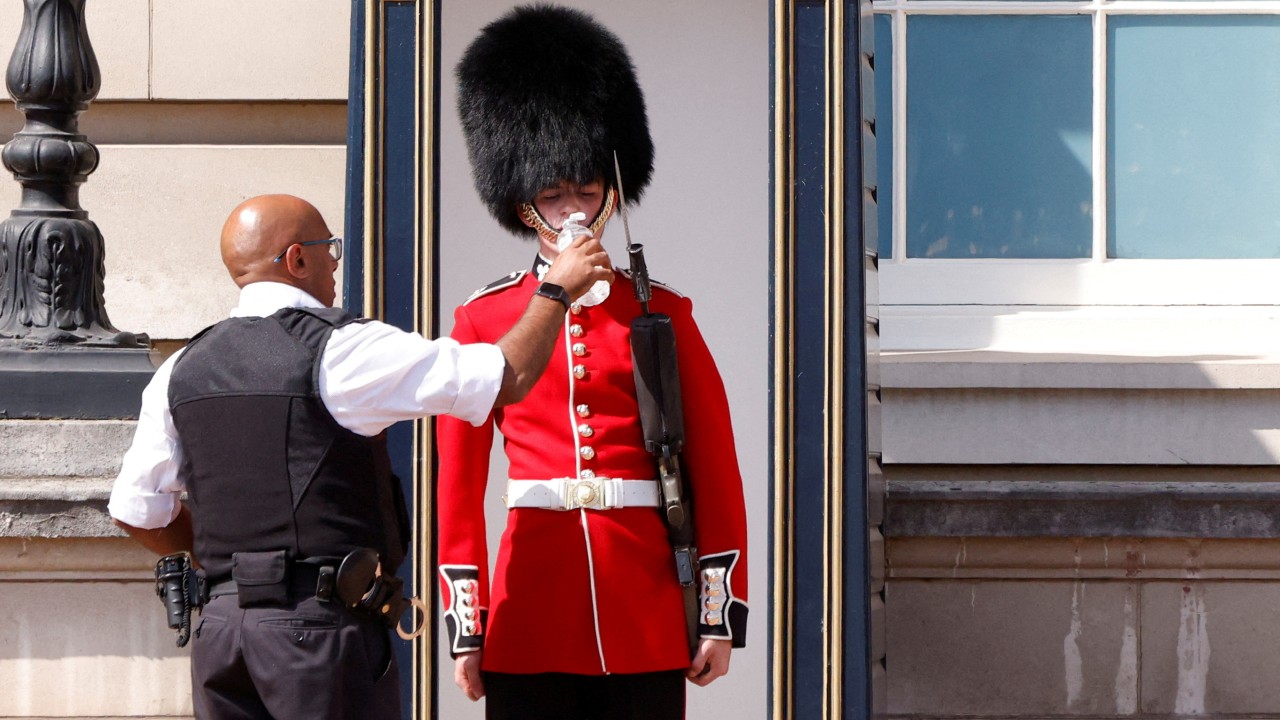 A member of the Queen's Guard is given water outside Buckingham Palace in London. /John Sibley/Reuters

A member of the Queen's Guard is given water outside Buckingham Palace in London. /John Sibley/Reuters

The threat to the UK came as a heatwave which has been sweeping southern Europe, causing hundreds of deaths and huge wildfires, moved north.

Temperatures in some parts of southern Europe began to ease over the weekend but thousands of firefighters across the region still battled to contain hundreds of wildfires and authorities said the risk of further blazes remained extremely high.

Spain was facing the eighth day of a heatwave which has caused more than 510 heat-related deaths, according to estimates from the Carlos III Health Institute.

With fires burning thousands of hectares in Galicia, Castille and Leon, Catalonia, Extremadura and Andalusia, almost the entire country faces an extreme fire risk. More than 70,000 hectares have burnt in Spain so far this year, the worst year of the last decade, according to official data. Last month, a huge wildfire in Sierra de la Culebra, Castille and Leon, ravaged about 30,000 hectares of land. 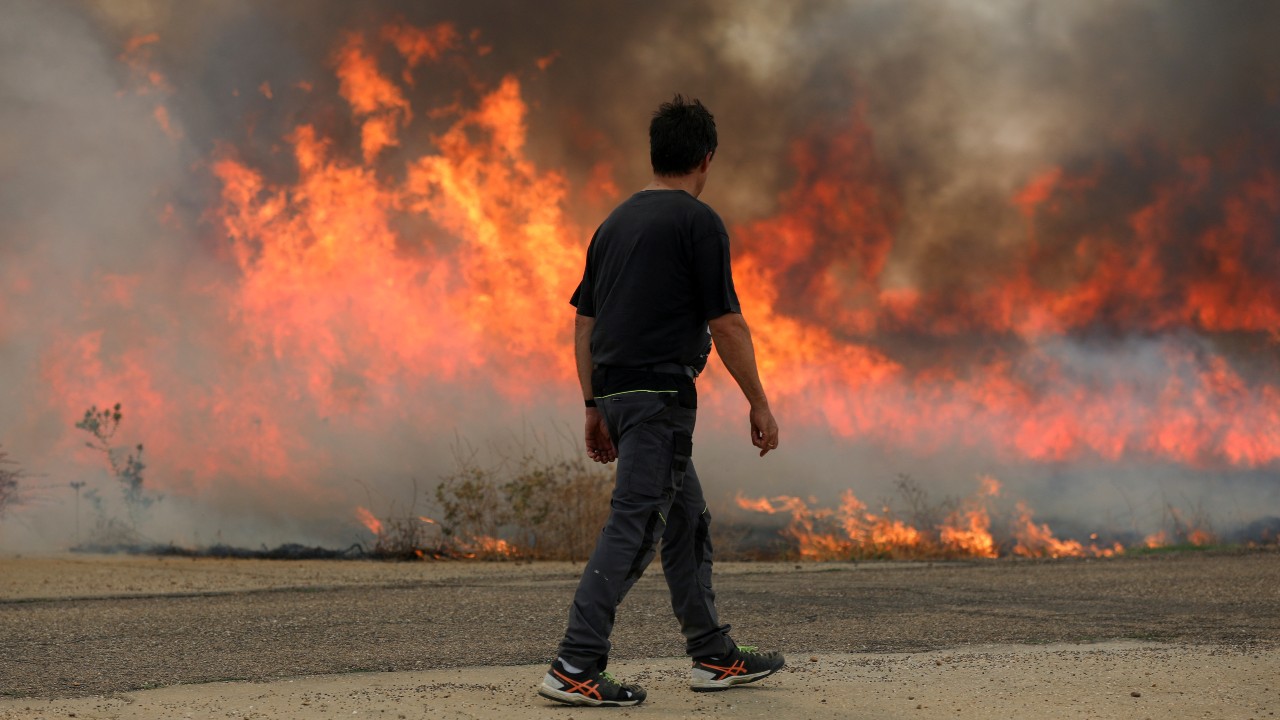 A fire burns between Tabara and Losacio in Zamora, Spain. /Isabel Infantes/Reuters

A fire burns between Tabara and Losacio in Zamora, Spain. /Isabel Infantes/Reuters

Even at night, there has been no respite. Saturday night was Madrid's fifth consecutive "torrid night" on which temperatures remain above 25 degrees Celsius. The previous record stood at three nights. A State Meteorological Agency spokesman said that of the 27 torrid nights recorded in the past century, 15 were since 2012.

In Portugal, temperatures dropped over the weekend, but the risk of wildfires remained very high across most of the country, according to the Portuguese Institute of Meteorology. More than 1,000 firefighters, backed by 285 vehicles and 14 aircraft, were battling nine ongoing wildfires, mainly in the country's northern regions, authorities said. 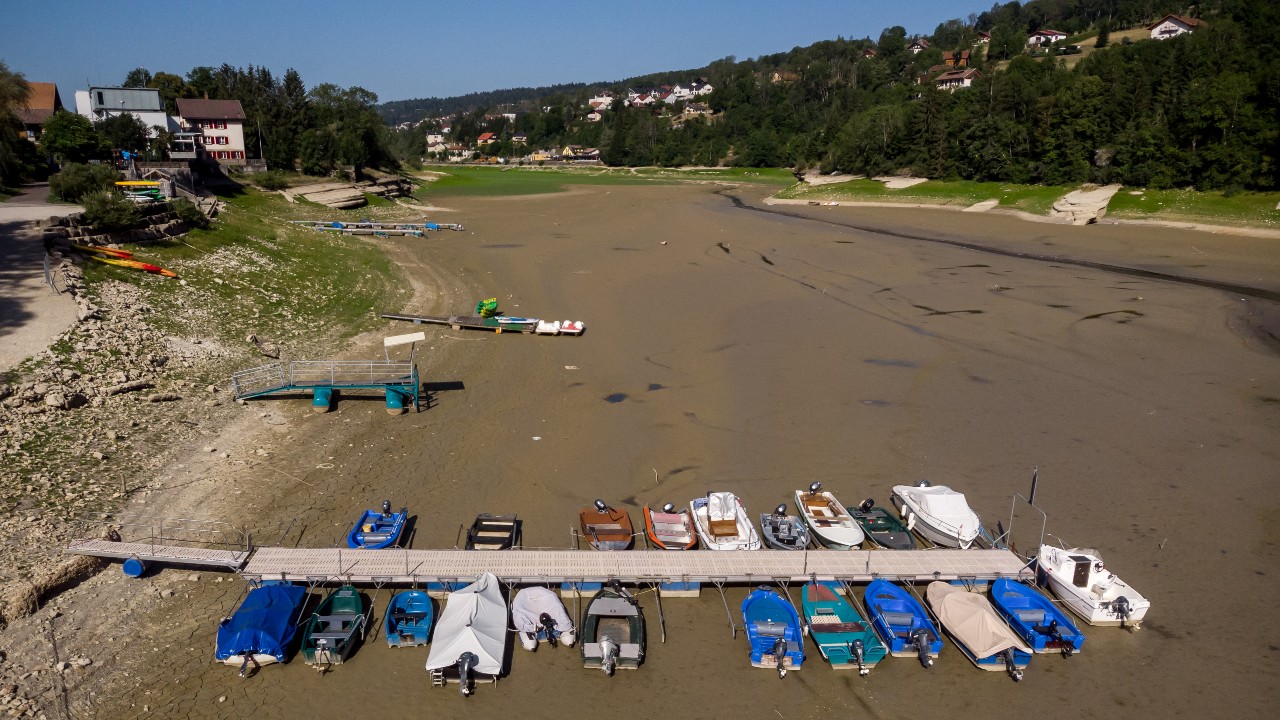 Boats in the dried-out bed of the Lac des Brenets, a natural border between France and Switzerland. /Fabrice Coffrini/AFP

Boats in the dried-out bed of the Lac des Brenets, a natural border between France and Switzerland. /Fabrice Coffrini/AFP

Portugal's Health Ministry said late on Saturday that in the last seven days 659 people died due to the heatwave, most of them elderly. It said the weekly peak of 440 deaths was on Thursday, when temperatures exceeded 40 degrees Celsius in several regions and 47 degrees Celsius at a meteorological station in the district of Vizeu in the center of the country.

In France, wildfires had spread over 11,000 hectares in the southwestern region of Gironde, and more than 14,000 people have been evacuated, regional authorities said on Sunday afternoon. More than 1,200 firefighters were trying to control the blazes, the authorities said in a statement. 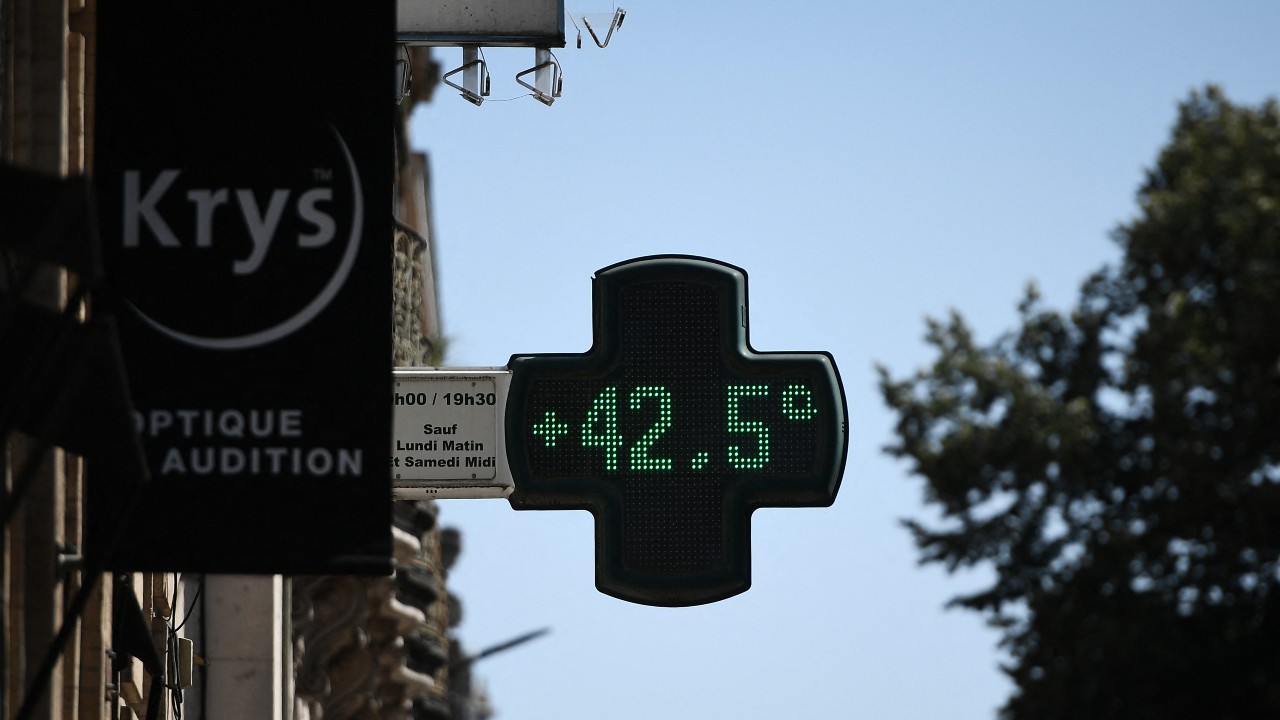 In Greece the fire brigade said on Saturday 71 blazes had broken out within a 24-hour period.

In Italy, where smaller fires have blazed in recent days, forecasters expect temperatures above 40 degrees Celsius in several regions in coming days. Belgium and Germany are among the other countries bracing for the effects of the heatwave.

In Switzerland, the operator of the Beznau nuclear plant said it was forced to reduce output so that it does not overheat the Aare river from which it draws its cooling water.

Almost half of EU at drought risk

Meanwhile, researchers at the European Commission warned on Monday that nearly half of the EU's territory is currently at risk of drought. In its report for July, the Commission's Joint Research Centre said that 46 percent of the EU's territory was exposed to warning-level drought, with 11 percent at an alert level, with crops already suffering from the lack of water.

Italy was the hardest hit, with the Po River basin in the north of the country facing the highest level possible of drought severity, the EU said. 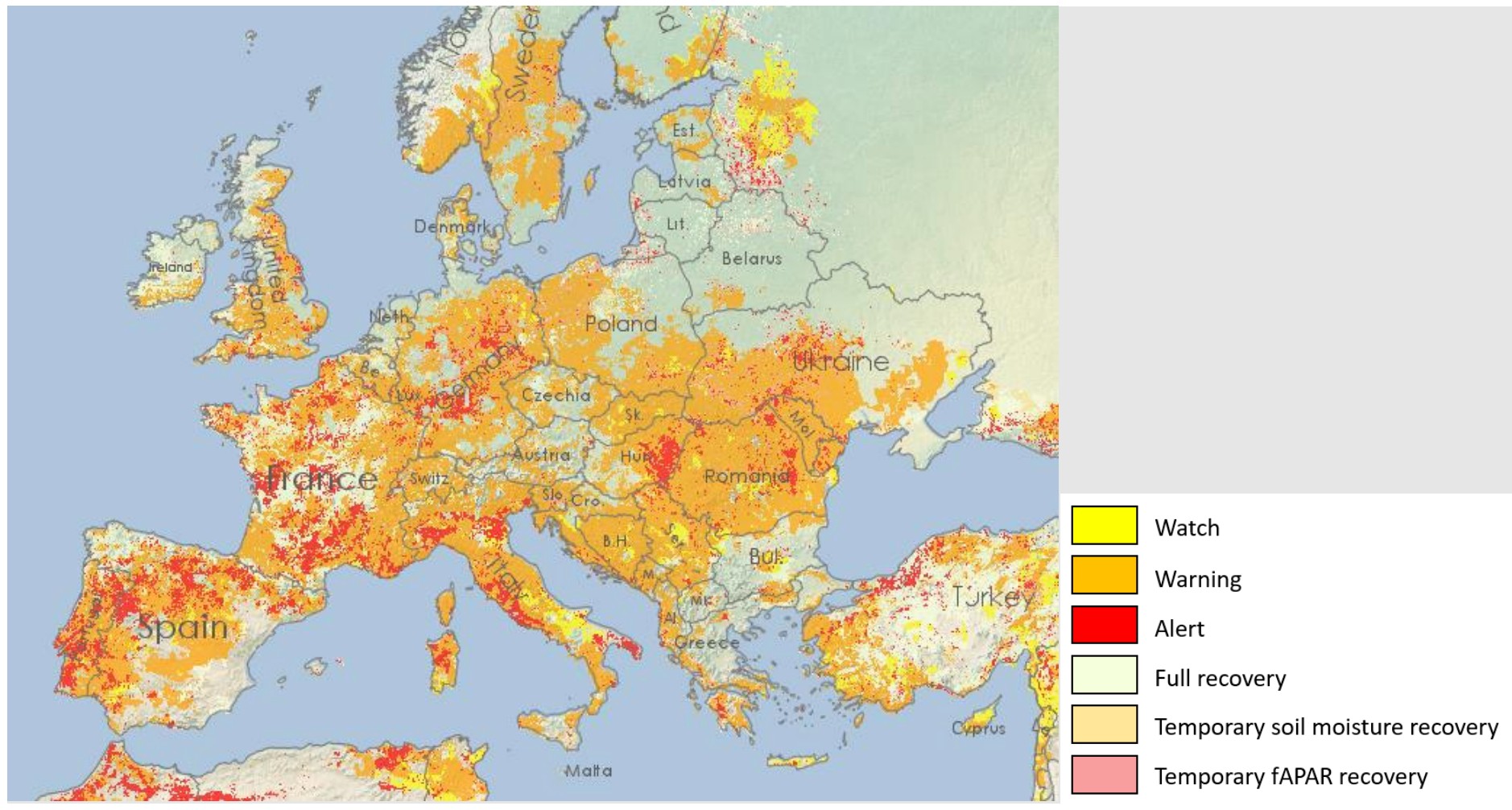 In Spain, water reservoir volumes are currently 31 percent lower than the 10-year average, the report said, while in Portugal, water to produce hydroelectric energy is at half the average of the previous seven years.

The EU researchers also warned that the lack of water and strong heat are driving crop yields lower in France, Romania, Spain, Portugal and Italy.

Weather forecasts predict more of the same, the report said, adding to an already "very critical situation" that will exacerbate the effects on agriculture, energy and water supply.