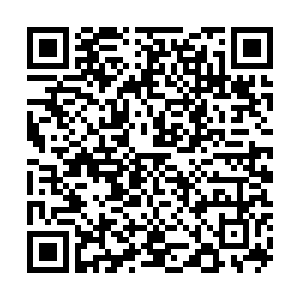 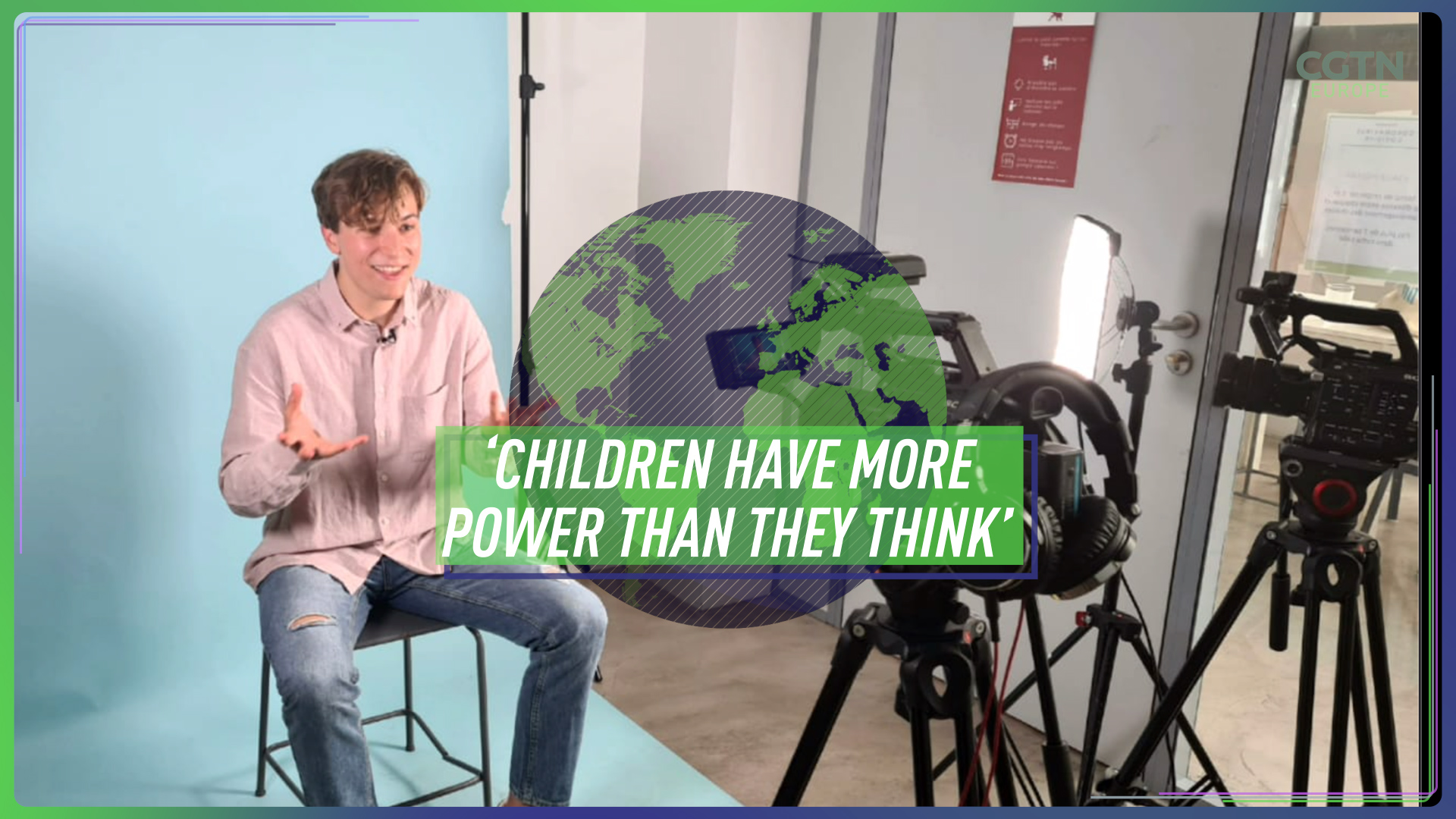 Fionn Ferreira was exploring the coast near his native West Cork, Ireland when he first realized something was deeply wrong with the world around him.

From early childhood, Ferreira's first love was nature. The weather in the region was inclement and affected excursions, but any day it didn't rain, he was outdoors - hiking, kayaking and sailing.

It was on one of these days that Ferreira realized the extent of the pollution in his local environment. While he and his dog India walked along the beach, the tide continually deposited plastic waste on the shore.

What you should know about Ferreira is that he's the kind of person who seeks solutions and jumps into action. And with that spirit, he endeavored to find a solution - and the answer seemed simple.

"For me, pollution looked like such a simple issue, in the sense that it's something that is man-made and where we know the source, or at least vaguely know the source," he said. 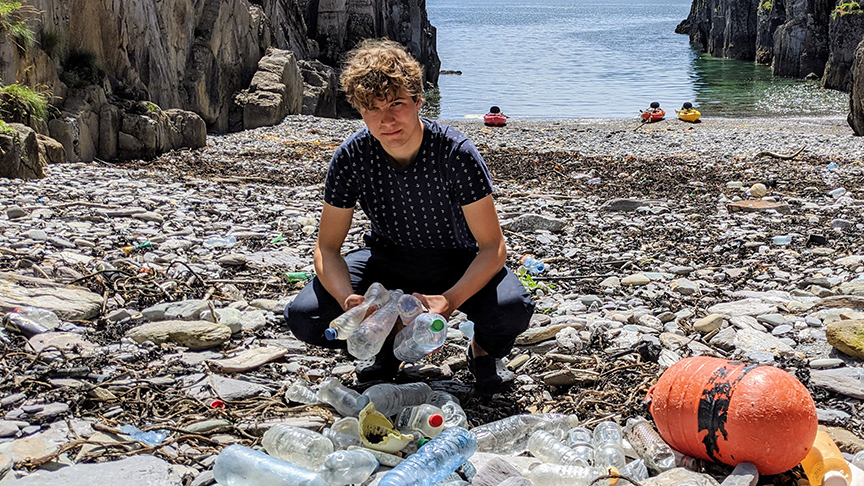 Some 350 million tons of plastic waste are produced every year, with an estimated 12.7 million tons ending up in our oceans. /Fionn Ferreira

Some 350 million tons of plastic waste are produced every year, with an estimated 12.7 million tons ending up in our oceans. /Fionn Ferreira

So he started counting the amount of plastic he collected, organizing beach cleanings that gathered support from the local community.

"I kind of got a moment and I said, well, it's not really a problem if there's big plastic on the shore, right? It's just big, it's benign - that was my thought at the time," he says.

"It just lies there. It doesn't look nice, that's why I collect it. But it's not harming anybody. But I was so wrong because that big plastic is under the influence of constant sunlight and wind and being thrown against the rocks, which causes it to become brittle and break down into a dust, microplastics dust, super tiny plastic particles, which were then getting into the oceans and the waters."

Things were so much worse than Ferreira had initially sensed, but he still wanted to do something about it. A task that isn't easy, he explains, "when you live in the middle of nowhere, like literally out in the sticks, as the Irish people call it."

Ferreira didn't have the opportunity to go to a high-tech lab to monitor the microplastics on West Cork's coastline, so he built his own spectrometer - out of Lego, the same plastic bricks he used to play with on rainy days when he was little.

"I built a box out of Lego and that resulted in me looking at light sensors and finding microplastics in water," he explains.  "Actually, at first, I thought my spectrometer had an error or an issue because it was getting really high readings of plastics. But I started noticing that this was not an issue with the spectrometer, this was actually plastic that was found inside the water.

"That's when I really realized there was a big problem. I thought, what if I could invent or try out some ideas, see if I could do something about it." 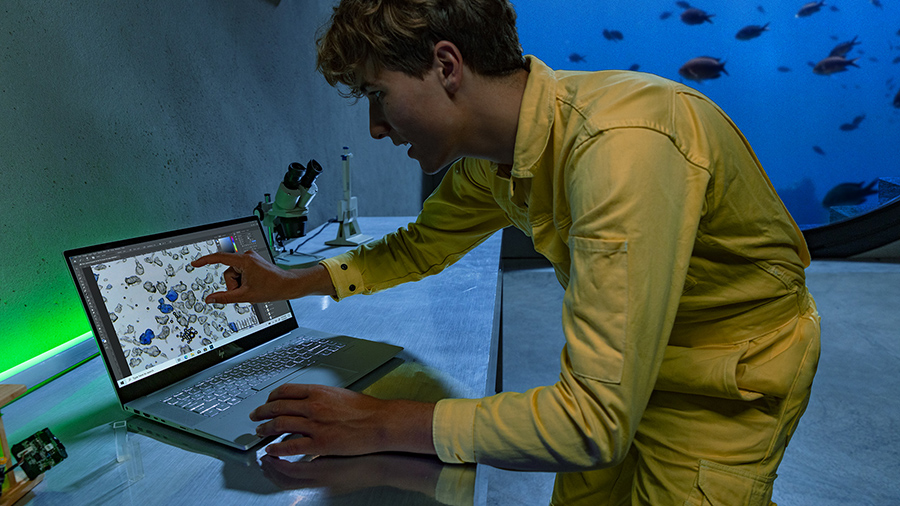 Up to 75 percent of marine litter is plastic, which represents a threat to marine life and people through the leaching of chemicals and degradation of it into microplastics. /Fionn Ferreira

Up to 75 percent of marine litter is plastic, which represents a threat to marine life and people through the leaching of chemicals and degradation of it into microplastics. /Fionn Ferreira

Ferreira decided to take the situation into his own hands once again, and in doing so, he invented a magnet that could collect microplastics right out of the water.

The invention works on the basis that when oil and plastic mix in water, plastic sticks to oil. So he thought of making that oil magnetic - using iron oxide, one of the most common minerals in the Earth's crust, and therefore not harmful when spread in the sea.

The mixture of oil and magnetite powder attracts microplastics, and then a magnet can remove them from water.

"Of course, this raises the final question, what do you do with this gunk that comes out?" he told CGTN. "I can actually separate it again using what I used to take it from the water. If I put a really strong magnetic field, I can separate the different elements so the plastic can be disposed of in a safe way." Microplastics are pieces of plastic less than 5mm in length. /Fionn Ferreira

Microplastics are pieces of plastic less than 5mm in length. /Fionn Ferreira

Ferreira was only eighteen, yet his discovery won him the Google Science Fair award in 2019.

"I think we're at a wonderful time at the moment where the scientific community is seriously taking into account the voices of youth and young inventors," he says.

Fionn, now 20 years old and a chemistry student at the University of Groningen in the Netherlands, is trying to scale production and commercialize his invention in the next two years.

"My startup (company) is developing a device like this that can be used in your home to treat the water that you're going to drink," Fionn says.

Research has found that people consume 5 grams of microplastics every week - the equivalent of eating a credit card. In a year, that number goes up to 250 grams of plastics ingested through contaminated water and food.

Ferreira has even bigger plans for his invention. "I would rather it actually be used in the municipality where the water is being processed, but that's not the only place," he says.
"I also think it's important to remove microplastics from where the water is entering the sea - at wastewater treatment plants, for instance."
He doubts that this will be the solution to the general problem of microplastics, which has reached even the most remote regions of the Arctic. But he is adamant that won't stop him from being part of the solution.
"I believe that to really stop the microplastic problem, we have to stop using plastic, but even if we did stop using plastic today, we'll be struggling with microplastics in water for as long as we live."