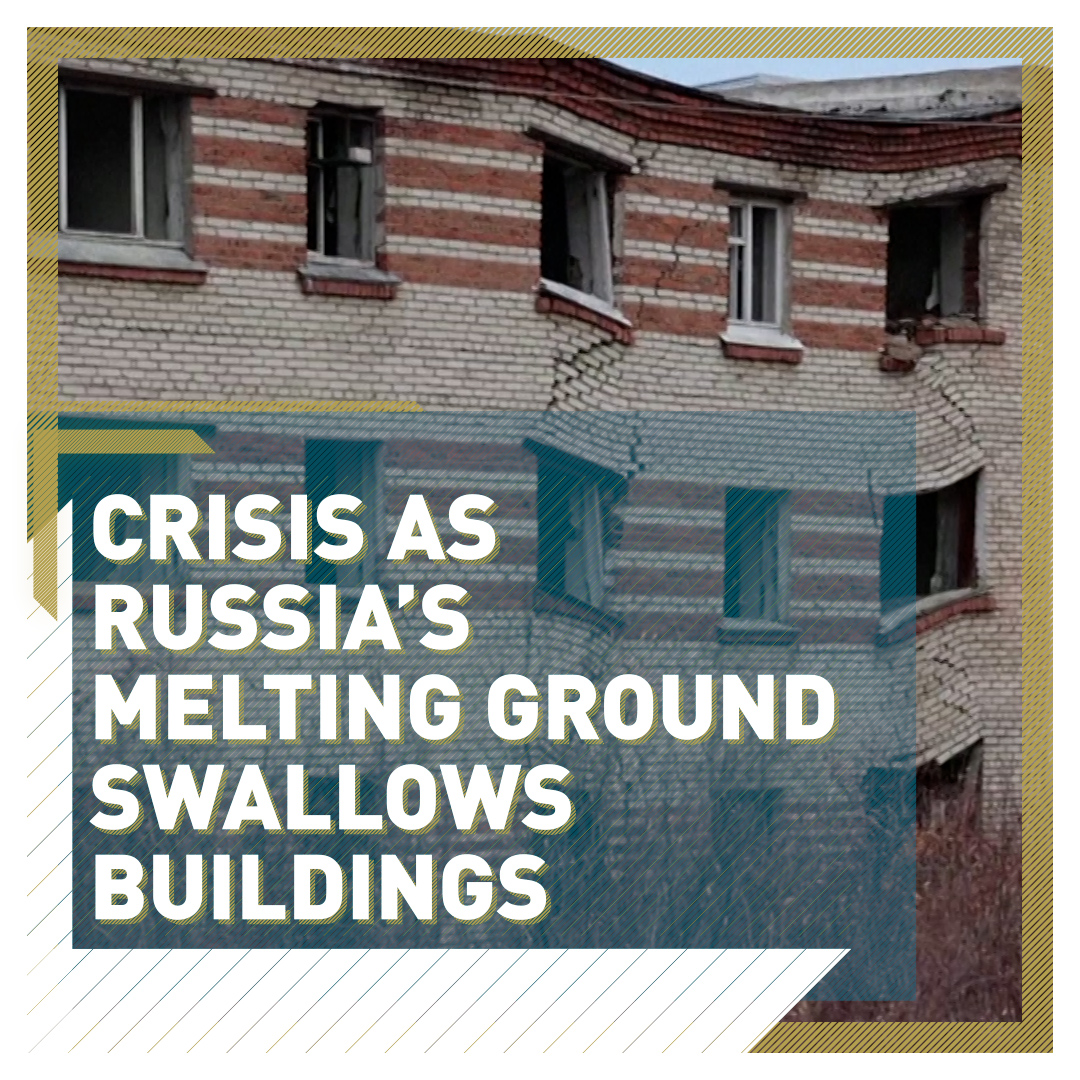 The old airport in the Siberian settlement of Churapcha has been unusable for years, its runway transformed into a swampy field of puffed-up mounds and reliefs.

Like cities and towns across northern and northeastern Russia, Churapcha is suffering the consequence of climate change thawing the permafrost on which everything is built.

"There isn't a single settlement in Russia's Arctic where you wouldn't find a destroyed or deformed building," said Alexey Maslakov, a scientist at Moscow State University.

Homes are becoming separated from sinking earth. Pipelines and storage facilities are under threat. Roads are increasingly in need of repair.

As Russia warms 2.8 times faster than the global average, the melting of Siberia's long-frozen tundra is releasing greenhouse gases that scientists fear could frustrate global efforts to curb climate-warming emissions. With permafrost covering 65 percent of Russia's landmass, the costs are already mounting.

Houses on the territory of a former airfield, damaged by thermokarst processes in the village of Churapcha, Russia. /Reuters/Maxim Shemetov

Houses on the territory of a former airfield, damaged by thermokarst processes in the village of Churapcha, Russia. /Reuters/Maxim Shemetov

The bumpy landscape around Churapcha, located some 3,100 miles east of Moscow, resembles giant sheets of bubble wrap in places where ice wedges inside the ground have melted, causing the ground to crumble, sag or cave in altogether.

Built in the 1960s and 1970s as Soviet Russia expanded into the Arctic, many buildings in the far north and far east were constructed with the assumption that the permafrost  – frozen for millennia  – was sturdy and would never thaw.

Apartment blocks sit atop stilts driven meters into the ground.

Churapcha, which has a population of 10,000, had its airport closed in the 1990s because of the thaw, scientists say.

Over the years, the once-smooth runway has become a mottled field that looks more like a dragon's back, as the ground sinks and the ice melts. Eventually, the area could become a lake, according to scientists.

Fyodorov at the Permafrost Institute has been studying the site for years, and found that some areas were subsiding at an average rate of 2cm to 4cm a year, while others were sinking by up to 12cm annually.

In eight settlements in central Yakutia, a region in northeast Russia, 72 percent of people surveyed by the North-Eastern State University said they have had problems with the subsidence of their homes' foundations. 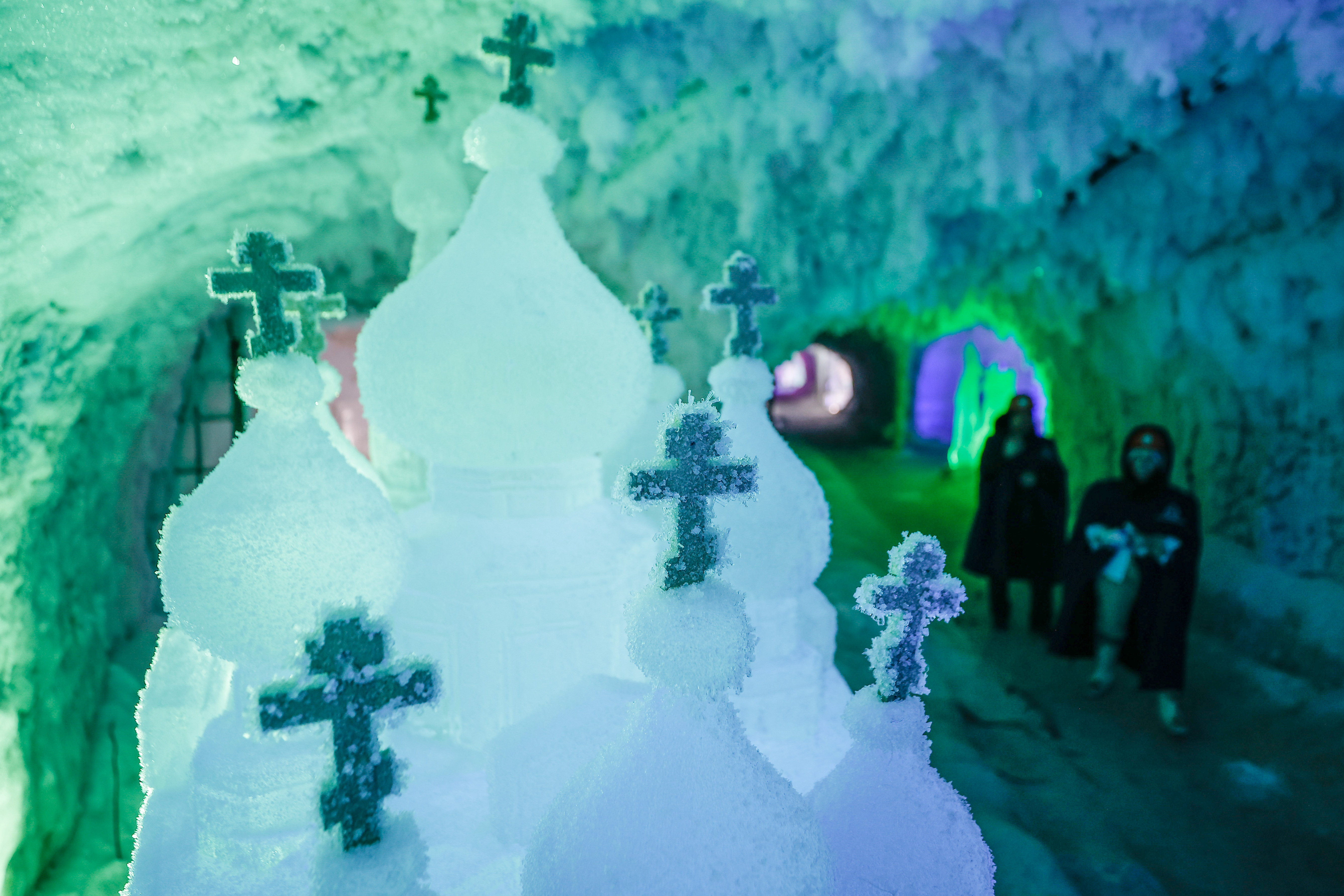 People visit the Kingdom of Permafrost museum inside the Soviet-era tunnels on the outskirts of the town of Yakutsk in the Republic of Sakha (Yakutia), Russia. /Reuters/Maxim Shemetov

People visit the Kingdom of Permafrost museum inside the Soviet-era tunnels on the outskirts of the town of Yakutsk in the Republic of Sakha (Yakutia), Russia. /Reuters/Maxim Shemetov

Across Russia, there are more than 15 million people living on foundations built on permafrost. Russia is investing to improve monitoring of the subterranean thaw.

"We don't know what's actually happening to it," Ecology Minister Alexander Kozlov said in August. "We need the monitoring not only to follow what is melting and how. But also scientists will use it to predict its consequences and learn how to prevent accidents."

The ministry plans to deploy 140 monitoring stations, each with wells up to 30 meters deep to measure the situation underground. While that may help determine how quickly the region is thawing, it won't help villagers like Yegor Dyachkovsky, whose home is already buckling at Churapcha's former airport.

In the five years since his family built their home, the ground has sunk below it. At first, the home was raised 30cm off the ground on its stilt foundations. The gap is now a full meter.

Dyachkovsky has brought five truckloads of soil to fill the gap between the ground and his home, and says he still needs more.

Some of his neighbors are trying to sell their homes. "Everyone is trying to figure out the situation on their own," said Sergei Atlasov, another Churapcha resident.

But Dyachkovsky's family are building a garage and seem ready to take their chances.

"How can we go against nature? We have to adapt," Dyachkovsky said. "It's like this everywhere. There's no one to complain to. To the spirit up high, perhaps."