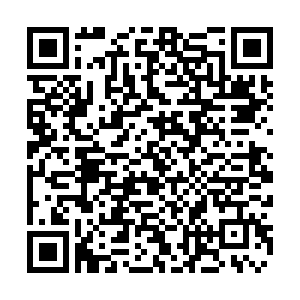 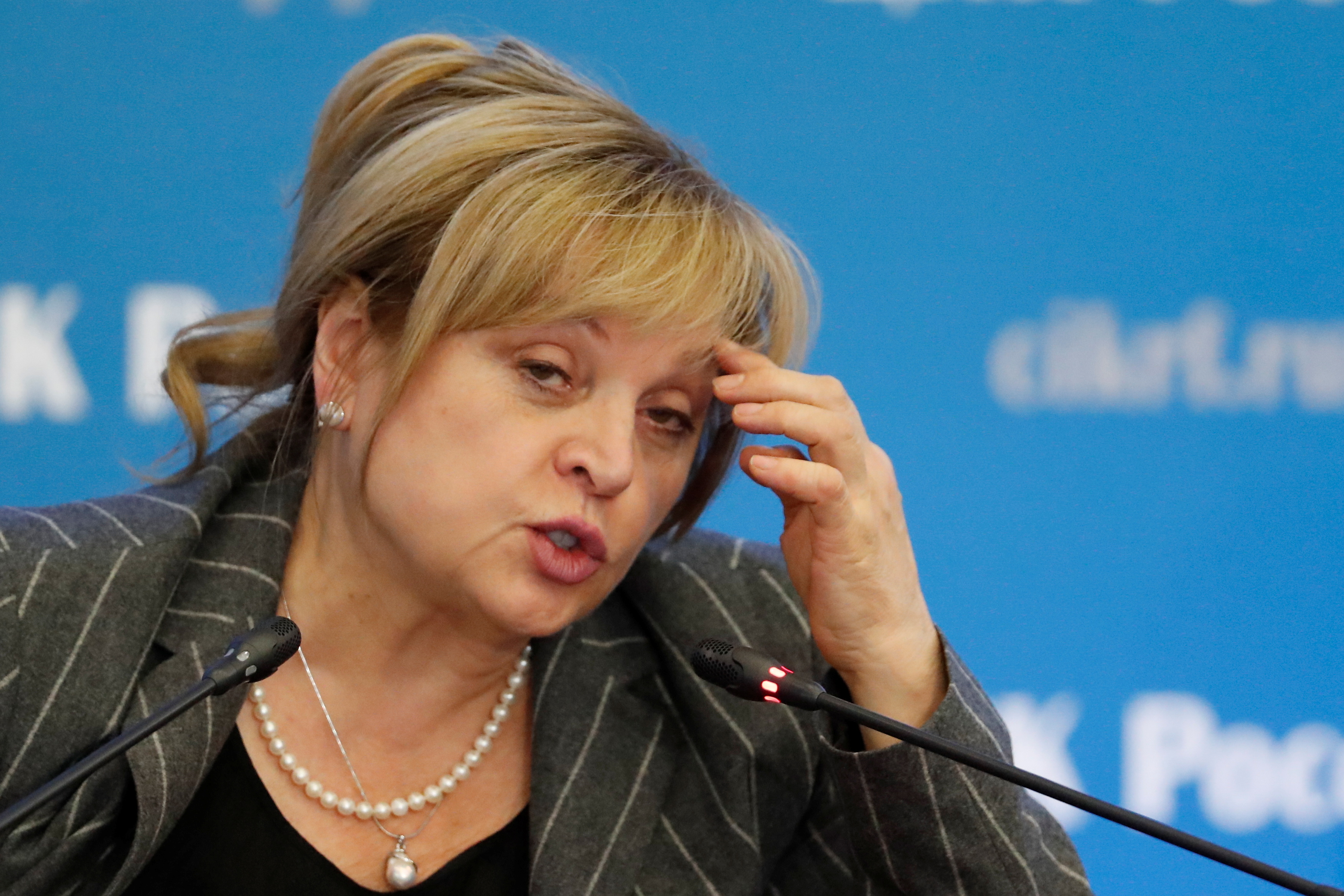 Ella Pamfilova, head of the Central Election Commission, addresses the media after poll close in the Russian parliamentary election, at the commission's headquarters in Moscow. Reuters/Shamil Zhumatov

Ella Pamfilova, head of the Central Election Commission, addresses the media after poll close in the Russian parliamentary election, at the commission's headquarters in Moscow. Reuters/Shamil Zhumatov

Russia's ruling United Russia party, which supports President Vladimir Putin, won an emphatic parliamentary majority after its most vociferous critics were prevented from contesting an election that opponents said was marred by large-scale fraud.

With 98 percent of ballots counted on Monday, the Central Election Commission said United Russia had won nearly 50 percent of the vote, with its nearest rival, the Communist Party, at just under 20 percent.

The scale of the victory means United Russia will have more than two-thirds of deputies in the 450-seat State Duma lower house of parliament. This will enable it to continue to push through laws without having to rely on other parties.

The Kremlin hailed the result, saying United Russia, which Putin helped found, had confirmed its role as the leading party. It said the election had been competitive, open and honest.

"The Communists have improved their results and there are new parties that have done well," said Kremlin spokesman Dmitry Peskov, who praised the way the election had been conducted.

Kremlin critics alleged large-scale vote rigging. They said the election was a sham and that a newly introduced electronic voting system had been used to deprive opponents of United Russia of victory in Moscow.

Some Moscow-based Communists who felt cheated called for a protest in the Russian capital on Monday evening. The central square they named as the venue was sealed off by police on Monday afternoon.

"With such a colossal number of violations, the results of the State Duma elections cannot be recognized as clean, honest or legitimate," said Lyubov Sobol, an ally of jailed Kremlin critic Alexei Navalny whose movement was declared extremist in June by a court.

Electoral authorities said they had voided any results at voting stations where there had been obvious irregularities and that the overall contest had been fair.

Sobol had hoped to run for parliament herself but Navalny's allies were barred from taking part after the extremism designation. Critical media and non-governmental organizations were also targeted by the authorities in the run up to the election.

Navalny's allies had organized a tactical voting campaign designed to drain support from United Russia, the popularity of which has fallen amid a malaise over faltering living standards and Navalny's allegations of corruption. 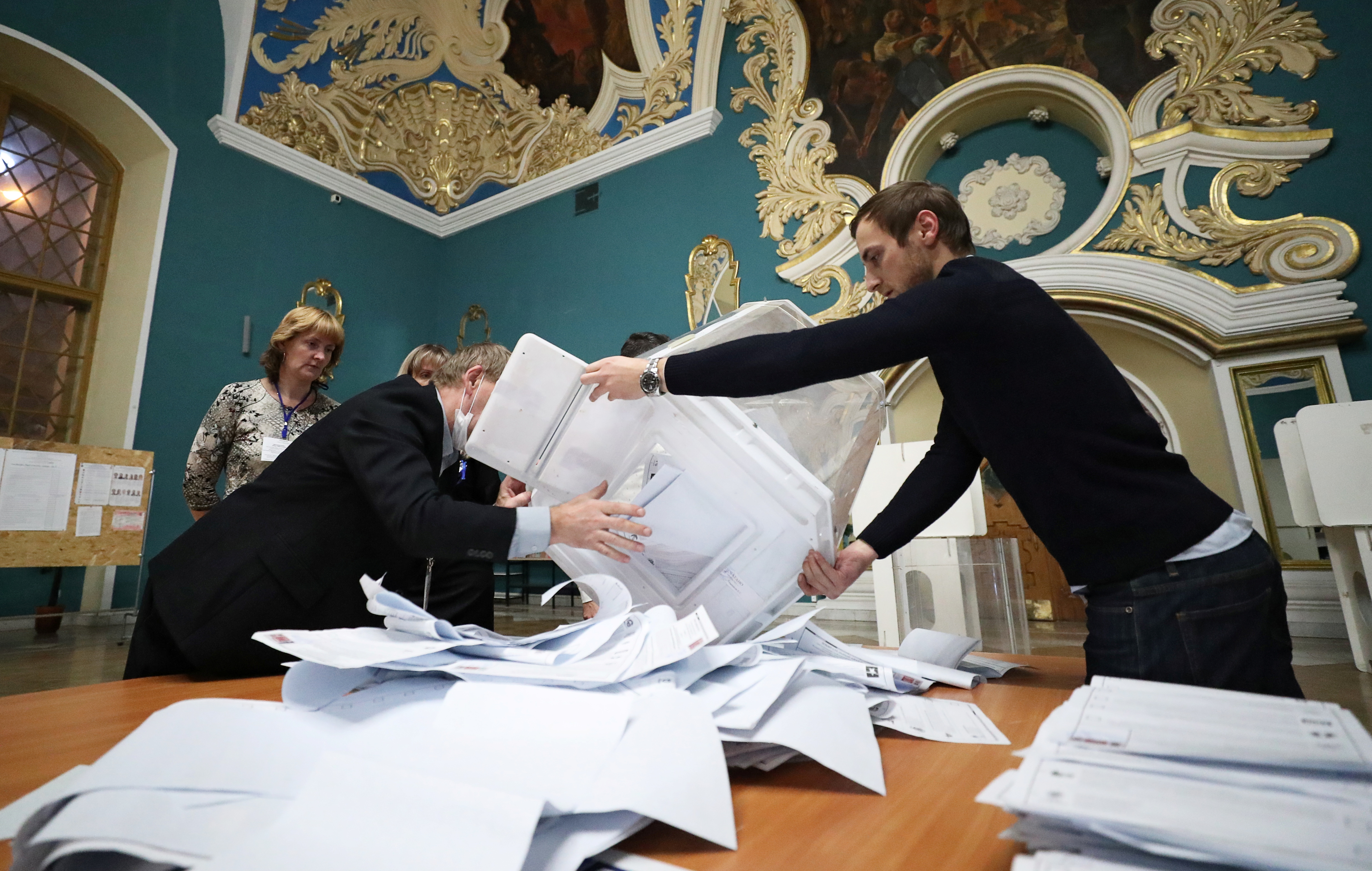 Members of a local election commission empty a ballot box before starting to count votes after polls closed during a three-day-long parliamentary election, at a polling station inside Kazansky railway terminal in Moscow. /Reuters/Evgenia Novozhenina.

Members of a local election commission empty a ballot box before starting to count votes after polls closed during a three-day-long parliamentary election, at a polling station inside Kazansky railway terminal in Moscow. /Reuters/Evgenia Novozhenina.

The outcome is unlikely to change the political landscape, with Putin, who has been in power as president or prime minister since 1999, still dominating before the next presidential election in 2024.

Putin has yet to say whether he will run. He was due to speak later on Monday.

The 68-year-old leader remains a popular figure with many Russians, who credit him with standing up to the West and restoring national pride.

The near-complete results showed the Communist Party finishing in second, followed by the nationalist LDPR party and the Fair Russia party with just over 7 percent each. All three parties usually back the Kremlin on most key issues.

At a celebratory rally at United Russia's headquarters broadcast on state television, Moscow's Mayor Sergei Sobyanin, an ally of the Russian leader, shouted "Putin! Putin! Putin!" to a flag-waving crowd who echoed his chant.

Golos, an election watchdog accused by authorities of being a foreign agent, recorded thousands of violations, including threats against observers and "ballot stuffing," examples of which circulated on social media. Some individuals were shown on camera appearing to deposit bundles of votes in urns.

United Russia held nearly three-quarters of the outgoing State Duma's 450 seats. That dominance helped the Kremlin pass constitutional changes last year that allow Putin to run for two more terms as president after 2024, and potentially stay in power until 2036.

The Kremlin denies a politically driven crackdown and says individuals are prosecuted for breaking the law. Both it and United Russia denied any role in the registration process for candidates.

One Moscow pensioner, who gave his name only as Anatoly, said he voted for United Russia because he was proud of Putin's efforts to restore what he sees as Russia's rightful status as a "great power."

"Countries like the United States and Britain more or less respect us now like they respected the Soviet Union in the 1960s and '70s. ... The Anglo-Saxons only understand the language of force," he said.

With official turnout reported to be around only 47 percent, there were signs of apathy.

"I don't see the point in voting," said one Moscow hairdresser, who gave her name as Irina. "It's all been decided for us anyway."