Download
Sinovac, Pfizer, Novavax: What are the differences between COVID-19 vaccines?
Giulia Carbonaro 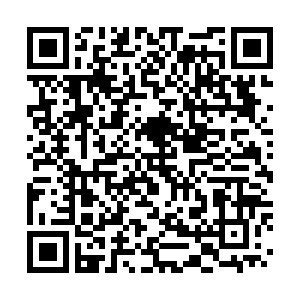 There's a new vaccine moving through the global approval process, which could help with increasing uptake of jabs.

Novavax's shot, called Nuvaxovid, was given emergency approval by the World Health Organization on Friday and now the European Union's regulator, the European Medicines Agency, confirmed it will follow the UN body's lead after a meeting on Monday.  The EU will now initiate its deal to buy 200 million doses of the vaccine.

Healthcare professionals are hopeful this drug can persuade those not yet vaccinated to receive the medication – because it uses a more traditional method to protect patients from the virus.

The Novavax jab relies on "protein subunit" technology, which has been used for decades in vaccines for other illnesses, such as Whooping Cough and Hepatitis B.

That's unlike other COVID-19 vaccines, which use the adenovirus from other species or mRNA technology.

Gavi, the Vaccine Alliance, explained protein vaccines are suitable for people with compromised immune systems and the lack of  live components removes the risk of the vaccine triggering disease.

Since the beginning of the pandemic, teams of scientists around the world have tirelessly worked to develop vaccines against COVID-19. As a result of those unprecedented efforts, there are now at least eight jabs already administered around the world and hundreds still in clinical and preclinical development. Here's a guide to those approved so far: How does it work? As a protein-based vaccine, Novavax is slightly different from the other jabs. But the broad goal of triggering the body's immune system to elicit a response against the "spike protein" on the virus remains the same.

The Novavax shot uses a lab-made protein and an "adjuvant" which help prompt a human immune reaction. It involves two injections, which the makers recommend to be taken three weeks apart.

How effective is it? During Phase 3 trials in the UK, the vaccine proved 89.3 percent effective against the original virus and 90.4 percent in trials that took place in Mexico and the U.S.. It has also proved highly effective against UK and South Africa-discovered variants.

How is it stored? It can be stored at domestic fridge temperature. 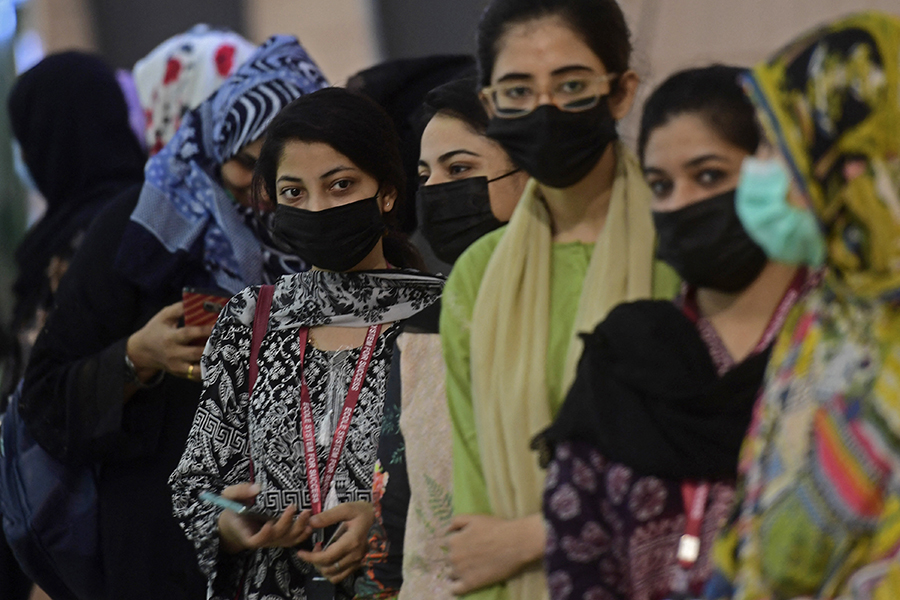 Women wait for their turn to receive a dose of the COVID-19 Sinovac jab at a vaccination camp in Karachi on June 3. The head of a Pakistani province ordered that government employees who refuse to be vaccinated not be paid from next month. /Asif Hassan/AFP

Women wait for their turn to receive a dose of the COVID-19 Sinovac jab at a vaccination camp in Karachi on June 3. The head of a Pakistani province ordered that government employees who refuse to be vaccinated not be paid from next month. /Asif Hassan/AFP

How does it work? The vaccine made by China's Sinovac, called CoronaVac, uses technology that has been traditionally used in vaccine manufacturing and has been proved to work safely and efficiently on people. Particles from the virus, inactivated by using chemicals, heat or radiation, are injected into the body, where they trigger an immune response that stops a person from falling seriously ill when they contract COVID-19. Two doses of the vaccine are required, 21 days apart.

How effective is it? Researchers in the countries where clinical trials were held found different results. Experts at the University of Chile reported that the vaccine was 56.5 percent effective two weeks after the second dose was administered – that's higher than the seasonal flu vaccine which is roughly 50 percent effective.

But the vaccine surprisingly proved more effective when administered in a real-life scenario: in Indonesia, where many health workers received a jab of CoronaVac, a Jakarta-based study found the vaccine protected 98 percent of medical staff from death and 96 percent from hospitalization as soon as seven days after the second dose, in the period from January to March.

CoronaVac is the most administered vaccine in Brazil, with researchers there saying its efficacy was not diminished by the Gamma variant, which was first discovered in the country.

How is it stored? The jab can be kept at regular fridge temperature, which also makes it easier for poorer nations to transport. 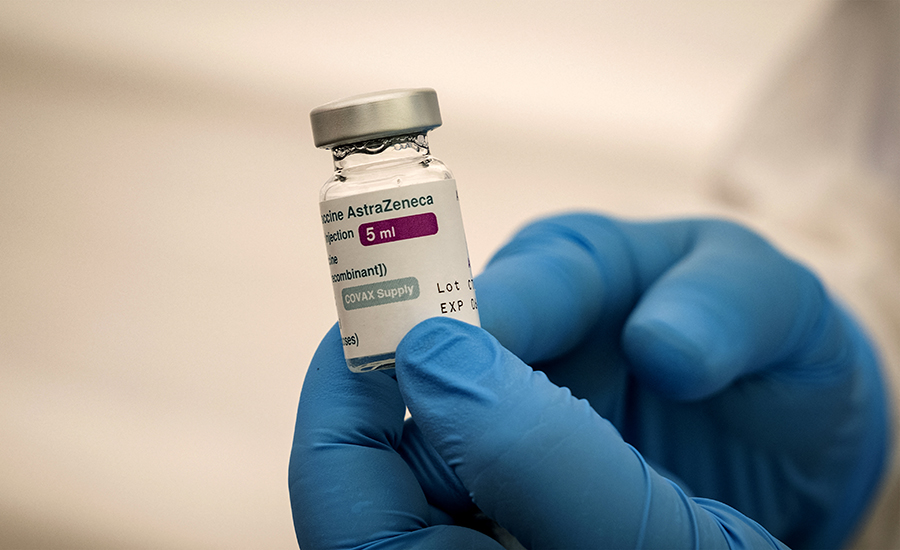 Those aged under 40 in the UK can ask to be offered an alternative vaccine to the Oxford-AstraZeneca one after doctors reported blood clots and signs of strokes in patients. /Fadel Senna/AFP

Those aged under 40 in the UK can ask to be offered an alternative vaccine to the Oxford-AstraZeneca one after doctors reported blood clots and signs of strokes in patients. /Fadel Senna/AFP

Why are Gray Whales dying on American beaches?

How does it work? The vaccine developed by the Wuhan Institute of Biological Products, like many others, uses an inactivated coronavirus to trigger an immune response in the body.

How effective is it? Phase 3 results from trials conducted in multiple countries showed that two doses of the vaccine, administered at an interval of 21 days, have an efficacy of 79 percent against the virus 14 or more days after the second dose. It was found to be 79 percent effective at preventing hospitalization.

Two other efficacy trials are currently under way.

How is it stored?  The jab can be stored at regular fridge temperatures.

How does it work? Scientists have taken genes from the spike protein on COVID-19 and inserted them into a harmless common cold virus to create their vaccine. When injected into the body, cells begin to reproduce the spike protein. This immune system retaliates by producing antibodies and creating T-Cells to destroy those cells and prevent the person from falling ill. If the person is infected with COVID-19 at a later date, they now have antibodies and T-Cells to deal with it.

A very small proportion of people who had received the jab experienced blood clots, which caused a temporary halt in the administration of the jab in dozens of countries which had included it in their vaccination programs.

After an investigation into the issue, the EU's European Medicines Agency concluded that blood clots and low platelets needed to be listed as possible side effects of the vaccine, although they might impact roughly "one in 100,000" vaccinated people and the vaccine is still considered safe.

In May, UK authorities recommended that people under the age of 40 should receive a different vaccine where possible, but regulators stress that the risks from COVID-19 still outweigh that from any approved vaccine.

How is it stored? The vaccine can be transported and stored in normal fridges, meaning it can be distributed relatively easily.

How does it work? The Johnson & Johnson COVID-19 jab is an adenovirus vaccine, which means it uses a common cold virus that has been genetically engineered to cause no harm to humans. Using the cold as a host, the Johnson & Johnson vaccine delivers part of the COVID-19 genetic sequence into the body. This alerts the body to the new coronavirus without putting patients at high risk.

Unlike all other vaccines approved so far, the Johnson & Johnson jab is considered effective after only one dose.

How effective is it? A single dose has proved to be 67 percent effective overall at preventing moderate to severe illness in global clinical trials. In trials in the U.S. it was recorded as 72 percent effective at stopping infections, but it was only effective in 57 percent of cases in South Africa, perhaps owing to different virus variants.

In both the U.S. and South Africa, the Johnson & Johnson vaccine proved 100 percent effective in preventing hospitalization and death.

A recent study published in April also came to the conclusion that the Johnson & Johnson vaccine is effective against the B.1.351 variant first identified in South Africa, now renamed by the WHO 'Beta', and the Gamma variant, that first emerged in Brazil.

The firm is also experimenting with a second injection, to see if that boosts immunity further.

How is it stored? A single dose can be stored for months at regular fridge temperatures. 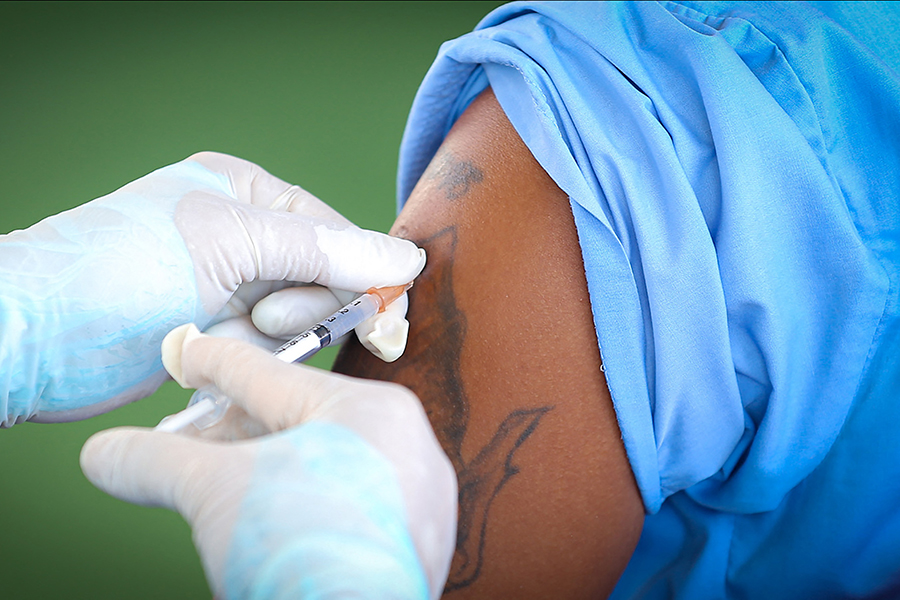 A medical staff member inoculates an inmate at a prison in Samut Prakan with a dose of the CoronaVac vaccine. /Handout/THAILAND'S DEPARTMENT OF CORRECTIONS/AFP

A medical staff member inoculates an inmate at a prison in Samut Prakan with a dose of the CoronaVac vaccine. /Handout/THAILAND'S DEPARTMENT OF CORRECTIONS/AFP

How does it work? This vaccine uses innovative mRNA technology, which works differently from the traditional approach used to create, for example, the Oxford-AstraZeneca jab. Rather than injecting the virus into a person, the vaccine instead introduces the body to a messenger sequence, which gives the immune system instructions to create its own antigens – the cells that prompt the production of antibodies and T-Cells to fight COVID-19.

On March 31, Pfizer announced that the vaccine was 100 percent effective in preventing COVID-19 among children aged 12 to 15.

Data from Pfizer suggest its jab is 100 percent effective against the South-African 'Beta' variant.

How is it stored? One of the drawbacks of the Pfizer vaccine is that it must be kept at minus 70 degrees Celsius during transportation. 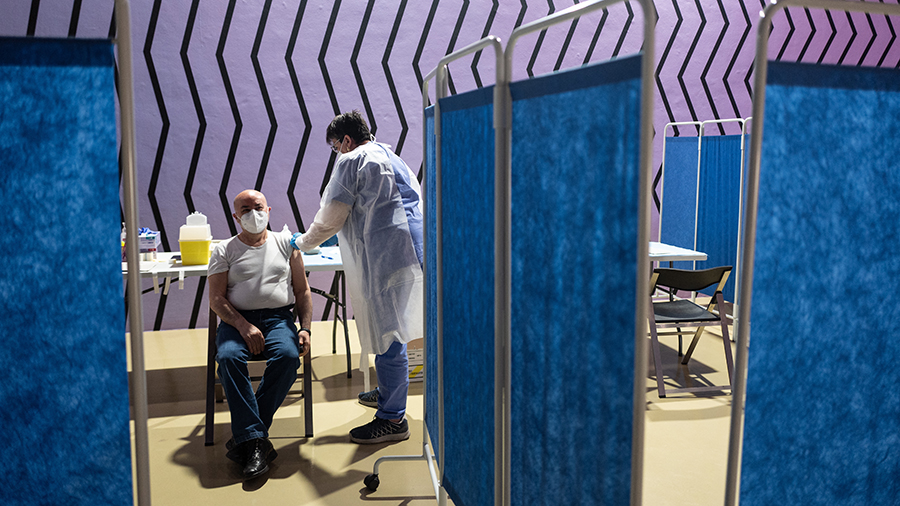 A medical worker vaccinates a patient with a dose of the Moderna COVID-19 vaccine, in the rooms of the Claudia Comte exhibition at the Museum of Contemporary Art 'Castello di Rivoli' near Turin, Italy. /Marco Bertorello/AFP

A medical worker vaccinates a patient with a dose of the Moderna COVID-19 vaccine, in the rooms of the Claudia Comte exhibition at the Museum of Contemporary Art 'Castello di Rivoli' near Turin, Italy. /Marco Bertorello/AFP

How does it work? Like the Pfizer jab, Moderna's shot is an mRNA vaccine and works according to the same principles explained above.

How is it stored? The Moderna jab can be stored in normal fridges for up to 30 days and at room temperature for 12 hours. It's also stable at minus 20 degrees Celsius for up to 12 months. 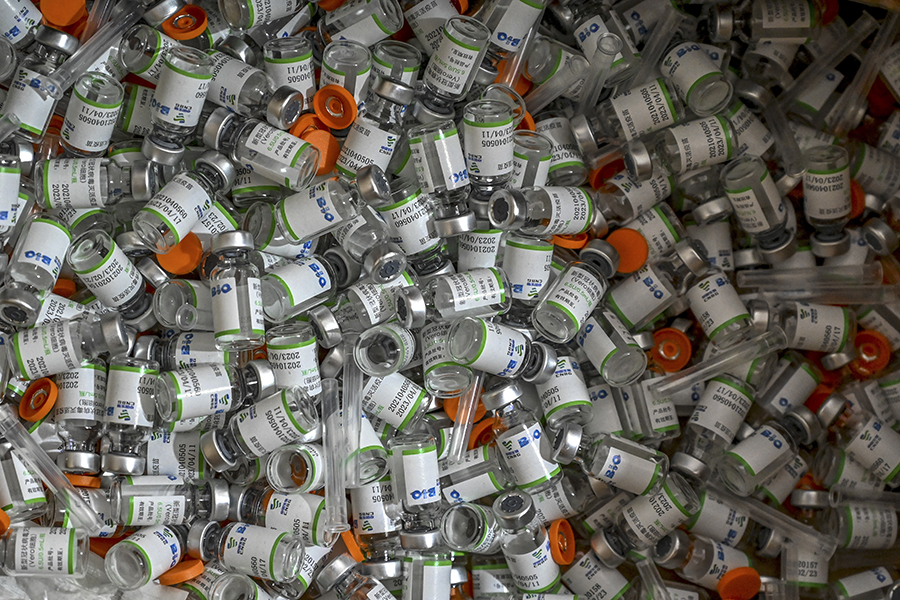 Before the WHO officially approved it in May, the Sinopharm vaccine was already administered to millions of people in China and elsewhere. /ISHARA S. KODIKARA/AFP

Before the WHO officially approved it in May, the Sinopharm vaccine was already administered to millions of people in China and elsewhere. /ISHARA S. KODIKARA/AFP

How does it work? The Sputnik V vaccine uses two inactivated common viruses and operates on the same principle as the AstraZeneca, Sinovac and Sinopharm vaccines to stimulate an immune response from the body.

How effective is it? In December 2020, trials conducted in Russia claimed the vaccine is around 91.4 percent effective against the original strain of the virus, a number that then rose to 91.6 percent in February based on Phase 3 data published in The Lancet medical journal.

How is it stored? Standard household fridges in dry form.

This article was updated in December 2021.