Download
As global vaccine doses hit one billion, who leads the way in Europe and why?
Tim Hanlon 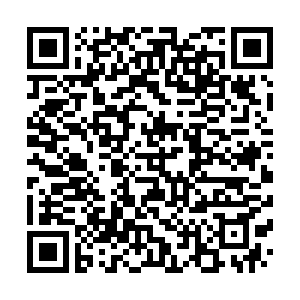 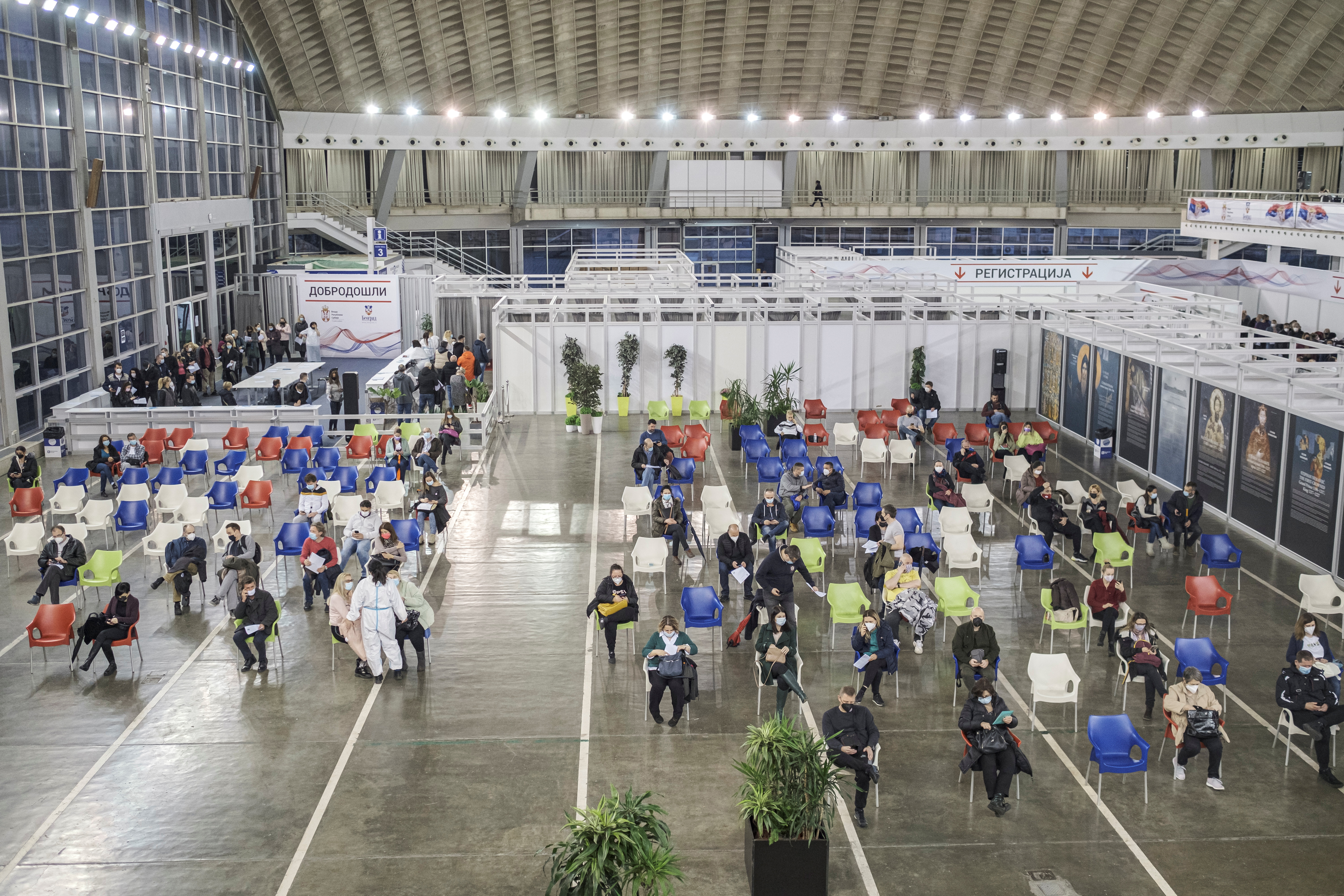 Hungary and Serbia are both at the top of the list of countries that have delivered most vaccines. /Marko Djurica/Reuters

Hungary and Serbia are both at the top of the list of countries that have delivered most vaccines. /Marko Djurica/Reuters

Vaccines have been distributed at a blistering paceout – but why have Hungary and Serbia been so successful in their rollout?

Back on December 8, UK citizen Margaret Keenan became famous for receiving the first European jab and now less than five months later over a billion doses have been given.

The UK features high up the list of European countries and territories (with populations over 250,000) that have had most doses, only beaten by Malta.

Why are countries running out of hospital oxygen?

How to get to Mars

"Normally, it takes five to 10 years to produce a new vaccine," European Commission President Ursula von der Leyen told the European Parliament in February. "We did it in 10 months. This is a huge scientific success."

A look across Europe, though, reveals that the distribution has been far from even, with some countries racing ahead amid accusations of politics in a new "arms race" including attacks on the efficacy of certain vaccines. 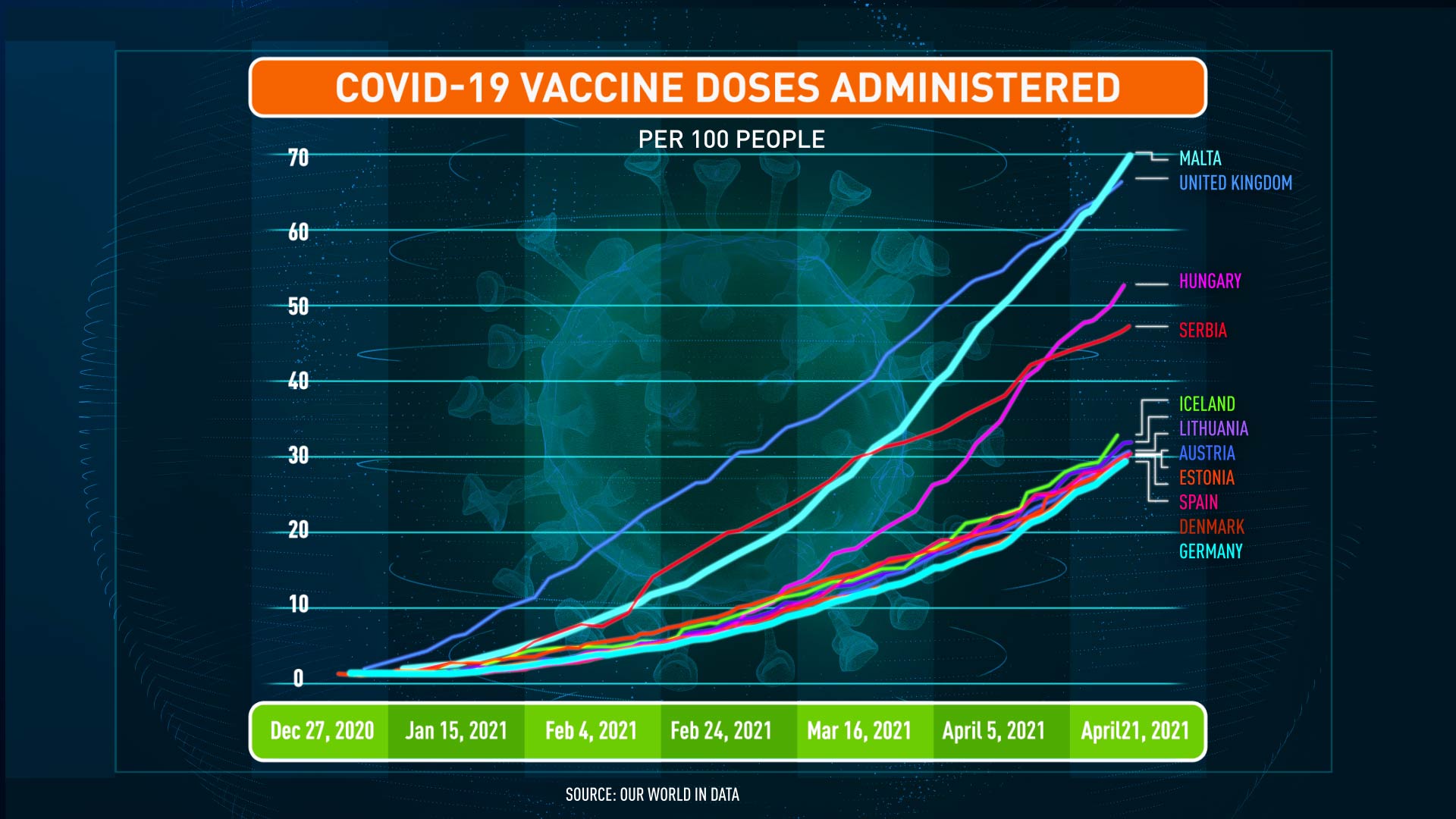 Who leads the way in Europe

Gibraltar is well out in front with 201.75 doses given out per 100 people but the UK territory only has a population of 33,700. Discounting countries with populations lower than 250,000, then Malta tops the vaccine list with 70.56 doses per 100 people.

Then comes the UK with the British government having invested heavily in its vaccination program that got off to a quick start with the distribution of the homemade Oxford University–AstraZeneca jab, later renamed Vaxzevria. So far 67.14 doses have been given out per 100 people.

Hungary and Serbia are also in the top 10, perhaps surprising as they are not among the wealthier countries in Europe. Hungary has given out an average of 53.1 doses per 100 people and Serbia has given 47.53.

In the EU there have been 28.73 doses per 100 people. Across the bloc there was criticism at the slow start to the vaccine distribution and acceptance by leaders that it should have been done better.

The EU became engaged in an argument with the UK over supplies of AstraZeneca with claims from EU leaders that deliveries of the vaccine were being held back.

Many countries in the EU have been aiming to speed up the rollout with a new wave of the virus hitting. Austria has given 30.66 doses per 100 while Germany and France are just above and below the EU average on 29.63 and 27.52 respectively.

Hungary is among Europe's most-vaccinated countries, with the figure set to reach four million this coming week – around 40 percent of the population.

The government has moved to relax the curfew in place and other restrictions but at the same time the country has been suffering badly from COVID-19 cases. It has topped the death rates list globally as its hospitals have struggled to cope with the number of patients.

Like Serbia it has been receiving a variety of vaccines from both the East and West politically. Hungary was the first country to buy the Chinese jab Sinopharm.

"We basically doubled the speed of the European [Union's] vaccination program because of the Chinese and Russian vaccines," said Zoltan Kovacs, spokesman for the Hungarian government. Hungary has also now given its backing to another Chinese vaccine, Convidecia.

Hungarian data show that only one percent of those vaccinated with one dose of a COVID-19 vaccine have subsequently contracted the disease and after receiving two doses the rate is even lower, Prime Minister Viktor Orban's chief of staff said last Thursday. 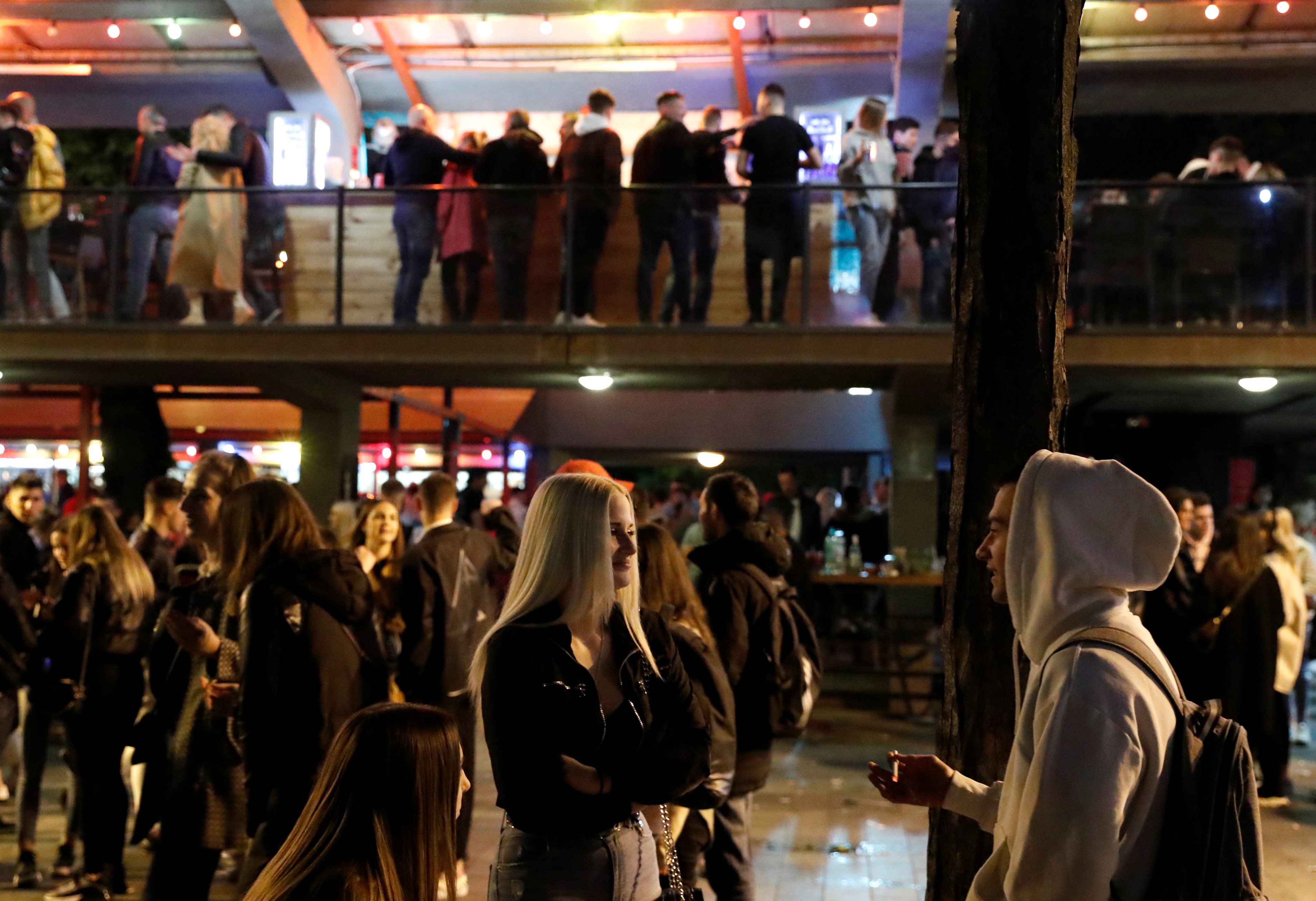 Outdoor terraces of bars have reopened in Hungary despite high numbers of virus cases. /Bernadett Szabo/Reuters

Outdoor terraces of bars have reopened in Hungary despite high numbers of virus cases. /Bernadett Szabo/Reuters

With a population of seven million, Serbia has given out 3.2 million doses from four vaccines: Pfizer, Vaxzevria, Sputnik V and Sinopharm. Like Hungary, it is seen as at the center of vaccine politics between East and West having received the Russian Sputnik V jab and China's Sinopharm vaccine.

It has mobilized its vaccine program quickly while other countries in the region like Bosnia or Bulgaria have far lower figures for distribution.

Serbia began giving out the Sputnik V vaccine in early January while there was plenty of skepticism in Europe over the Russian jab. Russia registered Sputnik V last August ahead of large-scale clinical trials, prompting concern among experts over the fast-track process.

But later reviews have been largely positive, with the medical journal The Lancet publishing results showing it to be safe and more than 90 percent effective.

Serbia has been so successful with its program that it has welcomed "vaccine tourists" with people traveling from neighboring countries for a jab.

Still, Serbia has suffered badly from new infections and deaths in recent months – but they are declining with an average of 2,524 new infections now reported each day.

While Hungary and Serbia have had a high level of infections despite a high roll-out of vaccines, the benefits have been clear in other countries like the UK.

The UK has been able to ease restrictions and open bars for outside drinking due to a drop in cases. Last Saturday there were 2,061 new cases and 32 deaths.

There remains concern, however, over side-effects from vaccines – especially the Vaxzevria jab – and fears over whether the jabs will continue to be effective against new variants.

Serious side-effects remain rare, with the UK officially reporting 168 blood clots in more than 21.2 million people who have had the Vaxzevria jab.