- UK Foreign Secretary Dominic Raab has said he would be asking for clarification about Von der Leyen's remarks, because it "cuts across the direct assurances that we had from the Commission."

- Poland is to enter a nationwide lockdown as the country battles a surge in infections. From Saturday, theaters, shopping malls, hotels and cinemas will be closed, while schools will switch to remote learning, Health Minister Adam Niedzielski said.

- The Greater Paris region is to be placed under tougher restrictions on Thursday, following a surge in new infections that has led to the area's intensive care wards becoming overwhelmed, government spokesman Gabriel Attal said.

- The World health Organization (WHO) has said its Advisory Committee on Vaccine Safety is assessing the latest data on the Oxford University-AstraZeneca jab and will share its findings as soon as the review is completed. But at this time the "WHO considers that the benefits of the AstraZeneca vaccine outweigh its risks and recommends that vaccinations continue," it added.

- It is still too early to say if there is a link between the AstraZeneca vaccine and the three cases of bleeding, blood clots and low levels of platelets reported in Norway, the country's health authorities have said.

- The UK's Prime Minister Boris Johnson has said he will be getting the AstraZeneca jab very soon, as he reiterated his confidence in the jab. "The best thing I can say about the Oxford-AstraZeneca vaccine program is that I finally got news that I'm going to have my own jab ... very, very shortly. It will certainly be Oxford-AstraZeneca that I will be having," he said.

- France's Prime Minister Jean Castex says he intends to get the Oxford University-AstraZeneca vaccine as soon as the European health authorities confirm the jab is safe, amid reports of people suffering from blood clots after getting the shot.

- The amount of available vaccines in the UK will be reduced from March 29 following a cut in supply, a letter sent around the country's National Health Service said. "They [the government's Vaccines Task Force] now currently predict this will continue for a four-week period, as a result of reductions in national inbound vaccines supply," the letter added.

- Bosnia plans to buy 500,000 doses of Russia's Sputnik V vaccine following delays in deliveries of shots from the EU scheme and the COVAX fund.

- France has entered a third wave of the pandemic following a surge in new infections, according to Prime Minister Jean Castex, who added that the variant first discovered in the UK is "becoming more and more present." 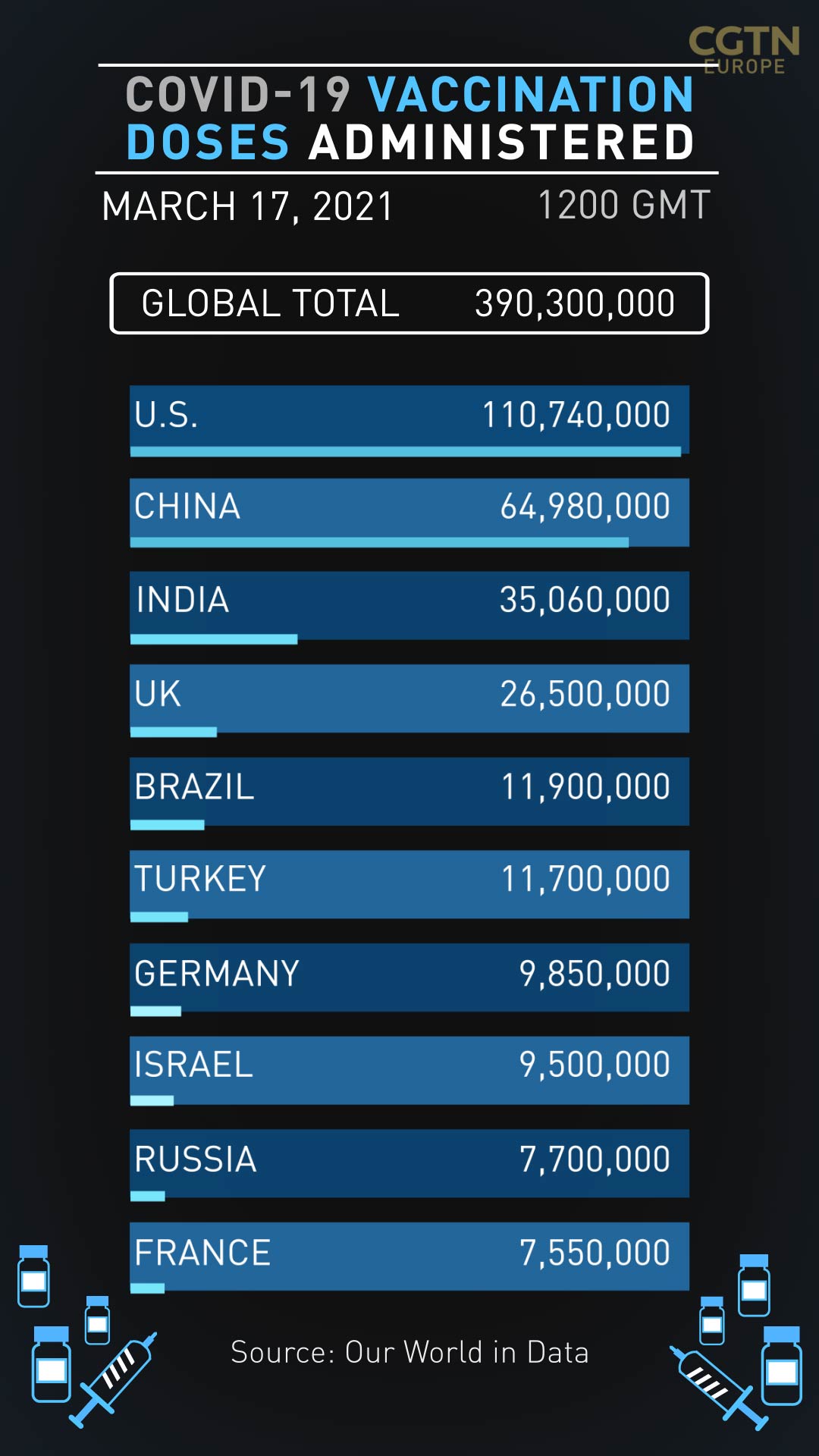 France's prime minister said "the time has come for new steps" for Greater Paris, where the incidence rate is very high, hospitals are at near-capacity and the first evacuations have taken place of patients from the capital region by plane to other parts of France.

Government spokesman Gabriel Attal said the Greater Paris region will be placed under tougher restrictions on Thursday. While Prime Minister Jean Castex refused to be drawn on the exact measures, but did say that a weekend lockdown for Paris is being discussed.

Castex said he would take the Oxford University-AstraZeneca vaccine as soon as it is reapproved. He has no underlying conditions and is 55, so he has not had it yet but he says the Anglo-Swedish drugmaker's shot is "useful" and he says the vaccination program "is the route out of the crisis."

He said: "We are in an extremely difficult situation." Adding that "it is a type of third wave" currently being seen in France, explaining: "We must take equitable decisions neither too early nor too late."

The UK's medicines regulator, the Medicines and Healthcare products Regulatory Agency (MHRA) has reiterated its backing for the AstraZeneca vaccine after 13 countries, mostly in Europe, suspended its use over worries it could cause blood clots.

The MHRA said the benefits of the jab "far outweigh the risks" and that it was "not confirmed" the vaccine caused any reported blood clots.

Its second statement on the issue in about 24 hours is a clear attempt to reassure the public that its use is safe, with around 17 million people in the UK already taking it.

Health Secretary Matt Hancock backed up the regulator's call, urging people to "get the jab."

France has entered a third wave of the pandemic following a surge in new infections, according to Prime Minister Jean Castex. /AP

France has entered a third wave of the pandemic following a surge in new infections, according to Prime Minister Jean Castex. /AP

Italy's Health Minister Roberto Speranza is confident the country's AstraZeneca vaccination campaign will continue, as it awaits an official ruling by the European Medicines Agency over safety concerns.

It comes as Italy battles a third wave of infection, with 20,000 new cases and 502 deaths registered on Tuesday.

In a bid to contain the spread of highly contagious variants, new lockdown measures came into effect this week across the country with the closures of shops, schools and restaurants.

Tomorrow, a national memorial service will take place in the city of Bergamo to honor the more than 100,000 victims of the pandemic in Italy.

Hungary has recorded its highest number of deaths so far with, reporting 195 people have died in the past 24 hours.

It comes as another 100,000 doses of China's Sinopharm vaccine arrived in Hungary on Wednesday. According to the government, the country remains in second place in the European Union in terms of vaccination headcount.

New data also show the willingness to be vaccinated is increasing, with 46.4 percent of the population indicating they would like to get a jab.

However, while the government is celebrating its vaccination strategy, there are reports in local media that people are skipping the queue. It's understood some are using personal connections to get the jab – putting themselves ahead of elderly Hungarians and medical workers.

New coronavirus infections are on the rise again in Germany and the Robert Koch Institute, which monitors the nation's COVID-19 infections, has warned of "exponential growth" in the next few weeks. The infection rate continues to climb, even though the country is still under restrictions that keep many businesses shut.

Despite this, many worn out Germans are now eyeing spring holidays in Mallorca. The Balearic Islands have been removed from the list of coronavirus risk areas due to the low number of infections, which means travel is possible without a quarantine on return to Germany. Airlines and tour operators are jumping at the possibility and increasing their offerings for the Easter holidays.

But politicians in Berlin are horrified. They're warning about so-called "incidence hopping" and calling for a return to compulsory testing for these tourists returning to Germany.

WATCH BELOW: Hungary receives another 100,000 doses of China's Sinopharm jab

CGTN China: China's new vaccination bus to be put into use in April