Download
How well are COVID-19 vaccines working in the real world?
Arij Limam and Gary Parkinson 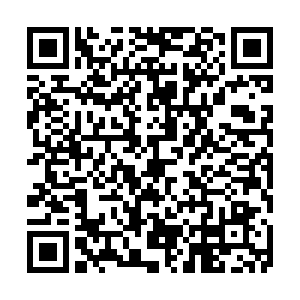 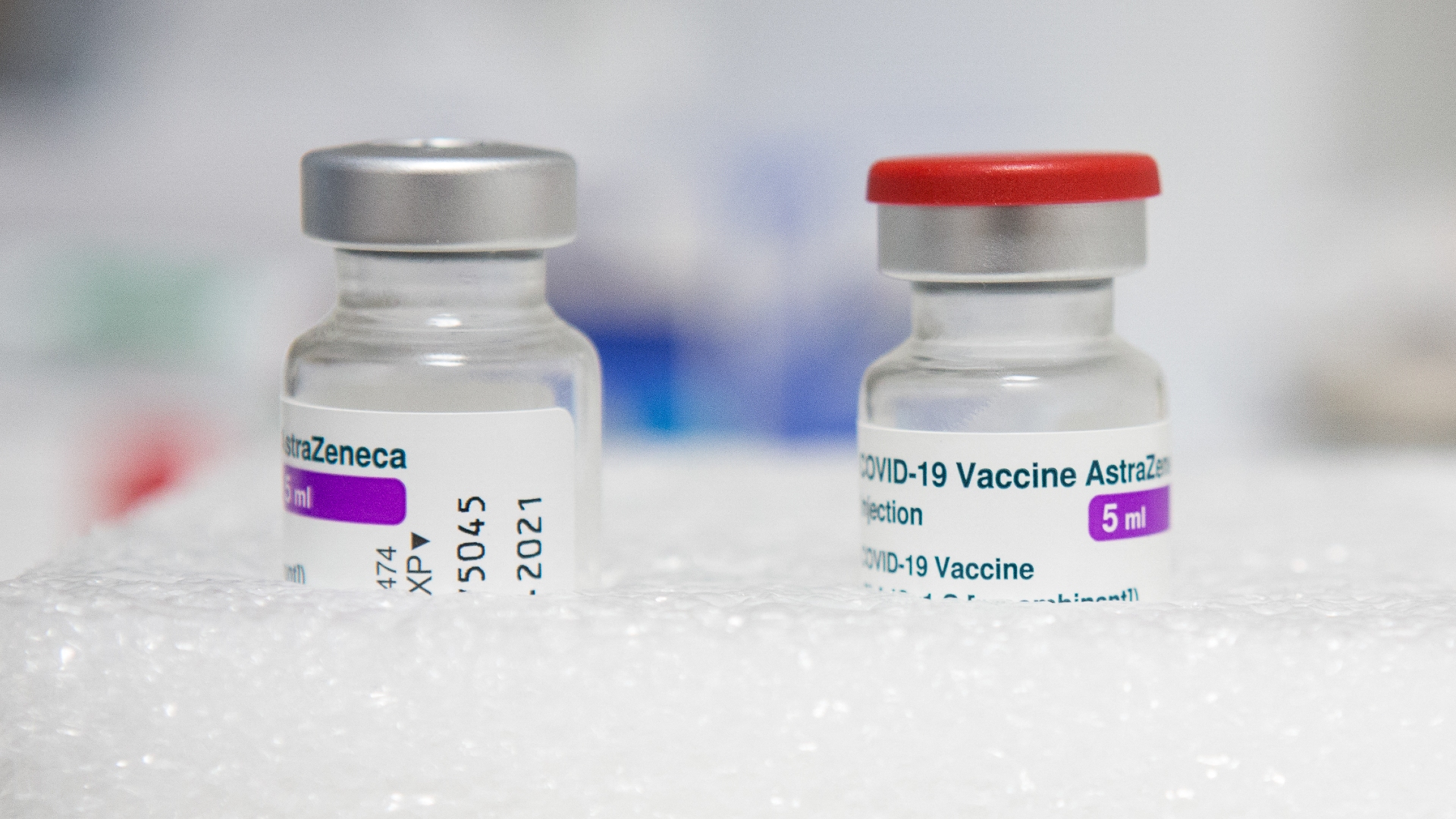 Real-world studies into the effectiveness of COVID-19 vaccines have shown very positive results in reducing the risk of infection, as well as the risk of hospitalization and death if infected. /Fred Scheiber/AFP

Real-world studies into the effectiveness of COVID-19 vaccines have shown very positive results in reducing the risk of infection, as well as the risk of hospitalization and death if infected. /Fred Scheiber/AFP

The development and approval of COVID-19 vaccines has happened at record-breaking speed and has prompted optimism that a pandemic, which has killed 2.5 million of the world's population, could be brought under control.

Millions of doses have been given to people since late 2020 – as well as the hundreds of thousands who took part in the trials before then. So far, the "real-world" picture suggests that vaccines are working well – even better than the figures quoted in the trials.

It is still early days, with many uncertainties about the long-term protection from the vaccines, but here is a round-up of the latest statistics on the various vaccines published so far.

The statistics that matter

Israel has led the way in rapid vaccination, meaning it is among the first to present results from the real world rather than trials.

Its health ministry recently unveiled data showing the Pfizer vaccine was 98.9 percent effective at preventing death by COVID-19 while decreasing the chance of hospitalization by the same percentage. It also reduced morbidity – that is, having the disease; morbidity is not to be confused with mortality – by 95.8 percent. 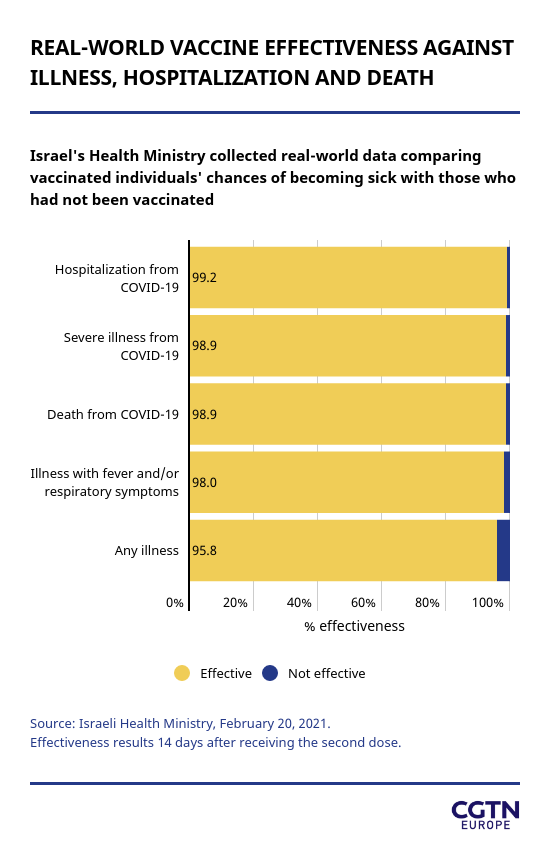 As World Health Organization chief scientist Soumya Swaminathan noted in February: "In all the clinical trials that have been done so far with the seven or eight [vaccine] candidates that we know about, there's been no case of a death or a severe disease with hospitalization occurring in the vaccine group."

What do vaccine efficacy numbers mean?

As it happens, across the board, those data on deaths and hospitalizations look really good. 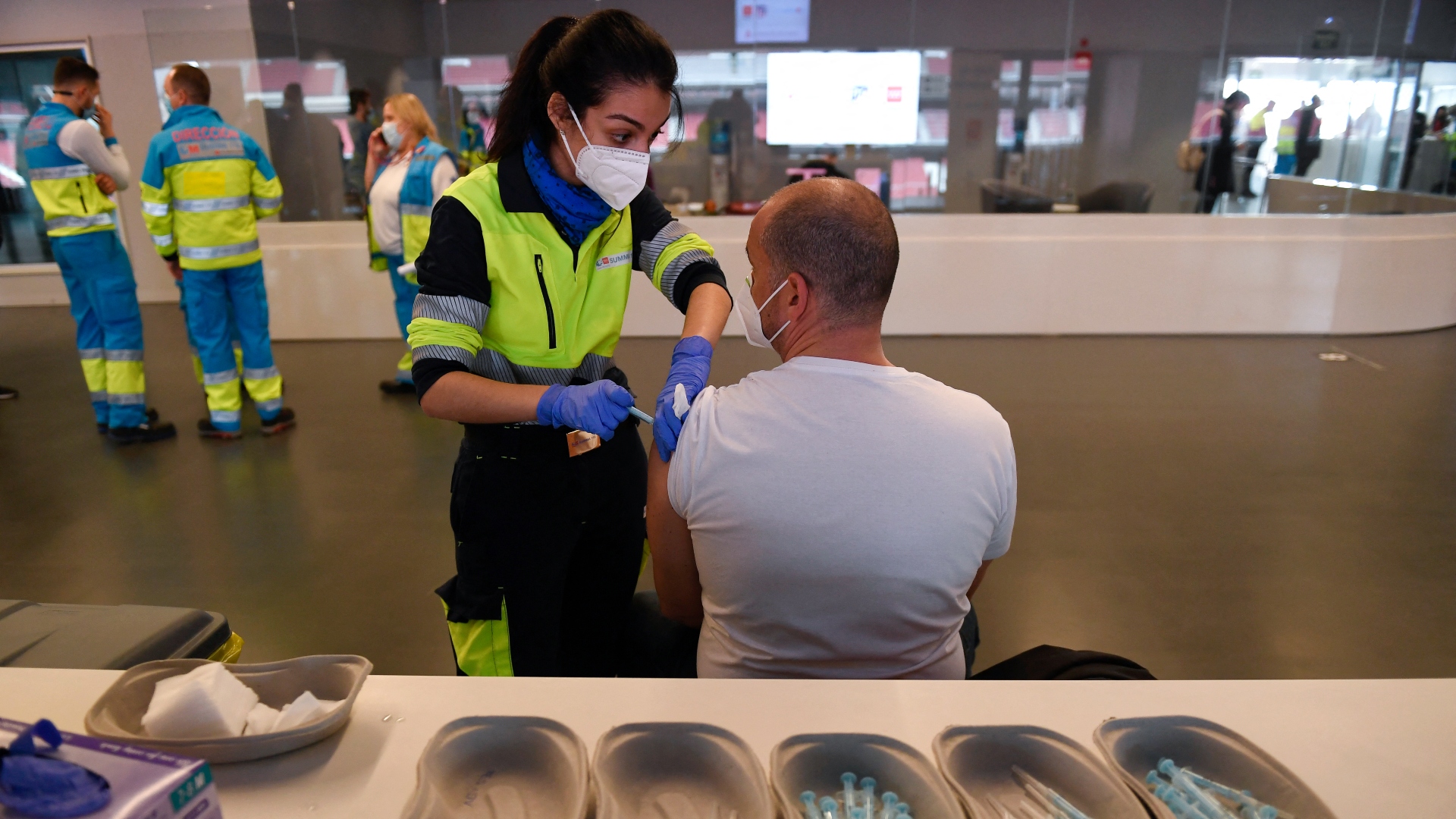 Public health experts say it's important to look at all the statistics when measuring how effective a COVID-19 vaccine is, not just efficacy data from stopping infection. /Pierre-Philippe Marcou/AFP

Public health experts say it's important to look at all the statistics when measuring how effective a COVID-19 vaccine is, not just efficacy data from stopping infection. /Pierre-Philippe Marcou/AFP

Up until now, most data on the efficacy of COVID-19 vaccines have come under controlled conditions in clinical trials, leaving an element of uncertainty over how results would translate into the real world with its unpredictable variables.

But promising real-world results have begun to emerge, as studies of vaccine effectiveness have taken place in both the UK and Israel – two of the countries leading the vaccination drives in their populations.

In Israel, a large study of the Pfizer-BioNTech vaccine in 1.2 million people was published and peer-reviewed in the New England Journal of Medicine on Wednesday February 24.

The results of the landmark study for the Clalit Research Institute showed that the Pfizer vaccine was 84 percent effective in preventing death after 27 days of the first dose, increasing to 100 percent effective after the second dose.

Other real-world data in the UK published the same week by Public Health England (PHE) came from two studies of people also vaccinated with the U.S.-German Pfizer-BioNTech vaccine, which was the first to be used in the country in early December 2020.

The data analyzed the effect of vaccinations among the elderly in one study, while the other used a cohort of vaccinated and unvaccinated healthcare workers of various age groups.

Overall, England's public health agency said the data suggest vaccinated people who go on to become infected are far less likely to die. The data were backed up by the fact that the UK is currently recording falling death rates in all age groups – but the oldest age groups, who were the first to be vaccinated, are seeing the fastest decline since the peak in mid-January.

Data showed that in those aged over 80, the risk of dying was less than half (reduced by 56 percent) in vaccinated cases compared with unvaccinated cases, at least 14 days after receiving the first dose. PHE added that in the healthcare workers, overall, deaths from COVID-19 will be reduced by more than 75 percent according to the data.

But they explained the analysis only looked at those vaccinated at least 14 days earlier and it is likely that lower rates of death would be observed in those vaccinated more than three or four weeks earlier, and even more following the second dose – as occurred in the Israeli Health Ministry survey mentioned earlier, which recorded 98.9 percent lower death rates two weeks after the second jab. 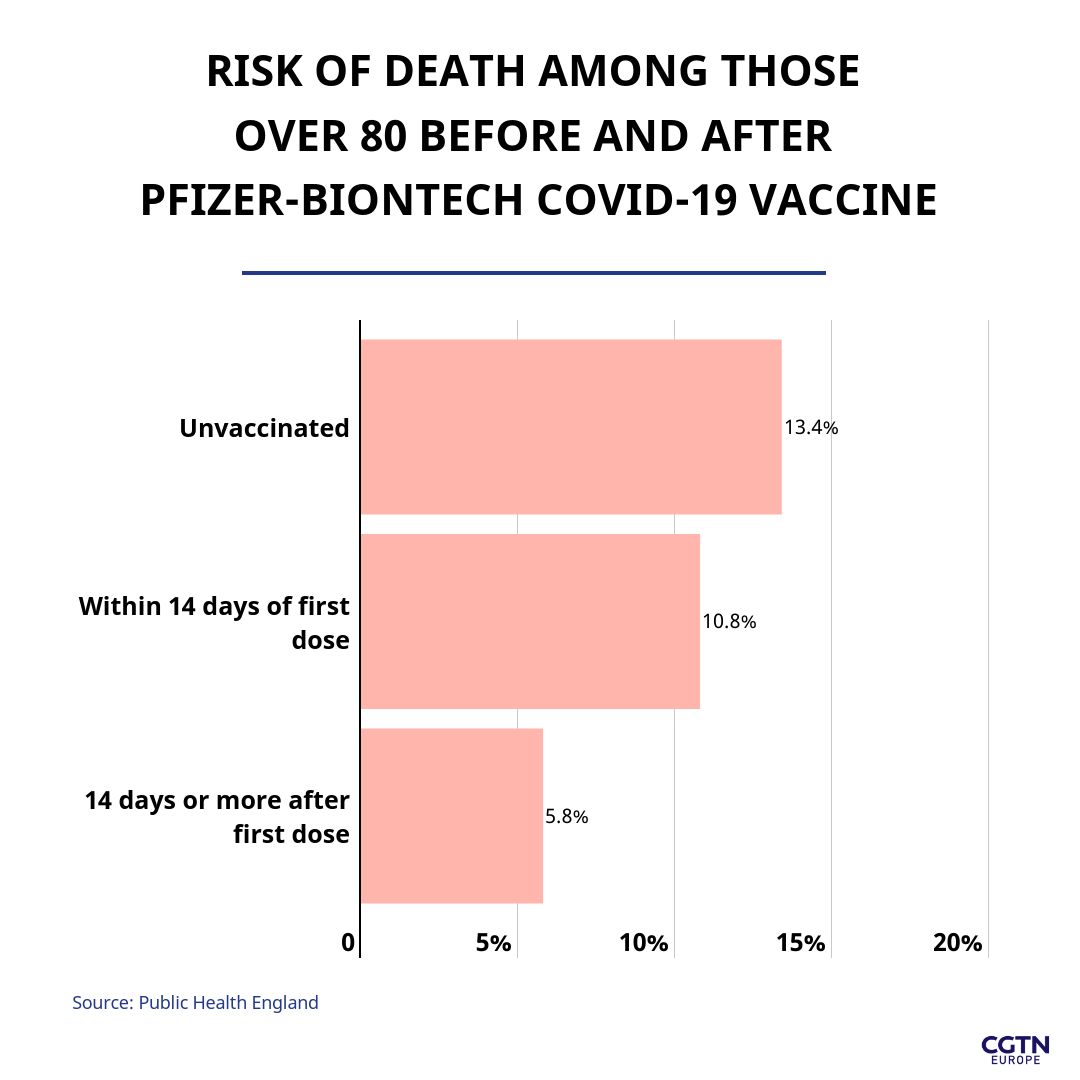 Scientists explain it is not unusual for data on vaccine effectiveness in the real world to be lower than that released following clinical trials, particularly in the case of deaths among the older populations who are more at risk.

U.S.-based Novavax, which is yet to receive regulatory approval for its vaccine, announced on March 11 that data from a late-stage trial conducted in the UK found there were no cases of severe illness or deaths among those who got the vaccine.

The same has been proved for China's CoronaVac vaccine, as Sinovac Biotech said late-stage trial data of its COVID-19 vaccine from Brazil and Turkey found the vaccine was 100 percent effective in preventing COVID-19 sufferers from dying.

Real-world data have found that COVID-19 vaccines have contributed to a substantial drop in hospitalizations and provide a high level of protection from being hospitalized due to the effects of a coronavirus infection.

A recent study in Scotland conducted by the universities of Edinburgh and Strathclyde and Public Health Scotland was released on February 22, tracking the health of 1.1 million people vaccinated with either the Pfizer-BioNTech or Oxford-AstraZeneca vaccines.

Among those aged 80 years and over – one of the highest risk groups – data showed the vaccination was associated with an 81 percent reduction in hospitalization risk in the fourth week when the results for both vaccines were combined.

In the Public Health England study of over-80s given the Pfizer-BioNTech vaccine, data after 14 days of the first dose showed that those who develop COVID-19 infection after vaccination are around 40 percent less likely to be hospitalized than someone with infection who has not been vaccinated. 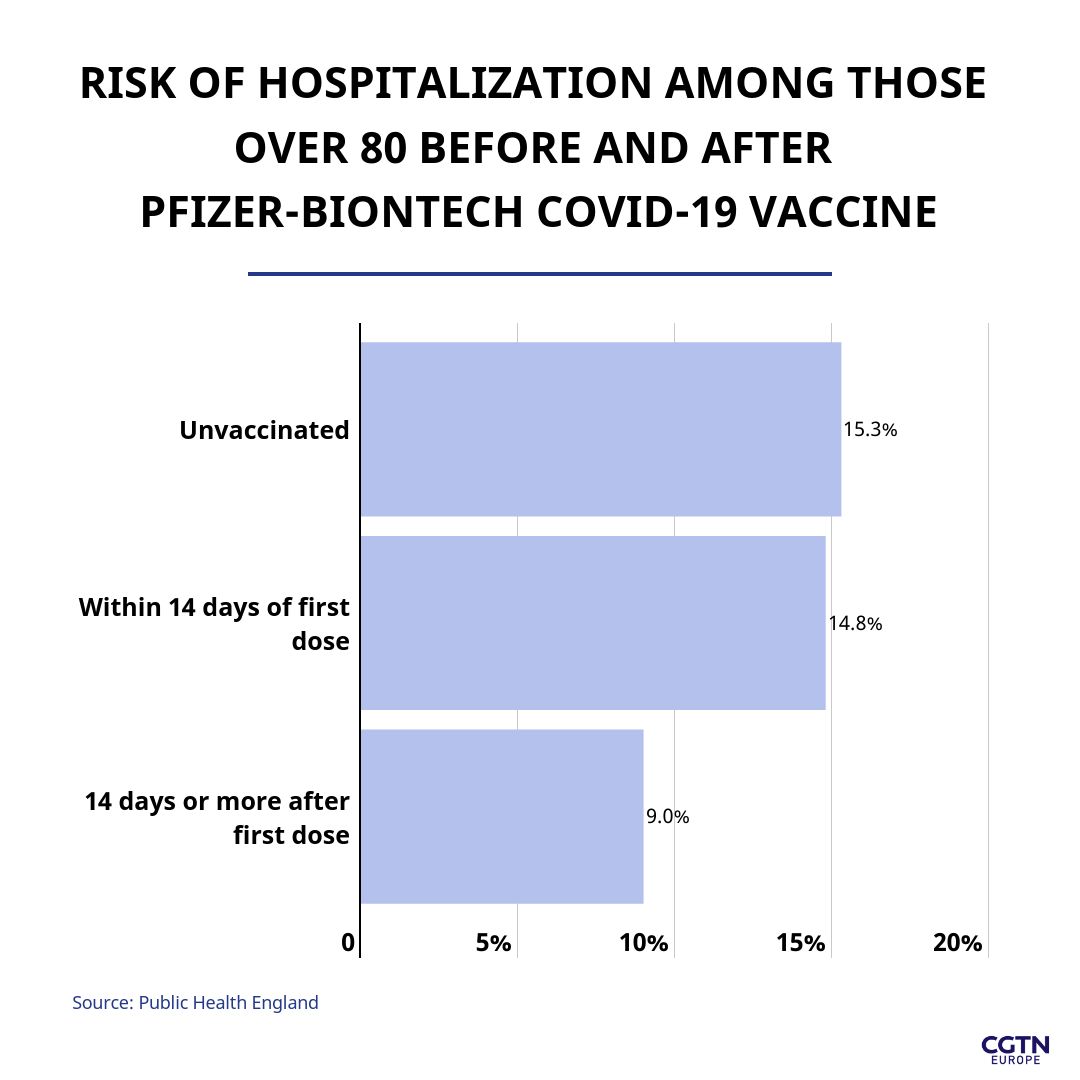 The Israeli study from the New England Journal of Medicine showed that effectiveness of the Pfizer-BioNTech vaccine against hospitalization was 74 percent up to 27 days after the first dose and 87 percent after two doses. The separate Israeli Health Ministry data suggested a 99.2 percent rise in effectiveness two weeks after the second jab. 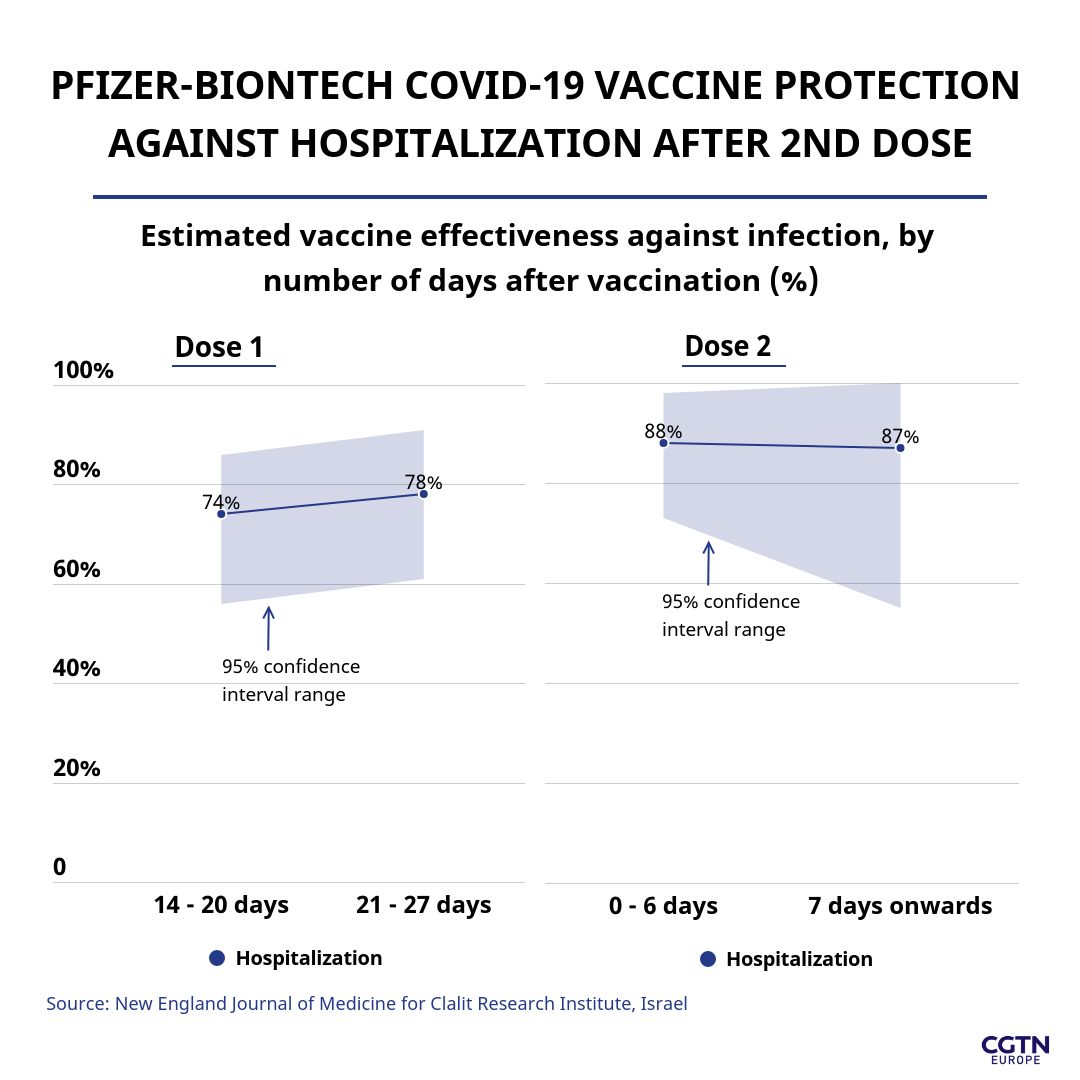 In the clinical trials of the other vaccines, including Moderna, Novavax and Johnson & Johnson, all the data showed very high to complete protection of the vaccines from hospitalization.

Data analyzed in the various real-world studies mentioned above also show that vaccines do provide high levels of protection against infection and symptomatic disease, even from the first dose.

The UK's Public Health England (PHE) study of the Pfizer-BioNTech vaccine in healthcare workers showed that one dose reduces the risk of catching infection by more than 70 percent, rising to 85 percent after the second dose. 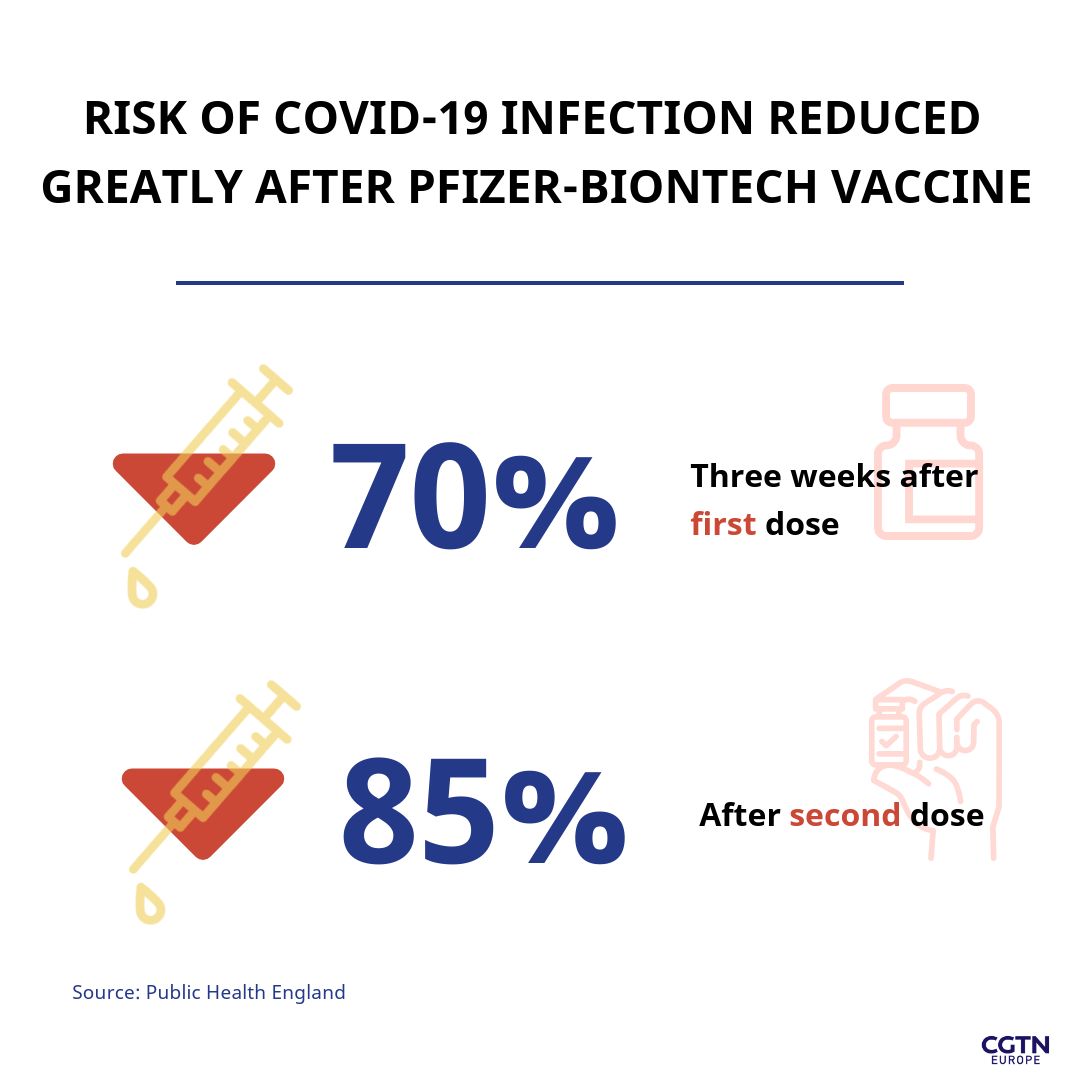 In the PHE study of over-80s, data showed that one dose is 57 percent effective against a COVID-19 infection occurring from about three to four weeks after the first dose – adding that the second dose improves protection against by a further 30 percent, to 88 percent.

The Israeli New England Journal of Medicine study found that among 600,000 people who received two doses of the Pfizer-BioNTech vaccine, 94 percent fewer people got a symptomatic COVID-19 infection compared with an unvaccinated group of the same size.

The study also showed that a single dose of the vaccine was 57 percent effective in protecting against symptomatic infections after two weeks, which rose to 92 percent after two doses. 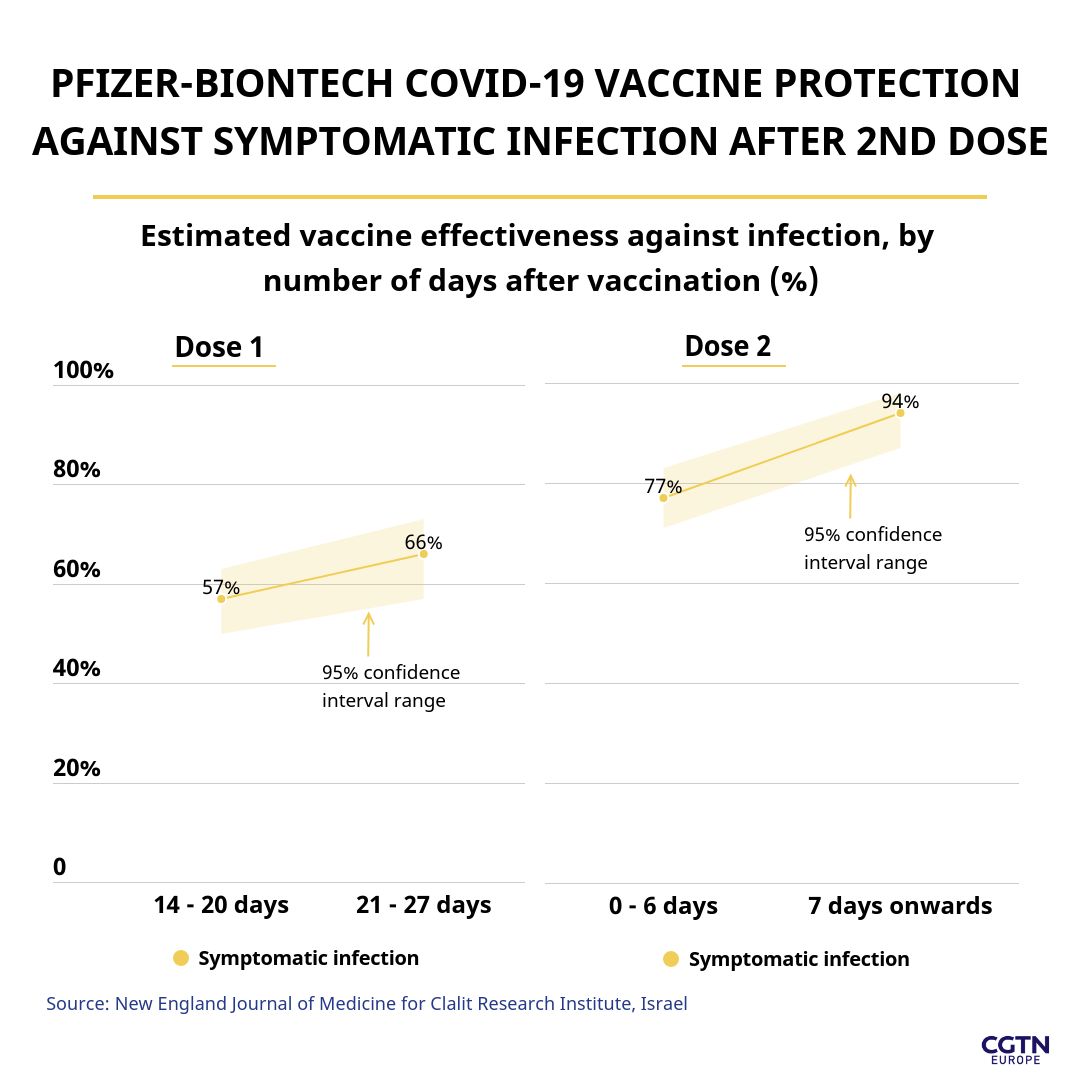 The 12,396-person study of China's CoronaVac vaccine found that it was 50.65 percent effective at keeping people from getting infected following two shots.

According to late stage trial results of Russia's Sputnik V vaccine published in The Lancet medical journal, it gave around 92 percent protection against a COVID-19 infection.