Download
Volunteer Stories: 'I want to meet the people behind the headlines'
Sunniya Ahmad Pirzada 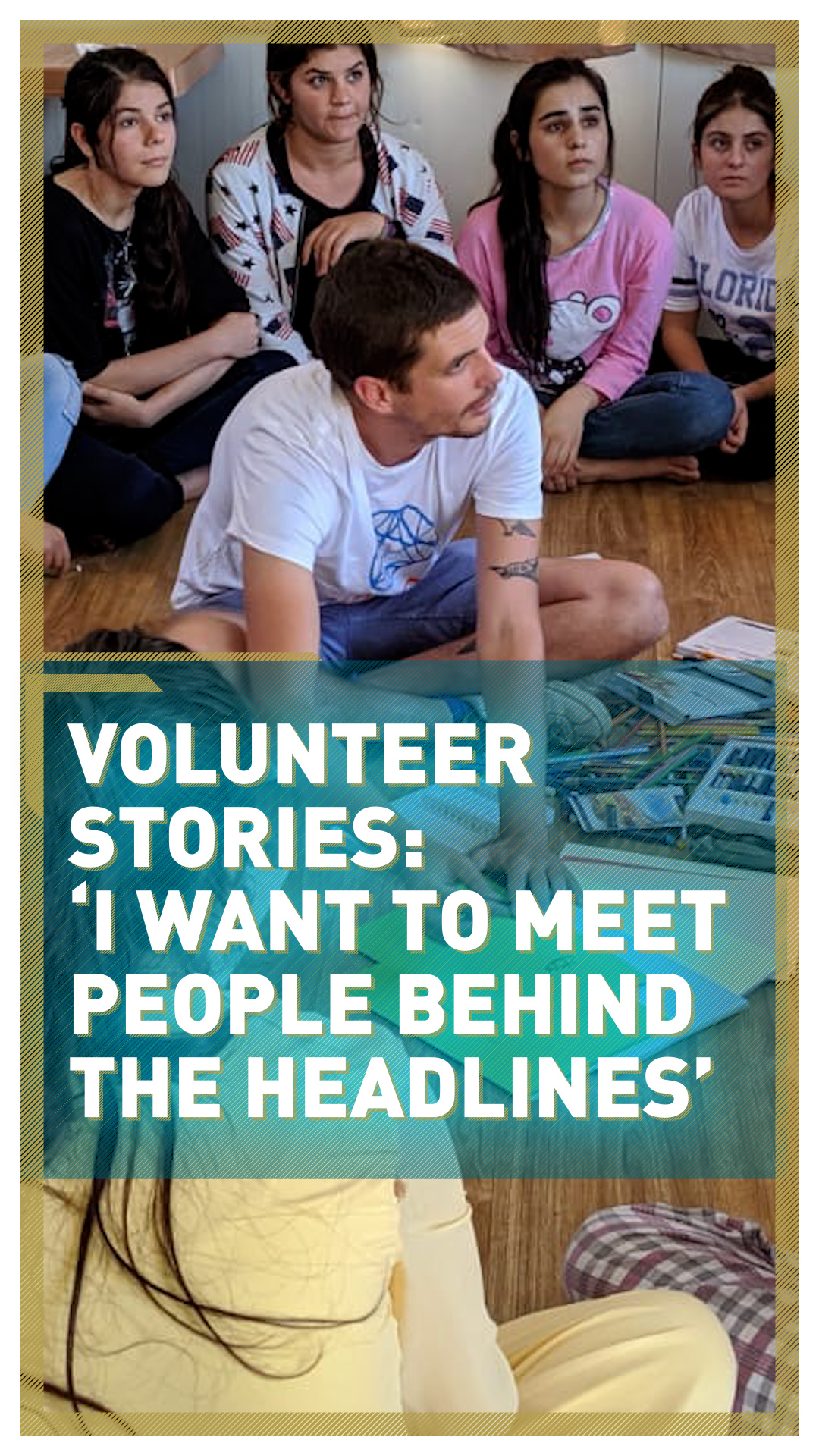 "When I went to Calais, it really changed my perspective on the world and it's kind of hard to get back to your normal life once you've been to the camps of thousands and thousands of people."

Simon Butler is the founder of Migrate Art, a contemporary art-based charity, which raises money for organizations that feed displaced and homeless people across the world.

Upon his return from the so-called "jungle" in Calais in August 2016, he started to think about how to use his experience and contacts in the art world to raise money for a better cause "than just effectively making rich people richer."

He has not looked back since then.

'Growing from strength to strength'

COVID-19 restrictions forced Simon and his team to diversify their fundraising channels as projects had to be postponed, events and exhibitions scaled right back to facilitate social distancing.

"It's been a very tough year, but we've risen to the occasion and taken advantage of the opportunities that wouldn't have been there if it wasn't for the pandemic."

His art initiative collaborated with 10 contemporary artists and illustrators to create masks, selling 2,500, as part of their #MasksForMeals campaign, the profits went to feeding the UK's homeless. 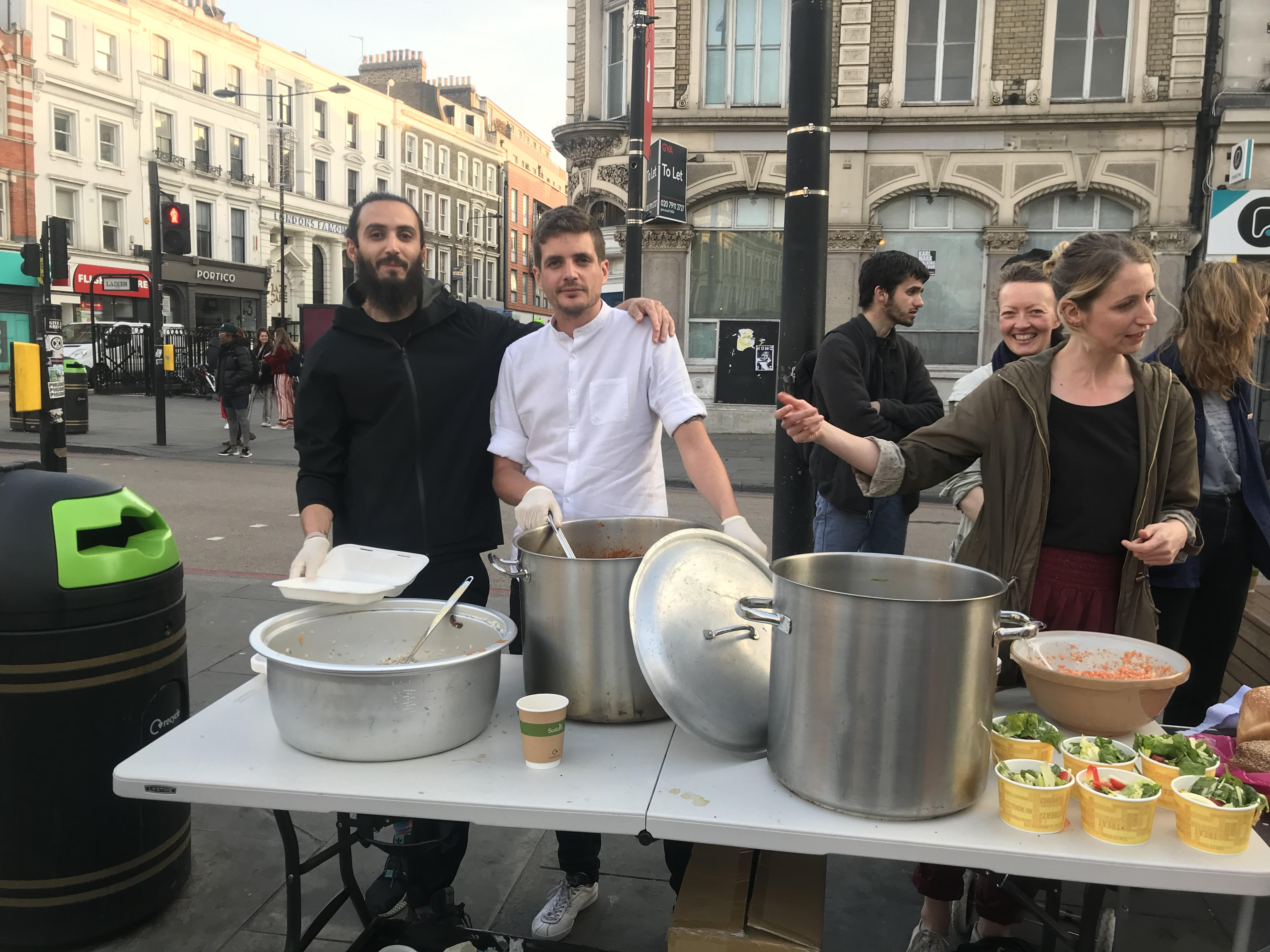 Smaller charities and non-profit organizations have been integral in serving refugees and homeless people this year. /Migrate Art

Smaller charities and non-profit organizations have been integral in serving refugees and homeless people this year. /Migrate Art

Homelessness numbers have been been on the rise, with the pandemic having further increased the figures.

According to statistics published by the Combined Homelessness and Information Network (CHAIN) in September 2020, there were 4,227 rough sleepers in London alone between April and June 2020 – a 33 percent increase on the same quarter in 2019 and a 63 percent increase from 2018.

It also reported a 31 percent rise in rough sleepers with mental health support needs – 1,220 compared with 934 a year earlier.

"These are all individual people with individual stories. And a lot of the time they're in these positions through absolutely no fault of their own, it is through war or economic issues and corrupt governments or simply because they may have made a wrong decision at some point in their life and it spiraled," says Simon.

In addition to running his own charity, he has been volunteering regularly at the Refugee Community Kitchen, feeding the refugees and homeless people in London. This year, however, he has not been able to help out as much because they had to limit the number of volunteers.

But on the days he has been out on the streets serving meals, he has noticed that, "it's not just homeless people anymore, it's families and elderly people. And the numbers of people who need a hot meal has increased substantially because we've had a hard economic year."

He is disappointed by the lack of effort from the local authorities and the government to address the issue of food poverty.

"It's fallen on these smaller organizations and non-profits that are out there on the streets. They have been integral this year and they're going to be even more integral next year. 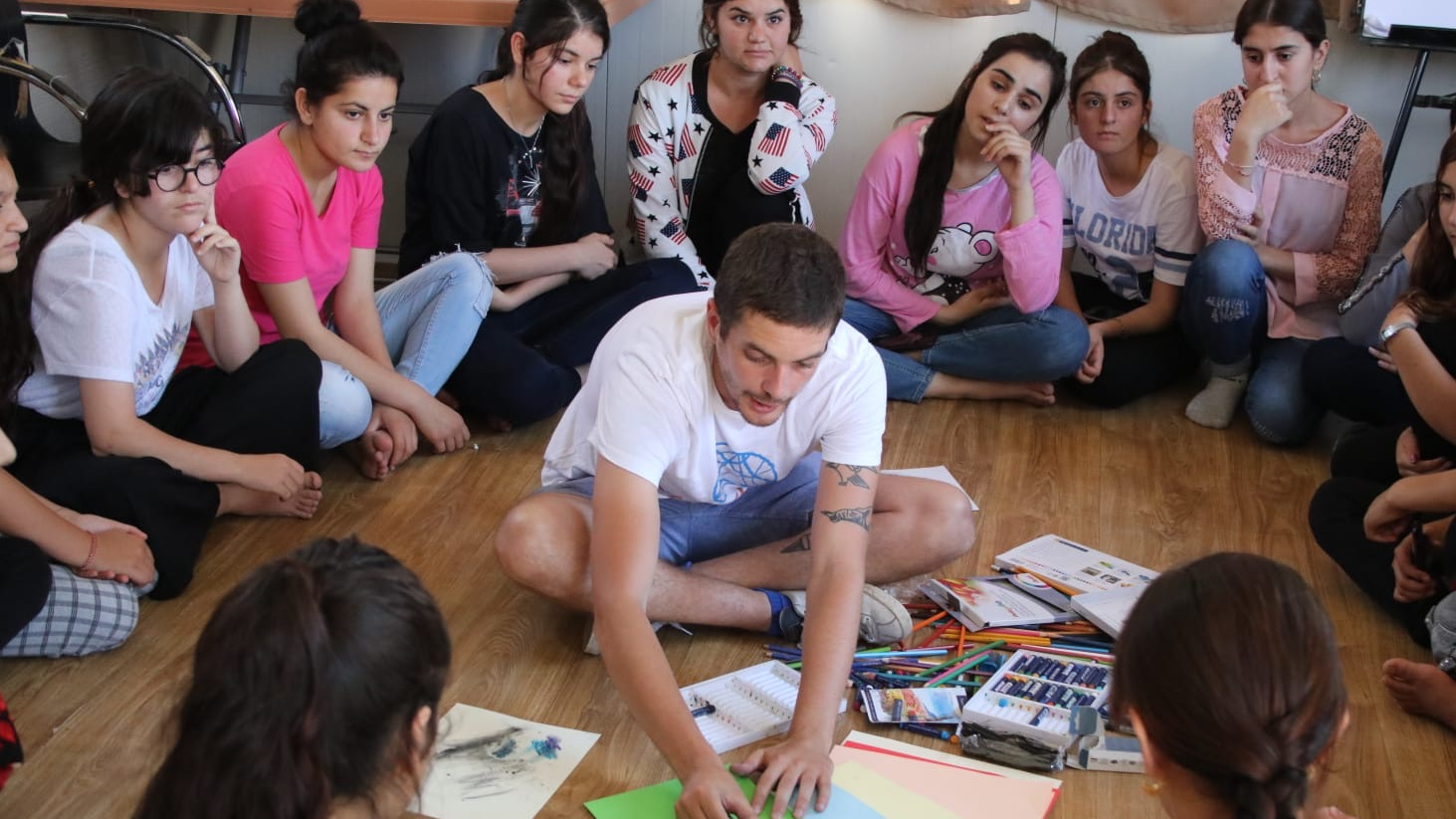 'It gives you compassion and empathy'

The need for charity organizations to continue to pick up those left behind by governments has been steadily increasing ever since Simon first started helping out refugees in Calais.

That was when he and his friend packed a van with donations – including food and clothes – and drove across the Channel.

And despite the "Jungle" having been demolished in October 2016, he has been going back regularly to serve the thousands of refugees who continue to live in satellite camps scattered across the area.

After several trips to Calais, he decided to volunteer in other parts of the world.

In the summer of 2019, he went to the refugee camps in northern Iraq's Kurdish region, with The Lotus Flower, a non-profit organization that supports women and girls impacted by conflict and displacement.

There were as many as 45,000 refugees in a camp, both Iraqi and Syrian, with safe areas allocated for women and children.

He ran art classes for the children.

"I had filled up my suitcase with pencils and pastels and all kinds of art materials and it really showed me that art is quite an incredible form of therapy," he recalls.

Some of the things the children were drawing were quite dark and revealing of the violence and the trauma they had experienced in their young lives. 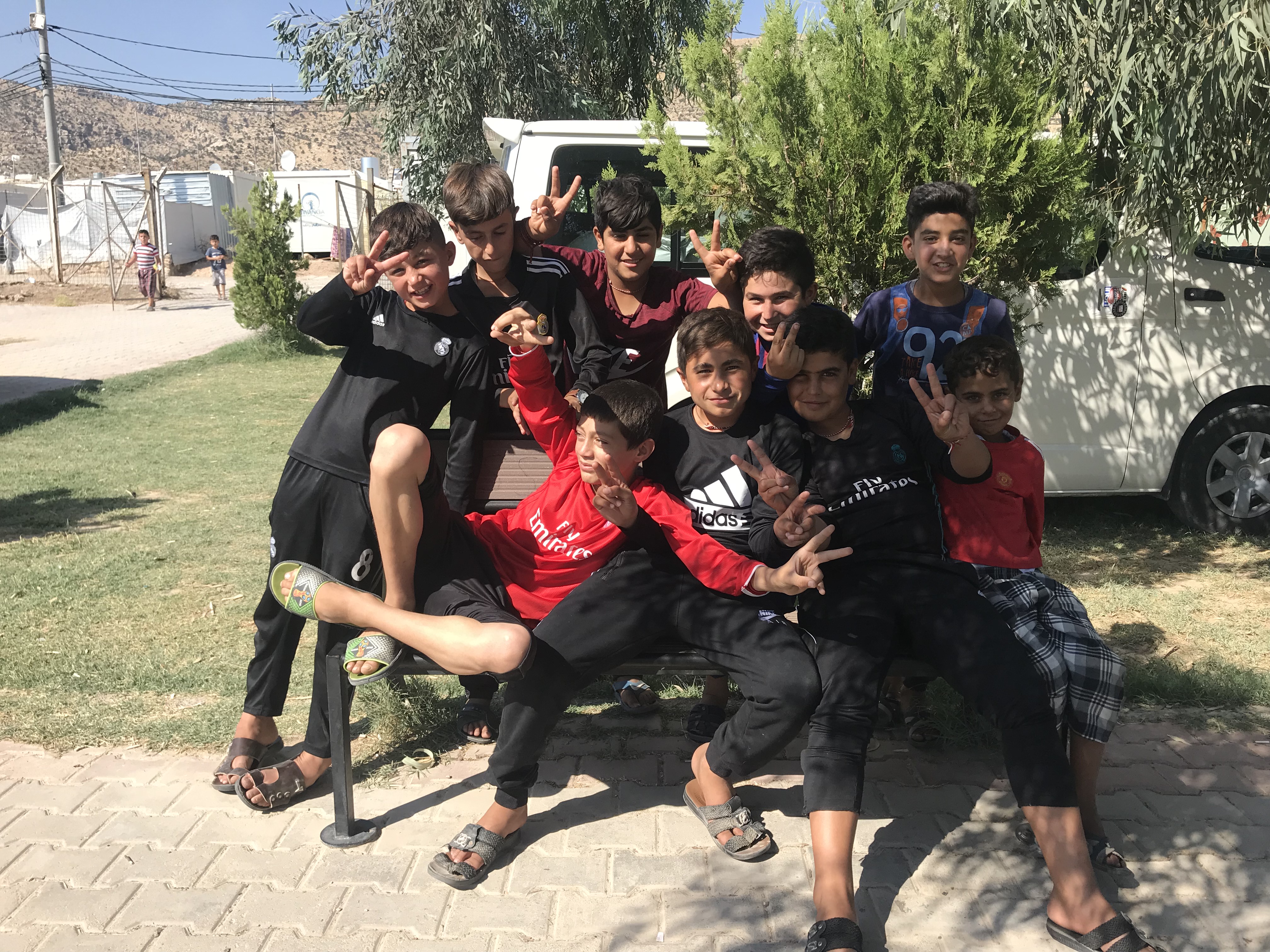 Some of the Kurdish children in Simon's art classes were drawing quite dark and violent images which was very revealing of the trauma they had experienced. /Migrate Art

Some of the Kurdish children in Simon's art classes were drawing quite dark and violent images which was very revealing of the trauma they had experienced. /Migrate Art

'It's given me purpose'

He describes his two-weeks-long stay there as "quite a bipolar experience" – the beauty of the place and its people against the darkness of the violence and the trauma they had had to endure, left a mark on Simon.

"Experiencing the trauma secondhand was difficult enough, I can't even imagine going through it myself," says the artist-turned volunteer. "It makes you question how humanity can do that to each other."

But there was a "huge amount of hope" amid all the horrors and "they were getting on with their lives and smiling again." He says it made him realize how resilient humans can be.

Simon has found volunteering to be a really transformative experience.

"It really shows you that some people dedicate their lives to other people and I think it's quite easy to forget that sometimes," he says.

Having worked in contemporary art for seven years, an industry driven by money, helping people in difficult circumstances is what he himself finds fulfilling, too. The switch may have come with a 30-percent pay cut but he says: "I have a very clear sense of why I'm doing what I'm doing."

And it has been down to keeping an open mind.

"Kurdistan was somewhere I would never have thought of going based on everything I read in the newspapers, [and saw] on TV, but I went there and had a really profound experience.

"Now I want to go and visit places that I'm being told that we shouldn't be going to [so I can] meet the people behind the headlines."