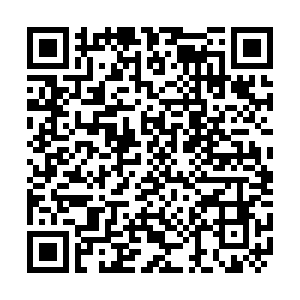 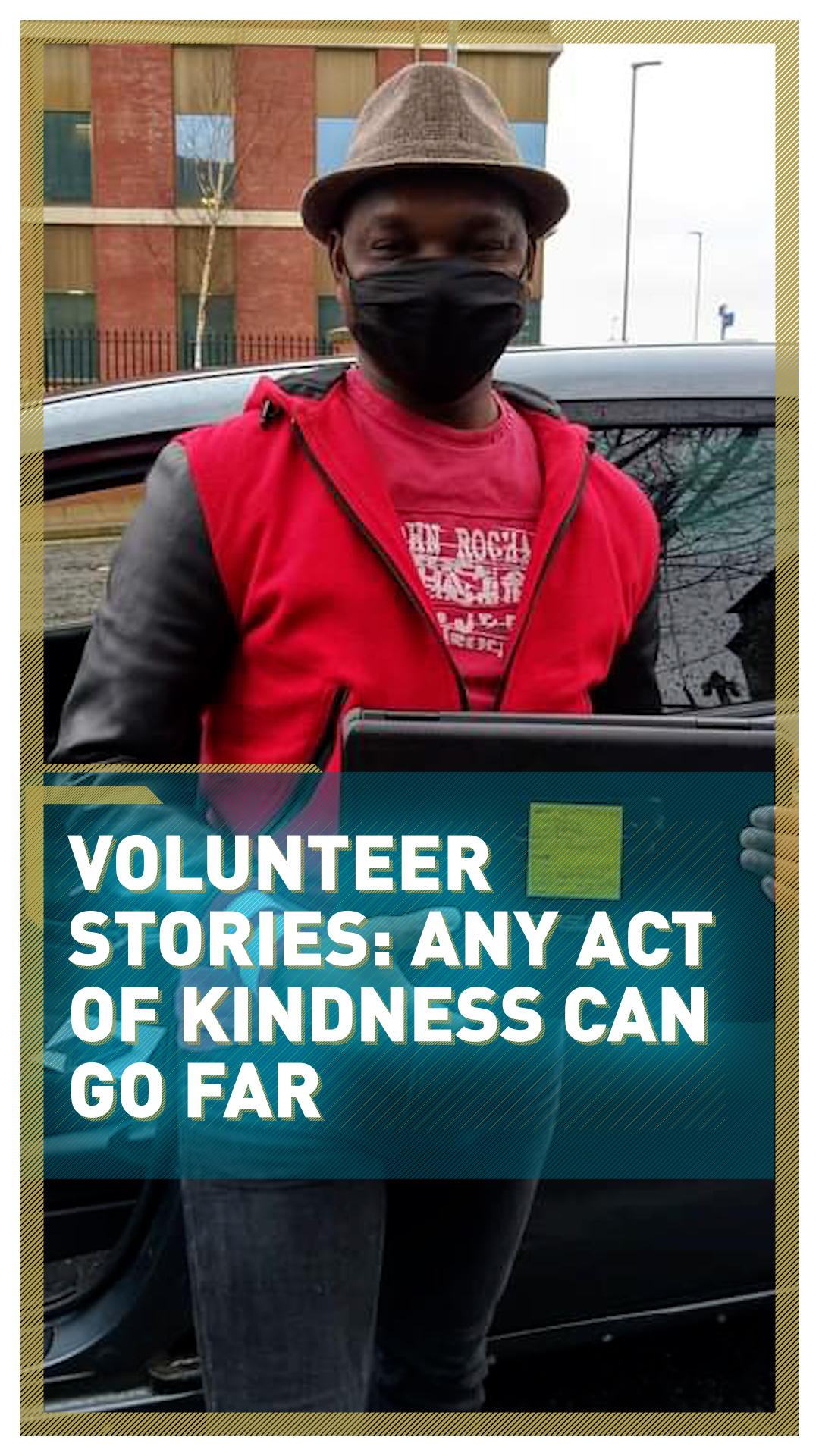 For Shams, the journey from his home in western Africa to a safe life in the UK was not without its challenges – but the hardships appear to have strengthened his spirit and infused him with endless positivity.

Shams arrived and settled in Darlington, in the northeast of England in 2017. Having spent a little over three years as an asylum-seeker, Shams is not allowed to work in the UK, a reality that has made day-to-day life for him and others in a similar situation very difficult.

He is an active member of #LiftTheBan campaign. It is lobbying for asylum-seekers' right to work in the UK so they can support themselves and their families.

Despite lack of regular work, Shams has found ways to stay busy and more importantly, do all he can to help the community.

"People coming across, they've got mental baggage, something that people don't realize. It's really challenging for them," says Shams, having experienced first-hand what it's like to arrive in a new country where he neither knew anyone nor the language, yet had no choice but to stay to keep himself and his family safe.

Many like Shams travel thousands of miles to seek safety from war, famine, violence, persecution, trafficking – their reasons for fleeing are endless, and often harrowing. 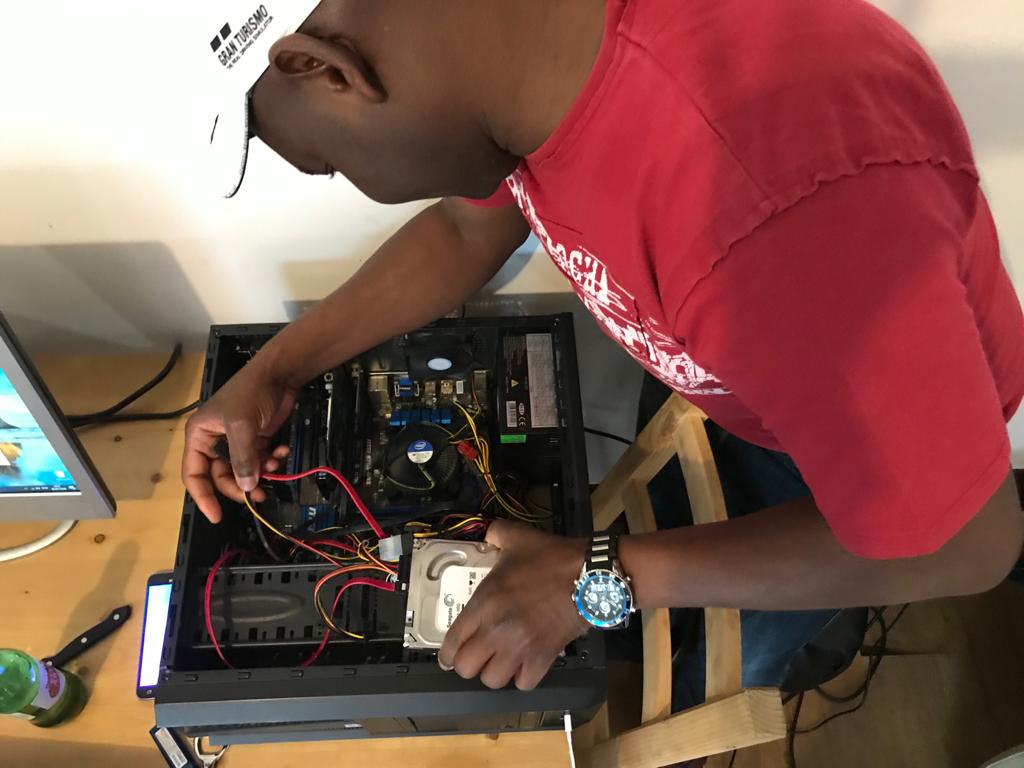 "While waiting for the Home Office to process my claim for asylum, I decided to use my time and give back to my community," says Shams. "Things that are happening are quite a little bit tormenting.

"I decided that for my mental health, for my physical health and to give back to my local community that is supporting me, the best thing to do it is to volunteer."

Shams started volunteering at the local community center, using his IT expertise, fixing computers and resolving IT issues for the staff and community members. He soon found himself volunteering for a range of national and local charities like Food for Thought, British Red Cross, More in Common and City of Sanctuary to name a few.

"I will roughly count about seven charities that I'm volunteering individually, in addition to helping people around in town," says Shams with a glint in his eye.

It has afforded him the opportunity to socialize with people from different backgrounds and integrate in the community, something he recognizes is not easy for other asylum-seekers as language is often a barrier which stands in the way of developing social connections.

"I think one of the things that we're doing with the More in Common is to give people access to English classes, so that they can better integrate in their communities," explains Shams. "The RAS communities [Refugees and Asylum Seekers] often come across the language barrier even if it's a visit to the GP or to the local places like the supermarket." 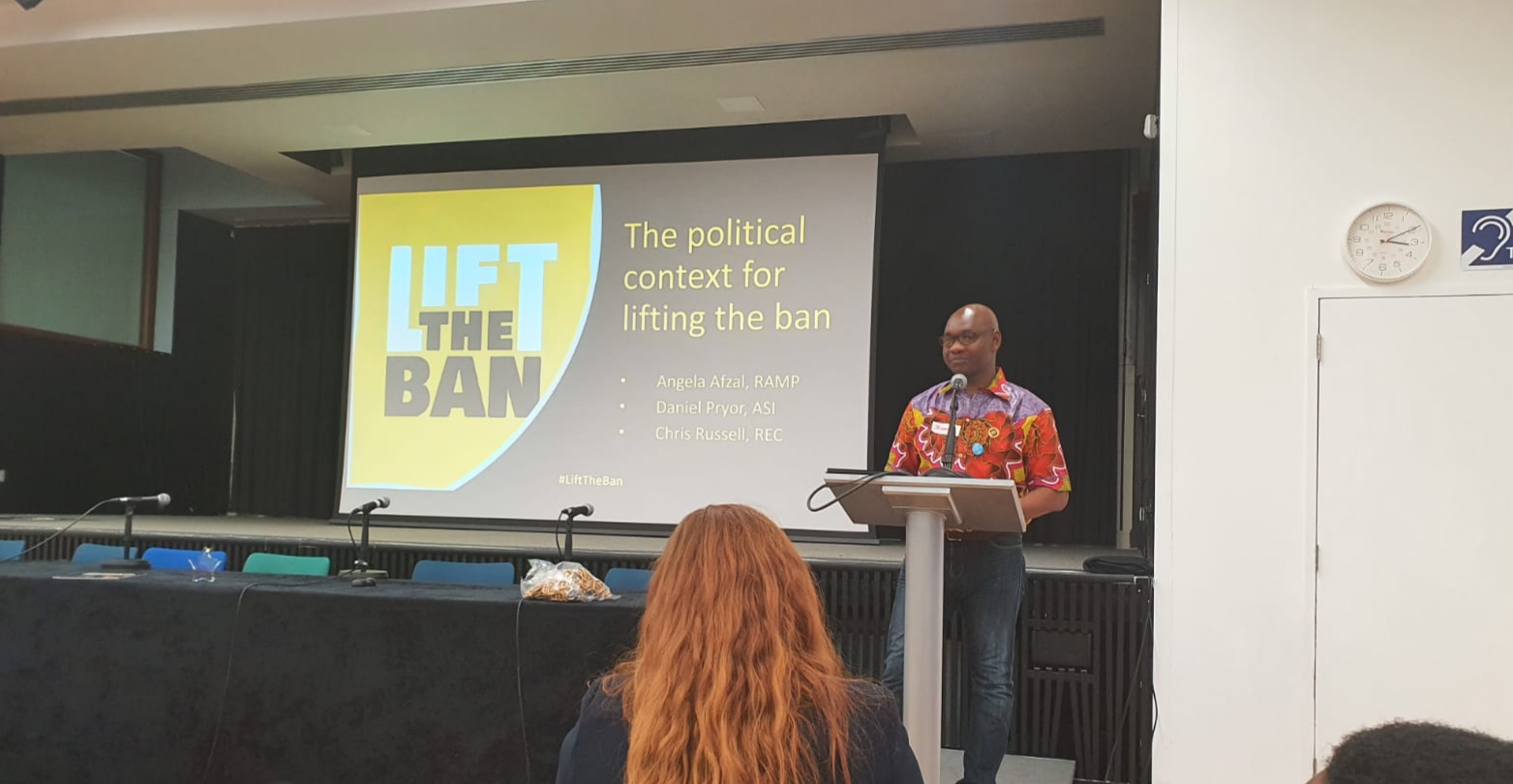 There are many like Shams who have endured a similar journey to his. /Shams

There are many like Shams who have endured a similar journey to his. /Shams

'Volunteering can give you the will to carry on'

Fortunately, Shams has had the motivation to push himself and make the most of his time and skills while waiting for the outcome of his asylum application. During his efforts to integrate into the community, he found many people "welcoming" but some "a little bit distant."

"Because let's be honest, you know, we have all known about the racial inequalities and everything that exists," explains Shams. "Luckily, I was asking and knocking on the right doors and once you start something, it's like a chain reaction. I'm now also volunteering with Doctors of the World, which is basically an organization that helps asylum-seekers to access healthcare, which is not easy for them."

Shams says he is surrounded by people who have endured a similar journey to his, navigating far more than just the expanse of the desert or the choppy waters of the Mediterranean, losing friends and family along the way.

"But they're still here," says Shams. "And they're trying to give back to the local community and saying to themselves, 'Yeah, I can do this. I owe it to the people I have lost and to the community that is supporting me.'

"You've got asylum-seekers providing food parcels for other asylum-seekers and refugees and some are also sharing their mobile data because they know it's really important for people to stay in touch [during this pandemic]." 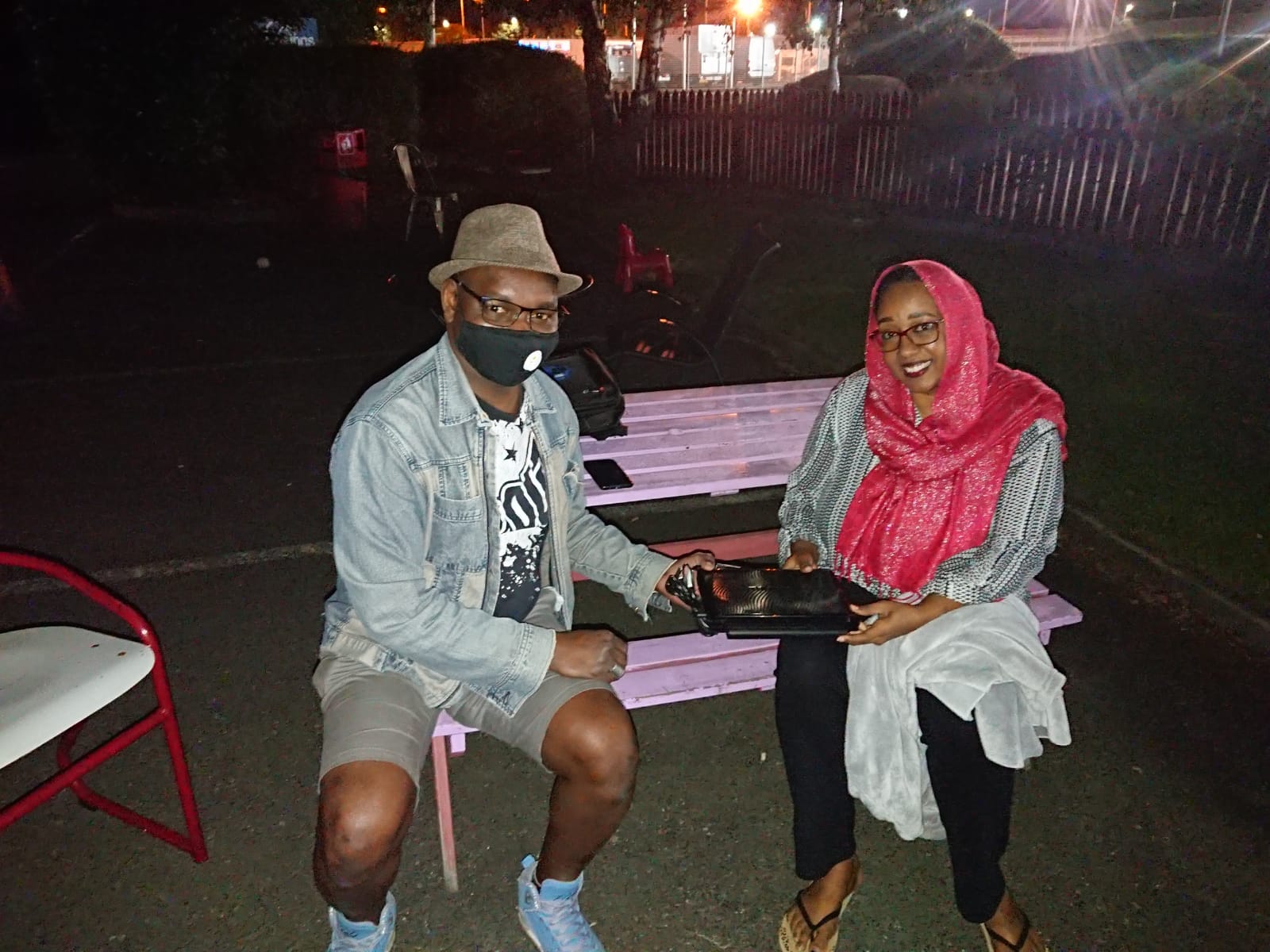 Shams has been involved in a community IT project to refurbish old and disused electronic devices which are donated to those who need them. /Shams

Shams has been involved in a community IT project to refurbish old and disused electronic devices which are donated to those who need them. /Shams

'When we come together, there is nothing we can't accomplish'

Shams recognizes that it doesn't matter where you are in the world, 2020 has been a very challenging year all around. Some of these challenges are far too familiar to the refugees and asylum-seekers.

"And it has brought out the reality of the cracks that are in our society, as everyone would know, such as the digital exclusion and also the loneliness that people are facing."

Shams has been involved in a community IT project to refurbish old and disused electronic devices – phones, tablets and laptops. After giving them a much-needed service, he gives them to local families, helping children to access online education and families to stay in contact during the lockdown.

"So far I have donated these devices to 50 families," a beaming Shams tells CGTN, but he is reluctant to take all the credit. "It's down to the generosity of the local people who have donated all the devices. You may have an old device that you're not using so we take it, refurbish it and give it to a family that needs it.

"I recently overhauled a laptop donated by a gentleman. We usually take photos, following the data protection rules, to show the donors that their devices are given to actual people," explains Shams. "In this instance, the gentleman was so touched to see that a girl who had had to out miss on online learning at the beginning of the pandemic as she didn't have a computer, will now be able to catch up on her studies.

"He said to me: 'I hope this laptop encourages her to study, just like it motivated my daughter and she has gone on to become a doctor, using this laptop,' and I was really moved."

The digital gap that exists within communities has come to the fore during the pandemic. (Photograph cropped for data protection) /Shams

The digital gap that exists within communities has come to the fore during the pandemic. (Photograph cropped for data protection) /Shams

'Any act of kindness can go far'

There are plenty of smiles and touching encounters that make Shams want to do more for others whilst also distracting him from the uncertainties of his future as an asylum-seeker. He has worked hard to earn the trust of the charities and the community and carved out an identity for himself.

"One mother told me: 'My daughter couldn't sleep when I told her that her laptop was coming.' The girl was waiting at the door and as soon as we gave her the laptop, she was crying and said 'it's like Christmas morning,' which is heartwarming," says Shams.

As people continue to lose their lives and livelihoods due to COVID-19, Shams has seen a greater need for volunteering to address people's struggles with food poverty and mental health issues.

He had already been volunteering at one food bank before the start of the pandemic but has since started helping out at another, No Questions Asked (NQA), an initiative that has been set up in recent months. It welcomes at least 200 people, in need of a meal, through its doors daily.

"They [NQA] have been assisting not just the people seeking asylum, but also the locals in the community. It's really tight, it's difficult," says Shams. "It's challenging not just physically but also mentally. I wonder how people will get food and they do not have access to counseling or anything.

"They are losing the hope due to the pandemic and some of them [refugees and asylum seekers] are only allowed to live on five pounds 50 pence [$7.50] a day. The Home Office refuses to give them more, they do not even have six pounds [$8] a day to live on and it includes their food allowance.

"So when they go to the supermarket, they end up putting some of the food items back on the shelves because they can't afford them."

But nothing can dampen Shams' optimism and he believes we can pull through the most difficult of individual and collective times, if we stick together.

"There is nothing we cannot accomplish if we come together," says the multi-charity volunteer. "But if we start standing aside and not helping one another in these difficult times then what's the point of being human?"