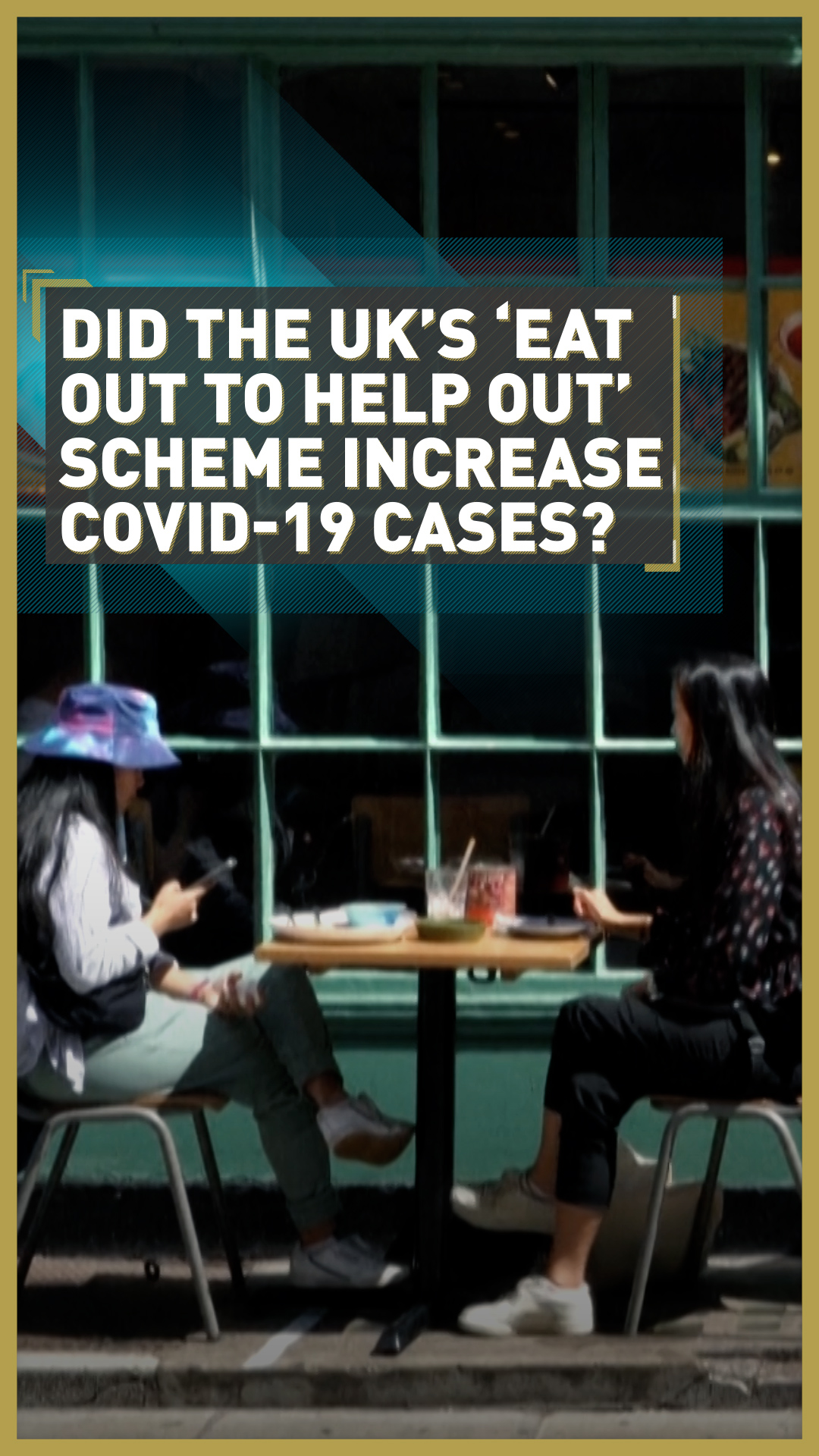 The UK government's $658 million 'Eat Out to Help Out' scheme, which offered diners 50 percent off meals on Mondays, Tuesdays and Wednesdays in August, drove up new COVID-19 infections by between 8 and 17 percent, according to new research.

Rolled out by the UK's finance minister, Rishi Sunak, the scheme intended to incentivize people to spend money on eating out following the first lockdown from March to July, in a bid to boost the struggling economy and especially the hospitality sector.

But a study by Thiemo Fetzer, of the CAGE Research Centre in the University of Warwick, found that while participating restaurants recorded an increase in visits of between 10 percent and 200 percent compared with 2019, up to 17 percent of the newly detected COVID-19 infection clusters in August and early September can be attributed to the scheme.

In the paper, titled Subsidizing the spread of COVID-19: Evidence from the UK's Eat Out to Help Out scheme, Fetzer said the scheme "has had a large causal impact in accelerating the subsequent second COVID-19 wave."

The research used data from the UK government's own restaurant finder app – which was the go-to platform for people searching for participating restaurants in their neighborhood – together with weekly data on new COVID-19 infections.

"What we see is that places that had higher participation in the program from the side of restaurants … [is] that there's a notable increase in infections roughly one week after the scheme started and that continues into the three, four weeks that the scheme was running, and then sort of within early September, you see a notable decline in infections in places that had high uptake of the program," Fetzer told CGTN Europe. The scheme gave diners a maximum of $12 off per person on the bill, leading to a massive increase in seated diners. /Alberto Pezzali/AP Photo

The scheme gave diners a maximum of $12 off per person on the bill, leading to a massive increase in seated diners. /Alberto Pezzali/AP Photo

In order to demonstrate the causal connection between the scheme and an uptick in cases, another bit of the analysis involved analyzing rainfall data and granular mobility data from Google's Community Mobility Reports.

"And what we see is that if we look at rainfall just within the hours of lunch and dinner time, so between 11 a.m. and 1 p.m. and 5 p.m to 8 p.m or 9 p.m. in the evening ... there are notable lower numbers of restaurant visits happening in places where it rained during lunch and dinner time," Fetzer said.

"The places that during Eat Out to Help Out days, which is Monday to Wednesday, did experience notable rainfall, but only during the lunch and dinner hours saw subsequently less infections," he explained.

While the scheme may have shown some positive economic impact, it was short-lived, as visits to restaurants started to decline after the scheme ended. 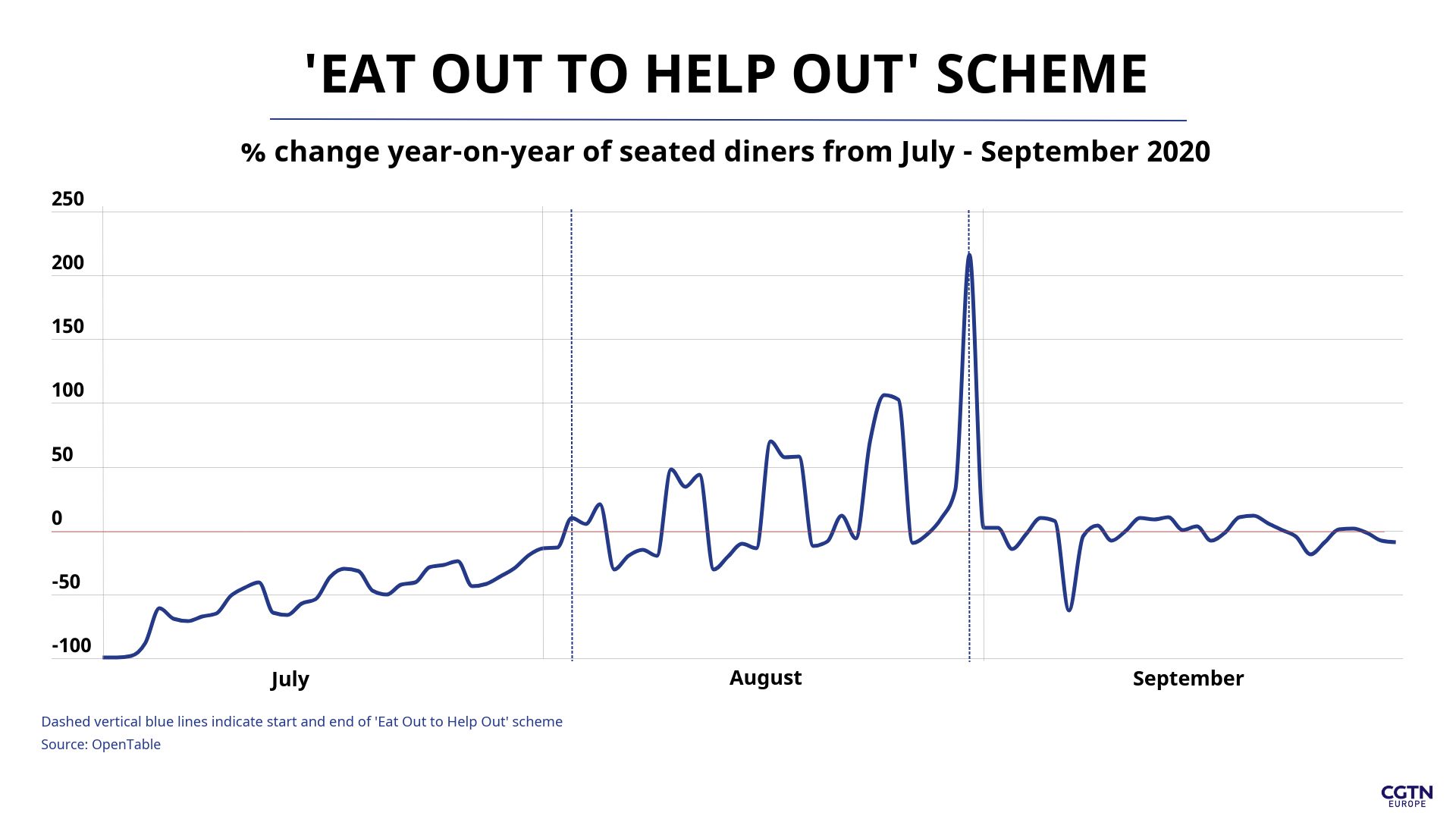 The scheme, which took place between August 3 to 31, from Monday to Wednesday, offering a maximum discount of $12 per person, proved to be a hit across the country as the number of people in restaurants, cafes and pubs had increased dramatically.

However, according to Fetzer, at the time, economists and epidemiologists had warned the government that the policy was a risky gamble, as it concentrated a lot of restaurant dining activity within a few days in a week, contrary to social distancing regulations or rules on mixing households, which were considered a risk factor for the spread of the virus.

"So policymakers, they're drawn to this idea that there's a trade-off between helping the economy and saving lives – this is a false trade-off," Fetzer explained.

"What we see, as soon as infections started rising in early September, notably, people stopped eating out. So the immediate response to this perceived risk is to adjust people's consumption patterns. So the problem that hurts the economy is the virus, not any sort of mitigation or containment measures," he added.

For Fetzer and other researchers and economists, the focus of the government should not stray away from effective mitigation containment measures – which they say are in fact good for the economy – in an attempt to reinvigorate failing sectors. Instead, it should focus on compensating sectors that increase the risk of disease spread and shutting them down for the common good.