President of the European Commission Ursula von der Leyen labeled China a "competitor and a rival" as she delivered her first annual State of the Union speech on Wednesday.

Von der Leyen's address reflected on a tough 12 months and outlined the bloc's aims for the next year regarding climate change, COVID-19, relations with China and Russia and Brexit. 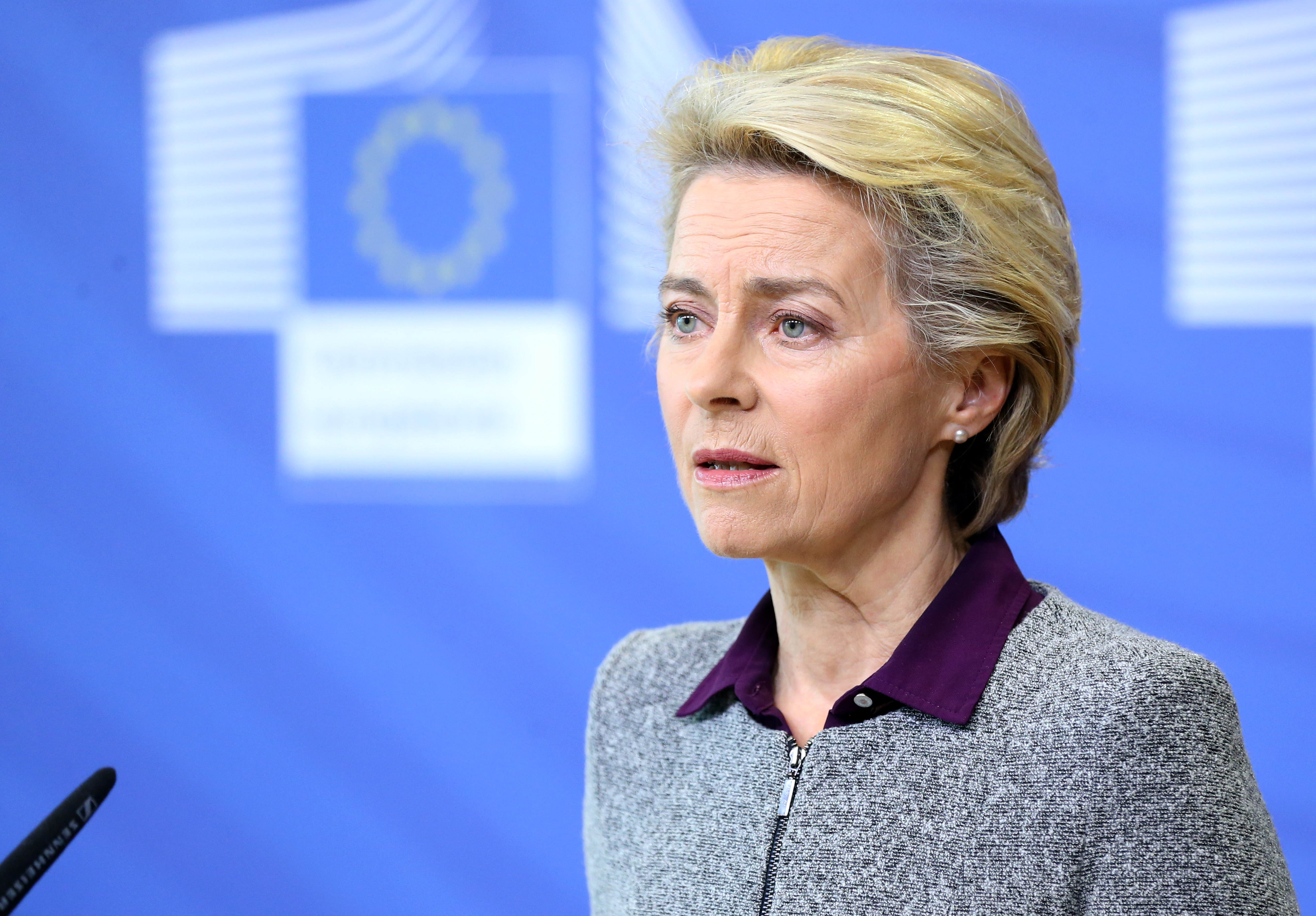 President of the European Commission Ursula von der Leyen gave her State of the Union Speech on Wednesday, outlining the aims of the EU over the next 12 months. /AFP

President of the European Commission Ursula von der Leyen gave her State of the Union Speech on Wednesday, outlining the aims of the EU over the next 12 months. /AFP

On Monday, Von der Leyen was part of an EU party that held talks with Chinese President Xi Jinping during the latest China-EU summit to map out the finer details of their future relationship.

After the talks, which she summed up as "frank and open," Von der Leyen said progress had been made on a host of key areas and hailed the potential of a fruitful future trading partnership with China but admitted there was still much work to be done.

China responded by urging the EU not to meddle in domestic issues, following its condemnation of the new national security law in Hong Kong. Xi said: "China firmly opposes any person or force creating instability, division and chaos in China, and meddling in China's internal affairs by any country."

Von der Leyen used her speech to again address the challenges both sides face in working together in the years ahead in spite of their conflicting political ideologies.

"The latest EU-China summit highlights one of the hardest challenges," she said. "China is a competitor and rival. We promote very different systems."

This year, the EU must update its long-term climate change goals to meet the targets laid out in the Paris Climate Agreement, which aim to make the continent carbon neutral by 2050.

There is pressure from MEPs for the EU to set more ambitious goals and reduce carbon emissions by 55 percent by 2030, but the bloc could face difficulties finding a collective agreement among its 27 member states.

But Von der Leyen says she remains confident of hitting targets and says the EU's Green Deal, which aims to build a sustainable economy, will be key to lasting change.

"The climate has continued to get hotter and we see the consequences – from Mont Blanc to crops destroyed in Romania," she said. "We cherish green space, we know change is needed. The European Green Deal is our blueprint for change.

"We've looked at our 2050 goals and held widespread consultation; we propose to reduce emissions by at least 55 percent by 2030. If others follow our lead, we can meet Paris accord goals.

"We resolve to meet this target. It will create jobs and more than halve air pollution. We must adapt energy policies. The Green Deal is about more than cutting emissions and 37 percent of the Next Generation EU budget will be spent directly on Green Deal projects."

Von der Leyen also called on China to do more to aid the world's collective fight against climate change. "China has shown willingness to dialogue on climate change but must live up to its Paris accord promises."

· Chinese blockbuster "The Eight Hundred released" in UK and Ireland

EU countries have been hit hard by the COVID-19 pandemic and there are fears a second wave of the virus over the winter months will heap more misery on member states.

But Von der Leyen says the EU has much to be proud of in terms of its response to the pandemic and continued efforts to cooperate with other nations to find a vaccine.

She said: "The EU stepped up to lead the global response. With civil society, G20 and the World Health Organization and others we brought more than 40 countries together to raise $19 billion to finance research on vaccines, tests and treatments for the whole world. This is the EU's unmatched convening power in action."

But she also warned of the dangers of countries not working together on vaccine research, with the U.S. recently announcing its plans to withdraw from the WHO.

"Vaccine nationalism puts lives at risk, only vaccine cooperation saves lives. We need a strong WHO and a strong WTO – but reform of the multilateral system has never been more urgent. Our global [health] system has fallen foul of a creeping paralysis as major powers pull out.

"I want the EU to lead reforms of the WHO and WTO."

The numbers of migrants and refugees crossing into Europe from Asia and Africa has fallen dramatically since the 2015 crisis, but it remains an issue of concern for the EU.

Several EU countries, notably Greece and Turkey, have made concerted attempts to prevent migrants and refugees from entering their countries.

Von der Leyen says it's of vital importance that the EU's member states work together to share the burden of taking in migrants and refugees and providing them with the tools for a brighter future.

She added: "Next week, we will put forward the New Pact on Migration. We'll take a human and humane approach. Saving lives at sea is not optional and those countries that fulfill their legal and moral duties or are more exposed than others, must be able to rely on the solidarity of our whole EU.

"We will take action to fight smugglers and strengthen external borders. We will make sure those allowed to stay will be welcomed."

Von der Leyen added: "We are working with Greece on a new camp on Lesbos. I expect all member states to step up, too. Migration is a European challenge and the whole of Europe must do its part."

Donald Trump's desire to leave the WHO and Russia's alleged involvement in the poisoning of opposition politician Alexei Navalny, have provided the EU with diplomatic challenges.

But Von der Leyen remains hopeful of improving relations and believes common ground can still be found, despite their current differences.

She said: "We must revitalize our most important relationships – we may not agree with the White House, but we must cooperate and build a new transatlantic agenda on trade and other matters.

But Von der Leyen also reiterated her condemnation of Russia over Navalny – though the Russian government has strongly denied any involvement – and said the EU supports the people of Belarus and their desire for a democratic future.

"On Russia, the poisoning of Alexei Navalny is out of order. This pattern of electoral interference etc... is not changing.

"The European Union is on the side of the people of Belarus. They must be free to decide their own future, they are not pieces on someone else's chessboard."

Another key focus for the EU between now and the end of the year is concluding Brexit negotiations with the UK.

The terms of a potential trade deal must be finalized by 15 October but have been complicated by the UK's attempts to rewrite parts of the Withdrawal Agreement.

"The emotional goodbye to the UK by singing Auld Lang Syne showed our attachment," she said.

But talks on future ties are difficult. We worked line by line, word by word on the Withdrawal Agreement, it secured citizens' rights and the Good Friday Agreement. We will defend this, it was ratified and we will not let it be changed.

"As Margaret Thatcher said, we do not break international treaties."