Chinese and US ambassadors to Poland spar on Twitter
Alec Fenn 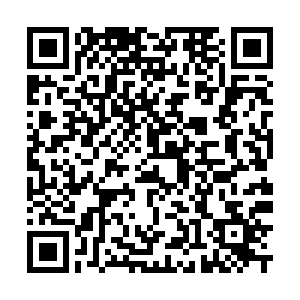 Social media has become a political battleground and, as tensions between China and the U.S. have mounted, Poland has emerged as a front line.

Ambassadors for the two countries in Warsaw, who both took up their posts in 2018, have been sparring on Twitter for the past two months.

Following colleagues around the world, career Chinese diplomat Liu Guangyuan joined the platform in March this year and, like U.S. counterpart Georgette Mosbacher, posts both in English and Polish.

Poland, which notably hosted talks in 1958 that led to American recognition for the government in Beijing, has been a traditional ally of Washington due to its leading role in NATO.

However, the coronavirus pandemic, China's economic rise and Donald Trump's anti-globalist position have shaken up the world order. 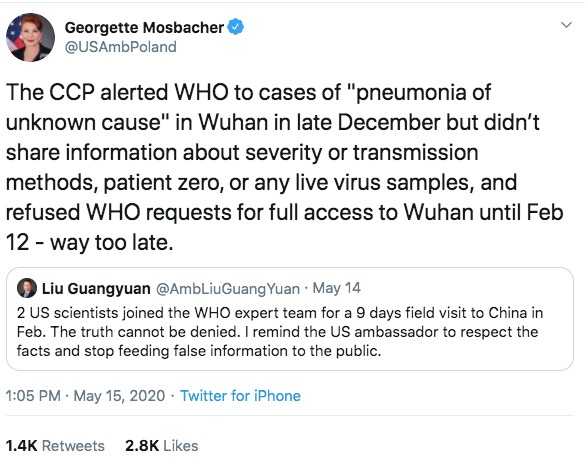 Georgette Mosbacher has repeatedly accused China of being responsible for the global outbreak of COVID-19. /Twitter

Georgette Mosbacher has repeatedly accused China of being responsible for the global outbreak of COVID-19. /Twitter

The exchanges between the pair began to escalate in March after Mosbacher retweeted a statement from Morgan Ortagus – spokesperson for the U.S. state department – which criticized comments made by Chinese foreign ministry spokesperson Hua Chunying.

Liu responded by retweeting an article from Hua, which claimed the U.S. government was pushing officials to criticize China. He also added an additional comment, which read: "Blaming others won't make U.S. great again."

In the ensuing weeks Liu accused U.S. politicians  of behaving "disgracefully and immorally"  and said the government was "spreading political viruses."

Most recently, on 15 May, a few days after Donald Trump responded to a critical question from a reporter by urging her to "ask China" about its handling of the pandemic, Mosbacher retweeted a video of U.S. Secretary of State Mike Pompeo accusing China of unspecified "concealment" in regards to the virus outbreak.

Liu responded, tagging his American counterpart: "China shared the viral gene sequences at the earliest possible time, while the US shared nothing but groundless blames like 'China's concealment'. Has the US learnt about COVID19 much earlier？Who concealed the information? The world strongly demands an explanation."

The Polish ambassadorial argument reflects a wider polarization in the geopolitical environment – and an increasing readiness from diplomats to use Twitter as a platform for expression, as Trump has done. In mid-March, a tweet from the U.S. president labeled COVID-19 "the Chinese virus" – to which Xu Hong, China's ambassador to the Netherlands, tweeted: “What Trump said is groundless and full of racism, totally ignored the great effort and sacrifice made by Chinese people!”

However, the debate in Poland has become particularly direct. "Poland has become a lens in which one can see the increasingly harsh rivalry between the United States and China. It remains to be seen which one will prove more successful," Paulina Uznanska, deputy head of the Polish Research Center for Law and Economy of China and Marian Fila, a Yenching Scholar at Peking University, wrote in a joint opinion piece for The Diplomat.

READ MORE Is COVID-19 a bioweapon? Here's what the experts say

[This article was updated throughout on 24/5/2020 and an attributed quote added in the final paragraph.]