A woman shows her COVID-19 certificate at a train station in Milan, Italy. /Reuters/Flavio Lo Scalzo

A woman shows her COVID-19 certificate at a train station in Milan, Italy. /Reuters/Flavio Lo Scalzo

· The World Health Organization (WHO) has designated the new Mu variant, B.1.621, first identified in Colombia, as "a variant of interest." The WHO is now monitoring Mu, which it said presents mutations that could make it more resistant to vaccines.

· The European Union has reached its vaccination target set at the beginning of the year, having 70 percent of its adult population now fully vaccinated.

· As of today, the Green Pass – a certification showing proof of vaccination or a recent negative COVID-19 test – will be mandatory in Italy to board trains, ferries and planes. School staff and teachers will also need to show their Green Pass to enter school and university buildings.

· A staggering majority of Europeans living in eastern and southern EU member states felt their families and friends suffered from the pandemic, while those living in northern nations didn't feel nearly as affected, according to a survey conducted by the European Council on Foreign Relations. In the same survey, 64 percent of respondents said they were trustful of their government's response to the pandemic, against 19 percent who felt suspicious and 17 percent who accused their government of using the crisis to increase control over citizens.

· Ireland plans to remove all COVID-19 restrictions by October 22, after 18 months of rolling lockdowns.

· Restrictions on the number of people attending indoor events, closing times for restaurants and bars and the working-from-home order have been lifted across Belgium as of today, with the exception of the capital Brussels.

· Berlin has reopened its world-famous clubs, but only to the vaccinated. It's the last sector to be allowed to reopen in Germany.

· Slovakia has stopped using the Sputnik V vaccine, after having vaccinated more than 18,500 people with the Russian jab. The purchase of 200,000 Sputnik V doses in March caused a political backlash and was met by very low internal demand in Slovakia.

· Google extended the option for its employees to work from home until January 10, 2022, leaving local offices to decide when to call employees back to their desks.

· The risk of developing myocarditis is much higher after contracting COVID-19 than after receiving a vaccine, shows a U.S. study published on Tuesday by the Centers for Disease Control and Prevention.

· After cases dropped for two consecutive days in New Zealand, the country has reported a sharp increase again on Wednesday, with 75 new infections. 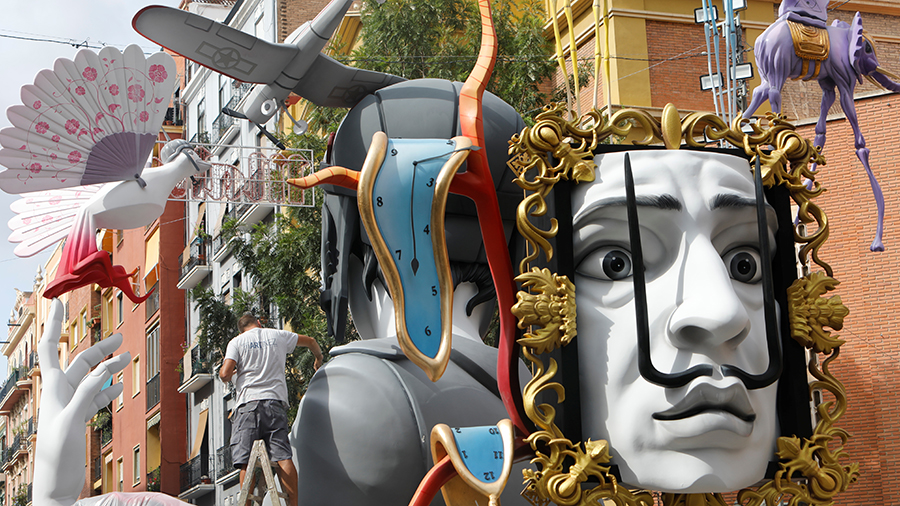 Spain is preparing to celebrate the Fallas festival in Valencia. It could not go ahead in 2020 because of the pandemic. /Eva Manez/Reuters

Spain is preparing to celebrate the Fallas festival in Valencia. It could not go ahead in 2020 because of the pandemic. /Eva Manez/Reuters

There's an expectation of a surge in infections as schools go back in England following the jump in cases in Scotland after pupils returned three weeks ago.

That's brought calls for the government to reintroduce compulsory mask-wearing in secondary schools to slow it down.

The Joint Committee on Vaccination and Immunization is still deliberating whether to offer COVID-19 jabs to all teenagers amid concern about disruption to a fall booster program for older people.

A $30 top-up to Universal Credit introduced during the pandemic is due to be phased out later this month, despite calls from lawmakers to keep it. The government support payment to help with living costs is claimed by more than 5 million households in the UK.

Czechia's COVID-19 restrictions continue to be gradually lifted, with up to 3,000 people allowed to attend cultural and sports events from Wednesday.

At least half of the capacity must be people who are fully vaccinated or have recovered from COVID-19.

The capacity for museums, galleries, castles and zoos is increasing to 100 percent. There are changes for restaurants, with tables able to seat together six people not from the same household, instead of four.

It comes as the new school year begins in Czechia, bringing with it a with a range of COVID-19 restrictions, including mass testing for students.

The country's health minister has said students will undergo three tests at the beginning of the school year – on September 1, September 6 and September 9. Those who refuse testing will be required to wear masks in class. Czech schools fully reopened at the end of May, just weeks before the summer break.

In the meantime, the Republic of Korea has secured 1.5 million doses of Pfizer and Moderna COVID-19 vaccines from Romania. The ROK health ministry made the announcement on Wednesday after weeks of discussion.

Many of Belgium's remaining COVID-19 restrictions are being lifted on Wednesday, but mostly for Flanders and Wallonia.

Certain measures will remain for the Brussels capital region, which has a lower rate of vaccination than others.