Cyrille Tchatchet II is preparing to make history at the Tokyo Olympics – seven years after finding himself homeless and penniless on Britain's streets.

In June, the weightlifter was officially selected for the International Olympic Committee's refugee team in a ceremony co-hosted by IOC President Thomas Bach, making him the first UK-based refugee Olympian.

Tchatchet II will compete in the 96kg weight class on July 31 as part of a 29-strong contingent of displaced athletes in Tokyo.

"I feel like I was brought back to life. It's a dream come true," he told AFP. "I'm proud – it sends a big message of hope and solidarity."

He added: "I feel very excited not just to represent myself but about 80 million displaced people around the world. To represent refugees and the underprivileged will be a big responsibility."

The Cameroonian has a first-class degree in mental health nursing and worked on the front line during Britain's first coronavirus lockdown last March.

'I had to escape'

But his prospects appeared bleak when he first arrived in the UK.

The Yaounde-born athlete competed for Cameroon at the 2014 Commonwealth Games in Glasgow before learning it was not safe for him to return home for reasons he prefers not to reveal.

He fled the team base with just his backpack, some clothes and weightlifting gear and ended up homeless for two months in Brighton, a city in southern England.

"It was a very difficult experience. I had to escape. I was very young, very scared. I didn't think much about the future," he recalled.

Eking out a miserable existence under a bridge with no money, food, or water and suffering from depression, Tchatchet II, haunted by suicidal thoughts, had sunk to his lowest ebb.

A call to The Samaritans, a charity supporting those in emotional distress, pulled him back from the brink. Police removed him from the streets and an asylum application was submitted.

Tchatchet II's mental health continued to suffer as the authorities rejected and reconsidered his application, transferring him to three separate detention facilities during two years.

"When you're waiting for an asylum application, it's a very stressful experience... you always think, 'What are they doing? Are they going to deport me?'"

The sporting success helped alleviate persistent mental struggles. "If you get into exercise, you forget those things. It played a very important part in my recovery," he explained.

Having taken antidepressants for years, Tchatchet II was granted leave to remain in the UK in 2016 and seized the opportunity to study mental health nursing at London's Middlesex University, to emulate the doctors who had helped him.

"In Cameroon, depression isn't even a thing. If you have schizophrenia, they'll probably say you have witchcraft, got into a sect, or are paying for a bad thing you've done," he said.

"Even here [in Britain], there's always that stigma: 'You're a man, you shouldn't have depression.' We need to change our mindsets – it can affect anyone." 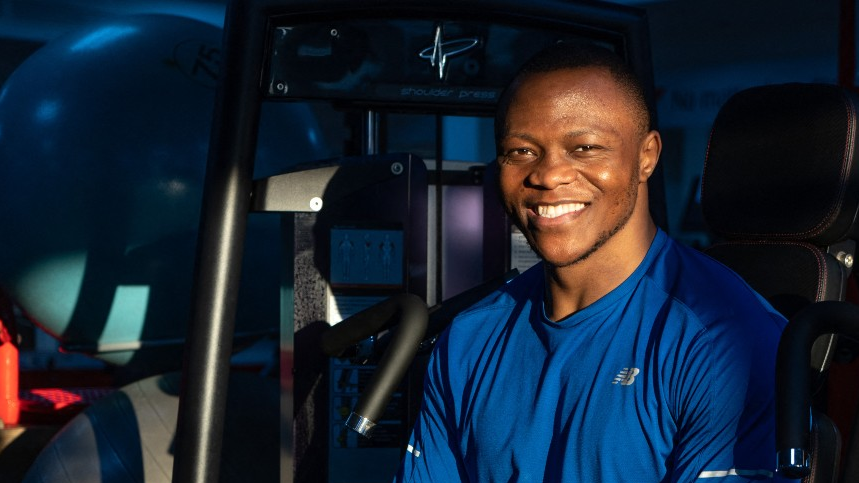 Cyrille Tchatchet II will compete in the 96kg weight class on July 31 as part of a 29-strong contingent of displaced athletes in Tokyo. /AFP//Niklas Halle'n

Cyrille Tchatchet II will compete in the 96kg weight class on July 31 as part of a 29-strong contingent of displaced athletes in Tokyo. /AFP//Niklas Halle'n

Working 12-hour shifts three to four times per week, he dedicated his spare hours to training and was rewarded with an IOC scholarship, opening a pathway to competing at the Olympics.

Tchatchet II, who now works as a community health nurse in London, staffed a mental health ward when the pandemic engulfed Europe in 2020 and highlighted refugees' contributions to their adopted countries.

"Being a refugee doesn't mean you're less important than other people. A refugee is a normal person, a refugee loves his country," he said.

"Being a refugee at the Olympics, or a nurse, sends a strong message to people thinking refugees are coming to take other people's jobs, criminals running away from things."

Tchatchet II hopes to continue his postgraduate studies to become an advanced clinical practitioner. He also hopes to compete at the 2022 Commonwealth Games in Birmingham.

And although not having British citizenship prevented him from competing at the 2018 Commonwealth Games in Australia, he and other refugee athletes now represent much more than their country of birth.